Cellulose nanofibrils (CNFs) have been produced from cellulose by various methods including chemical and physical treatments (Klemm et al., 2011). They have been utilized as a reinforcing material to improve various polymer including starch (Dufresne and Vignon, 1998), polyvinyl alcohol (Bhatnagar and Sain, 2005), chitosan (Nordqvist et al., 2007), and polyurethane (Aksoy et al., 2007).

In the present study, the CNF/sericin composite film was prepared. The effect of homogenization time (i.e., ultrasonication time) and CNF content on the solution turbidity, molecular conformation, and mechanical properties of sericin were examined.

CNFs were isolated from cellulose pulp according to the modified TEMPO oxidation method (Saito and Isogai, 2004). In short, the kraft pulp sample (2 g of cellulose) was suspended in water (150 mL) containing TEMPO (0.025 g) and sodium bromide (0.25 g). The TEMPO-mediated oxidation of the cellulose slurry was initiated by adding 5 mM of 13% NaClO for every gram of cellulose and conducted at room temperature under gentle agitation. The pH was maintained at 10.5 by adding 0.5 mM NaOH. When a decrease in pH was no longer observed, the reaction was considered complete, and the pH was then adjusted to 7 by adding 0.5 M HCl. The TEMPO-oxidized product was filtered, thoroughly washed with water, and physically fibrillated by ultrasonication in a sonicator (Sonosmasher, Jeio Tech, Korea) for 20 min. The suspension was then centrifuged at 5,000 rpm two or three times for 30 min. The supernatant, which was in fact a suspension containing the CNFs, was decanted and collected. The yield of the CNFs was calculated as a percentage of the initial weight of the CNF suspension after drying in an oven at 105 °C. The final concentration of the CNFs was adjusted to 0.1% by weight/volume.

The preparation of silk sericin has been described in a previous study (Jo et al., 2013). Briefly, silk cocoons were immersed at 100°C for 30 min. The liquor ratio was 1:25. The extracted sericin solution was filtered using a non-woven fabric and dried at 80°C in a drying oven to obtain solid sericin.

To evaluate the mechanical properties of the CNF/sericin composite film, breaking strength and breaking elongation were measured using a Universal Test Machine (OTT-03, Oriental TM, South Korea). The tensile tests were performed using a 3 kgf load cell at an extension rate of 10 mm/min for the composite film. The film sample was prepared with a length of 50 mm and a width of 5 mm. The gauge length was 30 mm. All samples were preconditioned at 20°C and 65% relative humidity, and five different CNF/sericin composite films for each sample were used for the measurement.

The presence of a homogeneous dispersion of reinforcing material in a matrix polymer solution is a critical issue, as it determines the improvement of the mechanical properties of the matrix polymer by the reinforcing material (Jonoobi et al., 2010; Wang and Sain, 2007). In this study, the turbidity of the CNF/sericin solution was measured to evaluate the dispersion of CNFs in a sericin formic acid solution as a function of the ultrasonication time. 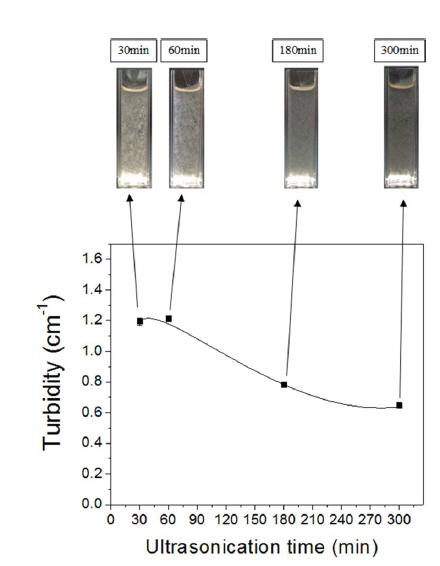 Fig. 1.Turbidity of CNF/silk sericin formic acid solutions with various ultrasonication times (sericin concentration was 2% (w/w); the weight of CNF added was 5% on the weight of sericin).

The molecular conformation of sericin has been widely examined because it affects the mechanical properties of sericin (Jo and Um, 2015). To examine the effect of the ultrasonication time on the molecular conformation of the CNF/sericin composite film, FTIR measurements were performed on the CNF/sericin films produced with different ultrasonication times; the results are shown in Fig. 2. 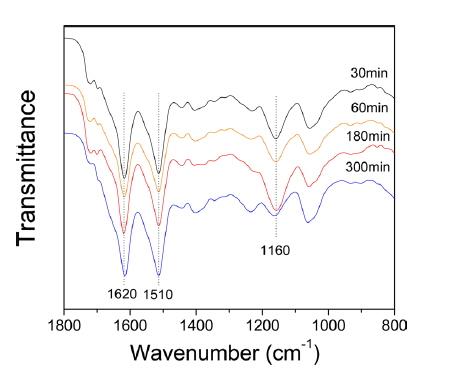 Fig. 2.Fourier transform infrared spectra of CNF/silk sericin film with various ultrasonication times (sericin concentration was 2% (w/w); the weight of CNF added was 5% on the weight of sericin).

Regardless of the ultrasonication time, all CNF/sericin films showed strong IR absorption peaks at 1620 cm-1 and 1510 cm-1 for amide I and II bands, respectively. These peaks are attributed to the β-sheet conformation (Jo and Um, 2015; Jo et al., 2013). Furthermore, the strong IR absorption peak at 1160 cm-1 is attributed to the antisymmetric stretching of the C–O–C bond of cellulose (Sheykhnazari et al., 2011). This indicates the presence of CNF in the films. 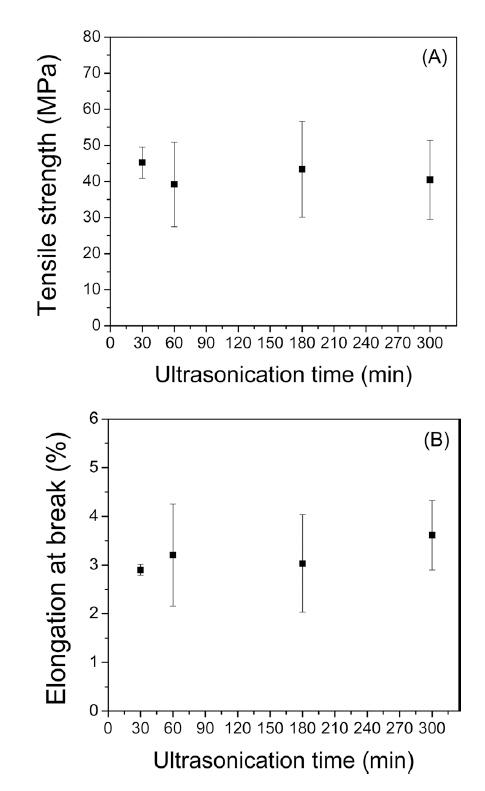 Fig. 3.Mechanical properties of CNF/silk sericin film with various ultrasonication times; (A) tensile strength and (B) elongation at break (sericin concentration was 2% (w/w); the weight of CNF added was 5% on the weight of sericin). 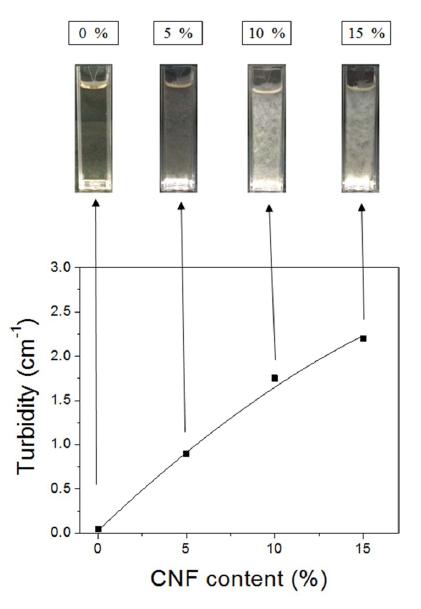 To examine the effect of the CNF content on the molecular conformation of sericin in the CNF/sericin composite film, FTIR measurements were performed, and the results are shown in Fig. 5. The IR absorption peaks at 1620 cm-1 and 1510 cm-1 remained almost unchanged with the CNF content, implying that the β-sheet crystallization of sericin with formic acid casting was not influenced by the amount of CNF content. Conversely, the IR peak at 1160 cm-1 increased by increasing the CNF content, as this peak originated from cellulose, as mentioned in the previous section. 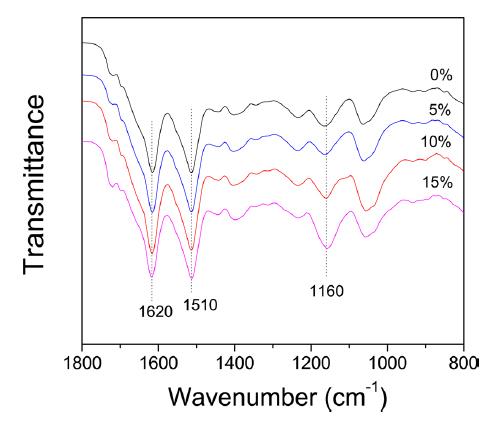 Fig. 6 shows the mechanical properties of the CNF/sericin composite film. Although the 10% CNF content sample showed a slight increase of the tensile strength, a clear improvement in the breaking strength of sericin by addition of CNF cannot be definitely claimed, considering the error range of measurement. As the CNF content increased, the elongation at break increased very slightly. Therefore, the addition of CNF up to a content of 15% did not improve the mechanical properties of the sericin film. 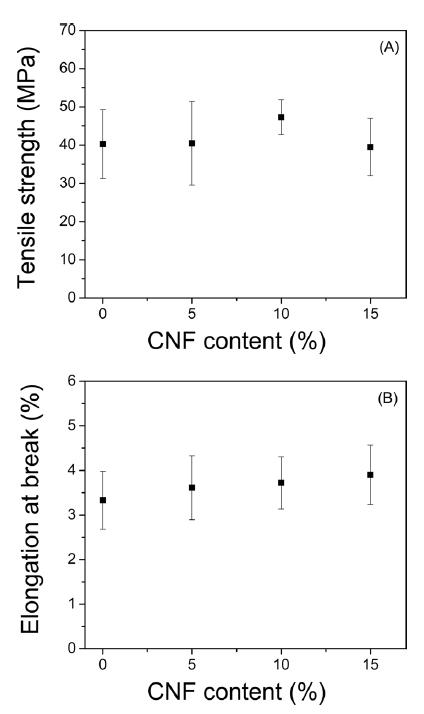