It is difficult to calculate the magnetic force of an object of magnetic material in contact with other objects using the existing methods, such as Maxwell stress tensor method, magnetic charge method, or magnetizing current method. These methods are applicable for force computation only when the object is surrounded by air. The virtual air-gap concept has been proposed for calculating the contact force. However, its application is limited to magneto-static system. In this paper, we present the virtual air-gap concept for contact surface force in the eddy-current system. Its validity and usefulness are shown by comparison between numerical and experimental examples.

Maxwell stress tensor method, magnetic charge method and magnetizing current method are typical ways to calculate the magnetic force. These methods are effective only when calculating the total magnetic force of an isolated object that is surrounded by air. Since the integration path for calculating the force should be taken in the air, it is difficult to compute the force between contacting objects using such existing methods. To solve this problem, the virtual air-gap concept was introduced, and it has only been used for magnetic systems that have large flux leakage without eddy-current [5].

This paper presents an analysis method for the contact force in two different electromagnet models, the I-model and the E-model, in both magneto-static and eddy-current systems; and its effectiveness is verified by experiment.

2. Maxwell Stress with the Virtual Air-gap

In Fig. 1, there is no air-gap between material 1 and material 2. However, we can imagine an air-gap, which exists on the contact surface with distance 0[mm]. That is the basic concept of the virtual air-gap. 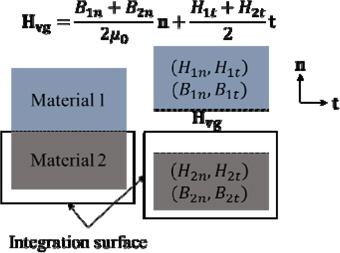 The field intensity inside the virtual air-gap is derived as

In the above expression, Hvg _ from1 and Hvg _ from2 are, respectively,

The virtual air-gap gap field that satisfies the boundary conditions comes from each field in the material 1 and the material 2. In other words, Bn and Ht should satisfy the continuity, respectively.

where, Br is the residual flux density, and M0 is the magnetization of permanent magnet materials [5-7].

Therefore, the Maxwell stress on the contact surface in magnetic system is

Electromagnet models are divided into I-model and E-model according to flux leakage. In contrast to E-model, the large flux leakage occurs in I-model. Two models are designed, and its numerical analysis and experiment are carried out in two systems. One is magneto-static system and the other is eddy-current system.

where 𝕽 is real function and ‘ * ’ is conjugate operator.

3.1.2 Geometry and material properties of the numerical models 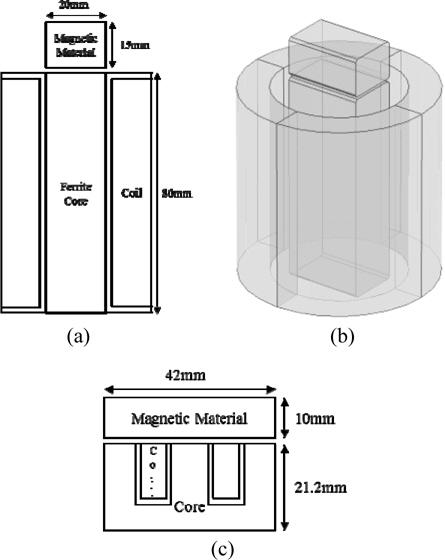 In the eddy-current system, the minimum distance is changed to 0.06[mm] due to the vibration of the iron block.

The input current in each experiment is the same with the numerical analysis.

3.2.2 Geometry and material properties of the experimental models 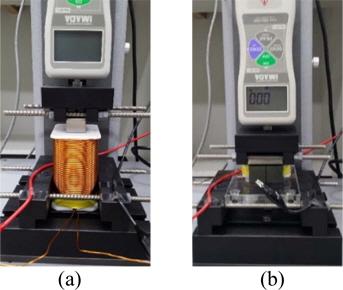 All materials used in experiments and numerical analysis are the same.

The experiment in eddy-current system is as follows. The geometrical setting is the same as for magneto-static experiment. After the zero point is set, the AC input is entered.

It is difficult to measure the force varying with the distance when the force also varies with time. So, the force is measured during 7[s] when the iron block is held at each position. The time average force at each position is calculated using the measured data except for the first and the last second one.

Compare experimental results and numerical results, we show the numerical models are reflected the experimental models well. And compare the contact force computed by the Maxwell stress with the virtual air-gap concept Fvg, the contact force computed by Maxwell stress only Fc and the force at numerical minimum distance Fmn. Through this, we show the validity of virtual air-gap concept.

The distance between the iron block and the electromagnet is d.

The I-model has large flux leakage. So, in this model, the magnetic force slowly increases when the iron block approaches the electromagnet. 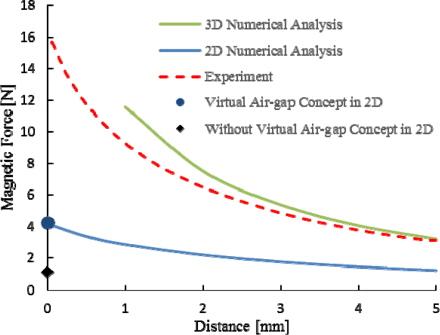 Fig. 6.The magnetic force varying with distance in magneto-static system for the I-model

When the distance is near 1[mm], the ratio between model and 3D model is chosen as 4, which is based on the analysis results.

4.1.2 The I-model in eddy-current system 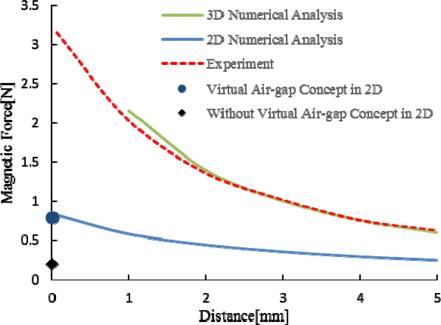 Fig. 7.The magnetic force varying with distance in eddy-current system for the I-model

The small air-gap makes large field change in the E-model. So, the magnetic force rapidly increases when the iron block approaches the electromagnet.

4.2.1 The E-model in magneto-static system 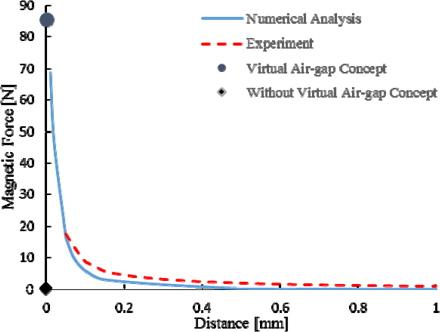 Fig. 8.The magnetic force varying with distance in magneto-static system for the E-model

4.2.2 The E-model in eddy-current system

Fig. 9.The magnetic force varying with distance in eddy-current system for the E-model

4.3.1 The system energy and the continuity of the force 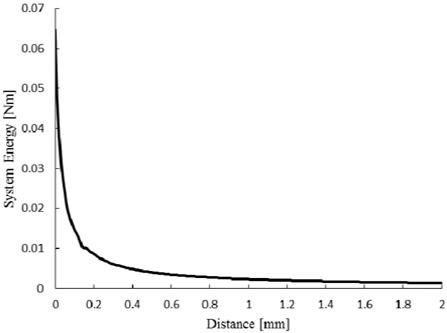 Fig. 10.E-model system energy in eddy-current system according to distance 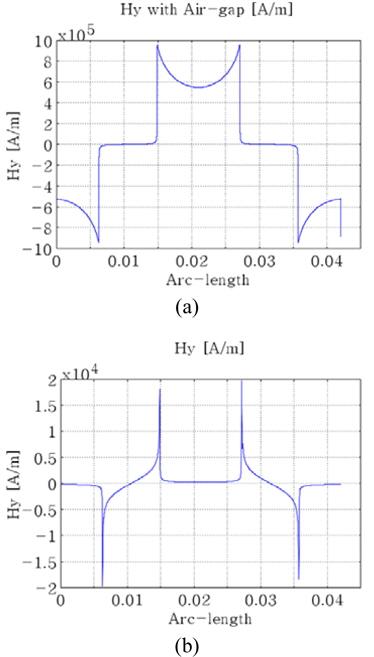 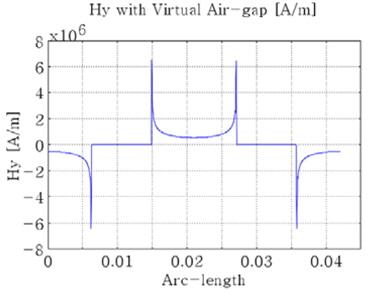 In the analysis models, the magnetic force increases as the gap between the electromagnet and the iron block becomes smaller. The force varies continuously when the system energy change smooth. However, the discontinuity occurs in the analysis results obtained using only the existing Maxwell stress tensor when the contact force is compared with the force with the minimum gap. It comes from the Maxwell stress which is only defined in air.

Therefore, the virtual air-gap concept is a tool that should be used to calculate the contact force for not only magneto-static systems but also eddy-current systems in various shapes.