Effect of Colchicine on Chromosome Doubling in Codonopsis lanceolata

Codonopsis lanceolata is a perennial creeper of the Campanulaceae, that is used for food or medicine. The root of C. lanceolata contains substances such as saponin, vitamin, B1, B2, and inulin, which are reported to have effects on vigor, cough, and blood pressure (Moon, 1984) and also used as a crude drug substitute for ginseng (Chang et al., 1987). Recently, functional substances of medicinal plants have been attained increasing attention as a result of economic development and health-oriented lifestyle, but research on breeding and cultivation method to increase yields is still limited.

Polyploid organisms have multiplied sets of the same genomes, and in comparison to diploids, there is no qualitative change in genetic information, but, because of the quantitative increase of genetic materials, formative and physiological characters of the plant change (Kwon et al., 2013; Lapin, 1975). Artificial induction of tetraploid plants is generally achieved based on colchicine concentration, treatment time, and treatment method (Kim et al., 2003; Suh, 2005).

Colchicine is an alkaloid (phytotoxic) component contained in the seed or bulb or Colchicum autumnale, which is a plant of the Liliaceae, and, when united with tubulin during mitosis of a plant. It suppresses formation of spindle fibers and, in the middle stage of cell division, interferes with chromosome movement to poles and microtubules formation, inducing polyploidization of chromosomes (Hadlaczky et al., 1983). In addition, colchicine has been used to good effects in numerous plants that have been reported earlier (Hancock, 1997). The effect of colchicine for in vitro chromosome doubling is different regarding to its concentration, method and duration of treatment, and also genetic factors of the treated plants (Aina et al., 2012; Dhooghe et al., 2011; Moghbelt et al., 2015).

In general, tetraploid plants have larger organs or stems (Cockerham and Galletta, 1976; Lapins, 1975) with thicker and longer stems and larger leaves and flowers. As a result of polyploidization, contents of secondary metabolites such as saccharide in sugar canes, vitamin C in tomato and apple, and nicotine in tobacco leaf, change, and, sometimes, physiological characteristics such as virus resistance in radish (Hahn, 1969) and freezing resistance in mulberry tree (Park, 1994) have attempted to improve prominently.

Polyploidy provides the opportunity for selection to sculpt a variety of new gene functions, traits, and lineages and polyploidy may increase the amounts of secondary metabolites (Thao et al., 2003) in medicinal plants of which functional compounds are accumulated in the vegetative parts of plants (Gao et al., 1996; Nilanthi et al., 2009; Young et al., 2015). So polyploid breeding is an effective approach of germplasm development for medicinal plants. Previous study focused on doubling the chromosome number of diploid as well as haploid plants, and the regenerated tetraploid plants showed a pronounced growth characteristic when the plants were treated with colchicine (Nilanthi et al., 2009). Polyploids may also have enhanced ornamental characteristics in some cases (Kehr, 1996) and tetraploid plants exhibited significant differences regrading morphological and cytological alteration in Platycodon grandiflorus when the plants were exposed to colchicine treatment (Wu et al., 2011).

To the best of our knowledge, the effects of colchicine on chromosome double have not been performed in Codonopsis lanceolata, previously. In the present study, successful induction of tetraploid plants of C. lanceolata was reported and focused on potential methodology for the efficient recovery of such polyploid plants through the in vitro application of colchicine. As well as establishing the ploidy of these plants, the growth habit and morphological characteristics of the tetraploids were examined with the ultimate aim of improving productivity and breeding of C. lanceolata.

Seeds of C. lanceolata grown in Jeju and harvested in 2015 were sown in in vitro sterile environment, and an explant from the cultivated plant was used as an experimental material. For seed treatment, 20 ㎖ of 0, 0.05, 0.01, 0.5, and 1.0% colchicine aqueous solutions were put in 9 ㎝-diameter petri dishes, on which two sheets of filter paper were placed each, and 50 grains of seeds were soaked in them. To accelerate germination, they were left for 3, 6, 12 and 24 hours at 5℃. The treatment was repeated three times each. After the soaking treatment, each seed was cleaned three to four times by using sterilized water, and sown in ridging for which vermiculite and peat moss were mixed at 1:1 ratio before forcing the germination in a 25℃ thermostatic chamber. Germination was examined when a cotyledon appeared, and, when 6 or more foliage leaves appeared, the leaves were collected to check polyploidy. Also, for colchicine treatment of the in vitro embryoid, explants (1 ㎝) of C. lanceolata were soaked in 40 ml of 0.01, 0.05, and 0.1% colchicine aqueous solutions in 100 ㎖ beakers for 1, 6, and 12 hours. After the soaking treatment, each explant was cleaned with sterilized water three to four times, and plated in the MS medium. The treatment was repeated nine times each. For cultivation, at 25±1℃, 40 μmol·m-2·s-1 light intensity was applied for 16 hours.

Determination of number of chromosomes

About 1 ㎝ of the root apex of milk white color in fresh, of C. lanceolata was collected and pre-treated with 0.05% colchicine solution for two to three hours at room temperature, before fixing it with 95% ethanol and glacial acetic acid mixed solution (3:1) in a refrigerator. The sample was soaked again in 1N HCI solution, and after hydrolysis in a water tank, it was adjusted to 60℃ with RPM 120. Then, it was soaked in 2% aceto-orcein solution before examining the number of chromosomes by using an optical microscope.

Influence of concentration of colchicine on chromosome doubling and seed germination

Table 1.Effect of colchicine on chromosome doubling and germination of Codonopsis lanceolata seeds 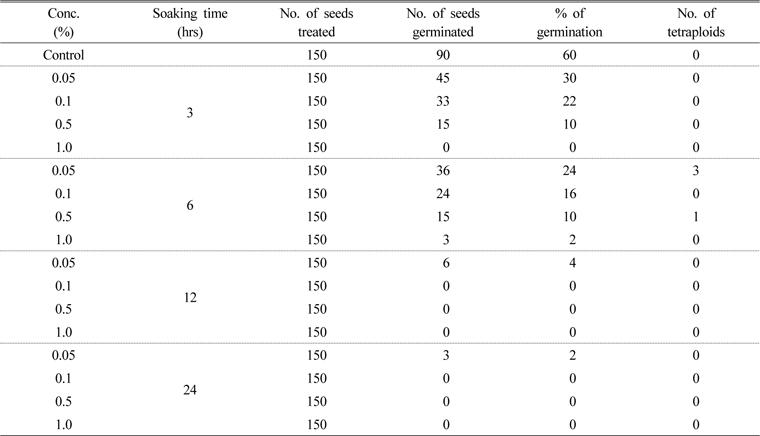 A significant difference was noted between control and treated seeds of C. lanceolata when the seeds were subjected to colchicine. Colchicine application reduced significantly the germination percentage of C. lanceolata. Similar type of findings were obtained by Sourour et al. (2014) and Bakry et al. (2007) on Hordeum vulgare L. and Vicia narbonensis respectively. Previous study demonstrated that colchicine in high concentration had very effect on germination of seed and survival plants recovered in medicnal plant, Salvia hains (Grouh et al., 2011).

Although, in general, tetraploid plants showed potential growth characteristics than diploid that have been reported earlier (Tan and Dunn, 1973; Esen et al., 1978), but, the observation of the present study is contradictory with that result. However, there was no difference in the leaf width and length between the tetraploid and diploid, but interestingly the number of leaves was halved in the tetraploid (Fig. 1, Table 2). The size of the stroma was about 1.3 times larger in the tetraploid than the diploid. This finding showed consistency with the results found in mulberry tree (Park, 1994), lettuce (Eenink and Alvarez, 1975), and other plants.

Fig. 1.Chromosomes in diploid and tetraploid of Codonopsis lanceolate.

Fig. 3.Comparison of morphology and root characteristics between diploid (A) and tetraploid (B) of Codonopsis lanceolata.

Growth characteristics between in vitro-cultured diploid and tetraploid Codonopsis lanceolata

Fig. 4.Comparison of morphological characteristics between in vitro cultured diploid (A) and tetraploid (B) of Codonopsis lanceolata.

This study concluded that C. lanceolata is more effective to apply in vitro cultured colchicine treated explants, which has active cell division, than directly to seeds, in order to induce tetraploid plant bodies, and it can be used as an effective method for breeding tetraploid of C. lanceolata.