The Korean Society for Computational and Applied Mathematics (한국전산응용수학회)

where ρ > 0 is a penalty parameter. Obviously, it is not a smooth function. In many studies, another popular penalty function for (P) is defined as:

In this paper, we aim to smooth l1 exact penalty function of the form (1). First, we define a function pϵ(t) as follows:

It is easy to prove that pϵ(t) is continuously differentiable on R. Using pϵ(t) as the smoothing function, a new smoothing approximation to l1 exact penalty function is obtained, based on the smoothed penalty function obtained thereafter an algorithm for solving COP is given in this paper.

where ρ > 0. The corresponding penalty optimization problem to F(x, ρ) is defined as

where ϵ > 0 is a smoothing parameter.

Remark 2.1. Obviously, pϵ(t) has the following attractive properties: pϵ(t) is continuously differentiable on R and . 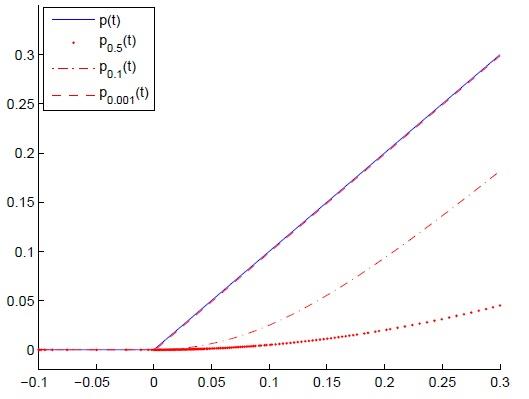 Consider the penalty function for (P) given by

A direct result of Lemma 2.1 is given as follows.

where f∗ is the optimal objective value of (P).

Therefore, we obtain that

This completes the proof. □

that is, x′ is an approximate optimal solution to (P).

Proof. Since x′ is ϵ-feasible to (P), it follows that

As x∗ is a feasible solution to (P), we have

In this section, using the smoothed penalty function Fϵ(x, ρ), we propose an algorithm to solve COP, defined as Algorithm 3.1.

In practice, it is difficult to compute . We generally look for the local minimizer or stationary point of Fϵj (x, ρj) by computing xj+1 such that ∇Fϵj (x, ρj) = 0. For x ∈ Rn, we define

Then, the following result is obtained.

Theorem 3.1. Assume that . Let {xj} be the sequence generated by Algorithm 3.1. Suppose that the sequence {Fϵj (xj , ρj)} is bounded. Then {xj} is bounded and any limit point x∗ of {xj} is feasible to (P), and satisfies

Proof. First, we will prove that {xj} is bounded. Note that

and by the definition of pϵ(t), we have

which results in a contradiction since the sequence {Fϵj (xj , ρj)} is bounded. Thus {xj} is bounded.

We show next that any limit point x∗ of {xj} is feasible to (P). Without loss of generality, we assume that . Suppose that x∗ is not feasible to (P). Then there exits some i ∈ I such that gi(x∗) ≥ α > 0. Note that

Theorem 3.1 points out that the sequence {xj} generated by Algorithm 3.1 may converge to a K-T point to (P) under some conditions.

Numerical results of Algorithm 3.1 for solving (COP1) are given in Table 1.

Therefore, we get an approximate solution

at the 3’th iteration. One can easily check that x3 is a feasible solution since the constraints of (COP1) at x3 are as follows:

It is easy to see from Tables 2 and 3 that the convergence of Algorithm 3.1 is the same and the objective function values are almost the same. That is to say, the efficiency of Algorithm 3.1 does not completely depend on how to choose a starting point in this example.

Note: j is the number of iteration in the Algorithm I.

Thus problem (COP2) is equivalent to the following problem: