Smartphone has become an important tool for everyday life. As smartphone adopt leading edge technologies, it is expanding its functions to encompass other digital equipments such as digital camera, media player, and global positioning system unit. Its powerful functions are rapidly pulling in millions of users. The Ministry of Science, ICT and Future Planning of Korea (MSIP) reported that the number of smartphone users had jumped to about 40 million people, which is 69% of mobile communication service users, current at the end of 2014 [1]. Although smartphone penetration is going up among all age groups, young people growing up in digital era are especially leading the way. The spread of smartphone in young people is not a special phenomenon for one country but common in many countries over the world. According to the consumer report of Nielsen, the rates of smartphone users from 16 to 24 years old are the highest in 7 countries, and second in 2 countries among 10 countries surveyed [2].

Previous researches indicated that smartphone addiction might result in social and economic problems as well as physical and psychological problems. In social and informative aspects, smartphone addiction was considered to have the problems of information leaking, blind trusting, unbalancing of relationship, increasing of harmful information [6], and hindering sociality development [7]. Also, problematic use of mrtphone may disturb studies and business, and result in financial problems [4], [8].

Visual Display Terminal Syndrome (VDTS) is another problem of excessive smartphone use. VDTS occurs when an individual looks at the screen for a long time during long hours of using computer. The symptoms of VDTS include tiredness of eyes, decrease of visual acuity, headache, shoulder discomfort, and turtle neck syndrome [10].

Specific postures at the visual display terminal (VDT) workstation were significantly related to the severity of musculoskeletal symptoms in the shoulders, neck, and upper back [11]. For example, a seated posture and distance from operator is associated with a risk of musculoskeletal symptoms and disorders [12]. Physical symptoms increase with duration of daily VDT use without threshold, while mental and sleep related symptoms increase with VDT work of more than five hours per day [13]. The VDTS subjective symptoms and degree of severity differed from whether the students were computeraddicted or not. In all symptoms, which include general, musculoskeletal, eye related, and mental symptom, the mean subjective symptom score was higher in the addicted group than in the non-addicted group [14].

In the same manner, using smartphone for a long time can lead musculoskeletal problems caused by holding smartphone with hand, and also bring visual fatigue and weak vision due to keeping an eye on small display. As smartphone has relatively small screen in size, the using posture might be more harmful to body than that in which a user looks at display terminal of computer. Moreover, VDTS caused by smartphone might have more negative effects especially on adolescents because their physical growth and development has not ended. However, in the previous researches [12], [13], VDTS have been studied subjecting those who work in offices with computers screen. So the association between VDTS and smartphone overuse is not well-established.

The students enrolled in eight schools or universities in Korea were recruited by convenience sampling and total 540 students volunteered in this study. Minimum sample size was calculated using G*power 3.1 software. With an alpha of .05, power of .95, effect size of .25, and three groups, number of valid samples was required more than 252. The sample size of 540 students was larger than necessary.

The university institutional review board (IRB) granted approval for this study (EU 13-14). The purpose of the study, confirmation of anonymity, and voluntary participation were explained to the principals of the schools and the students. Before the survey, written consents were obtained. The students were also informed that there would be no disadvantages to nonparticipants and that the collected data would be used for only research purposes.

2.3.1 Adolescent: Although there are several definitions of adolescent, we followed here with the definition provided by the Framework Act on Juveniles of Korea. In this study, adolescent was defined as the people whose ages range from 13 to 24 years.

2.3.3 Subjective symptoms of VDT syndrome: VDTS symptoms were assessed using VDTS Symptom Scale, a selfreport questionnaire developed by Moon et al [10]. In their study, VDTS symptom was divided into five subdomains: eyerelated, psychological, general body, musculoskeletal, and skin-related symptom. VDTS Symptom Scale consists of 33 items, which made up with 11 eye-related items, 7 psychological, 7 general body, 5 musculoskeletal, and 3 skinrelated items, with 5 point Likert scale from 0(no) to 4(very severe). The higher score means higher level of VDTS symptom. The Cronbach’s alpha coefficient for the previous study was .96 [11], and that of the current study was .95.

2.3.4 State anxiety: State anxiety was measured using the Spielberger State-Trait Anxiety Inventory (STAI-X-1), a selfreport questionnaire revised by Kim [18]. STAI-X-1 consists of 40 items, each of which is measured on a 4-point Likert scale ranging from 1 (no) to 4 (very severe). In this study, only state anxiety was assessed with 20 items of STAI-X-1 since state anxiety changes over time and reflects a person’s immediate perceived feeling of tension [19]. The higher score means higher level of state anxiety. The Cronbach’s alpha coefficient for the previous study was .87 [18], and that of the current study was .87.

As the data did not follow normal distribution, the Kruskal-Wallis test was used to compare the subjective VDTS symptoms and state anxiety in accordance with the level of smartphone addiction. The Mann-Whitney U test was carried out as a post hoc analysis. Statistical significance was set at p < .05, and Bonferroni correction was applied to adjust the significance level for post hoc analysis. Data analyses were performed with SPSS version 22.0 (IBM SPSS Statistics, Chicago, IL, USA).

Table 1.General characteristic of the subjects 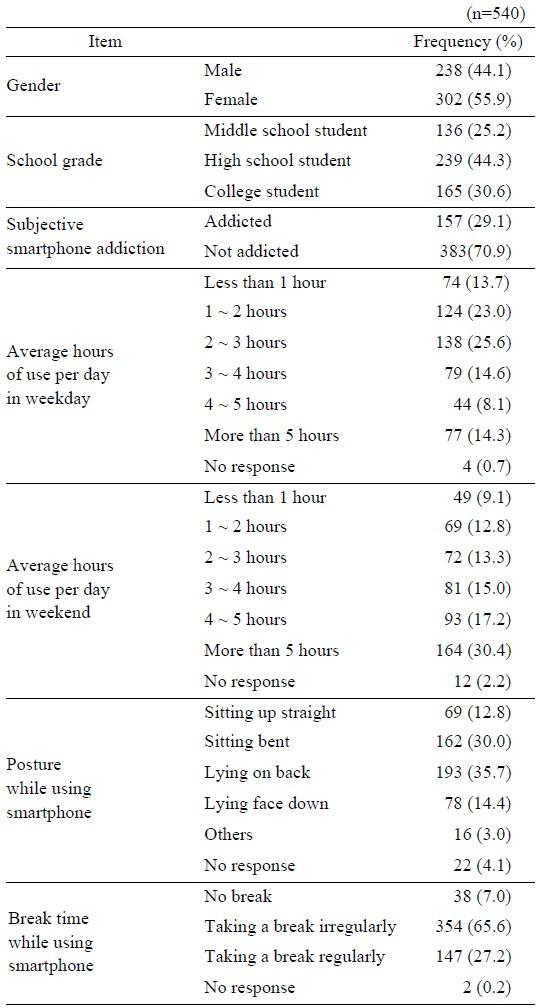 Regarding the posture during smpartphone use, 35.7% chose ‘lying on back’ while only 12.8% answered that they sit straight. When they use smartphone, 65.6% had break time irregularly and 7.0% did not have break time at all.

When the subjects were divided into three smartphone user groups by addiction level, which consisted of normal group and two problematic groups which were high-risk group and at-risk group, 184 subjects were found to be problematic groups and they can be classified into 33(6.1%) high-risk users and 151(28.0%) at-risk users. There were significant differences in smartphone addiction level among smartphone user groups by gender (p<.001), school grade (p<.001), and daily using time in weekday (p<.001) and weekend (p<.001) (Table 2). 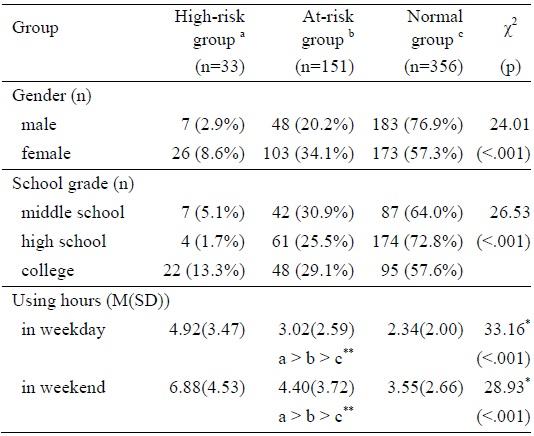 3.3 The agreement of subjective and measured smartphone addiction

The Kappa coefficient in table 3 indicated that the agreement between subjective and measured addiction was poor (k =.12, p<.001). When we measured the level of smartphone addiction by SAPS, 34.1% fall into addicted group such as high-risk and at-risk group while 29.1% of the subjects answered that they were addicted. Among the addicted group based on SAPS measurement, 60.3% recognized their addiction but 39.7% did not (Table 3). 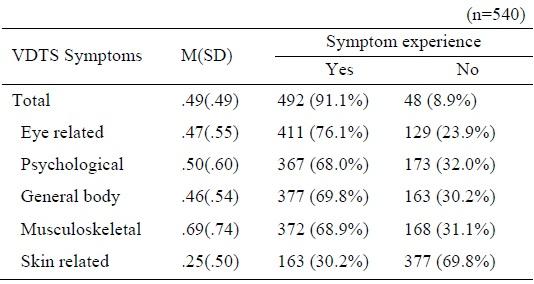 Regarding the breaking and the posture during smartphone use, the users having breaking irregularly had significantly higher VDTS symptom scores than the users having breaking regularly (χ2=12.88, p=.002), and VDTS symptom scores was the highest in ‘sitting bent’ group followed by ‘lying face down’ group and ‘lying on back’ group while ‘sitting up straight’ group had the lowest score (χ2=38.04, p<.001).

The percentage of problematic group was the highest in college students followed by middle school students and high school students. This finding was little different from the survey result of the MSIP that points out addiction rate tends to decrease in older users [22]. This difference might come from the different age grouping of the participants. The MSIP grouped the participants based on age and classified college students into 20s group while this study grouped by school grade and put college students into independent group. However, considering the MSIP’s survey also found that the percentage of 20s in problematic users was 28.7% [22], college students might show weakness to smartphone addiction.

The subjects seemed to not have experienced VDTS symptoms very seriously, but most subjects had experienced at least one of the symptoms. The high-risk group especially had experienced VDTS symptoms more frequently than other groups. This finding supported the previous studies showing that computer addicted group perceived more VDTS symptoms than non-addicted group [14]. This was also linked to several studies on VDTS. Kim et al pointed that the excessive use of mobile phones and video media caused weak vision [25] and Choi reported that most smartphone users complained eye strain [26], and Kang et al found that long use of visual display terminal could lead to musculoskeletal problems [27]. It was suggested that problematic smartphone use may cause various VDTS symptoms and smartphone use guidelines for adolescents should be developed as well.

Among VDTS symptoms, eye-related symptom was the most commonly experienced but the severity of symptom was the highest in musculoskeletal symptom. This reflects the characteristics of smartphone. Smartphone is smaller in size compared to traditional VDT and does not have stand body for screen. Due to these characteristics, users have to hold smartphone with their hands while they look at the small screen. This posture might cause the increase of severity in musculoskeletal symptom. Moreover, the subjects of this study used smartphones at an average of 2.69 hours on the weekdays and 4.00 hours in the weekend mostly in ‘sitting bent’ and ‘lying on back’ posture. Therefore, since long hour of smartphone use and improper posture raise VDTS symptom, the education for adolescents will be necessary.

Considering the users having breaks regularly had lower severity in VDTS symptom, breaks during smartphone use should be emphasized and included in the guideline for the prevention of smartphone addiction to alleviate musculoskeletal symptom as well as eye related symptom. The recommendation of the Ministry of Employ and Labor regarding the breaks, which is that the users must take at least 10 minutes of rest per every hour they use VDT [28], could be referred to the guideline for smartphone use.

This study was carried out to examine smartphone addiction, VDT symptoms, state anxiety and their relationship in adolescents to provide empirical evidence for development of smartphone addiction prevention and treatment program. The results showed that the rate of problematic users was found to be higher in female than male and was the highest in college students followed by middle school students. As considerable number of problematic users understood that they were normal, there were the gaps between the selfreported addiction assessment and the measured addiction assessment. Therefore, the objective assessment would be necessary to help adolescents identify themselves correctly.

The level of the VDT related symptoms was not serious in this study but most subjects experienced more than one symptom. The state anxiety was found to be higher in highrisk group than in at-risk group and normal group. These findings suggest that the prevention and intervention program would be helpful to enhance both physical and mental health of adolescent smartphone users.

This study provides evidences that problematic smartphone use is related to VDTS symptom experiences and increase of state anxiety. However, as the subjects of this study were recruited in limited area, there were difficulties in the generalization of the study results.