Reactive oxygen species (ROS) are important second messengers for the induction of various genes in a variety of physiological and pathological conditions. Mammals and most chordates express three distinct isoforms of superoxide dismutase (SOD). SOD1 (Cu/Zn-SOD) is located predominantly in the cytoplasm and contains copper and zinc, whereas SOD2 (Mn-SOD) is located in the mitochondrial matrix of cells and contains manganese in its active site. The third form of SOD, extracellular SOD (EC-SOD), contains copper and zinc in its active site and is present in extracellular matrix fluids, such as plasma, lymph, and synovial fluid, (1). Previous studies have revealed the key roles of SOD isozymes in various physiological and pathological processes (2). A number of studies have implicated SODs in the modulation of tumor cell proliferation and apoptosis (3,4). Recently, adenoviral expression of EC-SOD was found to efficiently suppress the growth of melanoma and breast carcinoma cells (5,6). Furthermore, it has been demonstrated that inflammatory cytokines such as IFN-γ, IL-4, and IL-1α, up-regulate the expression of EC-SOD protein and mRNA in human skin fibroblasts and vascular smooth muscle cell (7,8). Conversely, EC-SOD is down-regulated by both TNF-α and TGF-β (7,8). However, the specific molecular mechanisms remain to be investigated, particularly with regard to IFN-γ-induced EC-SOD expression.

IFNγ is implicated in a variety of biologic functions, including anti-tumor effects, induction of cell differentiation, and regulation of gene expression (9). The participation of protein kinase C (PKC) isoenzymes in the regulation of IFNγ-induced responses has been reported in various systems (10,11). The PKC families, including cPKC (α, βI, βII, and γ), nPKC (δ, ε, η, and θ), and aPKC (ζ and λ/ι), are involved in the regulation of cell proliferation, differentiation, and apoptosis (12). PKCα and PKCε have been primarily associated with anti-apoptotic effects in various systems (13,14) whereas PKCθ and PKCδ have been implicated in pro-apoptotic cascades (15,16). Furthermore, it has been reported that the anti-tumor effect of IFNγ is via the PKCδ pathway (17). Thus, a reduction in the level of PKCδ protein or activity may be important for tumor formation.

Up-regulation of EC-SOD expression by IFNγ

It has been reported that IFNγ induces EC-SOD expression (8). Because PKCδ is regulated by the IFN signaling pathway and is implicated in the regulation of cellular processes, including the cell cycle and apoptosis (17,18), we hypothesized that IFNγ might influence EC-SOD expression by inducing PKCδ activation. We found that EC-SOD expression was up-regulated in IFNγ-treated melanoma cell lines (A375). To investigate the effects of IFNγ on EC-SOD gene expression, A375 cells were treated with exogenous IFNγ. The treatment drastically elevated the expression levels of EC-SOD protein; IFNγ-induced EC-SOD up-regulation was inhibited by transfecting dominant-negative PKCδ (DN-PKCδ) in these cells (Fig. 1A). We next examined the effect of IFNγ on EC-SOD expression in human squamous carcinoma cells (A431) and keratinocytes (HaCaT). EC-SOD expression was up-regulated in both cell lines after either IFNγ stimulation or PKCδ transfection; this up-regulation was suppressed following treatment with bis-indolylmaleimide-I (Bis-I; a PKC inhibitor) or transfection with DN-PKCδ (Fig. 1B). We investigated whether overexpressed EC-SOD was enzymatically active by measuring its ROS scavenging activity. The ROS scavenging activity of EC-SOD was increased after PKCδ transfection and/or IFNγ stimulation, and these activities were decreased upon treatment with Bis-I or transfection with DN-PKCδ in A375 cells (Fig. 1C). These results indicate that the up-regulation of EC-SOD expression is mediated by either the IFNγ/PKCδ or PKCδ pathway and the that effect is not cell-line dependent.

PKCδ is activated by IFNγ through the Janus kinase/signal transducer and activator of transcription (JAK/STAT) pathway and is associated with ROS production in a nicotinamide adenine dinucleotide phosphate oxidase-dependent manner in phagocytic cells (17,19). Therefore, we postulated that PKCδ might up-regulate the expression of EC-SOD. To confirm this, we first stimulated A375 cells with phorbol 12-myristate 13-acetate (PMA) to activate PKCδ. EC-SOD expression could be detected in quiescent cells, whereas PMA stimulation dramatically increased the levels of EC-SOD protein and mRNA (Fig. 2A and B). However, EC-SOD expression in these cells was inhibited upon treatment with Bis-I and transfection with DN-PKCδ (Fig. 2C and D). These results suggest that PKCδ is an important mediator in the up-regulation of EC-SOD expression, because both IFNγ and PMA can activate PKCδ by distinct pathways. 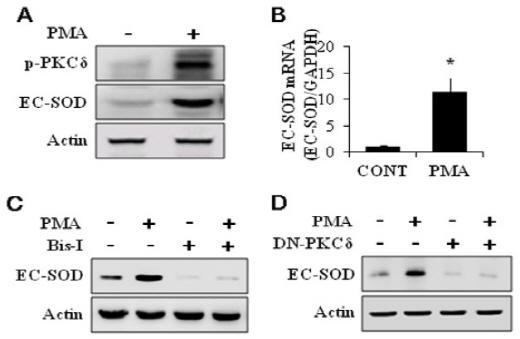 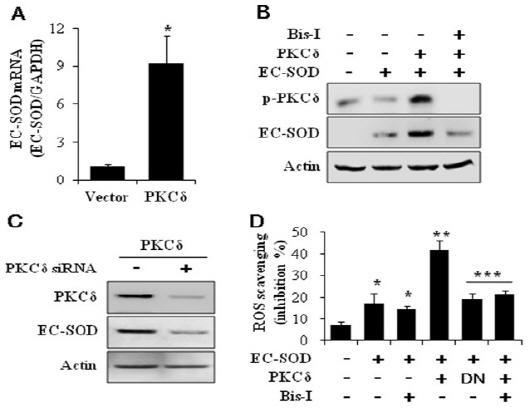 We further investigated the effect of EC-SOD on cell proliferation because previous studies stated that EC-SOD inhibits the growth of certain types of cancer cells (5,6). To assess cell proliferation, we performed the trypan blue exclusion assay after transfection with either empty vector or EC-SOD plasmid in various cell lines. EC-SOD transfection or IFNγ stimulation decreased the number of viable cells in all of the tested cell lines, and this proliferation inhibitory effect was increased by treatment with IFNγ in EC-SOD-transfected cells (Fig. 4A). We used PI staining to determine whether the inhibited proliferation resulted from cell cycle arrest. Fig. 4B shows that the transfection of EC-SOD plasmid induced G0/G1 cell cycle arrest. To investigate whether apoptosis occurs after EC-SOD plasmid transfection, a Western blot analysis was done using A375 cells. The expression of p21 was up-regulated by EC-SOD, which inhibits cell cycle progression. Furthermore, EC-SOD suppressed the expression of cyclins A and D, which regulates cell cycle progression. On the other hand, the level of pro-apoptotic molecules, Bax, Bad, and cleaved caspase-3, was not changed by the transfection of EC-SOD plasmid (Fig. 4C). Treatment with IFNγ also increased p21 and Rb but decreased Cyclin A and D like EC-SOD plasmid transfection, confirming that the anti-tumor effect of IFNγ might be mediated by EC-SOD (Fig. 4D). These results suggest that EC-SOD inhibits cell proliferation through cell cycle arrest by up-regulating the cyclin-dependent kinase (CDK) inhibitor protein and down-regulating cell cycle progression proteins without affecting apoptotic signaling. 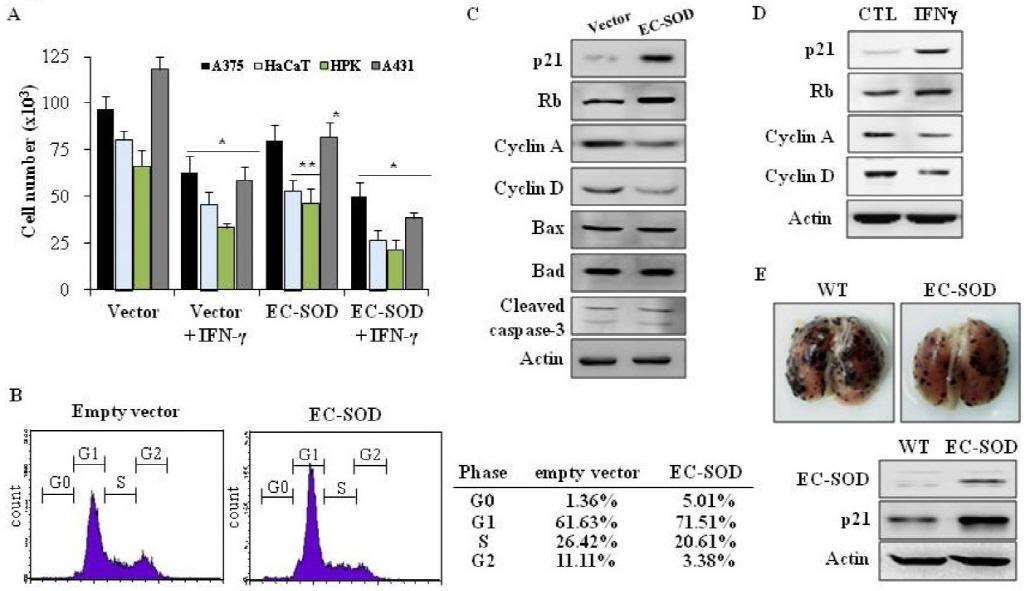 To evaluate the effects of EC-SOD on tumor cell growth in vivo, we injected B16F10 mouse melanoma cells into the tail veins of EC-SOD transgenic mice, and quantified the number/size of metastatic melanoma nodules on the surface of the lungs. On day 14 following B16F10 injection, nodule growth drastically decreased in the lungs of the EC-SOD transgenic (EC-SOD TG) mice. However, the number of melanoma nodules in EC-SOD-TG mouse lungs did not significantly differ from the control mice. Moreover, the expression of p21 was increased in EC-SOD TG mice (Fig. 4E). Therefore, we concluded that EC-SOD mediates its inhibitory effects on cell proliferation and tumorigenesis via cell cycle arrest by up-regulating p21 expression.

EC-SOD is generated by many tissues, playing a significant role in vascular pathologies, hypertension, and metastases (1,20). Overexpressed EC-SOD inhibits tumor formation and cell proliferation in various types of cancer cells (6,21), suggesting that EC-SOD may function as a new type of tumor suppressor.

It has been observed that EC-SOD levels are significantly elevated in IFNγ-treated fibroblasts (7,8), and IFNγ has been implicated in the regulation of PKCδ as a tumor suppressor. These findings imply that downstream substrates of PKCδ could be targets for therapeutic intervention in cancer (17,18,22). We have explored the hypothesis that PKCδ communicates with cell growth inhibition machinery via the activation of EC-SOD. We showed that the EC-SOD overexpressed by PKCδ inhibits cell proliferation through cell cycle arrest. We further determined that p21 levels were significantly elevated in EC-SOD-over-expressed cells, whereas cyclin D levels were decreased. In addition, EC-SOD suppressed melanoma growth via an increase in the expression of p21 in EC-SOD TG mice.

p21 has been found to be a major target of p53; it was initially thought that p21 would be of similar importance in human cancers. Additionally, overexpression of p21 inhibits cancer cell proliferation in mammalian cells and can inhibit all cyclin-CDK complexes. Accordingly, it is possible to develop reagents targeting p21 to achieve beneficial effects in cancer therapy. Although the significance of p21 has been investigated in several different cancers (lung, gastric, head and neck, and ovarian), clinical effects have been mixed. Several anticancer agents such as statin (23), cisplatin (24), and NS-398 (25) and B_lapachone (26) exhibit profound anti-proliferative effects via p21 induction and are being investigated for their anti-tumorigenic activities. However, these DNA-damaging agents have major side effects on proliferating tissues and may lead to secondary cancer due to an induction of further mutations in precancerous and healthy cells. Therefore, greater understanding of the molecular mechanisms of EC-SOD should help improve anti-tumor efficacy and decrease the side effects of cancer therapy. Recently, we determined that EC-SOD might bind to kinases. Thus, it is possible that EC-SOD modulates gene expression by regulating kinase activity. Much further research is needed to address this last question.

In summary, we identified the mechanisms by which PKCδ inhibits cell proliferation and melanoma tumorigenesis. EC-SOD was up-regulated in a PKCδ-dependent manner and inhibited cell proliferation via cell cycle arrest through the p21 pathway. Therefore, our findings regarding PKCδ-induced EC-SOD expression and its downstream signaling cascade might be used to identify potential targets for cancer therapy.

Transient transfections were performed using a Qiagen kit from Qiagen (Santa Clara, CA, USA) according to the manufacturer’s protocol. The transfections were allowed to proceed for 24 h, and the transfected cells were washed with 4 ml phosphate buffered saline (PBS) and stimulated with IFNγ. The cells were continually cultured in DMEM and finally harvested. The PKCδ plasmid was provided by Jae-Won Soh (Inha University, Korea)

The EC-SOD plasmid was transfected into 293E cells with or without the PKCδ plasmid. After 24 hours of transfection, the supernatant was collected, and the activity of EC-SOD was determined using the water-soluble tetrazolium WST-1 reagent (Dojindo, Japan) according to the manufacturer’s instructions to monitor the ROS scavenging effect.

For cell cycle analysis, subconfluent A375 cells were transiently transfected with the empty vector or EC-SOD plasmid. After 24 hours of transfection, the cells were harvested, fixed, permeabilized, stained with propidium iodine (PI), and then subjected to flow cytometry (Becton Dickinson FACScan, San Jose, CA) to evaluate the fluorescence intensity as previously described (28).

C57BL6 and EC-SOD transgenic mice were used for experiments. Generation of EC-SOD transgenic mice was previously described (29). The animals were housed and maintained in a barrier facility at the Institute for Animal Studies, School of Medicine, Catholic University of Korea. All animal protocols used in this study were approved by the Catholic Research Institute of Medical Science Committee for Institutional Animal Care and Use. All mice were maintained under a 12-h light/dark cycle, and the animal had ad libitum access to food and water. Melanoma cells (5 × 105 cells in 100 μl PBS) were injected intravenously into the tail vein of the mice. Lung specimens were collected at various time points (8, 12, and 14 days) after injection, and the effects of EC-SOD on the growth of melanoma nodules were investigated.