In this study, we studied the enhancement of the energy densities of electrochemical capacitors by improving the working voltage range of the electrolyte. To prevent the decomposition of the electrolyte, stable SEI layers were formed by reductive degradation of additive materials such as fluoro-ethylene carbonate (FEC) and vinyl ethylene carbonate (VEC) before degradation of the base electrolyte. As a result, the solution resistance (Rs) of EC:DMC + SL 20 % + VEC 1 % electrolytes observed 1.47 Ω and the charge transfer resistance (Rct) was 2.64 Ω at the open circuit voltage. Additionally, a cycle retention of 94 % was observed for EC:DMC + SL 20 % + VEC 1 % after 500 cycles at 3.5 V.

Recently, high power batteries and devices have been of interest due to increases in the electronic vehicles industry [1,2]. Of the candidates, electrochemical capacitors, such as electrical double layer capacitors (EDLCs) and super-capacitors, have received substantial attention as large-scale energy storage devices due to their higher power densities and long cycle life compared to lithium ion batteries [3,4]. However, electrochemical capacitors have lower energy densities than lithium ion batteries. Energy density can be calculated using the following equation:

According to Eqn. 1, increasing the voltage is the most effective method of improving the energy density [5]. To increasing the potential window of electrochemical capacitors, commercial devices use organic electrolytes such as TEABF4 in acetonitrile (AN) or propylene carbonate (PC), enabling voltages up to 2.7 - 2.8 V to be reached [6]. However, AN and PC are expensive, noxious and have low conductivities, so alternative materials are required. In addition, research into electrolytes with increased potential windows has been more successful at increasing energy density than work focused on commercial electrochemical capacitors [7]. In this study, we studied the enhanced the energy densities of electrochemical capacitors by using a composite solvent and inserting additive materials through the formation of stable SEI layers. We selected a composite solvent using ethylene carbonate (EC) and dimethyl carbonate (DMC) (volume ratio = 1:1) for the base electrolyte due to its higher dielectric constant and lower viscosity when compared to commercial electrolytes. Sulfolane (SL), which has high oxidative stability and good cycling ability at high voltage, was added to the composite solvent in the required amounts [8]. Additionally, fluoro-ethylene carbonate (FEC) and vinyl ethylene carbonate (VEC) were added to the composite solvent to allow formation of stable SEI layers. In the past few years, there have been many reports on FEC and VEC as electrolyte additives for improving the properties of SEI films because of their lower LUMO levels (−0.12 eV and −0.5 eV, respectively) and higher HOMO levels (−7.79 eV and −7.75 eV, respectively) than EC (LUMO: 0.86 eV and HOMO: −8.19 eV) [9]. This allows them to stable SEI layers by reacting before other materials, so the reductive decomposition of FEC and VEC to form SEI films can occur at higher potentials than is possible for of EC [10]. To study the effect of additive on electrolyte reactions, electrochemical measurements, such as cycle retention and c-rate capability, were carried out at high voltage (>3.5 V).

All electrolyte preparations and cell assemblies were conducted in an Ar-filled glove box (koreakiyon, Korea). When assembling the three-electrode systems, the base electrolyte was EC:DMC (vol. ratio = 1:1) with 1M SP2BF4. Electrochemical impedance spectra (EIS, ZIVE sp2, WonATech) were measured from 100 kHz to 30 mHz with an amplitude of 10 mV at the open circuit voltage. The surface morphologies of electrodes after cycling were observed using high resolution-transmission electron microscopy (HR-TEM, JEM 2000EX, JEOL). 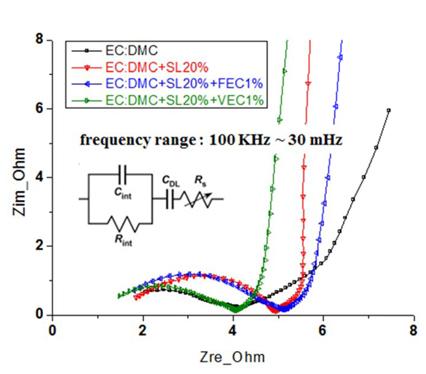 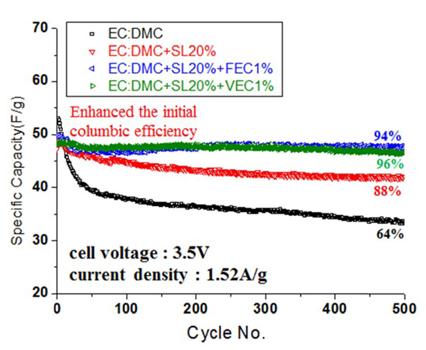 Fig. 3 shows the reductive degradation mechanisms of FEC and VEC at high voltages (> 3.0 V). According to the work of Kim et al., FEC can reductively decompose into vinylene carbonate (VC) and HF [9]. VC is easily reduced and tends to polymerize due to the presence the double bond between the carbon atoms. Such polymerized SEI films prevent further decomposition of the electrolyte. VEC is also capable of reductive decomposition and formation of stable SEI films [13-15]. Reductive degradation is expected to prevent the degradation of EC:DMC due to the lower LUMO levels and higher HOMO levels of the materilas than EC. 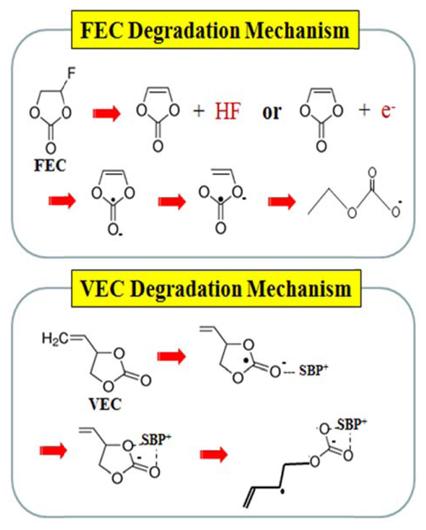 Fig. 4 shows TEM images of the electrode surfaces of EDLCs with 1M SP2BF4-based (a) EC:DMC, (b) EC:DMC + SL 20 % and (c) EC:DMC + SL 20 % + VEC 1 % after 100cycles. In TEM images, it can be seen that an amorphous layer had been generated on the surface of the active carbon electrode after 100 cycles. When additive materials were included along with EC:DMC the base electrolyte, the thickness of the SEI layer increased from 22 nm to 83 nm. It is suggested that the formation of the SEI layer during cycling improved performance at high voltages. The stable SEI layer protected the electrode surface during cycling performance. Additionally, it prevented degradation of the EC:DMC base electrolyte at high voltages, which could allow development of electrochemical capacitors with high energy densities.

We studied the possibility of increasing the working voltage of EDLCs in order to enhance the energy density of electrochemical capacitors. To prevent the decomposition of the electrolyte, stable SEI layers were formed by reductive degradation of additive materials such as FEC and VEC, which prevented degradation of the base electrolyte. As a result, Rs value of the EC:DMC + SL 20 % + VEC 1 % electrolyte was 1.47 Ω and Rct value was 2.64 Ω at the open circuit voltage. Additionally, the cycle retention of the EC:DMC + SL 20 % + VEC 1 % electrolyte was observed 94 % after 500 cycles at 3.5 V at a current density of 1.52 A/g. TEM images show that an amorphous material formed on electrode surface. However, further work will be needed to determine the precise formation mechanism of the SEI layer and its constituents.