Journal of the Korean Society of Surveying, Geodesy, Photogrammetry and Cartography (한국측량학회지)

The analysis of remote sensing data depends on sensor specifications that provide accurate and consistent measurements. However, it is not easy to establish confidence and consistency in data that are analyzed by different sensors using various radiometric scales. For this reason, the cross-calibration method is used to calibrate remote sensing data with reference image data. In this study, we used an airborne hyperspectral image in order to calibrate a multispectral image. We presented an automatic cross-calibration method to calibrate a multispectral image using hyperspectral data and spectral mixture analysis. The spectral characteristics of the multispectral image were adjusted by linear regression analysis. Optimal endmember sets between two images were estimated by spectral mixture analysis for the linear regression analysis, and bands of hyperspectral image were aggregated based on the spectral response function of the two images. The results were evaluated by comparing the Root Mean Square Error (RMSE), the Spectral Angle Mapper (SAM), and average percentage differences. The results of this study showed that the proposed method corrected the spectral information in the multispectral data by using hyperspectral data, and its performance was similar to the manual cross-calibration. The proposed method demonstrated the possibility of automatic cross-calibration based on spectral mixture analysis.

As the number of Earth observation satellites has increased, an increasing amount of remote sensing data has been extended to applications of remote sensing in different fields of study. Remote sensing data acquired from multiple sensors at various acquisition times have been used for continuous data collection within a given time to increase the accuracy of analysis. Because result of remote sensing analysis depends on accurate data and consistent measurement over a given period, remote sensing data gathered from various imaging sensors and under different atmospheric conditions must be on a consistent radiometric scale. Radiometric calibration for the consistent radiometric scale can be conducted through the ground prior to launch, onboard the spacecraft post-launch, and cross-calibration based on reference images of the Earth. Among these methods, cross-calibration is the feasible solution to place both similar and different sensors on a common radiometric scale without the need of field data or sensor information. Hence, cross-calibration could play an important role in interoperability and data fusion (Chander et al., 2013).

Several previous studies performed cross–calibration techniques on multispectral images, such as Landsat TM and ETM. Song (2004) proposed a simple approach to cross-sensor calibration for NDVI indices. In their study, IKONOS and Landsat ETM+ were divided into vegetation and non-vegetation areas by the segmentation and classification of an IKONOS image. The NDVI values in each area were calibrated by histogram matching. Röder et al. (2005) developed the radiometric inter-calibration of Landsat TM and MSS, which was used to perform the normalization of radiometrically uncorrected images using the available knowledge of parameters for the radiometrically corrected image. Teillet et al. (2007) investigated Spectral Band Difference Effects (SBDE), which are significant in cross-calibration between multiple satellite sensors. They also demonstrated cross-calibration requires that the spectral dependencies of the sensor responses and scene illumination, atmosphere, and surface were taken into account. On the other hand, Brook and Dor (2011) used vicarious calibration targets to correct sensor radiance within a short period. Chander et al. (2013) introduced the Spectral Band Adjustment Factor (SBAF), which determines the spectral profile of the target and relative spectral responses between Landsat ETM+ and MODIS images. This study used additional Hyperion data to derive the spectral signature of the target for SBAF computation.

Using hyperspectral data and spectral mixture analysis technique, we present an automatic cross-calibration method to calibrate the multispectral image used in this study. The spectral characteristics of the multispectral image were adjusted using linear regression analysis based on the endmember sets from two images, which were automatically extracted using spectral unmixing techniques. The bands in the hyperspectral image were aggregated based on the spectral response function to reduce the difference in relative spectral responses between the spectral bands of two images.

The method proposed for the cross-calibration of hyperspectral images is divided into three parts. The first section includes the conversion to Top of Atmosphere (TOA) and histogram matching to reference the data and determine the target data. These data need to be calibrated before performing spectral unmixing between the reference data and the target data. The second section is the endmember set estimation. The endmember set estimation between the hyperspectral and multispectral images is performed using NMF based on the spectral unmixing approach. In spectral unmixing, the linear model is generally recognized as acceptable in many real-world scenarios even though it is not always true, such as in collected conditions with strong non-linearity (Keshava, 2003). Both hyperspectral images, which are reference image (REF) and multispectral images, which are target data (TAR), can be unmixed into endmember and abundance as follows:

In Eq. (1), REF is a hyperspectral image, υ represents noise, and emREF and abunREF are endmember spectrum collection and their abundance map of REF, respectively. In Eq. (2), TAR is a multispectral image that needs to be calibrated, emTAR and abunTAR are endmember sets and their abundance map of TAR, respectively. To estimate gain and offset through linear regression analysis, emREF and emTAR require the spectral information about identical materials on the scene. Because it is difficult to estimate emREF and emTAR in the same material directly from Eqs. (1) and (2), we adopted CNMF to calculate the optimized emREF and emTAR between REF and TAR (Yokoya et al., 2012). The origianl CNMF is focused on the image fusion of images collected simultaneously from same sensor system and estimates endmember sets and abundance maps assuming that the images have less atmospheric and radiometric differences (Yokoya et al., 2012). Because the concept of cross-calibration is to calibrate images radiometrically and atmospherically by using a radiometric- and atmospheric-corrected image, we focused to estimate endmember sets between images although the images have high atmospheric and radiometric differences.

Fig. 1 shows the entire process of the endmember set estimation that we proposed. Each NMF unmixing updates the endmember sets or abundance maps of REF and TAR, which was done using multiplicative update rules as follows: 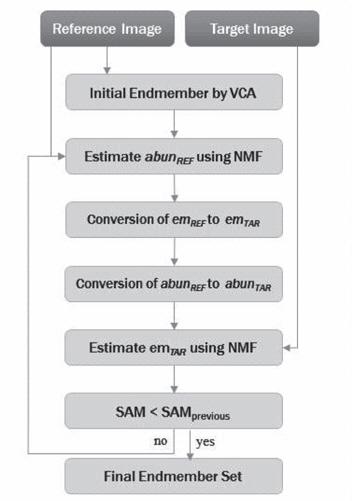 In Eqs. (3) and (4), em is either emREF or emTAR, and abum is either abunREF or abunTAR. IMG represents REF or TAR in each step. abunT and emT denote the transposition of a matrix abun and em, respectively. emi and abuni are the em and abun in ith iteration step and can be updated to emi+1 and abuni+1 using Eqs. (3) and (4) (Berry et al., 2007).

After the optimal endmember set between REF and TAR was estimated, band aggregation was performed based on the spectral response function of REF and TAR. Using emREF after the band aggregation and emTAR from the optimal endmember set, we performed linear regression analysis and calibrated the TAR by applying estimated gain and offset to get calibrated result, TARcalibrated, as follow:

The hyperspectral images collected by the airborne CASI-1500 sensor were used to calibrate RapidEye multispectral images. The CASI-1500 sensor was developed by ITRES Research Ltd. of Canada. This sensor is a pushbroom imaging spectrometer with a spectrum ranging from 380 nm to 1050 nm. The CASI images used in this study were taken in the Sejong-bo area in Sejong-Ri Yeongi-Myun Sejong-Si, Korea on 2 May 2014. Radiometric calibration, geometric correction, and optional environmental calibration were applied to collected stripes of CASI images to obtain orthocorrected images. RapidEye is a German geospatial information provider that operates fi ve observation satellites. It is the fi rst commercial sensor to detect the Red Edge band and provides data with a spatial resolution of 5 m GSD at nadir. The RapidEye scene for this study was collected at Sejong-si, including Sejong-bo, on 1 May 2014. The product level was 1B, which is radiometric- and sensor-corrected and provides imagery as seen from the spacecraft without correction for any geometric distortions inherent in the imaging process. The specifications of the CASI and RapidEye images and the site scene are presented in Table 1, Fig. 2, and Fig. 3. 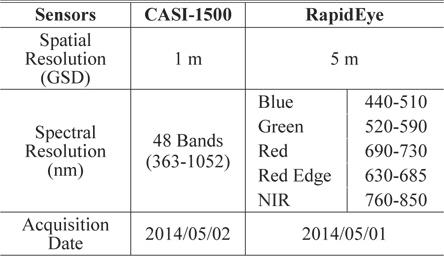 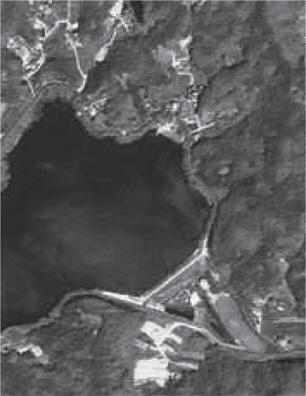 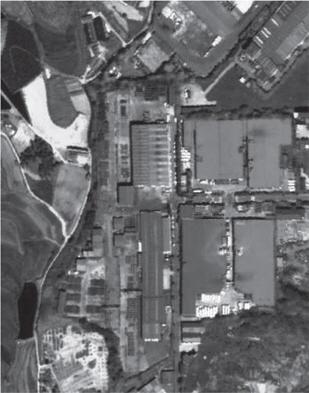 Registration between the CASI and RapidEye images was performed with manually collected GCPs. Study sites 1 and 2 were selected from areas that included water, vegetation, paddy fields, and urban structures.

In this study, the number of endmembers was set at 30. The maximum number of iterations of the entire loop was five because high numbers of the iteration of the entire loop caused abnormal abundance fractions because of the radiometric difference between the CASI and RapidEye images. The maximum number of iterations in individual NMF unmixing was set at 300 for optimal updating and appropriate time expenses. The threshold value to exit the individual NMF unmixing iteration by using Frobenius norm was set at 0.0001 (Yokoya et al., 2012).

The results of the proposed cross-calibration method were compared with the results of empirical line calibration (ELC) utility in an ENVI program, which performed the cross-calibration with manually collected regions of interest (ROIs); 30 ROIs from the scene were collected manually from invariant features of urban structure, water, forest, paddy fields, and more to process the empirical line calibration. Both results were statically evaluated using the root mean square error (RMSE) and SAM to compare the pixel difference and spectral difference in the calibrated results with the reference data. The RMSE and SAM values were calculated using Eqs. (7) and (5), respectively. In Eq. (7), n is the total number of pixel, and reference (i) and result (i) are the reflectance value of ith pixel in reference and result images, respectively. In Eq. (5), result 1 is reference and result 2 is the calibration result image. The average percent difference was also calculated to compare differences before and after cross-calibration. The average percent difference indicates the degree in percentage of the differences between the pixels in two images. It was calculated by Eq. (8), where reference is the matrix with reflectance values of reference and result is the matrix with reflectance values of calibration result (Chander et al., 2013).

Table 2.Comparison of RMSE and SAM indices for cross-calibration results 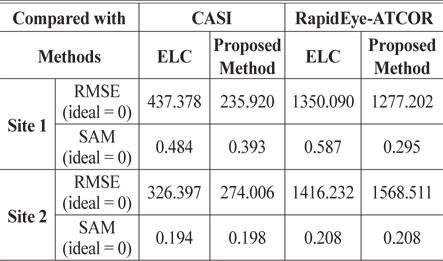 Table 3.Average % difference before and after cross-calibration 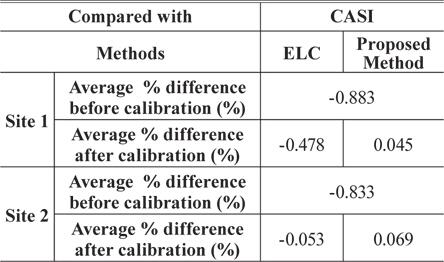 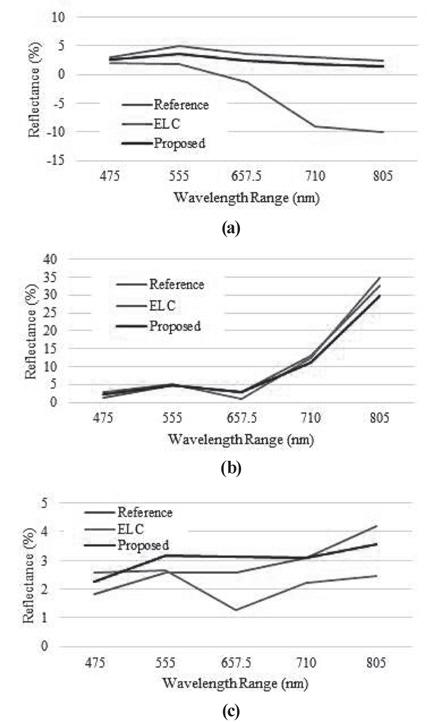