The R3V6 peptide includes a hydrophilic arginine stretch and a hydrophobic valine stretch. In previous studies, the R3V6 peptide was evaluated as a gene carrier and was found to have low cytotoxicity. However, the transfection efficiency of R3V6 was lower than that of poly-L-lysine (PLL) in N2A neuroblastoma cells. In this study, the transfection efficiency of R3V6 was improved in combination with high mobility group box 1A domain (HMGA). HMGA is originated from the nuclear protein and has many positively-charged amino acids. Therefore, HMGA binds to DNA via charge interaction. In addition, HMGA has a nuclear localization signal peptide and may increase the delivery efficiency of DNA into the nucleus. The ternary complex with HMGA, R3V6, and DNA was prepared and evaluated as a gene carrier. First, the HMGA/DNA complex was prepared with a negative surface charge. Then, R3V6 was added to the complex to coat the negative charges of the HMGA/DNA complex, forming the ternary complex of HMGA, R3V6, and DNA. A physical characterization study showed that the ternary complex was more stable than the PLL/DNA complex. The HMGA/R3V6/DNA complex had a higher transfection efficiency than the PLL/DNA, HMGA/DNA, or R3V6/DNA complexes in N2A cells. Furthermore, the HMGA/R3V6/DNA complex was not toxic to cells. Therefore, the HMGA/R3V6/DNA complex may be a useful gene delivery carrier.

R3V6 peptides are composed of an arginine stretch and a valine stretch. R3V6 formed a micelle structure in aqueous solution. An in vitro study showed that the R3V6 peptide had lower cytotoxicity than PLL and PEI.7 However, the gene delivery efficiency of the R3V6 peptide was lower than that of PLL in N2A neuroblastoma cells, suggesting that R3V6 should be improved to be useful for therapeutic gene delivery.

In our previous study, a recombinant high mobility group box 1A domain (HMGA) was expressed in bacteria and purified by affinity chromatography.8 It has been reported that wild-type high mobility group box 1 (HMGB-1) can non-specifically bind minor grooves of DNA and induce a strong DNA bend. HMGB-1 has an A box, B box, and acidic tail. The A box and B box are DNA-binding domains with positive charges. Specifically, the A box has a nuclear localization sequence (NLS). These characteristics suggest that HMGB-1 may be a useful DNA carrier.9,10 However, its acidic tail has a high aspartate and glutamate content with a negative charge, which interferes with DNA and peptide interactions. Therefore, the acidic tail was eliminated from HMGB-1 to improve the transfection efficiency of the HMGB-1/DNA complexes.10,11 In addition, the B box has a pro-inflammatory domain, which has a deleterious effect in gene delivery. Thus, the recombinant HMGA without the B box or the acidic tail was evaluated as a DNA carrier.8,11 However, HMGA had a lower transfection efficiency than PLL and lipofectamine in N2A cells. We hypothesized that the low transfection efficiency of HMGA may be due to its low charge density. If this is the case, the positive charges may be supplied by R3V6, which can increase the stability of the HMGA/DNA complex. Therefore, the combination of R3V6 and HMGA may increase the transfection efficiency of HMGA by increasing the stability of the complex. Furthermore, the NLS in HMGA may be useful to increase the transfection efficiency of R3V6. To confirm the synergistic effect of HMGA and R3V6, we performed various physical characterization and transfection assays.

Synthesis of R3V6 Peptides. The peptides, with three arginines and six valines, were synthesized chemically and were purified using C18 reverse-phase chromatography (Peptron Co., Daejeon, South Korea). The peptides were then dissolved in water at 4 mg/mL and stored at −70 ℃.

Expression of HMGA. First, pET21a-HMGA was transformed into Escherichia coli (E. coli ) BL21 for expression. A single colony of E. coli was selected and cultured overnight in 10 mL Luria-Bertani (LB) medium containing 50 mg/mL ampicillin in a shaking incubator at 37 ℃ and 250 rpm. This bacterial culture was transferred to 4 L LB containing ampicillin and incubated under the same conditions until it reached an optical density of 0.6-0.8 at 600 nm. Then, IPTG was added to a final concentration of 500 mM to induce HMGA expression. The cells were incubated for an additional 6 h and harvested by centrifugation at 6,000 × g for 15 min at 4 ℃. The supernatant was removed, and the bacterial pellet was resuspended in chilled lysis buffer (50 mM NaH2PO4, 300 mM NaCl, 10 mM imidazole, and 6 M urea; pH 8.0) containing 1 mM phenylmethanesulfonyl fluoride (PMSF). The resuspended bacterial cells were treated with lysozyme (0.3 mg/mL) for 20 min and then lysed by sonication (30 3-s bursts) with 5 min on ice between bursts. The lysate was cleared by centrifugation at 10,000 × g for 30 min at 4 ℃, and the supernatant was used for HMGA purification.

Gel Retardation Assay. The formation of a plasmid DNA (pDNA)/HMGA/R3V6 complex was verified through a gel retardation assay. A fixed amount of pDNA (pβ-Luc, 0.5 μg) was mixed with increasing amounts of R3V6 peptides and HMGA in distilled water. The complex mixtures were electrophoresed on a 1% agarose gel in the presence of ethidium bromide (EtBr) for 30 min at 100 V in 1× TBE buffer solution. The pDNA was visualized using a UV transilluminator.

Heparin Competition Assay. A heparin competition assay was performed to evaluate the stability of the pDNA/ HMGA/R3V6 complex. A fixed amount (0.5 μg) of pβ-Luc was mixed with HMGA/R3V6, HMGA, R3V6, or PLL (20 kDa, Sigma, St. Louis, MO, USA) at weight ratios of 1:4:10, 1:4, 1:20, and 1:2, respectively. The weight ratios were the optimal ratios for the highest transfection, as determined by previous studies12 or in this study. The complexes were incubated for 30 min at room temperature. After incubation, heparin was added to the peptide/DNA complexes at DNA to heparin weight ratios of 1 to 1, 3, 5, 7, 9, 12, 15, and 20. The complexes were analyzed by electrophoresis on a 1% agarose gel in the presence of EtBr for 30 min at 100 V in 1× TBE buffer. DNA was visualized using a UV transilluminator.

Measurement of Zeta Potential and Complex Size. The pβ-Luc/HMGA/R3V6 complexes were prepared at 1:4:10 weight ratios, and polyethylenimine (25 kDa, PEI25k) was added to the complex solution at a 40:1 N (nitrogen of PEI25k)/P (phosphate of DNA) ratio. The complexes were incubated for 30 min at room temperature for complex formation. After incubation, the particle sizes and zeta potentials were determined by the Zetasizer Nano ZS system (Malvern Instruments, UK) as described previously.8

Cell Culture and Transfection. Mouse neuroblastoma Neuro-2A (N2A) cells were seeded onto 12-well plates 24 h prior to transfection at a density of 1 × 105 cells/well in Dulbecco's Modified Eagle Medium (DMEM) with 10% fetal bovine serum (FBS) and antibiotics (penicillin and streptomycin) at 37 ℃ in a humidified 5% CO2 atmosphere. To determine the optimal complex formation ratio for the highest transfection efficiency, the pβ-Luc/HMGA/R3V6 complexes were prepared with various amounts of HMGA and R3V6. The pβ-Luc/HMGA, pβ-Luc/R3V6, pβ-Luc/ PLL, and pβ-Luc/lipofectamine complexes were prepared in 5% glucose solution at 1:4, 1:20, 1:2, and 1:2.5 weight ratios, respectively. The amount of DNA was fixed at 2 μg/ well. The weight ratios were the optimal ratios for the highest rates of transfection, as determined in previous studies12 or in this study. The cell culture medium was replaced with 1 mL serum-free DMEM before transfection. The DNA/carrier complexes were added to the cells and incubated for 4 h at 37 ℃. After the incubation, the transfection mixtures were removed, and 1 ml fresh DMEM with 10% FBS was added to the cells. The cells were incubated for an additional 20 h at 37 ℃ in a humidified 5% CO2 atmosphere.

Luciferase Assay. After transfection, the cells were washed twice with PBS, and 150 μL of reporter lysis buffer (Promega, Madison, WI, USA) was added to the cells. After 5 min of incubation at room temperature, the cell lysates were harvested and transferred to microcentrifuge tubes. After centrifugation at 13,000 rpm for 10 min, the cell extracts were transferred to new tubes. Luciferase activity was measured in a 96-well plate luminometer (Berthold Detection System, GmbH, Pforzheim, Germany). The total protein concentration of each sample was measured using a BCA assay kit (Pierce). Luciferase activity was expressed as relative light units (RLU)/mg protein.

Cytotoxicity Assay. N2A cells were seeded onto 24-well plates at a density of 5 × 104 cells/well and incubated for 24 h before transfection. Transfection with pβ-Luc (0.5 μg/ well) was performed at a pDNA/HMGA/R3V6 weight ratio of 1:4:10. The pβ-Luc/R3V6 (weight ratio, 1:20), pβ-Luc/ PLL (weight ratio, 1:1), and pβ-Luc/lipofectamine (weight ratio, 1:2.5) complexes were prepared in 5% glucose solution. The cell culture medium was replaced with serum-free DMEM just before transfection. The complexes were added to the cells and incubated for 4 h at 37 ℃. The DMEM containing DNA/carrier complexes was removed, and fresh DMEM with 10% FBS was added to the cells. The cells were incubated for an additional 20 h at 37 ℃ in a humidified 5% CO2 atmosphere. Forty microliters of 5 mg/mL 3-(4,5-dimethylthiazol-2-yl)-2,5-dephenyl-2H-tetrazolium bromide (MTT) reagent were added to each well and incubated for 4 h at 37 ℃. Then, the MTT-containing medium was removed, and cells were dissolved with 700 μL of dimethylsulfoxide. The samples were incubated for 10 min at 50 ℃, and the absorbance of the samples was measured at 570 nm.

A gel retardation assay was performed to confirm the formation of the HMGA/R3V6 complex with pDNA. First, various amounts of HMGA were mixed with 0.5 μg of pβ- Luc. The pDNA was significantly retarded at a 1:5 weight ratio (DNA:HMGA), but additional HMGA did not completely retard DNA even at a 1:20 weight ratio (Fig. 2). This phenomenon was also observed in a previous study that was performed with siRNA.13 Then, the pDNA/HMGA weight ratio was fixed at 1:4, and increasing amounts of R3V6 were added to the pDNA/HMGA complex. The results showed that the pDNA was completely retarded at a 1:4:10 weight ratio (pDNA:HMGA:R3V6), suggesting that the pDNA/ HMGA/R3V6 complex was formed at this ratio. 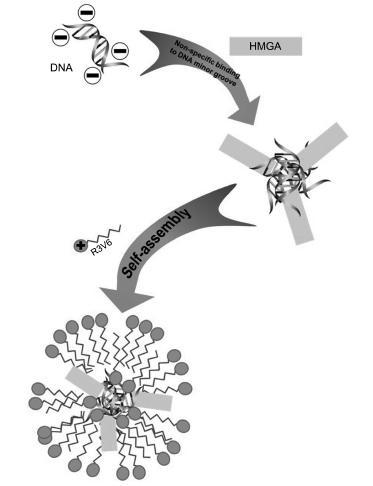 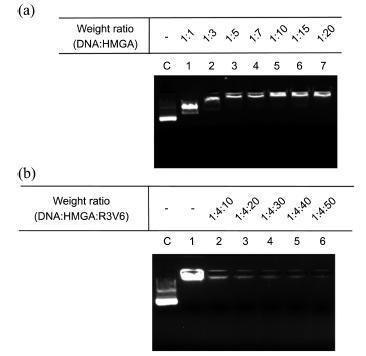 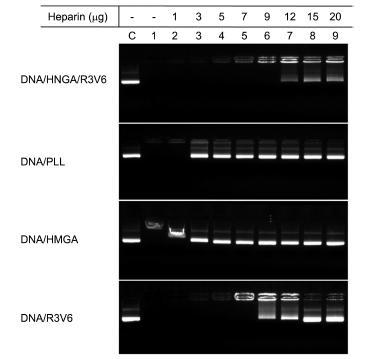 The pDNA/HMGA/R3V6 complex should be prepared by the two-step method described in Figure 1. The mixing sequence should be pDNA → HMGA → R3V6. If R3V6 is added to pDNA prior to the addition of HMGA, the HMGA cannot bind to the pDNA/R3V6 complex. Due to the high positive charge density of R3V6, the negative surface charge of pDNA may be completely shielded by R3V6. To confirm this, we prepared the complex in two ways. The pDNA, HMGA, and R3V6 were mixed in the following sequences: DNA → HMGA → R3V6 or DNA → R3V6 → HMGA. Each complex was transfected into N2A cells. The results showed that the complex of DNA → HMGA → R3V6 had a higher transfection efficiency than the complex of DNA → R3V6 → HMGA (Fig. 4(d)). 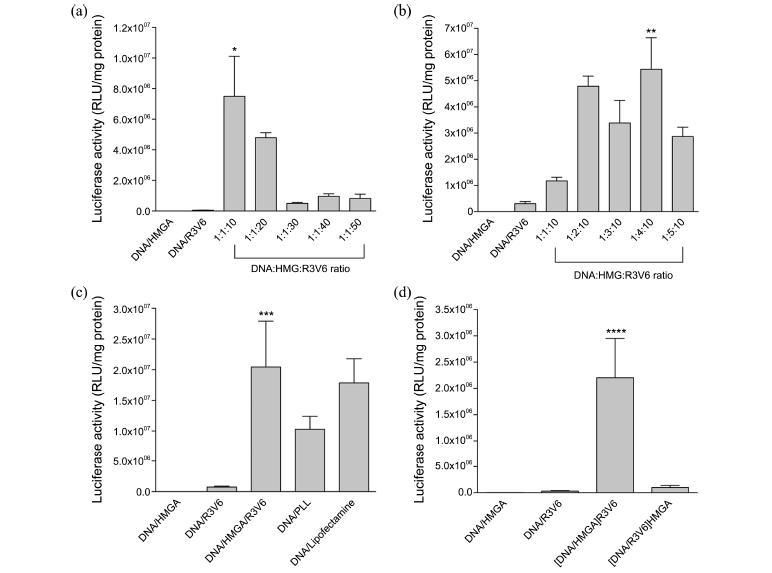 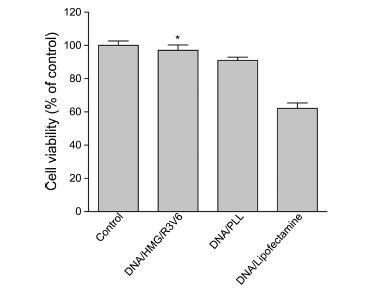 Figure 5.Cytotoxicity of the DNA/HMGA/R3V6 complex. The pDNA/HMGA/R3V6, pDNA/PLL, and pDNA/lipofectamine complexes were transfected into N2A cells. After transfection, cell viability was measured by MTT assay. *P < 0.01 as compared with DNA/PLL and DNA/Lipofectamine.

Supported by : Ministry of Health and Welfare in Korea