Here, we report three new arctiine moths for the first time in Korea, Siccia shikatai Kishida, Nudaria ranruna Matsumura, and Pelosia angusta (Staudinger). Siccia shikatai is distinguished by grayish forewings with a thick and blackish antemedial line, a thin, dark brown and dentate postmedial line and a black <-shaped discal spot and grayish hindwing with a dark brown discal dot. Nudaria ranruna is distinguished by the whitish fore- and hindwings and a large, blackish discal dot and thick medial lines on the forewing. Pelosia angusta is distinguished by dark grayish fore- and hindwings and a thick, dark brown, curved medial line on the forewing.

Bae et al. (2013) and Bayarsaikhan et al. (2016) revised the lithosiine genera in Korea and reported the species Siccia obscura (Leech) for the first time in Korea. They summarized the morphological characteristics of Lithosiini as follows: adults have small to medium sized wingspan with slender body and narrow wings, the sickle-shaped uncus and well-developed saccular process of male genitalia and the sclerotized corpus bursae of female genitalia (Bayarsaikhan et al., 2016). They also noted that a total of 38 species in 16 genera of the subfamily Lithosiinae are distributed in Korea (Bae et al., 2013; Bayarsaikhan et al., 2016).

Here, we report three species of the Lithosiinae for the first time in Korea: Siccia shikatai, Nudaria ranruna and Pelosia angusta. Among them, the genus Nudaria is newly described in Korea. Examination of adults, including the male and female genitalia, is in reference to Bae et al. (2013). The abbreviations are as follows: TL, type locality; MNU, Mokpo National University, Jeonnam; Provinces: JB, Jeollabuk- do; JN, Jeollanam-do; JJ, Jeju-do. 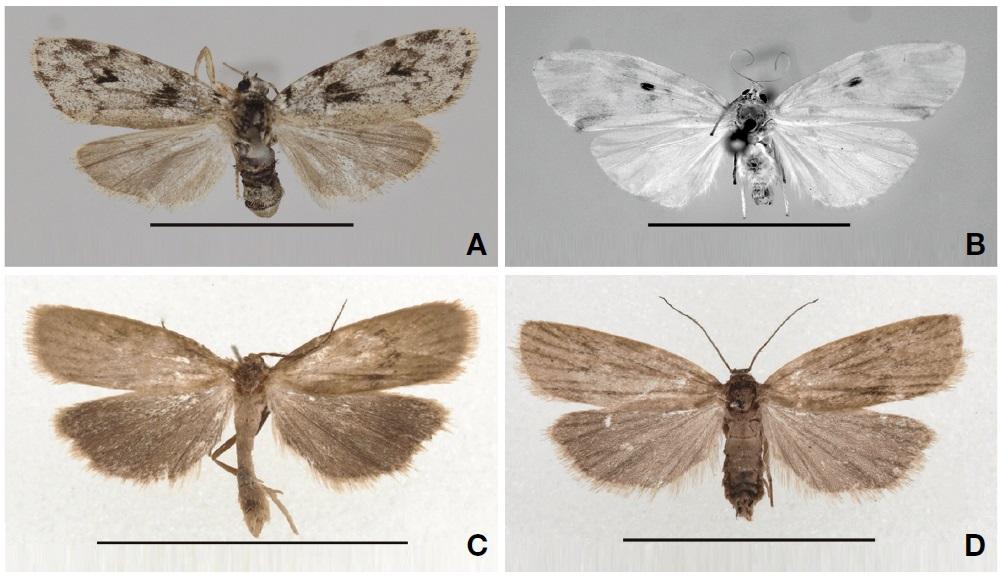 Diagnosis. This species can be characterized by the whitish ground color of the forewing with a large black discal dot. The male genitalia can be identified by a long, bent uncus; the long, slender tegumen; the juxta with a medial pit; the long, slender valva with three distal processes; and the long, slender aedeagus that lacks a cornutus.

Remarks. The genus Nudaria is newly recorded from Korea. Therefore, 17 genera of the Lithosiinae are distributed in Korea.

Diagnosis. This species can be characterized by the dark grayish fore- and hindwings and a thick, dark brown, curved medial line on the forewing. The species is externally very similar to Pelosia noctis, but can be distinguished by the paler grayish ground color of forewings. The male genitalia can be identified by a long, slender uncus, the large, triangular tegumen, the large, rounded saccus, the long and distally divided valva with medially curved costa and a medially small and a distally pointed sacculus processes, as well as the rod-shaped aedeagus with short parallel plates of cornuti patches. The male genitalia are similar to those of P. noctis, but can be distinguished by the absence of the long hornshaped juxta process and the less pointed sacculus process. The female genitalia are distinguished by the broad antrum, the thick and sclerotized ductus bursae and the large corpus bursae with a small rounded patch of signa spicules.