Acrobeloides nanus (de Man, 1880) Anderson, 1968 belonging to the family Cephalobidae Filpijev, 1934 (Cephalobomorpha) is newly reported from South Korea. This species is distinguished from other Acrobeloides species by its low and blunt labial probolae, five lateral incisures with middle incisure extending to the tail tip, and bluntly rounded tail. In this study, details of morphological characters of A. nanus is described and illustrated based on optical and scanning electron microscopy. In addition, molecular sequence data of the D2-D3 region of 28S rDNA, 18S rDNA and mitochondria DNA cox1 region from this species are provided as DNA barcode sequences.

Following a survey of several plots of farmland, A. nanus (de Man, 1880) Anderson, 1968, were isolated from soil samples from potato farms. In this paper, we provide details of a morphological characters and morphometrics for this species from optical microscope and scanning electron microscope (SEM) images. In addition, molecular sequence information of the D2-D3 region of the 28S rDNA, 18S rDNA, and mitochondrial DNA cox1 region from this species are provided as DNA barcode sequence data.

For SEM imaging, nematode specimens were fixed using TAF and maintained for a minimum of 24 h at room temperature. They were then transferred to a 4% aqueous osmium tetroxide solution and kept at 4℃ for 3 days for postfixation. Fixed nematode specimens were dehydrated through a 10%-100% pure ethanol series for 1 h. The samples were dried using a Hitachi HCP-2 critical point drier (Tokyo, Japan). Dried nematodes were mounted on copper/nickel tape and sputter coated with gold/palladium using an Eiko IB-3 ion coater (Tokyo, Japan). Morphological characters of the nematode specimens were observed with a Zeiss Ultra Plus SEM (Oberkochen, Germany) at 15 kV under high-vacuum conditions.

The obtained sequences of the D2-D3 region of 28S rDNA, 18S rDNA, and mtDNA cox1 region from the specimens were aligned with sequences of other acrobeloids available from GenBank, using Clustar X with default options (Thompson et al., 1997). Both ends of the aligned datasets were trimmed before sequence analyses. 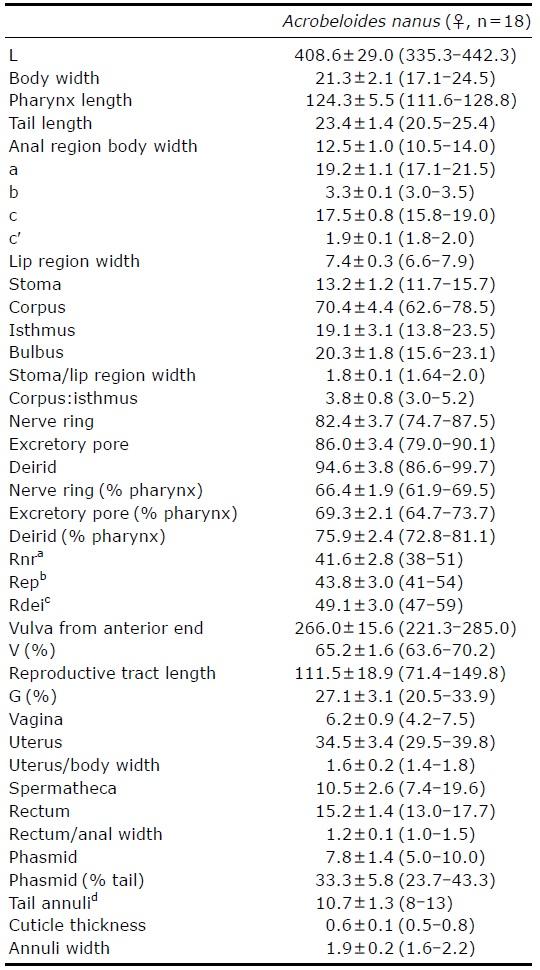 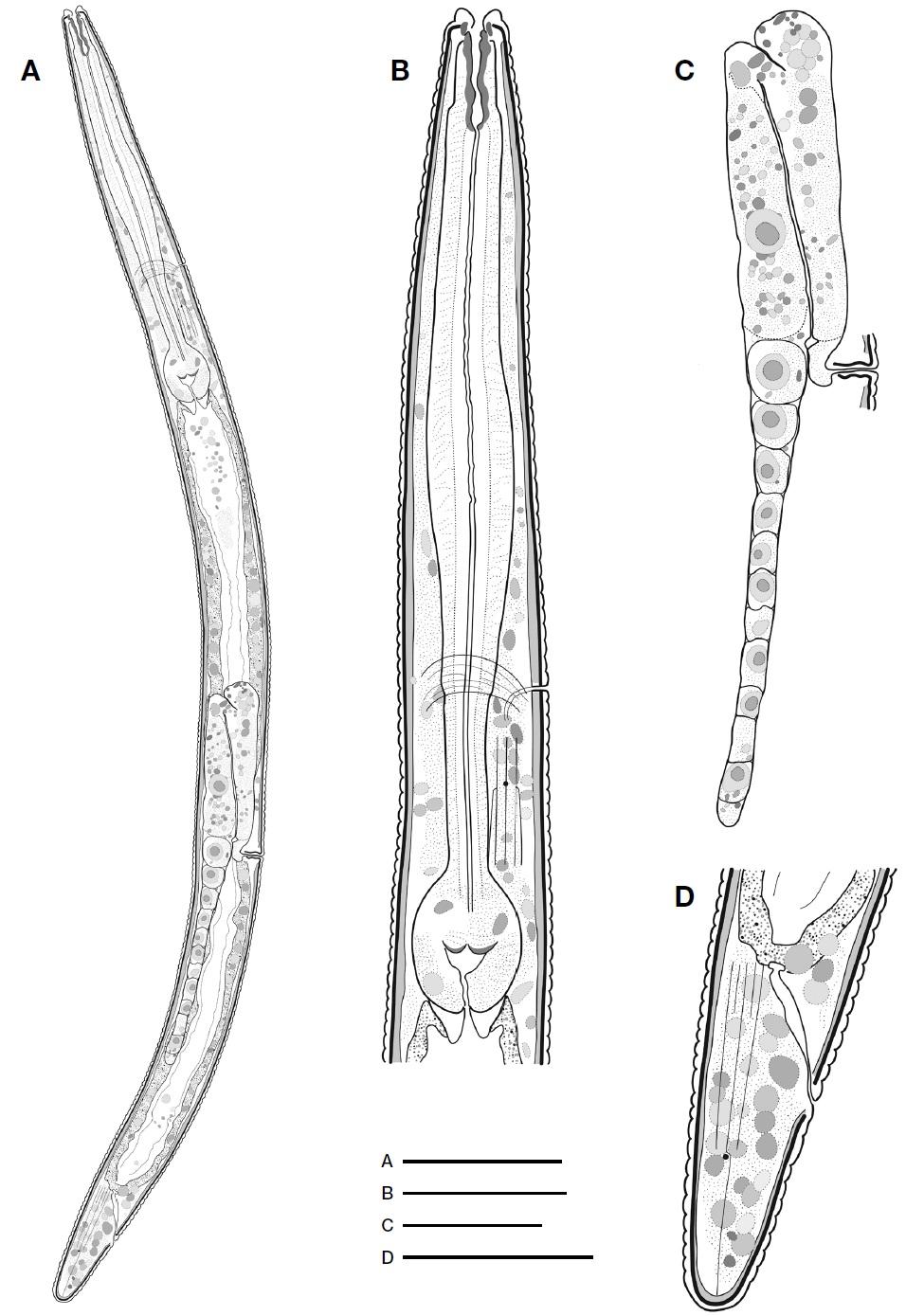 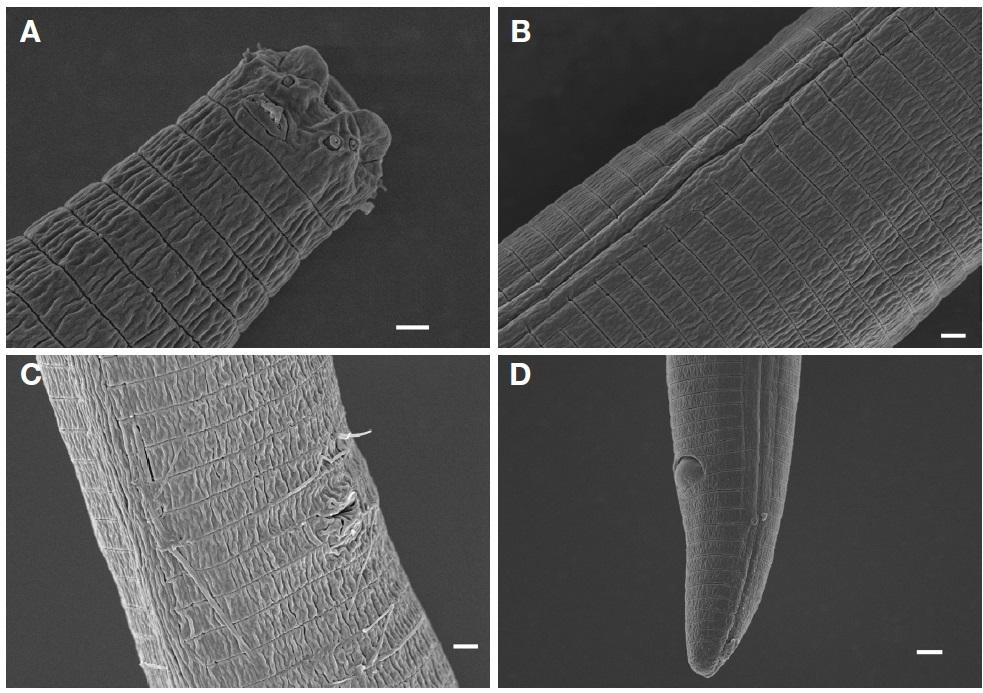 Remarks. Anderson (1968) proposed that in A. nanus, there are intraspecific variations in some morphologies depending on environmental conditions, such as measurements, shape of labial probolae (low-rounded, knobbed, conoid, and apiculate) and tail (hemispherical, clavate, conoid-truncated, and conoid-rounded) and position of phasmid, nerve ring, excretory pore and deirid. The aforementioned morphological variability among A. nanus populations has also been reported from many geographic areas: Australia (Bird et al., 1993), Brazil (Rashid et al., 1984), Canada (Anderson, 1968), Falkland Islands (Boström, 1996), South Georgia Island (Boström, 1996), Krakatau (Rashid et al., 1988), Malaysia (Boström, 1993), and Sweden (Boström and Gydemo, 1983). The morphological characters of the specimens observed from the present study are within the range of intraspecific variation reported from other localities in earlier studies (Table 2). 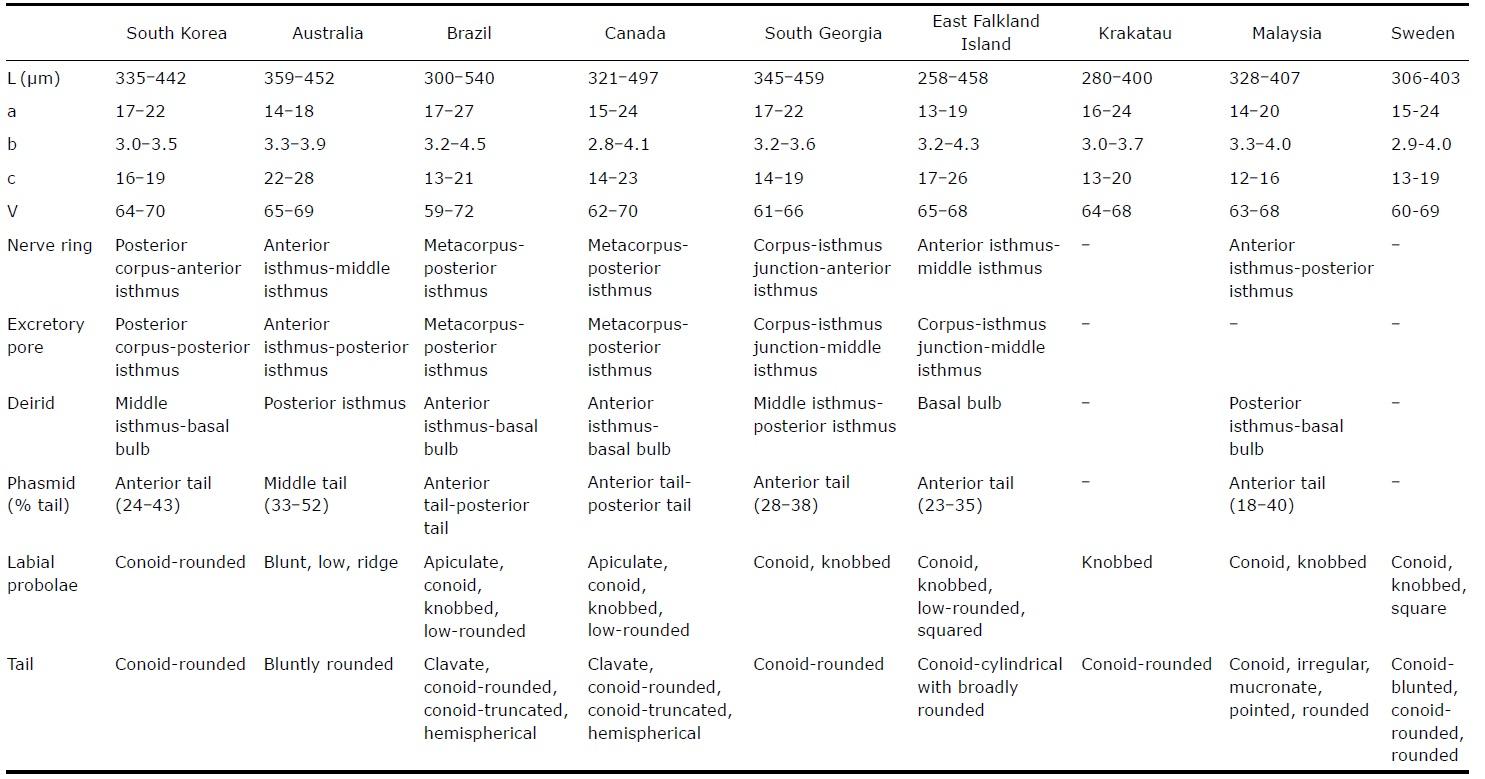 Molecular information. The sequences of the D2-D3 region of 28S rDNA, 18S rDNA, and the partial cox1 gene of mitochondrial DNA were obtained from A. nanus (GenBank accession Nos. KX669640 [D2-D3 region of 28S rDNA], KX669638 [18S rDNA], and KX669639 [partial cox1 gene of mtDNA]) and compared with other acrobeloids available on GenBank. The cox1 sequences from other Acrobeloides species are not yet available on GenBank. We provide cox1 sequence data from A. nanus in this study for use in molecular barcoding.