The genus Aphelenchoides (Fischer, 1894) includes a diverse group of species, some of which are of economic importance. A. bicaudatus (Imamura, 1931) Filipjev and Schuurmans Stekhoven, 1941 is reported for the first time from South Korea, with a detailed redescription of the species. Specimens were collected from chrysanthemum (Chrysanthemum morifolium) leaves and shoot tips in South Korea. The species was identified by morphological traits and molecular sequencing. A bifurcated tail distinguishes A. bicaudatus from its congeneric species. To confirm species identification, we determined the partial 18S ribosomal DNA sequence of the specimens and compared with those obtained from other Aphelenchoides species available on GenBank.

Aphelenchoides Fischer, 1894 is large and abundant genus with a worldwide distribution. They are found in a wide range of habitats; free-living forms in soil (including many mycetophagous species that feed on mushroom mycelium), plant parasitic forms, and some others associated with insects (Nickle, 1970). To date, eight Aphelenchoides species have been recorded from South Korea: A. besseyi (Christie, 1942), A. fragariae (Ritzema Bos, 1891) Christie, 1923, A. parasaprophilus (Sanwal, 1965), A. parietinus (Bastian, 1865) Steiner, 1932, A. ritzemabosi (Schwartz, 1911) Steiner and Buhrer, 1932, A. subtenius (Cobb, 1926) Steiner and Buhrer, 1932, A. paradalianensis (RuQiang, 2011), and A. rotundicaudatus (Fang, 2014).

A. bicaudatus (Imamura, 1931) Filipjev and Schuurmans Stekhoven, 1941 has previously been considered a primarily mycophagous species and is known to feed on mushroom mycelium (Siddiqui and Taylor, 1967); however, it has also been found living on buds and leaves of crops and plants (Jen et al., 2012; this study). Here we provide a detailed redescription of A. bicaudatus, collected from chrysanthemum (Chrysanthemum morifolium) leaves and shoot tips in South Korea, together with a molecular information of 18S ribosomal DNA sequence. 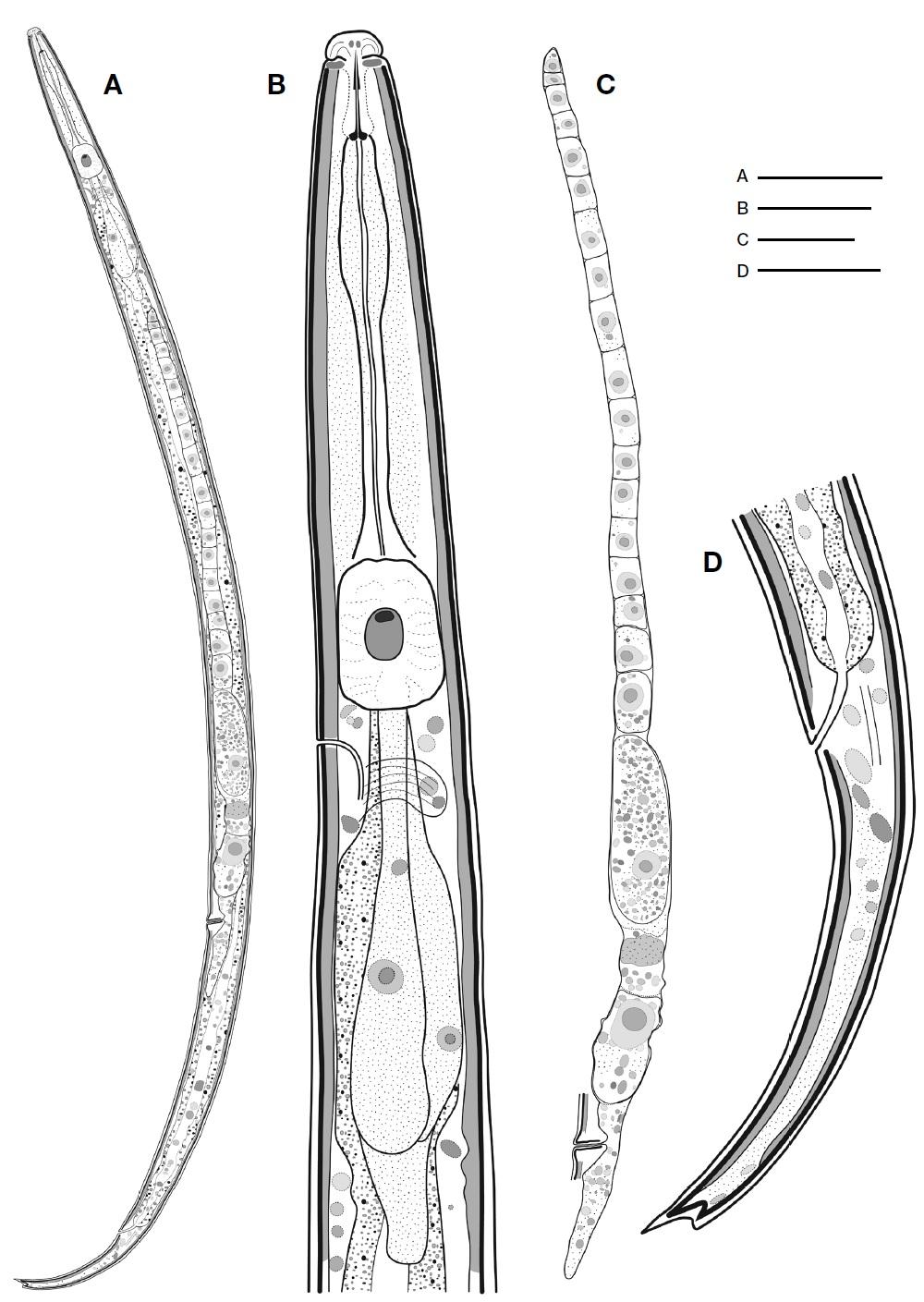 The genus Aphelenchoides includes diverse species that are found abundantly in a wide range of habitats, but eight species have been recorded in South Korea thus far. A. bicaudatus is here reported for the first time in Korea. A. bicaudatus is distinguished from other members of the genus by having an unevenly bifurcated tail tip with prongs of different lengths (Sanwal, 1961). A. hainanensis (Rahm, 1938) T. Goodey, 1951 also has a bifurcated tail tip, but is 1.4-3.4 times longer than A. bicaudatus and has a relatively shorter tail and esophagus. In A. bicaudatus, only females have a bifurcated tail tip, whereas in A. hainanensis both males and females have a bifurcated tail. Males of A. bicaudatus were not found in the present study and appear to be extremely rare, consistent with observations by Siddiqui and Taylor (1967). The morphological characters of A. bicaudatus reported here are the same as previously described, and the morphometric parameters are also generally within the ranges given in other work (Siddiqui and Taylor, 1967) (Table 1). However, body length in the original species description (Imamura, 1931) varies from subsequent studies (Siddiqui and Taylor, 1967; this study). In addition to detailed redescription of its morphology, we reconstructed phylogenetic tree using ML method for the partial 18S rDNA sequences of some selected Aphelenchoides species available on GenBank. The resulting tree depicted two distinct species groups with 100% bootstrap supporting values (Fig. 2): One containing A. fujianensis, A. ritzemabosi, and A. besseyi, and the other containing A. fragariae, A. blastophthorus, A. bicaudatus, and A. subtenuis. Within the latter species group, A. bicaudatus sequences (including Korean isolates; KX345119) were clustered together and in turn sister to A. fragariae+A. blastophthorus with 100% bootstrap value. Intraspecific variation of 18S rDNA among three individuals of A. bicaudatus is lower (≤0.6%) than interspecific variation among Aphelenchoides species (≥20.8%). This result indicates that 18S rDNA sequence provides reliable molecular evidence for species identification in the genus Aphelenchoides.

Table 1.All measurements are in the form mean±SD (range). 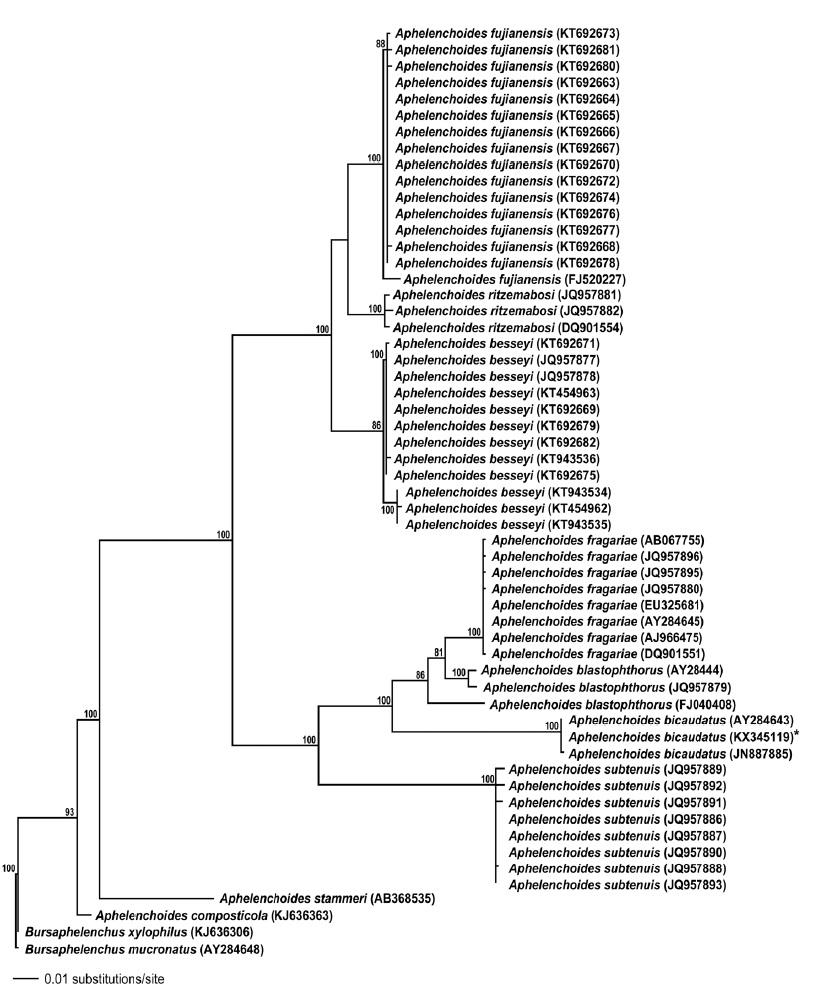 Fig. 2.Maximum likelihood phylogenetic tree of the partial 18S ribosomal DNA sequences of ten Aphelenchoides species, including Aphelenchoides bicaudatus (* determined in this study) and two outgroups (Bursaphelenchus mucronatus and Bursaphelenchus xylophilus). Bootstrap values ≥70% are shown above the branches. GenBank accession numbers are in parentheses after the name of the species.