A New Record of Microarthridion littorale (Copepoda, Harpacticoida, Tachidiidae) from Korea with Taxonomic Note on the Species

A harpacticoid copepod, Microarthridion littorale (Poppe, 1881), is newly recorded in Korea. Microarthridion species can be distinguished from each other by a combination of the number of the antennular segment, the number of the seta on the antennary exopod, and the armature of the thoracopod legs. Korean materials examined coincide well with M. littorale on these well-known characteristics. However, there are some minor differences in the ornamentations of the maxilliped and swimming legs. The specimens show additional sexual dimorphisms in the setae on enp-3 of P1 and exp-3 of P2-P4. Morphological diversity of so-called M. littorale is also discussed here with detailed features.

The family Tachidiidae Boeck, 1896 is a small group comprising 16 species of six genera (Tran and Chang, 2012). They are mainly characterized by nuchal organs, reduced setation of the maxilliped, and a single plate-like P5 in both sexes (Seifried, 2003). They inhabit mainly benthic from euryhaline environment (Chang, 2008). From Korean brackish waters, the following five species belonging to this family have been described: Tachidius discipes Giesbrecht, 1881, Geeopsis incisipes (Klie, 1913), Microarthridion litospinatus Shen and Tai, 1973, Neotachidius parvus Huys et al., 2005, and N. coreanus Huys et al., 2005 (Huys et al., 2005; Chang, 2008). Song and Chang (1995) have reported Tachidius (Neotachidius) triangulris Shen and Tai, 1963. It is synonymized as N. parvus by Chang (2008) with a key to species of the family from Korean waters.

During a study on harpacticoid fauna of Korea, the authors encountered specimens of M. littorale, the type species of the genus, from intertidal mudflat in the southwest coast of Korea. In the present study, we report this species as a new member to Korean fauna with detailed description and illustrations. We also discussed the morphological diversity of so-called M. littorale with detailed characteristics.

Samples were collected from mudflat of intertidal zone by using a 63 μm mesh size sieve. Specimens were fixed initially with 99.9% ethyl alcohol. Before dissection, habitus was drawn and observed from whole specimens mounted in lactophenol. Their appendages were dissected using tungsten needles under a stereomicroscope (Discovery. V8; Carl Zeiss, Göttingen, Germany). Each appendage and urosome were mounted in lactophenol on slides and sealed with Canada balsam. All line drawings were made using a drawing tube attached to a light microscope (Olympus BX53; Olympus, Tokyo, Japan) equipped with differential interference contrast. Materials examined in this study were deposited at the National Institute of Biological Resources (NIBR), Incheon, Republic of Korea.

The terminology for description follows that of Huys and Boxshall (1991). Abbreviations used in the text are as follows: P1-P6, first to sixth thoracopods; exp(enp)-1 (-2,-3), the proximal (middle, distal) segment of ramus. 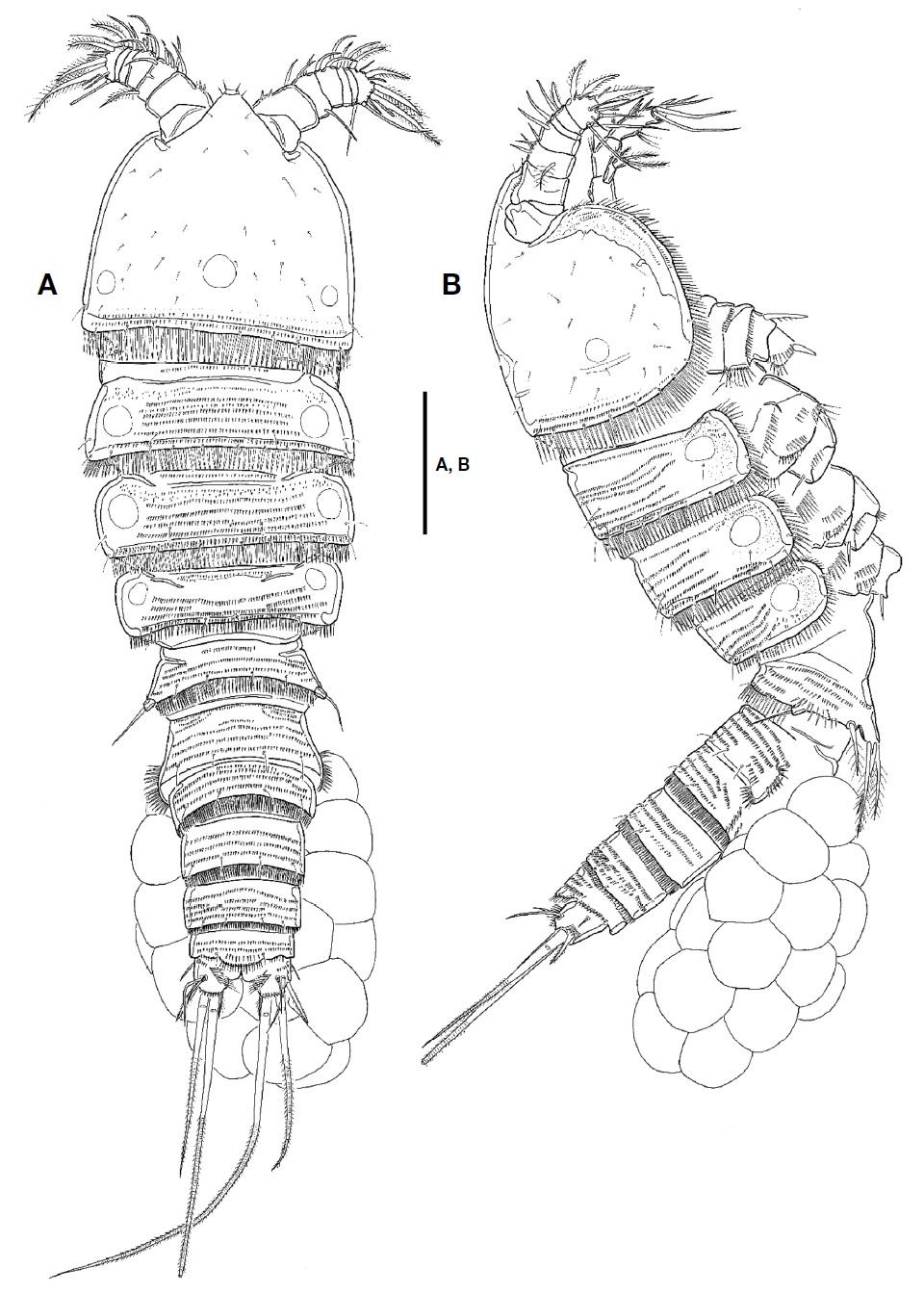 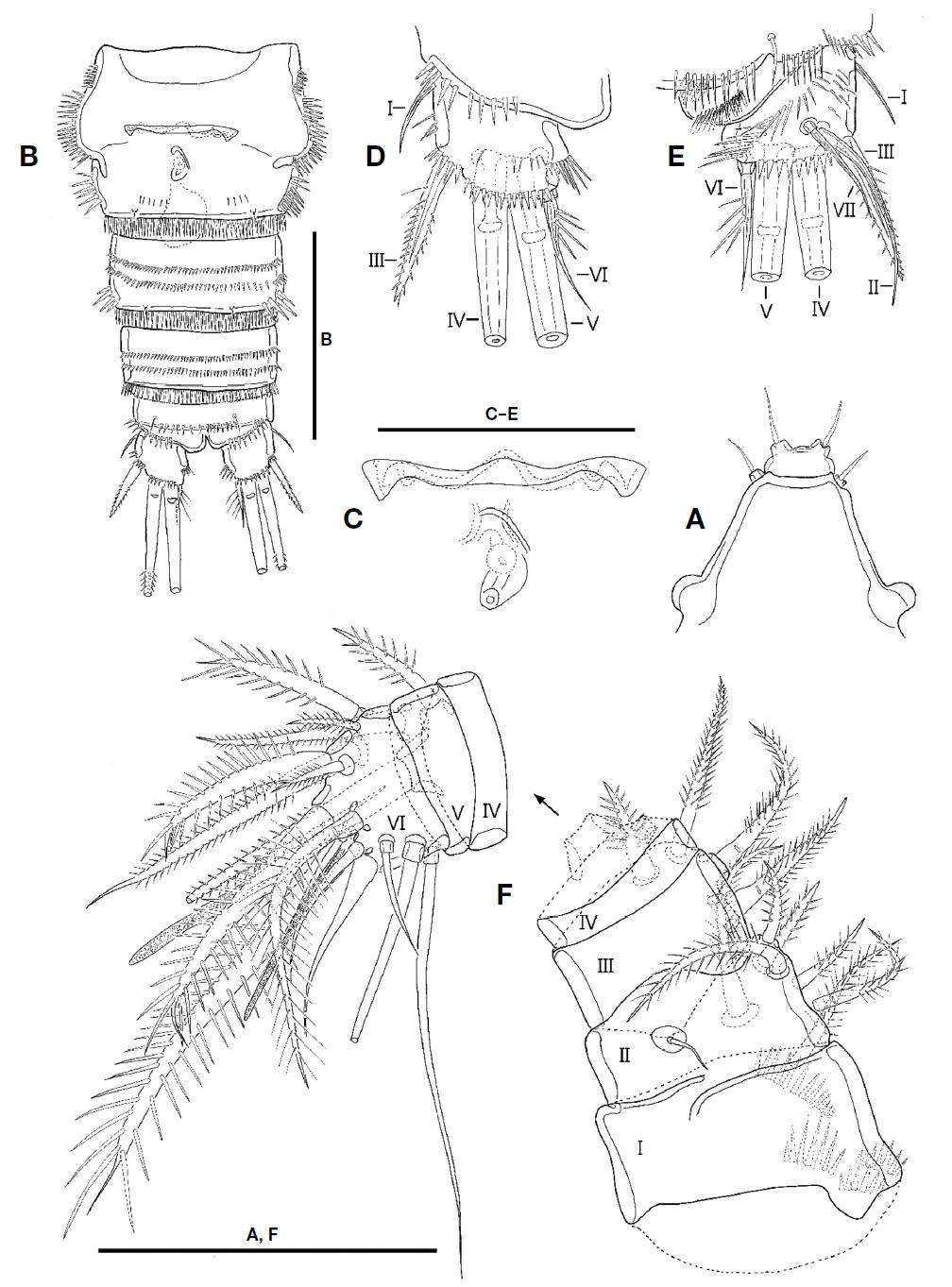 Antenna (Fig. 3A). Coxa without ornamentation. Basis small, shorter than coxa, with 4 rows of spinules. Exopod 2-segmented; proximal segment with 1 plumose seta at distal corner; distal segment slightly shorter than preceding one, with 1 lateral and 2 apical plumose setae. Endopod 2-segmented; proximal segment about 2 times as long as coxa, with 1 row of setules along abexopodal margin; distal segment longer and slender than preceding one, with 1 row of setules on inner margin, 1 row of spinules proximally and 3 pinnate spines on abexopodal margin, and 2 hyaline frills on distal margin; distal armature of distal segment composed of 1 small pinnate spine, 4 geniculate setae, and 1 small bare seta. 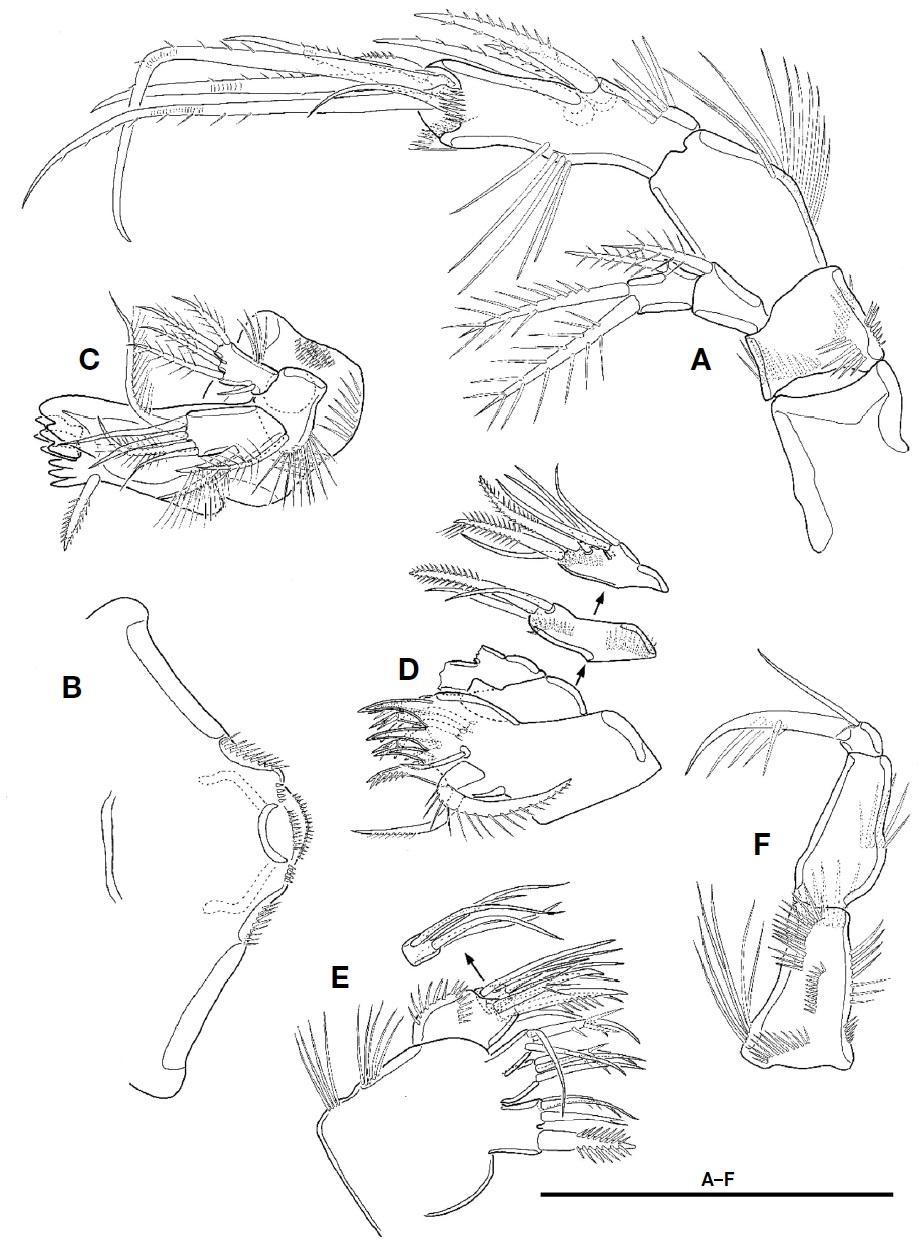 Maxilla (Fig. 3E). Syncoxa with 2 rows of setules along outer margin and 3 endites; proximal endite bilobate, with 1 stout pinnate seta on proximal lobate and 3 setae on distal lobate; both middle and distal endites each with 1 spinulose and 2 bare setae. Allobasis with 2 rows of spinules and bearing 2 spinulose and 2 bare setae. Endopod 1-segmented, small, with 5 elements. 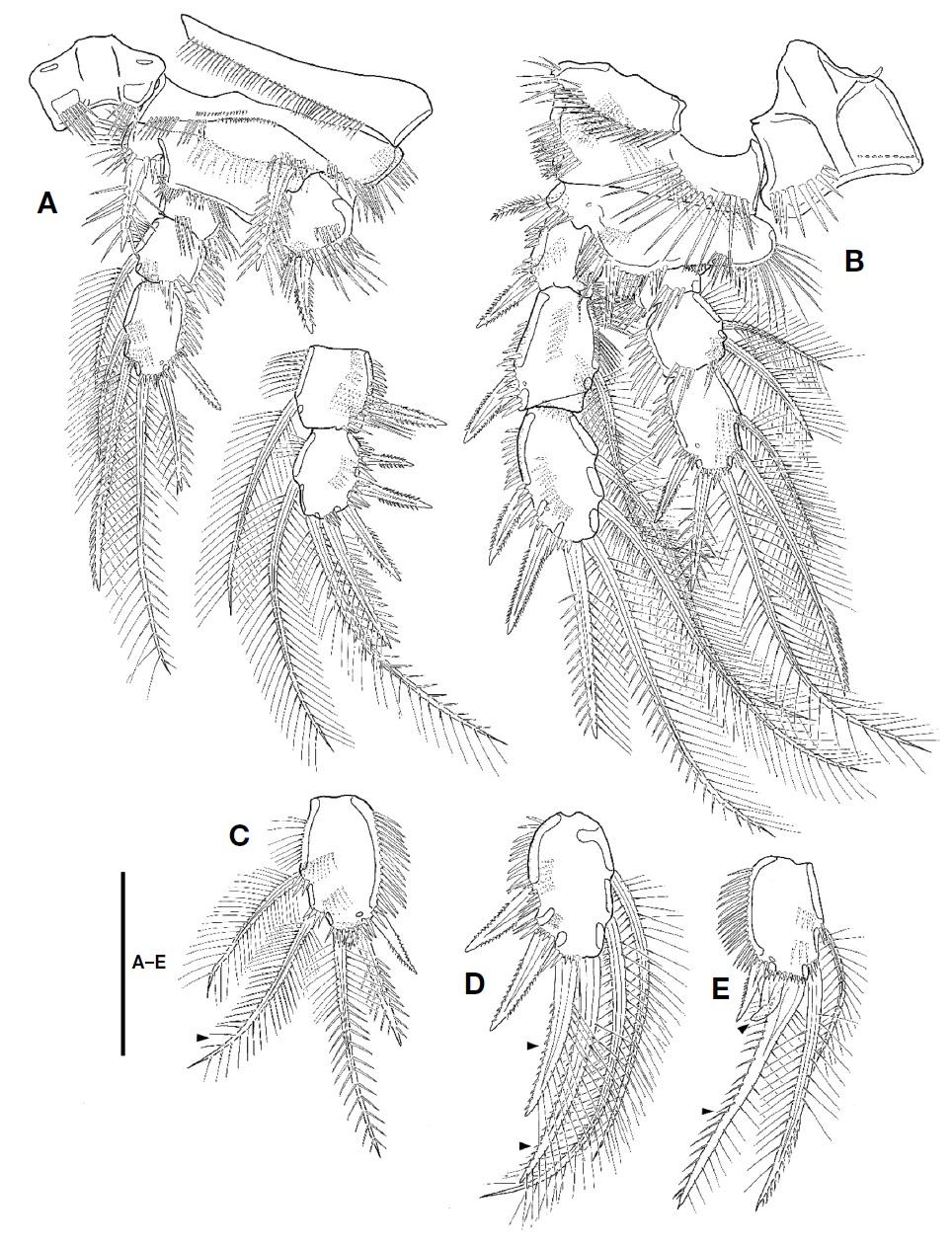 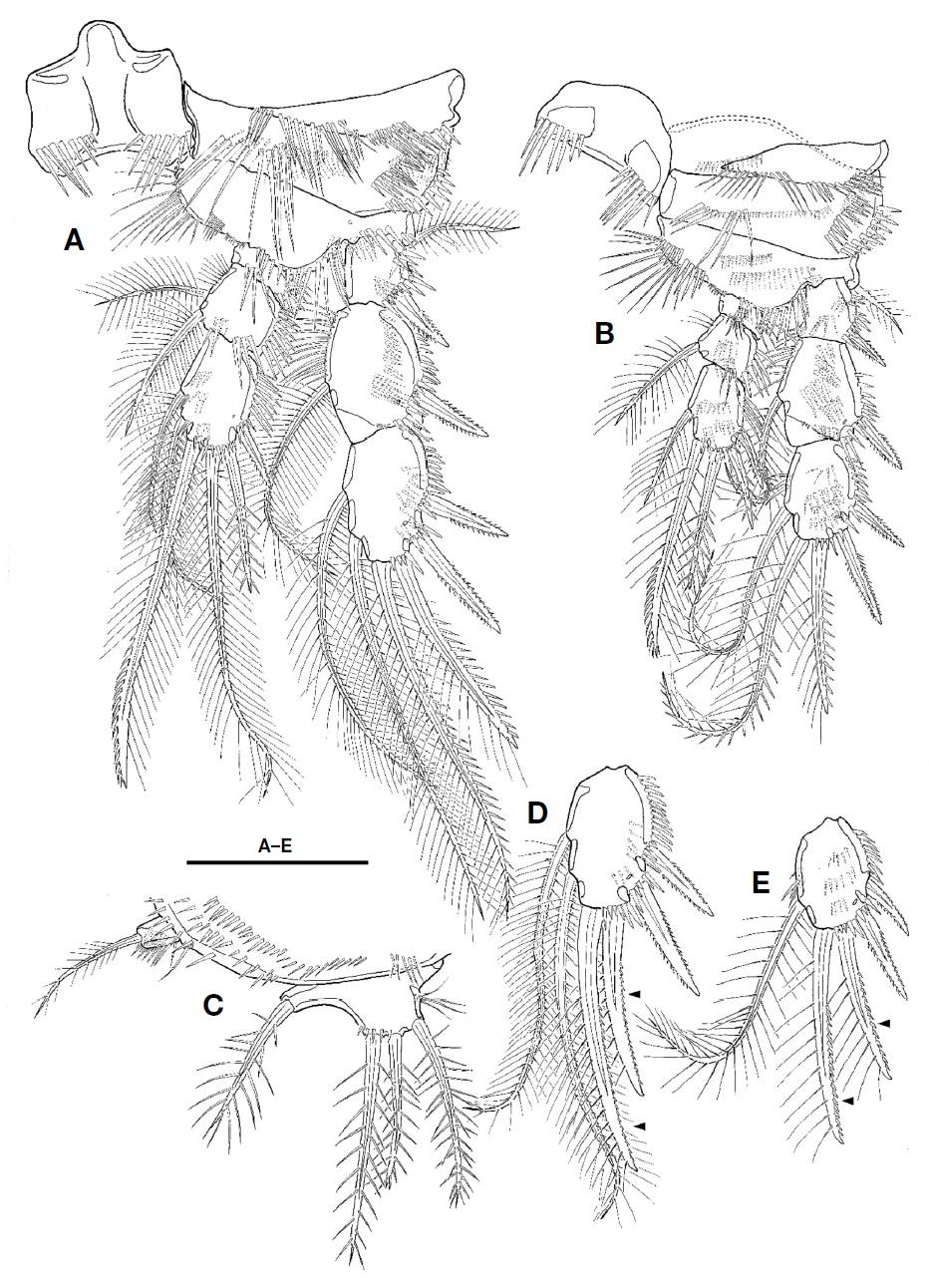 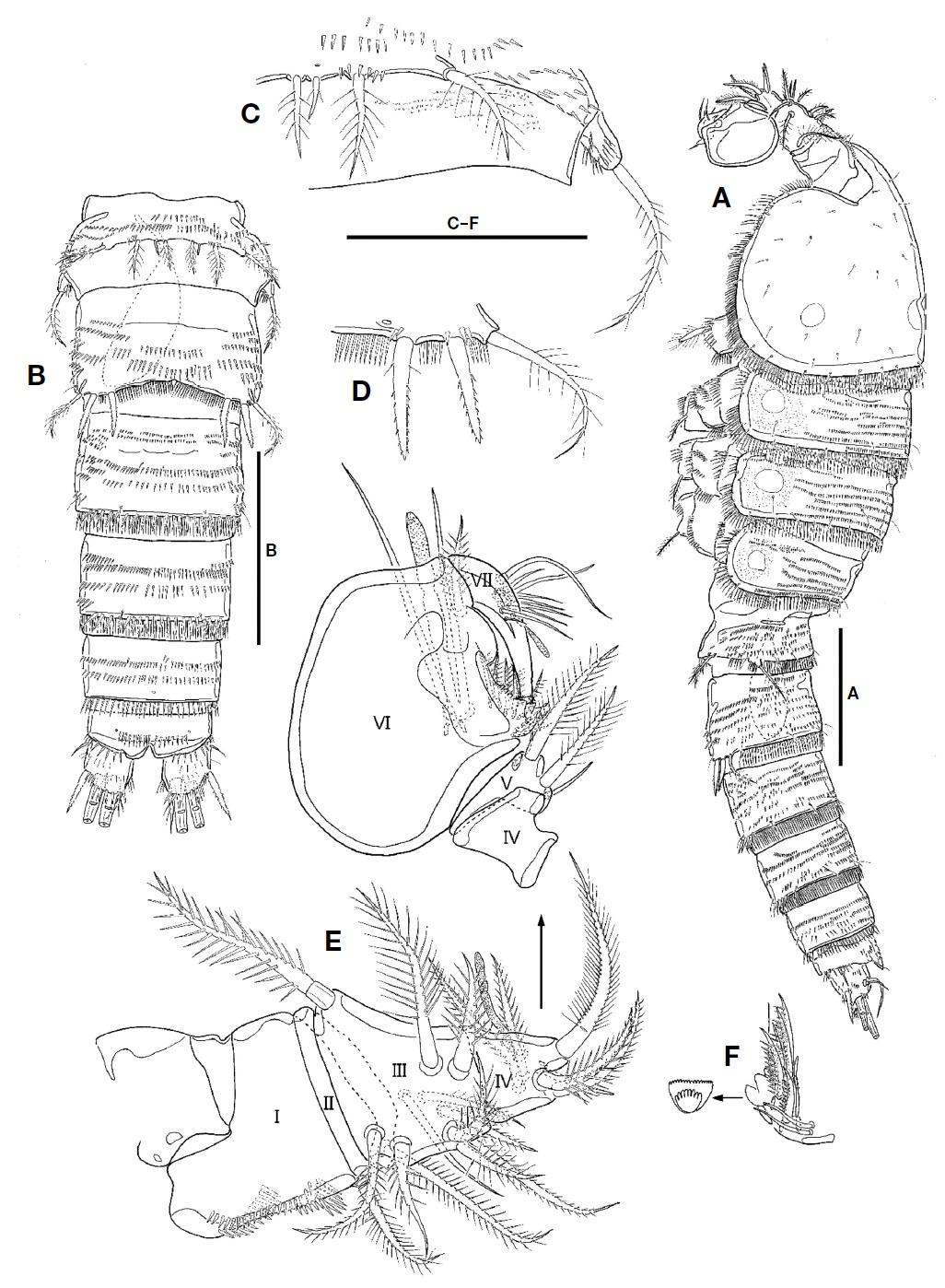 P1 as female except for distal inner seta on enp-3, which plumose, not pinnate distally (Fig. 4C).

Remarks. The Korean specimens examined in the present study are herein attributed to M. littorale (Poppe, 1881) in the following diagnostic features for females: 6-segmented antennule, antennary exopod with four setae totally, P1 enp-3 with five setae, P2-P3 enp-2 with two setae, respectively, and P5 represented by a single plate bearing four plumose setae (Boxshall and Halsey, 2004; Kihara and Rocha, 2007; Tran and Chang, 2012). However, our specimens differ from the representative records of M. littorale (Poppe, 1881; Scott, 1892; Gurney, 1932; Borutsky, 1952; Tai and Song, 1979; Huys et al., 1996) by the following: (1) the maxillipedal syncoxa is armed with six groups of spinules and one group of long setules, while it is ornamented with only two rows of spinules in the records of Poppe (1881) and Gurney (1932); (2) the maxillipedal endopod has one long and one very small accessory setae, whereas it is armed with only one long seta in the materials of previous records; (3) both anterior and posterior surfaces of the swimming legs are armed with several rows of setules or spinules, while these ornamentations are absent or simple in previous records; (4) the distal inner setae on enp-3 of the swimming legs are distally serrate, whereas it is plumose in previous records; (5) the inner apical seta of P2 enp-3 in males is slightly swollen at its proximal, while it is not expanded in the records of Gurney (1932) or Huys et al. (1996). These morphological details hitherto have not been considered as key characters to identify Microarthridion species, although detailed features such as body ornamentation pattern, pores and sensilla pattern, and the feature of the setae on swimming legs have been noticed as characteristic features in modern harpacticoid taxonomy (Huy et al., 2005; Kihara and Huys, 2009; Karanovic and Cho, 2012; Fiers and Kotwicki, 2013).

For male M. littorale, the Korean materials typically display well known sexual dimorphism of the genus with the outer apical seta of P2 enp-3 remarkably reduced (Fig. 4E). In addition, for the first time, sexual dimorphisms in swimming legs were observed from these Korean materials of M. littorale. The distal inner seta on P1 enp-3 is distally serrate in females, while it is plumose in males (Fig. 4C). The two apical setae (Figs. 4D, 5D, E) on exp-3 of P2-P4, inner one of which is decreasing in length, are modified with size reduction of the outer spinules in the males. Such modification of the apical setae is not present in the females.

Microarthridion littorale Poppe (1881) is euryhaline with a wide distribution, ranging from estuarine to shallow subtidal localities (Huys et al., 1996). It has been found in Europe, North America, and East Asia (Chang, 2008). However, taxonomical records (Poppe, 1881; Scott, 1892; Gurney, 1932; Borutsky, 1952; Tai and Song, 1979; Huys et al., 1996) of this species are ambiguous in details. They represent some discords from each other in the following characters:

(3) It is generally known that the second innermost seta on the female P5 is as long as the neighboring setae in M. littorale (Poppe, 1881; Scott, 1892; Gurney, 1932). The Korean materials of the present study also have the same feature. However, the seta in the materials of M. littorale from China and Russia was smaller in length (about half) compared to other neighboring setae (Borutsky, 1952; Tai and Song, 1979).

(4) Morphological differences between the previous records of M. littorale are also found in the armatures of the antennule, antenna, and mouth appendages and in the ornamentation of the swimming legs. However, these discrepancies might be due to observational errors or poor descriptions by the previous authors. It is well known that such incomplete descriptions from the oldest records can increase taxonomic confusion on most harpacticoid taxa, including Ectinosomatidae Sars, 1903 (Kihara and Huys, 2009).

These discrepancies in detailed morphological features might be mainly caused by poor and brief descriptions as mentioned above. Among so-called M. littorale, nevertheless, M. littorale sensu Tai and Song (1979) from China is probably a species distinct from Microarthridion littorale (Poppe, 1881) based on its small body size, the segmentation of antennule, and the length of the second inner seta on female P5 endopodal lobe. If those Chinese specimens indeed have 5-segmented antennule, they should not be coincided as M. littorale (Poppe, 1881) because the segmentation of the antennule is presently considered as an important identification key in the taxonomy of the genus (Kihara and Rocha, 2007; Tran and Chang, 2012). However, the real meaning of these morphological discrepancies merit further study with materials from China, Europe, and other regions.

Microarthridion littorale reported from north-west Europe, North America, and East Asia (Huys et al., 1996; Chang, 2008). Schizas et al. (1999) have reported that M. littorale populations along the southeastern Atlantic and Gulf of Mexico coasts of the U.S.A are structured over large geographic scales (hundreds of kilometers) based on molecular data. Considering the existence of morphological discrepancies among regional populations as mentioned above, these results suggest that many new species are probably situated under the name of M. littorale. Recently, Fiers and Kotwicki (2013) have revealed that there are differences among specimens from several regions on Europe attributed to Nannopus palustris Brady, 1880 which is known to have a worldwide distribution. As a result, they have introduced four new species and one new combination by detailed morphological study. Therefore, a revision for so-called M. littorale is urgently needed. The present study could provide basic information for such study.