Two cold-water coral taxa, Octocorallia in the class Anthozoa and Stylasteridae in the class Hydrozoa, were identified. Deep-water samples were collected in fishing nets at depths ranging between 20 and 200 m along the coasts of the East Sea in Korea from 1976 to 1993. The two species found in this study represent new records for Korea: Paragorgia arborea (Linnaeus, 1758) in the class Anthozoa, and Stylaster profundiporus Broch, 1936 in the class Hydrozoa. Two families, Paragorgiidae and Stylasteridae, are also newly recorded in Korea. Furthermore, the species name of another cold-water gorgonian species, Primnoa pacifica (Kinoshita, 1907) in the family Primnoidae, is amended in this report. The two newly recorded cold-water coral species from Korea are described in detail based on their morphological characteristics. Paragorgia arborea is characterized by its growth form, medulla and cortex, zooid dimorphism, canal system, and spicule composition. Stylaster profundiporus is distinguished by its external skeletal characteristics, such as the coordination of dactylopores and gastropores, presence or absence of gastrostyles and dactylostyles, cyclosystem orientation, ampullar position, gastropore tube shape, and coenosteal texture.

The distribution of five cold-water coral taxa (Scleractinia, Zoanthidae, Antipatharia, Octocorallia, Stylasteridae) is influenced by various environmental factors, including depth, slope, temperature, substratum, and current velocity (Freiwald et al., 2004; Roberts et al., 2009). The specific morphological characteristics of Octocorallia in the class Anthozoa and Stylasteridae in the class Hydrozoa that have developed in response to the cold-water conditions are reviewed below.

Two gorgonian families of the class Anthozoa, specifically, Paragorgiidae within the suborder Scleraxonia and Primnoidae within the suborder Calcaxonia, are well known as cold-water coral taxa. These octocorals have a certain degree of flexibility, with their non-rigid internal axis allowing them to bend with water currents. This characteristic is not found in the Scleractinia or Stylasteridae (Roberts et al., 2009).

The paragorgids or “bubblegum corals” of the family Paragorgiidae have dimorphic polyps, and are among the largest corals (up to 10 m in height). These corals represent the most ecologically important sessile benthic deep-water organisms in the ocean (Sánchez, 2005), and are broadly distributed, occurring as deep as 4,152 m (Freiwald et al., 2004; Roberts et al., 2009). While the medulla of these corals is not well consolidated, it contains a dense concentration of calcareous spicules that are bound by strands of gorgonin. Furthermore, the medulla is not separated from the cortex by a ring of boundary canals (Dunn, 1982). There are two genera of paragorgids, Paragorgia and Sibogagorgia. The genus Paragorgia is distinguished from the genus Sibogagorgia by the presence of polyp sclerites and medullar canals (Sánchez, 2005). The genus Paragorgia contains 15 species according to the World Register of Marine Species (van Ofwegen, 2010a), including Paragorgia arborea. Paragorgia arborea is a cold-water gorgonian species that is characterized by its growth form, medulla and cortex, zooid dimorphism, canal system, and spicule composition.

Five species of primnoids from the family Primnoidae have been recorded in Korea (Song, 1981, 2004): Primnoa reseda pacifica (Kinoshita, 1907), Callogorgia pseudoflabellum Bayer, 1949, Plumarella spinosa Kinoshita, 1907, P. rigida Kükenthal and Gorzawsky, 1908, and P. adhaerans Nutting, 1912. The other cold-water gorgonian species, Primnoa pacifica (Kinoshita, 1907) in the present study, was reported in Korea as P. reseda pacifica by Song (1981). According to the World Register of Marine Species (van Ofwegen, 2010b), the genus Primnoa contains 6 species, including P. pacifica.

One family of the class Hydrozoa, the Stylasteridae or “hydrocorals” within the order Stylasterina, is the second most species-rich of the 77 hydrozoan families. This family contains 224 valid species, including 24 exclusively fossil species. Some stylasterid species have commercial value in jewelry manufacturing. Consequently, all stylasterids are listed in Appendix II of the Convention on International Trade in Endangered Species of Wild Fauna and Flora (CITES) in 1990 (Cairns, 2011a).

The stylasterids or “lace corals” are a significant cold-water taxon. They are fragile, usually small, uniplanar to slightly arborescent colonial hydrozoans of the phylum Cnidaria. This taxon is distributed from the Antarctic to the Arctic circle and occurs at depths ranging from 0 to 2,789 m (Cairns, 2011a). The genus Stylaster contains 97 valid species and includes 24 fossil species, with 153 records matching the species in the World Register of Marine Species (Cairns, 2010). The stylasterids have dimorphic polyps that are characterized by the coordination of dactylopores and gastropores, presence or absence of gastrostyles and dactylostyles, cyclosystem orientation, ampullar position, gastropore tube shape, and coenosteal texture (Cairns, 1992).

This study provides a detailed description of two new records of cold-water corals from Korea based on their morphological characteristics, Paragorgia arborea of the class Anthozoa and Stylaster profundiporus of the class Hydrozoa.

All specimens examined in this study were collected in fishing nets at depths ranging between 20 and 200 m along the coasts of the East Sea, Korea, from 1976 to 1993. The specimens were anesthetized with menthol for 6-8 h and fixed in 4%-5% (v/v) formalin with seawater. The specimens were then washed with tap water and preserved in 70% alcohol (v/v).

For identification, the internal and external morphological characteristics of each specimen were examined using stereomicroscopes (Semi SV-6 and SV-11; Carl Zeiss, Jena, Germany; and S8APO; Leica, Wetzlar, Germany) and a light microscope (Eclipse 80i, Nikon, Tokyo, Japan). Characteristics included growth form, branching pattern, size of each part of the colony, arrangement of polyps on stems and branches, coloration, and shape and size of sclerites in the polyps and coenenchymes. To examine the sclerites, a small piece of tissue from each body part was dissolved in a diluted solution of Clorox for 5 min.

Before fixation, the specimens were photographed using a digital camera (G7; Canon, Tokyo, Japan). Photographs of the arrangement of the polyps and branches, as well as cyclosystem orientation, were taken using two separate stereomicroscopes (Semi SV-11; Carl Zeiss and S8APO; Leica) mounted with two different digital cameras respectively (5060-WZ; Olympus, Tokyo, Japan and DFC 290; Leica). The sizes and intervals of the polyps and cyclosystems were then measured using an image analyzer (LAS Version 3.6; Leica). Images of sclerites were taken using a light microscope (Eclipse 80i; Nikon) mounted with a camera (DS-5Mc; Nikon). Then, the sizes of sclerites were determined using an image analyzer (NIS-Elements BR 3.0; Nikon). In addition, an image editing program (HeliconFocus 5.1 Pro; Helicon Soft, Kharkov, Ukraine) was used to create a single completely focused image of a sclerite from several partially focused images by combining the focused areas.

For identification and classification, the generic revision of the Stylasteridae by Cairns (2011a) and the systematic revision of the Paragorgiidae by Sánchez (2005) were used, along with the review of phylogenetic patterns in the phylum Cnidaria by Daly et al. (2007). Some of the samples examined in this study were deposited in the Korean Coral Resource Bank (KCRB), while other samples were housed in the Natural History Museum, Ewha Womans University, Seoul, South Korea.

Diagnosis. Colonies with an axis or internal axial-like layer (medulla) composed predominantly of sclerites that are either unfused or fused with calcite. Medulla contains endodermal canals and solenia, without a central cord. Colonies generally cylindrical, composed of two layers separated by a ring of longitudinal boundary canals. Proximal portion of polyps embedded in coenenchyme (cortex) with endodermal canals and solenia.

Diagnosis. Medulla perforated by 3 or more large canals in the terminal branches, with numerous smaller canals occurring in both the medulla and subsurface/outer medulla. Autozooid tentacles with sclerites. Surface sclerites 6 to 8 radiates, always less than 0.1 mm in length, with smooth, globular, grooved, or lobulated ornaments. Axial medulla with unfused spindles up to 0.6 mm in length; other sclerites less than 0.15 mm in length.

Table 1.Measurements (mm) and shapes of sclerites in Paragorgia arborea 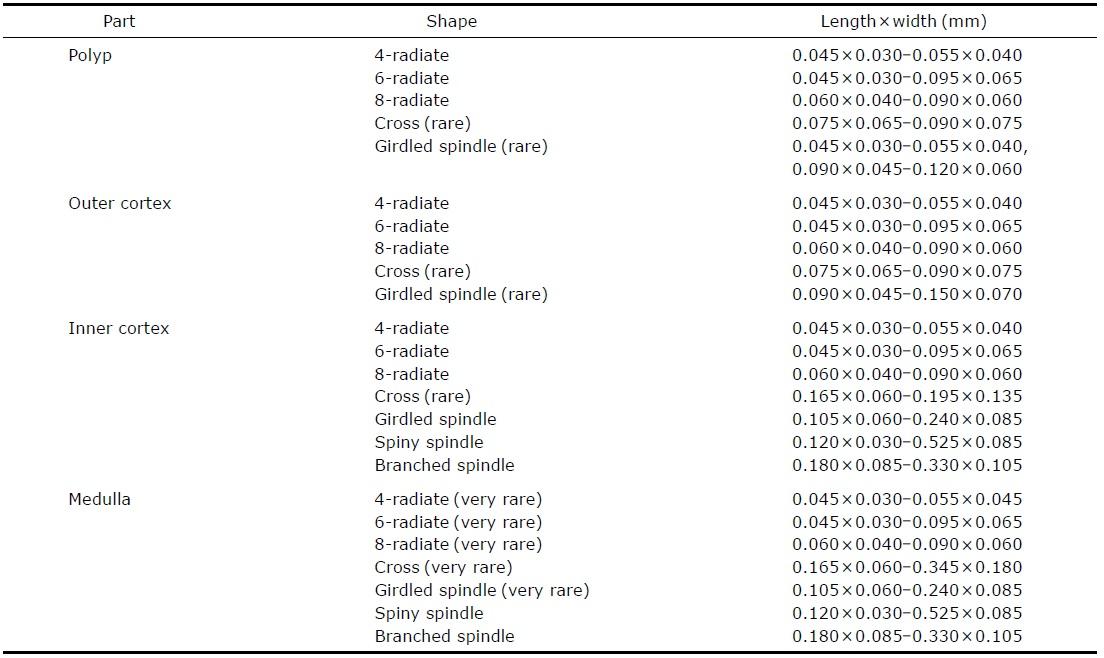 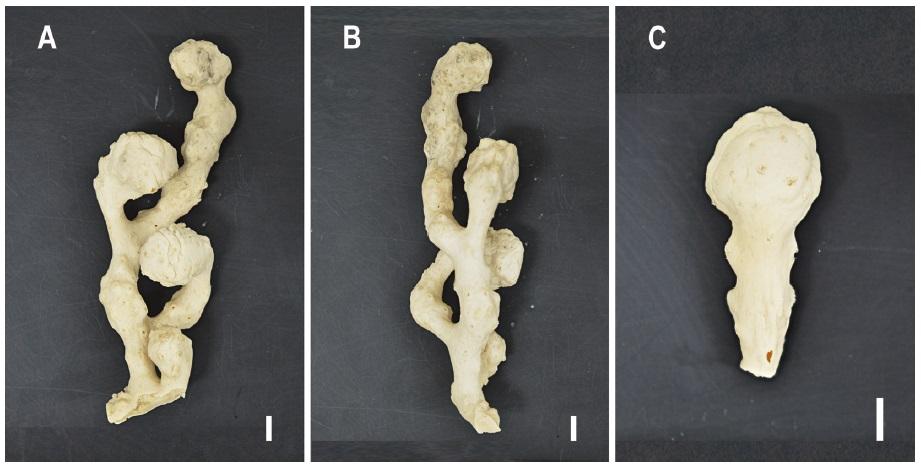 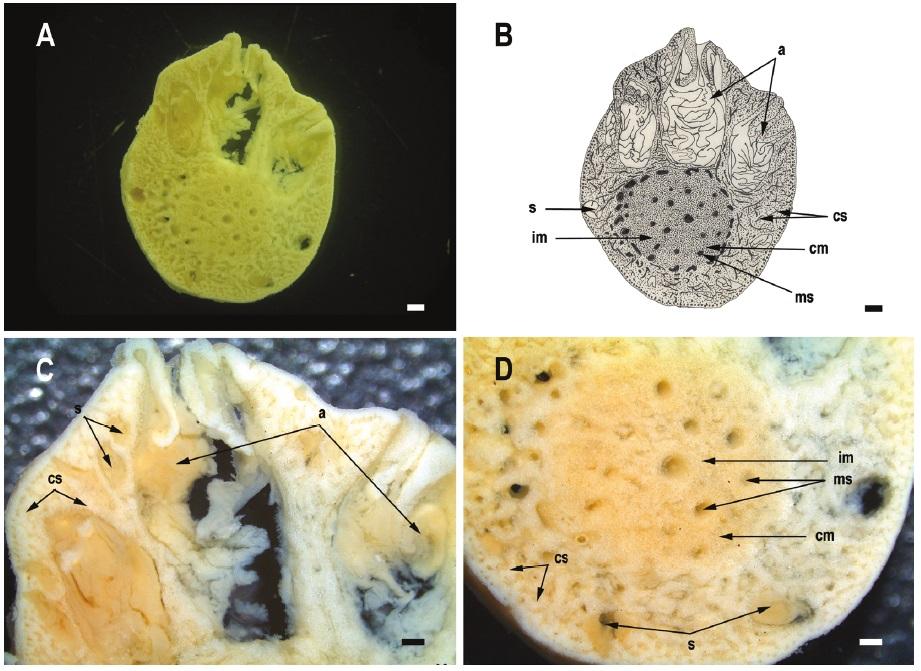 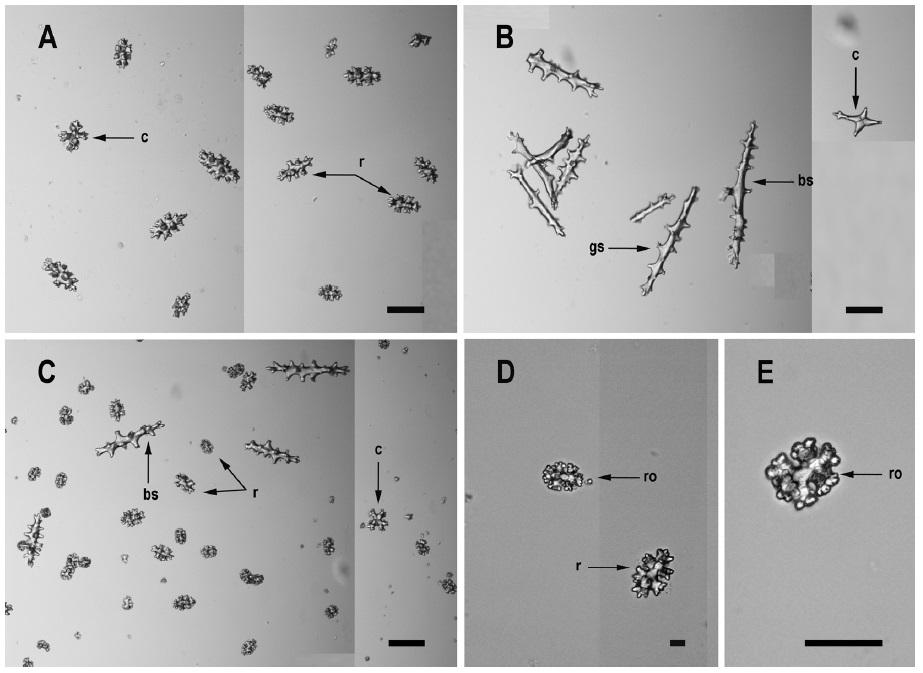 Polyps dimorphic, autozooids and siphonozooids. Autozooids, 3.0×2.5-4.0×3.0 mm in diameter, completely retracted into coenenchyme, forming rather large hemispherical verrucae with 8-rayed orifices, 4×4-8×9 mm in diameter, clustered in groups on frontal faces of colonies and on tips of distal or lateral branches, and composed of terminal and lateral zooids. Autozooid nodules 15-25 mm in diameter, irregularly situated on narrow parts of branches. Coelenterons on all sides connected with cortex-solenia. Basal part of coelenterons reaching as far as, but not penetrating, medulla.

Inter-nodular surface with numerous and uniformly distributed tiny siphonozooid apertures, appearing as simple pores in rind. Siphonozooids present all over colony, irregularly scattered in vicinity of autozooids, penetrating far into cortex, but not reaching medulla.

In polyps and cortex, shape and size of sclerites similarly developed: 4-, 6-, 8-radiates, crosses, and girdled spindles. In surface of cortex, 6- or 8-radiates with subdivided and grooved ornaments developed. In inner cortex and medulla, large spiny spindles with branching processes developed. Ratio of radiates to spindles 1 : 1 in inner cortex and 1 : 9 in medulla. After decalcification, spindles of medulla separated as other parts, not anastomosed. On polyp bodies, sclerites densely arranged, extending from calyx margin to back side of tentacles.

Colonies orange-yellow when alive, but milky white with pale yellow white medulla when preserved in alcohol. All spicules colorless.

Remarks. The characteristics of the specimens mostly agree with those of Verseveldt (1940) and Sánchez (2005); however, there was variation in the sizes of the sclerites from the different parts of the colonies.

Diagnosis. Gorgonians with an axis of gorgonin containing large amounts of non-scleritic calcite (as internodes or embedded in gorgonin), without a hollow, cross-chambered central core.

Remarks. The characteristics of these specimens mostly agree with those of Aurivillius (1931) and Cairns and Bayer (2005); however, the specimens present some differences in the sizes of the scales from the different parts of the colonies. When alive, colonies are assumed to be pink (Cairns and Bayer, 2005) or orange-yellow (Mortensen and Buhl-Mortensen, 2005), but when preserved in alcohol, the colonies are milky white with an axis of glossy metallic yellow. In a previous study (Song, 1981), 1 specimen collected from the deep waters of Ulleung-do Island in the East Sea, Korea, in July 1976, was very large (up to 2 m in height) and retained gonads in the polyp bodies. 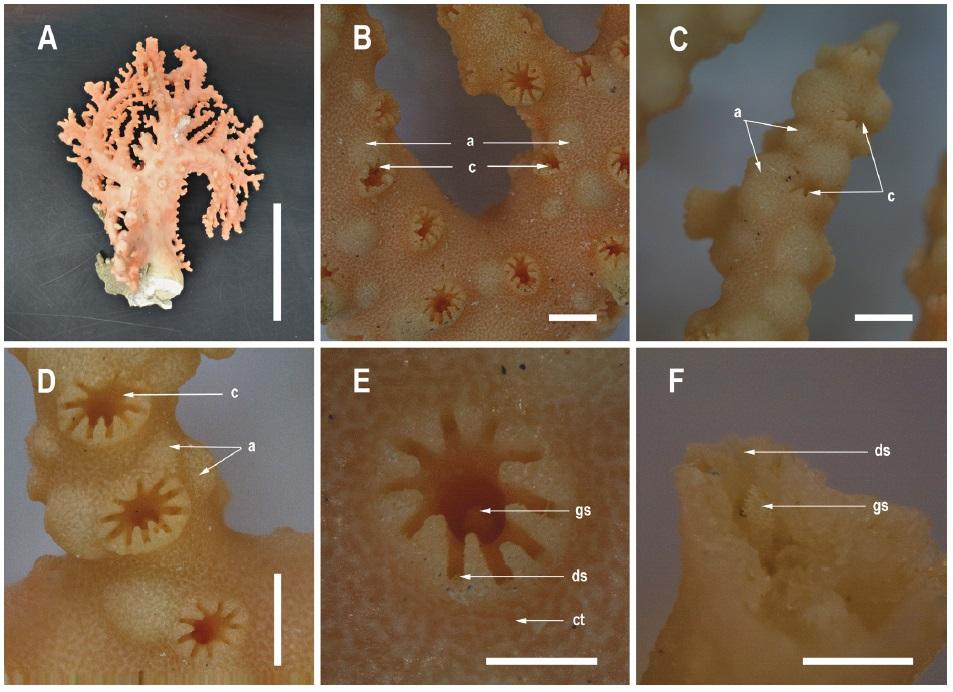 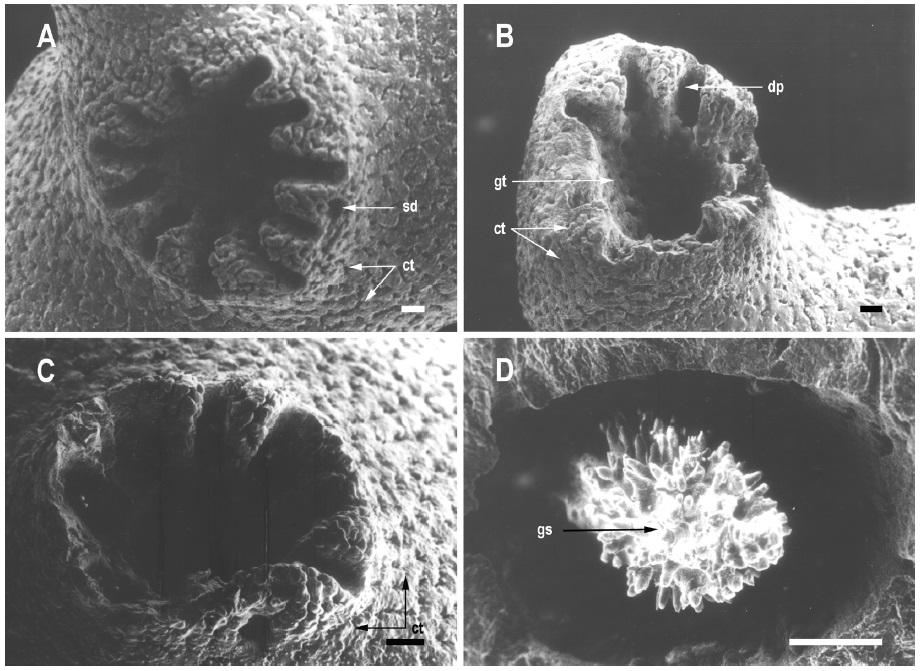 Cyclosystems circular or oval, slightly protruding above surface, 0.1-0.3 mm in height. Cyclosystems 0.6-1.2 mm, gastropores 0.2-0.5 mm in diameter. Number of dactylopores per cyclosystem (n=100) 5-12, mostly 7-9, mode 8 (Table 2). Dactylopores slit-like, narrow, and arranged in a radial ring like spokes of a wheel, length shorter than diameter of gastropore mouth. Interspaces between slit-like dactylopores shaped like petals of a plume flower. Gastropore tubes cylindrical, straight to curved, about 1.0-1.8 mm deep, each bearing a lanceolate gastrostyle (0.6-0.8 mm in length, 0.2 mm in diameter) covered with sharp spines having a short stalk, 1/2-1/3 of tubes in length. Dactylostyles sometimes rudimentary.

Remarks. The characteristics of the specimens mostly agree with those of Broch (1936) and Eguchi (1941, 1968), but differ slightly in the number of dactylopores per cyclosystem and in the depth of the gastropore tubes.