Bee pollen is produced by honeybees and is considered one of the most balanced and nourishing nutritional supplements available. Historically, bee pollen has been prescribed for its healing properties and consumed for its high-energy supply. Recent research has provided evidence that bee pollen has diverse biological activities, such as anti-oxidant, anti-inflammatory, anti-bacterial, and even anti-cancer effects. However, the outer membrane of the pollen grain, exine, is highly resistant to most acidic solutions, high pressure, and even digestive enzymes, and the resulting low bioavailability limits its nutritional and clinical applications. This study applied a wet-grinding method to destroy the exine effectively, and it then examined the pollen's enhanced biological activity. First, microscopic observations provided strong evidence that wet grinding destroyed the exine time-dependently. In addition, the content of polyphenols, well-known ingredients of bee pollen and used as internal standards for the quality control of commercial pollen preparations, increased up to 11-fold with wet grinding. Further, the anti-oxidant activity demonstrated on the ABTS anti-oxidant assay, as well as the DPPH radical scavenging assay, was also dramatically increased. Together, the results presented here support a new technology by which bee pollen can be used as a resource for medical, nutritional, and cosmetic applications.

Bee pollen is a raw material produced by worker honeybees that has been historically used as an apitherapeutic. It is produced when the bees collect pollen from plant anthers and mix it with a small dose of salivary gland secretions or nectar [10]. Bee pollen is the source of bee bread via anaerobic fermentation, and it contains organic materials, such as amino acids, nucleic acids, enzymes, vitamins, and hormones [7, 10]. According to a recent report, the average proportions of the main ingredients in air-dried pollen are 32.8% proteins (including 11.5% essential amino acids), 40.7% reducing sugars, 12.8% lipids, 0.19% vitamin C, 0.07% β-carotene, and 4.0% bioelements [10]. Bee pollen is considered a highly balanced nutrient and has been used for allergies, antibacterial and antifungal effects, appetite stimulation, arthritis, benign prostatic hypertrophy, colitis, diuretic dysentery, eczema, immunomodulation, memory, skin care, and weight loss [22].

Each bee pollen grain has an outer wall called the exine, which is composed largely of sporopollenin and is resistant to most acidic and basic solutions, as well as to hot water and high pressure. It has been shown that exines cannot be decomposed in the gastrointestinal tracts of most animals. Instead, when bee pollen is ingested, it reaches the digestive tract and begins to swell, and only the contents of a submicroscopic area of the grain’s wall can be released [4]. As a result, although bee pollen has diverse biological effects, its low bioavailability limits its nutritional and clinical applications; for adults to achieve beneficial effects, 20-40 g of bee pollen a day is recommended. Therefore, there is an increasing need to develop new technologies to facilitate the absorption of the bioactive components of bee pollens.

Nanotechnology is conducted at the nanoscale and is used across almost all scientific fields. In the medical and pharmaceutical fields, it is applied for detecting tumor cells, delivering nanomedicines through the skin or gastrointestinal tract, enhancing radiation therapy, and extending the pharmacokinetic properties of drugs [2, 3, 15, 20]. In the food industry, nanotechnology is used in agriculture, food processing and packaging, and supplements [13, 18]. Since the exine interrupts the elution and absorption of bee pollen’s bioactive components, manipulating raw bee pollen into nano-sized particles may enhance the bioavailability of these components. To satisfy this unmet need, this study, for the first time, developed a process to break raw bee pollen grains into nano-sized particles using wet grinding technology, and identified the resultant enhanced biological effects.

Bee pollen underwent wet grinding for 1 to 5 hr with a Rotate Mill (Ilsin Nanotechnology Co., Ltd., Japan). The particle size of the wet-ground bee pollen was determined with the photon correlation spectroscopy technique on a particle-size analyzer (Mastersizer 2000, Malvern, England), as described by Nair et al. [14]. Briefly, samples were diluted 50×, 100×, or 200×, then vortexed for 1 min before size determination to reduce the aggregation of the pollen grains. The particle-size analyses were performed in triplicate.

The total phenolic contents of the bee pollen samples were determined with Folin–Ciocalteu reagent in an alkaline medium, and expressed as gallic acid equivalents [16]. The reaction mixtures contained 100 μl of each diluted extract, 50 μl of freshly prepared Folin–Ciocalteu reagent, and 150 μl of 20% sodium carbonate. The final mixtures were diluted to 1000 μl with deionized water. The mixtures were kept in the dark under ambient conditions for 2 hr to complete the reaction, and then the absorbance at 765 nm was measured with a spectrophotometer. Gallic acid was used as a standard and the results were calculated as gallic acid equivalents (mg GA/g) of the extracts. The reactions were conducted in triplicate.

The 2,2-azino-bis (3-ethylbenzthiazoline-6-sulfonic acid) (ABTS) radical cation decolorization assay was performed using Re’s method [19]. Seven mM of ABTS was added to 2.45 mM of potassium-persulfate, and the reaction mixture was incubated at room temperature in the dark for 16 hr. Next, the absorbance of the reaction mixture was measured for dilution using ethanol with an OD value of 0.7-0.9 at 734 nm, then 100 μl of the sample was added to 900 μl of ABTS, and the reaction mixture was incubated at room temperature for 5 min. Its absorbance was measured at 734 nm. All of the determinations were carried out in triplicate. Trolox was used as a positive control, and the capability of scavenging the ABTS radical was calculated using the following equation:

The antioxidant activity of bee pollen was measured on the basis of the scavenging activities of the stable 1,1-diphenyl-2-picrylhydrazyl (DPPH) free radical [12]. The DPPH radical scavenging activity was measured against a blank at A517 using a spectrophotometer. The value of SC50, which is the concentration of the sample required to scavenge 50% of the free radicals, was calculated with the regression equation prepared from the concentration of various extracts, and the percentage inhibition of free radical formation was assayed. A synthetic antioxidant reagent, L-ascorbic acid (AA), was used as a positive control and all tests were carried out in triplicate.

First, to test whether the bee pollen grains could be broken into enough pieces for the exines to be destroyed by wet grinding, the pollen underwent wet grinding for 1-5 hr with a rotating mill. As shown in Fig. 1A, compared to the controls, wet grinding for 1 hr broke the grains into small pieces, although larger particles were also observed (arrows). As the duration of wet grinding increased up to 5 hr, the larger particles gradually disappeared. To examine the morphological changes caused by wet grinding, electron microscopy was employed. As shown in Fig. 1B, the bee pollen mixed in water had a round-ball shape with germinal pores (arrow), indicating that the exines were not destroyed by simply mixing bee pollen with water. Wet grinding for 1 hr clearly broke the exines, although the particle size was around 1 μm. The particle size decreased as the duration of wet grinding increased. 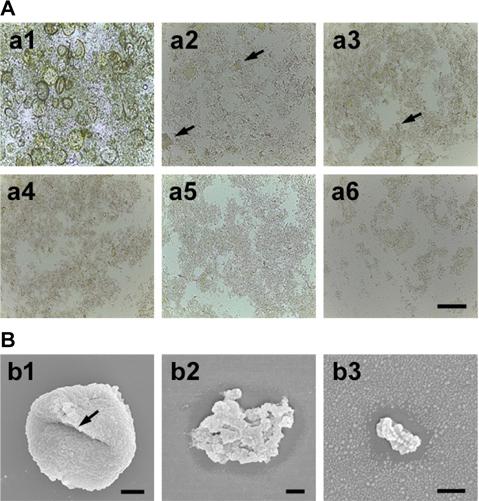 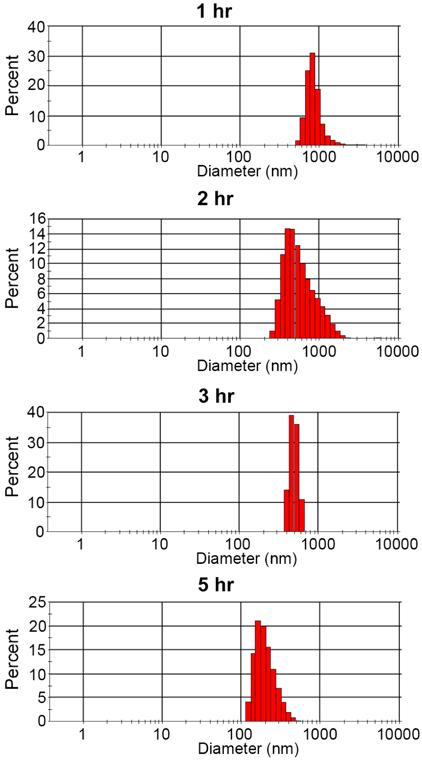 Next, to test whether the concentrations of the active components of bee pollen were increased in the solution after wet grinding, the concentration of polyphenols in the bee pollen mixed in water and homogenized for 30 min was measured and compared to that of the pollen that underwent wet grinding for 3 hr. Surprisingly, the polyphenol content of the wet-ground bee pollen was dramatically increased compared to the bee pollen mixed in water with homogenization (Fig. 3). 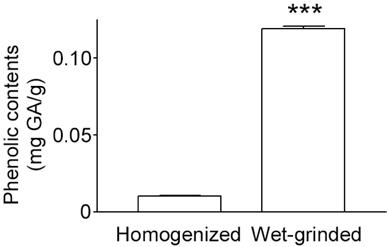 Fig. 3.Enhanced extraction of bioactive compounds from bee pollen with wet-grinding. Total phenolic contents were increased by 11.9 folds by wet-grinding for 3 hr. Garlic acid was used as a standard and the results were calculated as garlic acid equivalents (mg GA/g) of the extracts. The reactions were conducted in triplicate. ***, p<0.001.

In this study, a wet grinding process for bee pollen was developed to maximize the extraction of active components, and the data indicated that as the duration of wet grinding increased to 5 hr, the mean size of the particles decreased to 207.2 nm. This suggested that the exines of bee pollen grains could be broken with wet grinding, and that the active components of the pollen could be released into the media. In accordance with this, the concentration of total polyphenols was increased up to 11-fold by wet grinding, and antioxidant activity was significantly increased. Taken together, these data indicate that wet grinding can be an ideal technology to formulate bee pollen for oral administration.

Bee pollen is known to have diverse biological properties. For example, in one clinical study, bee pollen combined with honey improved blood-lipid composition by decreasing total cholesterol by 18.3% [8]. In addition, in atherosclerosis patients who did not react to fenofibratum, bee pollen successfully lowered the level of lipids and cholesterol by 20%-30% [10]. Furthermore, accumulating in vitro evidence indicates that bee pollen has antioxidant, antimicrobial, anti-inflammatory, and even antitumor properties [17, 21, 23]. However, although bee pollen performs diverse biological activities as noted above, its nutritional and clinical use is limited because it is difficult to destroy the exines in the digestive tract. For example, when the pollen grains of poppies (Papaver rhoeas) were digested with pancreatic enzymes, only 26% of the carbohydrates and 48% of the proteins were digested [6], and when bee pollen is swallowed after chewing without shredding, the bioavailability is only 10%-15% [10]. Therefore, 20-40 g of bee pollen a day is recommended for adults for therapeutic purposes. In order to increase bio-availability, maceration of bee pollen in water for several hours is required [4].

To enhance bioavailability, the wet grinding method was employed in this study. Wet grinding is a milling process that produces a small-particle solution from a solid, using a liquid such as water. In the present study, the exines were not destroyed by homogenization even after 1 hr. However, the particle size decreased as the duration of wet grinding increased, which means that the exines were successfully destroyed. In addition, the total polyphenol concentration in the wet-ground media was increased by 11-fold. The polyphenol compounds in bee pollen account for 1.4%-1.6% of the total content, and include kaempferol, naringenin, quercetin, and hesperetin [5, 10]. There are many reasons for selecting polyphenol substances as markers of the efficacy of wet grinding. First, bee pollen contains a significant amount of polyphenols, which can be used as internal standards for the quality control of commercial pollen preparations [1, 11]. In addition, accumulating evidence has established the relationship between polyphenol content and antioxidant activity [1]. Along these lines, the radical scavenging activity of bee pollen was tested with the ABTS and DPPH assays, and was shown to be remarkably increased by wet grinding.

Wet-grinding-mediated bee pollen preparations will create new opportunities for cosmetic and medical applications. As noted above, bee pollen has diverse biological properties, including strong antioxidant activity, and in terms of cosmetic applications, it has anti-melanogenesis and anti-aging properties [9, 17]. Although bee pollen has been known as a good candidate for cosmetic applications, it is essential to develop proper methods of extracting the active ingredients. However, diverse extraction factors, such as extraction solvent, time, and temperature affect the composition and the biological activities of the pollen [9]. The wet grinding method provides an optimized solution because pure water is used as the solvent and mechanical cracking is performed, and thus almost all of the active ingredients become available.

This study described a new technology to extract bioactive ingredients from bee pollen, and provided evidence supporting the idea that wet grinding technology could be an appropriate method for maximizing the effects of bee pollen in the fields of cosmetics and medicine.