In this paper, we propose to analyze the physical characteristics of a planar dual-composite right-left handed transmission line by a common application of Bond Graph approach and Scattering formalism (Methodology S.BG). The technique, we propose consists, on the one hand, of modeling of a dual composite right-left metamaterial transmission line (D-CRLH-TL) by Bond Graph approach, and, it consists of extracting the equivalent circuit of this studied structure. On the other hand, it consists to exploiting the scattering parameters (Scattering matrix) of the DCRLH-TL using the methodology which we previously developed since 2009. Finally, the validation of the proposed and used technique is carried out by comparisons between the simulations results with ADS and Maple (or MatLab).

This reduction of size in electronic circuits (antenna and microwave circuits) is becoming increasingly important in the production of small-size millimeter-wave systems [1]. This led us, nowadays, to increase the use of metamaterials technology for the production and development of transmission lines (TL) [2]. To obtain the required compact sizes and a multi-band functionality, the producers of electronic circuits operating at high frequencies, often, prefer to use composite right/left handed (CRLH) transmission lines in particular the dual-CRLH transmission lines [3], principally, to the design of dual-band impedance inverters, as well as wideband band pass filters. Unfortunately, despite the advantage of the metamaterials the use of this technology [4] presents a major problem in the analysis of physical characteristics (such as the reflection and transmission coefficients, dispersion relation and frequency response) and electrical modeling of these types of electronic circuits and antennas. The major problem revealed when changing parameters, structure, equivalent circuit of metamaterial transmission line that we want to make, it forces us to redo the work (studies) from the start without being sure of the efficiency of the found results. For this reason, this paper is focused on the study of new analysis and modeling technique for D-CRLH transmission lines based on the jointly use of the scattering formalism and the bond graph approach often called “Scattering Bond Graph Methodology” [5]. The proposed method is fast, effective and does not need to repeat the study of the system in case of conflict.

The bond graph approach [6] is a multidisciplinary analysis and modeling tool of physical systems (automatic, electric, acoustic, mechanical and thermodynamic ...), it is within the reach of all non-specialists. It constitute a major asset in its use, jointly with the scattering formalism [7], (in the study of systems operating at high frequencies: microwave circuits, antenna patch, open split ring resonators OSRRs and complementary split ring resonators CSRRs) [8].

Throughout this paper, we present our own analysis technique of physical characteristics of a dual composite right/left handed transmission line using the scattering bond graph methodology.

First, we will present the procedure of modeling technique of unit cell CRLH transmission line by bond graph approach. Second, we will apply this technique to a dual CRLH-TL. Then, we will extract directly the equivalent circuit of the proposed cell from its bond graph model. Finally, we will analyze the characteristics of the studied structure by exploiting its scattering parameters S11, S12, S21, S22 based on the analytical exploitation procedure of the scattering parameters developed in [9].

To demonstrate and validate our technique, a comparative study, by simulation of the founded results, is proposed. In this work we will use the ADS and Maple (or MATLAB) for simulations [10].

Unfortunately, there is no specific definition of the term “metamaterials”. But, referring to the works of Caloz [11], Solymar and Shamonina [12], metamaterials are defined as artificial effectively homogeneous electromagnetic structures with unusual properties not readily available in nature. Therefore, they consider “metamaterials” like those artificial structures in which the unit cell size is much smaller than the guided wavelength of the effective artificial medium [13]. This technology can be implemented and used in various microwave applications and in different planar or multi-layer technologies; indeed, a relation between the effective parameters of metamaterials with those of transmission line is required. For this reason, metamaterials can be analyzed by means of transmission line theory [14].

In recent article [5, 21], we studied the characteristics of a transmission line section by the bond graph approach. It behaves like a combination of a series impedance Z in conjunction (shunt) with a shunt admittance Y (and vice versa) [16], like the Fig. 1 and Fig. 2 indicate it.

Fig. 1.The proposed model of TL in its ZY structure with incident and reflected waves

Fig. 2.The proposed model of TL in its YZ structure with incident and reflected waves

The second structure is given by the Fig. 2.

The second type of bond graph model, often noted BGMYZ, is given by the following figure:

The model of CRLH-TL in its ZY structure with the incident and reflected waves at the entry and the exit ports is given by the following figure.

Fig. 5.ZY structure of the CRLH-TL with all waves

Note that the CRLH-TL can take other structure often called YZ structure.

The bond graph model of the previously structure is given bellow. 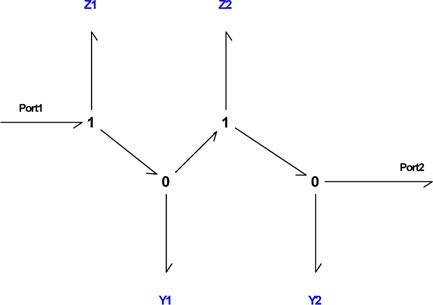 C and L are respectively the capacitance and the inductance behaviors of the CRLH-TL.

The analysis of the physical characteristics of any structure (antenna, microwave circuits…) by scattering bond graph approach constitute to extract, directly, the scattering parameters from the reduced and causal BG model of this structure by respecting the rules developed in [19]. From those scattering parameters (S11, S12, S21, S22), we can perform other analyzes such us: dispersion relation, frequency response. The new analysis technique consists, first, to affect the reduced causality to non-causal Bond Graph model. Then, to put the model in the form of a bond graph cell intercalated between the input port 1 and the output port 2. In the case where the system is complex, the decomposition in the form of a cascade bond graph cells takes place. The extracting of the scattering matrix is performed by an analytical method that we developed in [19]. The causal and global bond graph model of CRLH-TL is given bellow.

Among the important properties of the bond graph approach is that it gives us the right to simplify the model without changing its physical behavior, in particular the spread of incident and reflected waves through the system [20]. Hence the new simplified model the following figure: 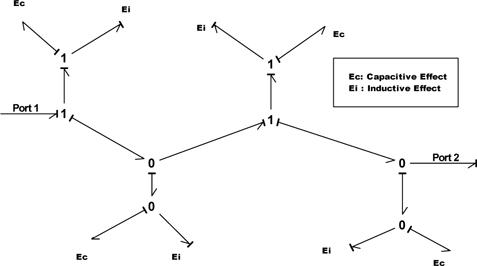 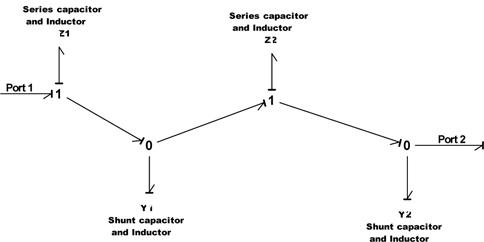 The decomposition of the above model in the form of sub-model BGMZY, leads us to the following figure: 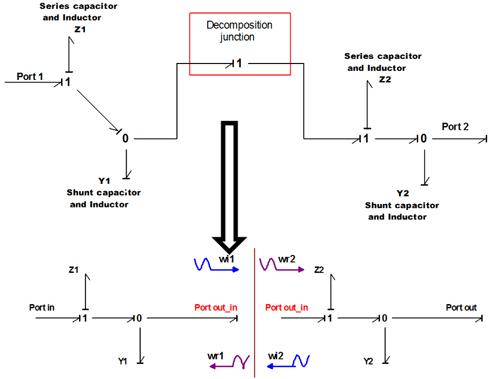 From each cell (BGMZY), we can extract, directly, the wave matrix Wzy [21].

And the scattering matrix S can be deduced directly from the wave matrix W. [21]

The physical characteristics analysis of the D-CRLH unit by bond graph approach, consists of determine the frequency response and the dispersion relation of this structure. This determination is performed after completing the bond graph model of the structure and then to extract the scattering matrix by the analytical methods developed in [5].

The famous goal of using the bond graph approach, which facilitates the determination of equivalent circuit of the D-CRLH structure, which will lead in turn to other important analyzes.

We take the example of the structure proposed by Liu, Q.-X. Chu, and J.-Q. Huang in their paper [23], where they considered that the D-CRLH transmission line consists of one interdigital capacitor paralleled by two high impedance stubs, and four series branches of the plane capacitor and stub [23]. 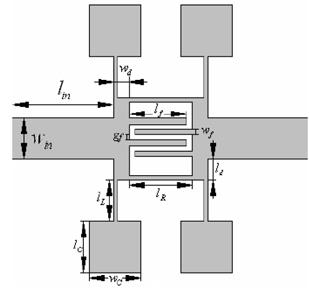 The analysis [27, 10, 28] of the above structure, will lead us to build its global bond graph model as shown in the following figure.

Where: C and I are, respectively, the capacitive and the inductive effect through the D-CRLH TL.

● Interpretation: The bond graph approach graph model the structure as a parallel branch (junction 0) of a parasitic capacitor Cp in parallel with an inductance and capacitance Ls and Cs series. This branch, in series with another series branch (junction 1) bringing together in parallel Lsb inductance (which models the stub) with the inductance Lp (inductive parasitic effects) and the C*s series capacitance (series capacitive effects) [10]. As the structure is symmetric, we add the same input branch (parallel branch) to the output. Hence the bond graph model with all the resonant elements of the D-CRLH TL structure. [24]

Based on the properties of bond graph approach, the above model becomes a reduced and simplified model (BGMYZ) as shown in the following figure. 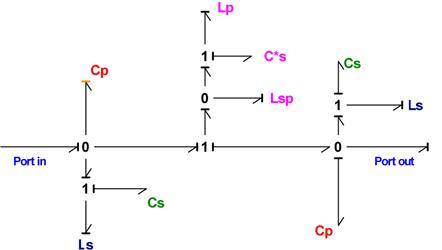 Fig. 12.Bond Graph model of the D-CRLH with all resonant elements

The normalization [7] of the resonant elements according to the internal impedance Z0 gives us the reduced values of the bond graph approach such as the following equations: 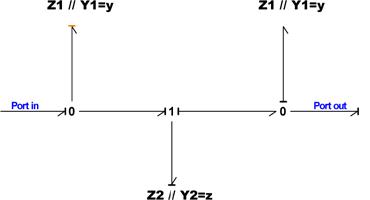 Fig. 13.Reduced and simplified Bond Graph model of the D-CRLH

The scattering parameters, by referring to equations 8 and 9, are given bellow.

The experimental results of D-CRLH TL, performed by Liu, Q.-X. Chu, and J.-Q. Huang in their paper [23], are given below, where they used the HFSS and a mathematical approximations to realize and simulate the equivalent circuit of the proposed system. 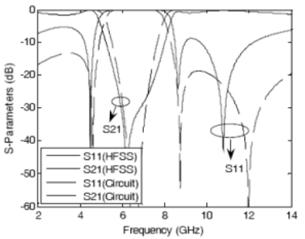 Our discussion is to refuse the mathematical approximations used to produce such a circuit equivalent since they cannot provide precise and even inaccurate results. Hence the object of the use of the bond graph approach that provides accurate equivalent circuits and leads to accurate simulations and the phenomenon is reversible [28, 24]. We note that Liu, Q. et al. in their paper [23], used HFSS and the approximations of the equivalent circuit to find the results above. Our research team uses the scattering bond graph method to find the same results that we are looking for, we can evaluate and simulate the scattering parameters by our own method, and we can also extract the equivalent circuit any model simple or complex [9-10]. 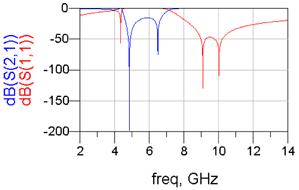 Fig. 15.Simulation results of S11 and S21 parameters by BGM

The exploitation of the equivalent circuit of the D-CRLH TL, by bond graph approach, is to use the reverse properties of this approach.

From Fig. 11, we can give directly the equivalent circuit of the D-CRLH TL. 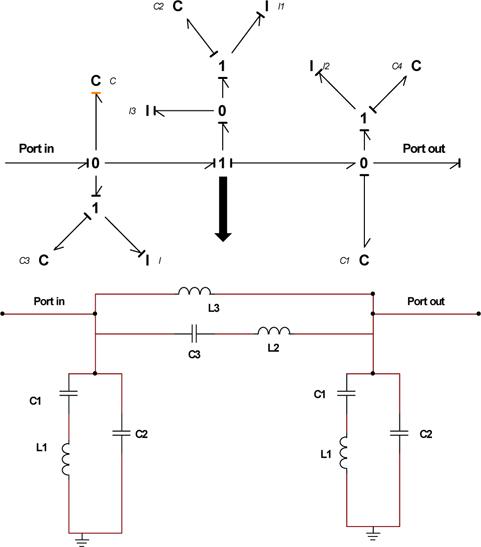 Fig. 16.From Bond Graph to equivalent circuit of DCRLH TL

The reverse properties of Bond Graph approach [27, 28], consists of transform the capacitive and inductive effect to lumped elements [25] by taking into account the equations developed in our recent article [24].

A scattering Bond Graph methodology is proposed. This methodology is simple, flexible and fast which facilitates the study of many types of transmission line. It can give us an equivalent circuit which can be fabricated by using lumped elements and with minor error. This method is very easy for a non-specialist staff how find, always many problems in analysis, design and electrical modeling study. Agreements between equivalent circuit simulated and scattering bond graph parameters responses are demonstrated.