In this study, we have dealt with a design characteristic of outer-rotor type permanent magnet (PM) motor applied for Engine Cooling Fan (ECF). When we design a motor with structure like this type, it is required as a requisite to consider 3-Dimensional (3-D) effect by implementing a non-linear Finite Element Analysis (FEA) due to a yoke-ceiling, which is perpendicular to the axis of rotation. We have analyzed identical models under three different conditions. The analysis has been performed through a non-linear 2-Dimensional (2-D) and 3-D FEA. Finally, the results have been compared with Back Electro-Motive Force (BEMF) value of actual motor model. As a result, a yoke-ceiling function as an additional flux path and the operating point on B-H curve of rotor material is shifted to non-saturation region relatively. Accordingly, magnetic flux linkage can be increased and motor size can be decreased under same input condition to satisfy ECF specification, such as torque.

The driving motor for Engine Cooling Fan (ECF) is usually designed as outer-rotor type since it has a definite advantage on rotation under constant speed with high inertia characteristic. Accordingly, the motors which have this structure have been used commonly in low-power and constant speed rotation applications including fan, pump, and disk drive. In addition, the power density of outer-rotor type motor is relatively greater than that of inner-rotor type since the rotor diameter of outer-rotor type is larger than that of inner-rotor type. Structurally, the rotor is generally greater than the axial length of the magnets and limits axial length simultaneously. It permits the “additional flux linkage” along the yoke-ceiling, since the permanent magnets are attached to the inside of a deep-drawn rotor. The increase of flux linkage leads to reduction of the overall size and a yoke thickness. Fig. 1 shows the structure of outer-rotor type ECF motor. 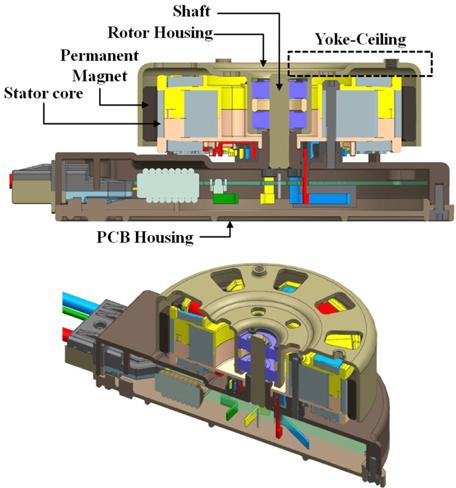 The characteristics and torque ripple reduction in outerrotor type Permanent Magnet (PM) motor have been addressed in respect of unbalanced magnetic force (UMF). However, few works have been published in terms of additional magnetic flux linkage resulting from yoke-ceiling. Jang and Yoon [1] introduce that axially asymmetric PM motor generate axial UMF and it causes torque ripple. Jang and Kim [2] expressed method for torque ripple reduction resulting from UMF through asymmetry of the permanent magnet with respect to the stator. However, these researches are not based on magnetic flux linkage but based on only magnetic force.

In this paper, the importance of 3-Dimensional (3-D) Finite Element Analysis (FEA) in terms of magnetic flux linkage for designing outer-rotor type motor considering the yoke-ceiling has been studied. Accordingly, we have analyzed identical models under three different conditions. One is 2-Dimensional (2-D) analysis model. Another is 3-D analysis model without considering the yoke-ceiling. The other is 3-D analysis one considering whole parts. The analyses have been performed through a non-linear FEA. Finally, the results have been compared with experimental results of actual motor model.

Table 1.Specification of a reference model. 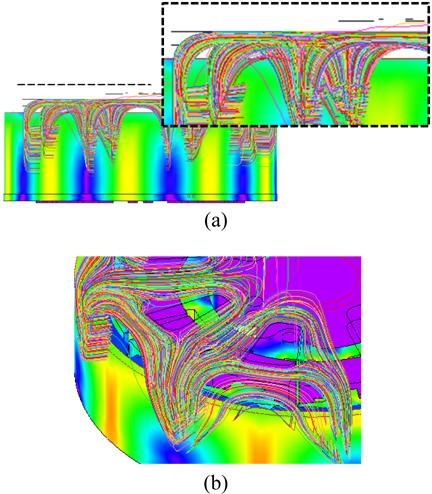 Fig. 2.Magnetic flux flowing the yoke-ceiling in 3-D model: (a) Left side; (b) Oblique side.

In 2-D model, the magnetic flux spreading along the yoke-ceiling is not considered, while it is taken into consideration in 3-D model. In other words, it is impossible to represent the yoke-ceiling in a 2-D FEA, leading to a difference between the results of the 2-D and 3-D models. For this reason, it results in the specific and overall differences such as teeth width and power density, since the amount of flux linkage passing through the rotor in 2-D model is different from 3-D model.

Fig. 3 (a), (b), and (c) show the three kinds of analysis models, respectively. (a) is 2-D analysis model, (b) is 3-D analysis model without considering the yoke-ceiling, and lastly (c) is 3-D analysis one considering whole parts. As mentioned previously, the widths of teeth and inner yoke of (a) and (b) are less than (c). Widths of teeth and inner-yoke are 3.0mm and 6.0mm each in model 1 and 2, and that of model 3 are 4.5mm and 8.0mm. Each width is minimum value for non-saturation operation. The differences between each model are summarized in Table 2 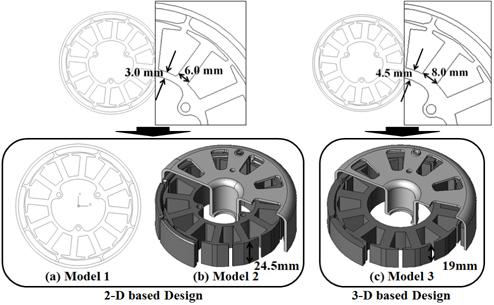 The magnetic equivalent circuit for one pole is in Fig. 4. The airgap flux per pole Φg is driven through the airgap reluctance Rg . Φr means remanent flux which is the product of remanent flux density ( Br ) and surface area of PM ( Am ). Rr and Rs represent reluctance of rotor and stator. All these parameters vary with the dimensions and material properties. Under no-load conditions it is usually adequate to consider only one pole, and to make use of symmetry. Accordingly, in Fig. 4 the quadrature axes q-q can be assigned zero magnetic potential. From Fig. 4, the flux through the magnet is in (1)

where Φm is the flux through the magnet and ΦL is the leakage flux. PL and Pm0 represent internal magnet permeance and leakage permeance respectively. In addition, the sum of these factors means magnet permeance Pm in (2). 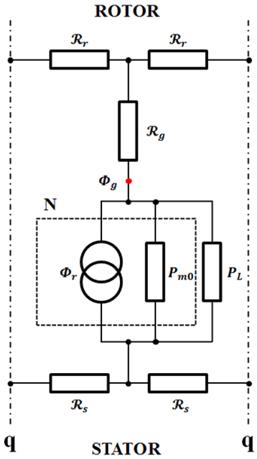 Fig. 4.Magnetic circuit for one pole.

Meanwhile, when the airgap and the rest reluctance of the magnetic circuit can be represented by a lumped external reluctance Rg' in (3), the airgap flux is given by (4).

Eqs. (1)-(4) are characteristic equations of magnetic system, and are introduced to account for difference of the magnetic flux path and flux linkage in models mentioned above. Meanwhile, Fig. 5 represents B-H curve of the rotor material in analysis model, and points I, II, and III are operating points of (a), (b), and (c) in Fig. 3. The y-values of these points are the Root Mean Square (RMS) values of the magnetic flux density at all nodes in FEA, and we assume that these are representative values of the magnetic flux density at each operation points. In Fig. 5, points II and III are in non-saturation region relatively while point I is in saturation region according to each magnetic flux density. Therefore, rotor reluctance ( Rr ) of point I is greater than that of Point II and III relatively. Lastly, according to (3) and (4), airgap flux per pole (Φg) of model considering yoke-ceiling is higher than model without considering it. This is result from the function of the yoke-ceiling, which is the part used for additional magnetic flux flowing along the rotor. 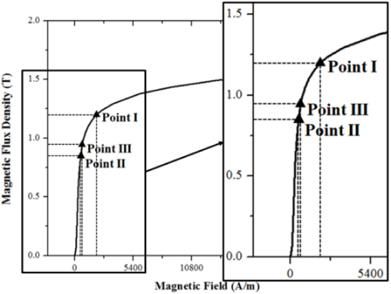 Fig. 5.B-H curve of rotor core and operating points of each model.

Models were developed in FEA to the topologies 1, 2 and 3. In model 1, 2-D FEA is conducted, as not considering yoke-ceiling. In model 2, 3-D FEA is conducted in a same condition as in model 2, except addition of yoke-ceiling. Lastly, in model 3, 3-D FEA is conducted, considering whole part from the beginning of design process. Model 1 has 18884 triangular elements and models 2, 3 have 376621, 319812 tetrahedral elements each; the number of elements in 3-D FEA models is even more than that of 2-D FEA model. The difference in terms of stack length is caused by more or less calculated flux linkage, according to whether the yoke-ceiling is considered in design process. Fig. 6 shows coil flux linkage and BEMF, and Fig. 7 shows magnetic flux density of each models. In the Fig. 6, the magnetic flux density of teeth and inner yoke in model 2 is higher than that of model 1. It is due to the additional unintended flux path, which results in more magnetic flux than expected. Table 3 shows numerical value of coil flux linkage and BEMF. These values are computed at rated speed. As can be seen from the Table 3, whole models show a difference in the coil flux linkage amount, whereby 0.007587 [Wb], 0.012716 [Wb], and 0.008774 [Wb] correspond to the 2-D and 3-D models, respectively for the proposed design. The coil flux linkage of the model 2 is 167.6 [%] of that of the model 1. This discrepancy is due to the additional flux path that is obtained in a yoke-ceiling, and the numerical value is the basis of the BEMF and power density differences. 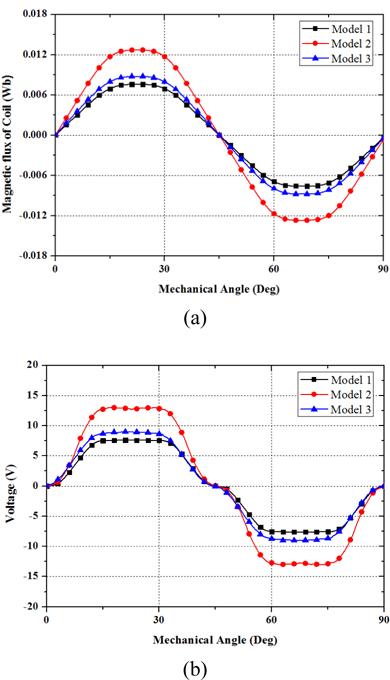 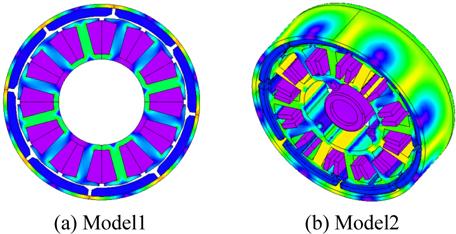 After considering the difference between the amounts of flux linkage in each model through FEA, the experimental measurement is carried out on models 2 and 3. BEMF is measured to figure out the influence of additional flux path; the test is conducted according to the yoke-ceiling effect. Universally, the increase of flux linkage is confirmed by measurement of BEMF indirectly, since the flux linkage is proportional to BEMF. Fig. 8 shows the structure of prototype motor and experimental setup for measurement of BEMF. The experimental setup consists of oscilloscope, prototype motor, and rotating stage. Fig. 9 shows BEMF measured in this experiment. The results are shown in Table 4. The BEMF of model 2 and 3 in experiment are 9.58Vrms and 6.77Vrms each, while the values are 9.76Vrms and 6.67Vrms in FEA. The error rates are 1.8% and 1.5% each. This results show the validity of FEA result and influence of the yoke-ceiling in this model, which has outer-rotor structure. 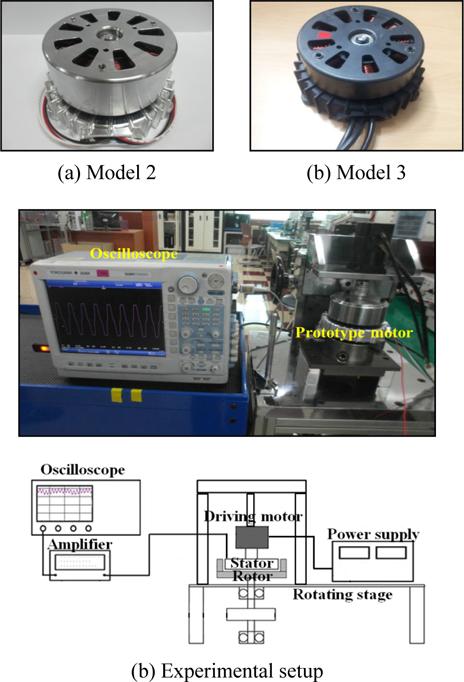 As a result, model 3 is the final model that considers influences mentioned above on the yoke-ceiling. The results of FEA and performance test are shown in Fig. 10 and table .05. Torque and cogging torque are valid in accordance with analysis and test results. Model 1 which is 2-D based design is analyzed using 2-D FEA, and model 2 which is 2-D based design is analyzed with 3-D FEA; only the yoke-ceiling is added. Lastly, 3-D based design, model 3 is analyzed through 3-D FEA; whole parts are considered in design process. In magnetic circuit having this structure, the yoke-ceiling is used as additional flux path, and it transforms magnetic flux distribution in stator and rotor. 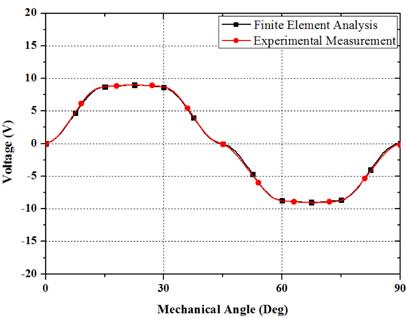 Fig. 10.Comparison of FEA and experimental measurement about BEMF.

Consequentially, teeth and inner yoke have to be designed wider than 2-D based design, since more magnetic flux has to flow. In addition, stack length must be designed shorter than 2-D based design, since BEMF increases as the analogy of flux linkage increase. BEMF and flux linkages in model 1 and 2 are different from that of model 3, since the yoke-ceiling is not considered; it is confirmed through experimental measurement. In conclusion, when we design outer-rotor type electric machine, the additional flux path spreading out beyond the permanent magnet in the rotor must be considered to determine specific size, such as teeth width or stack length.

In this paper, the influence of additional magnetic flux path is dealt with. The additional flux path enables more magnetic flux to flow along the rotor core, decreases the size, and increases BEMF in terms of performance. Accordingly, it is essential to conduct 3-D design process, when designing outer-rotor type motor with these advantages. It is way of apply influence of additional flux path, which is not considered in 2-D. It is main factor that decide specific size such as teeth width and stack length. Thus, in this paper, FEA and experimental measurement are conducted on analysis models in three different conditions to confirm the effect of additional flux path. Consequentially, the yoke-ceiling must be considered when designing motor having outer-rotor structure such as fan and blower.