This paper presents a lateral displacement restoring force control for the independently rotating wheelsets (IRWs) of shallow-depth subway systems. In the case of the near surface transit, which has recently been introduced, sharp curved driving performance is required for the city center service. It is possible to decrease the curve radius and to improve the performance of the straight running with the individual torque control. Therefore, the individual torque control performance of the motor is the most important point of the near surface transit. This paper deals with a lateral displacement restoring force control for sharp curved driving. The validity and usefulness of the proposed control algorithm is verified by experimental results using a small-scale bogie system.

For the existing high-depth subway systems, the construction fee of the operator increases. Moreover, the transfer distance and time with the existing subway also increase aggravating social cost and inconvenience of users. The diversification of transportation due to the development of cities and transportation situation focuses on shallow-depth subway systems through maximized space, excellent accessibility, and environment-friendly/future-style transportation. [1-2]

For the fixed wheelsets that are generally applied to trains, the axis is assembled where squeal noise can occur along with difficult accessibility for passengers. When using sharp curved driving technology of independently rotating wheelsets, curve radius of 15mR dejected drive is possible within the urban. Furthermore, the construction fee that occurs in accordance to the limitation of the radius of curve can be reduced, and the construction period can also be reduced. Thus, lateral restoring force control for sharp curve drive of independently rotating wheel suspension is the core technology of the low-depth urban railway system. [3-7]

In this paper, a control of the lateral displacement restoring force for sharp curved drive of the shallow-depth subway systems is proposed. The drive torque, steering torque command were made to execute this research to increase the stable drive performance without contacting the flange in the curved-railroad. Also, a small-scale bogie system was copied from the shallow-depth subway systems for the independently rotating wheelsets to verify the performance of the proposed lateral restoring force control.

The electrical analysis obtained through theory and simulation of the proposed lateral restoring force control is meaningless in the real system because electrical systems and mechanical systems are closely coupled. Therefore, validation of the proposed algorithm was made through the actual production. Moreover, to verify the validity of lateral restoring force control, the actual size of the low-depth suspension must be produced. However, for the acquisition of lines and production of urban low-depth suspension, many time and investment are needed. Thus, 1/5 scale law of similarity as shown in Table 1 was used to design and make the small-scale bogie system.

Table 1.Physical quantities according with the law of similarity 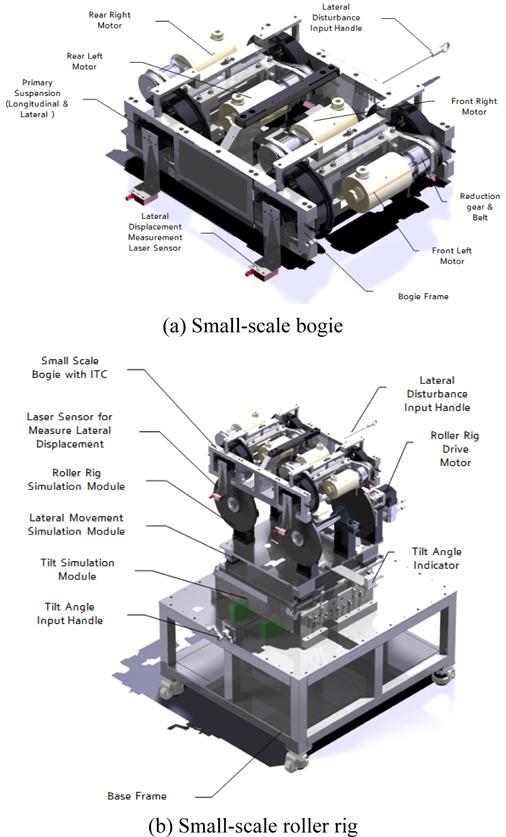 3. The Characteristics of Independent-wheel Type Motors

The size of the motor for the small-scale bogie is 1/5 scale of the actual urban low-depth train. Thus, the load torque is decided according to (1) in the base speed of small-scale motor.

where, kw : the winding factor, : the peak of the fundamental wave of the air-gap magnetic density, ac : the ratio of electric loading, β : the current phase angle, Dg : the diameter of air-gap, and Lstk : the length of axial.

For the small-scale motor, the length of each side is reduced by 1/5 where the total volume becomes 1/125. The output by (1) becomes 1/125, thus 360W. This paper considered the output margin to design 500W motor. Thus, when 15 [km/h] base speed is selected as sharp curve drive speed for the test of small-scale bogie, the load torque value in base speed in 2[Nm].

The motor of independently rotating wheelsets selected model in accordance to performance of control to independently control 4 motors. Magnetic torque and reluctance torque are the two torques that exist in the motor. In the case of reluctance torque, it occurs due to interaction of d-axis and q-axis currents. The controllability reduces compared to the magnetic torque that only uses d-axis current. Thus, the motor was designed with SPMSM (Surface Permanent Magnet Synchronous Motor) using only the magnetic torque. [8-9]

For SPMSM, CAN structure exists to prevent permanent-magnetic scattering when rotating. Due to this, there is a disadvantage of increased length of opening. To supplement the weakness of this rotor, the shape as shown in Fig. 2 was selected. The shape was similar to IPMSM (Interior Permanent Magnet Synchronous Motor), but the magnetic flux density on the rib and web part is saturated where the inductance values of d-axis and q-axis are the same. Thus, it has the same characteristic as SPMSM that only has the magnetic torque. 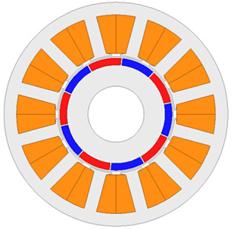 Fig. 2.The model of the motor of independently rotating wheelsets

Table 2.The specification of the motor of independently rotating wheelsets 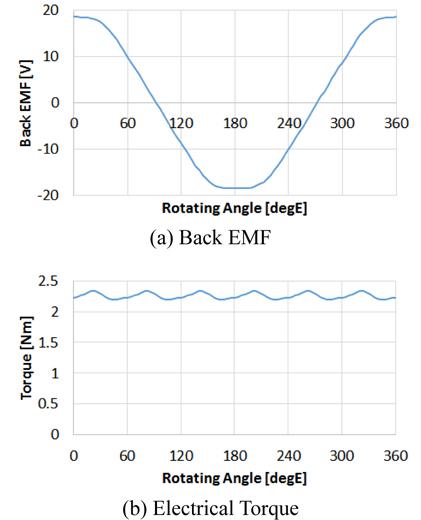 4. The Control of the Lateral Displacement Restoring Force

The motor applied to the produced small-scale bogie was SPMSM. When adding the proposed lateral restoring force control to SPMSM’s torque control system, torque control block of independent wheel motor can be composed like Fig. 4. The PMSM control algorithm in Fig. 4 is the control block corresponding to 1 motor. When 3 parallel control blocks are added, the complete control block of the independently rotating wheel motor can be obtained. To acquire the power of small-scale bogie, torque reference Tc is produced to the 4 SPMSM. Here, the lateral restoring torque reference Tl is added to the 4 motor creating the motor to create torque reference Te . The torque reference is changed to d-axis and q-axis current reference from the torque constant, and the voltage reference is formed by passing the PI current controller. The voltage reference is decides the switching status of the three phase inverter through inverse d-q transformation, and the voltage is induced to the SPMSM creating the torque desired by the motor. Here, for the d-q transformation and inverse d-q transformation, a position sensor is needed. Thus, the lateral displacement is recognized as the laser sensor creating Tl by comparing the initial status.

4.2 The control of the lateral displacement restoring force of the IRWs

Fig. 5 shows the drive of the straight-railroad and curved-railroad of independently rotating wheelsets. The dotted line shows the straight-railroad, and the solid line shows the curved-railroad. When charging into the curved-railroad and recognizing this through the lateral displacement sensor, lateral force must occur to recover attack angle α to avoid flange contact. Hereby, steering torque of each motor is required, and then Tl is created through the lateral recovering controller like Fig. 6. The lateral recovering controller commands the initial location of independently rotating wheelsets, and then receives feedback on the location of the bogie through lateral displacement sensor. Output value Tl acquired through PI controller is shown in the following (2). Here, the maximum value and minimum value of output Tl must be less than the drive torque of suspension so that reverse torque does not occur. Thus, the limiter values were set to 90% of Tc.

The independently rotating wheelsets can independently control 4 wheels creating different lateral restoring torques according to the location of the bogie. When the drive of bogie is not considered, and when lateral displacement occurs to the left like the dotted shape of Fig. 7(a), the torque on the motor corresponding to the left of the front and rear wheels shall be made for recovery to initial location to create lateral force to the right. Thus, in this case the bogie can be recovered to the initial location like the solid line. However, this is the same as pushing the bogie towards the left. Thus, the drive torque cannot be used needing a lot of recovery power, and in the worst case, recovery can be impossible. Fig. 7(b) shows the case of giving lateral restoring torque like (3).

Fig. 7.The independently rotating wheelsets in accordance with the lateral restoring torque methods

As shown in Fig. 7(b), when the bogie drifts to the left, the front wheel makes the torque to the motor that corresponds to the left, and the rear wheel makes the torque to the motor corresponding to the right. Then, the suspension moves along with the solid line, and the bogie moves right due to the drive torque. Thus, because the drive torque is used, relatively small steering torque can be used for later restoring torque, and the response is also increased. This paper proposes mechanism like this, and verified the lateral restoring torque of independently rotating wheelsets.

The small-scale bogie was made as shown in Fig. 8(a) by using 4 independent wheel motors. Each motor was in charge of the each bogie’s wheel, and it was connected through the reducer. The rotor position of the motor used encoder for measurement. To recognize the lateral displacement of small-scale bogie, 4 laser sensors were fixed on the center part of the wheel. 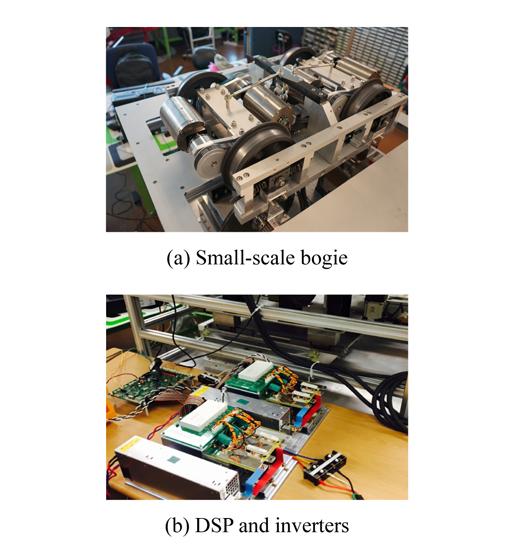 Fig. 8(b) used independent wheel motor to show the later recovering control test inverter and controller. Because of the 1C1M system, there are 4 motors. DSP used TI28335, and because 12 switching signals can be created per 1 DPS, a total of 2 DSPs were used.

The result of lateral recovering control test using small-scale bogie is shown in Fig. 9. Fig. 9(a), (b) respectively identified the lateral displacement of the front and rear wheels of the small-scale bogie, and it is the output obtained through the laser sensor. When the right and left lateral displacements are same, the small-scale bogie does not lean towards one side being able to maintain centering. Thus, it was represented that centering was maintained before disturbance occurred. Also, it was shown that recovery is possible even when disturbance occurs. Thus, the validity of the proposed lateral recovering control algorism was confirmed. Fig. 9(c), (d) respectively shows the A phase current of the small-scale independent wheel motor. When disturbance does not occur, it was identified that the magnitude of current of the left and right motors change to maintain centering. Also, when the disturbance occurs, one side created greater torque to recover lateral displacement. Because the lateral displacement occurred close to the right side, the front wheel according to (3) showed increasing torque of right motor, and the rear wheel showed increasing torque of the left side motor. This could be shown in the Fig. 9(c), (d). 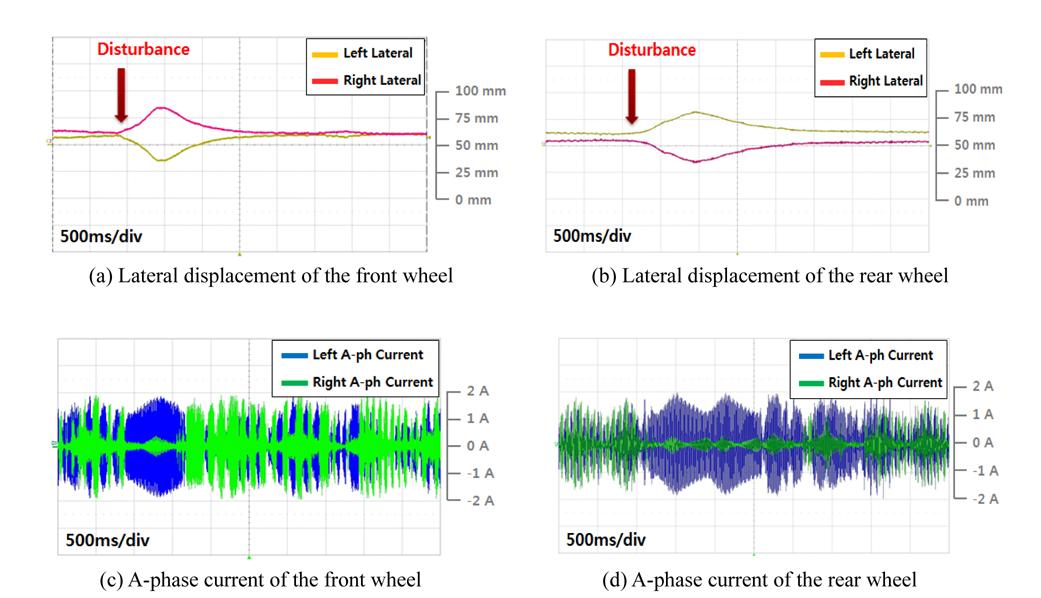 During sharp curve drive according to the characteristic of the train, noise is frequently induced due to the contact of flange. This is because 4 motors are controlled by the same torques in the 1C4M system where the flange contacts the rail for the curved-railroad. Furthermore, this induces unpleasant noises causing abrasion. Thus, the curve radius of the suspension becomes limited. This paper introduced 1C1M system using the difference of each motor torque to create lateral force proposing the algorism to avoid flange contact to solve this problem.

For the permanent magnetic synchronous motor, the torque ripple is smaller compared to the induction motor. Also, with the advantage of high torque density, it is receiving spotlight as the future traction motor. This paper designed and made SPMSM (Surface Permanent Magnet Synchronous Motor), and also applied 1/5 scale for the small-scale bogie to verify the later recovering control algorism.

Lateral displacement was measured by using laser sensor, and different torque commands were given to each motor through lateral recovering controller to avoid flange contact. When disturbance occurs in the small-scale bogie, centering can be maintained, which demonstrated the superiority of algorism. Furthermore, based on the lateral recovering algorism proposed through the small-scale bogie, it is considered that the algorism can be applied to the actual train system.