The Korea Institute of Information and Commucation Engineering (한국정보통신학회)

N-screen is a promising technology to improve support for multimedia multicasting, content sharing, content mobility, media scalability, and seamless mobility. In this paper, the WiMedia distributed-MAC (D-MAC) protocol is adopted for development of a seamless N-screen wireless service. Furthermore, to provide a multi-hop, one source multi-use N-screen service through point to point streaming in a seamless D-MAC protocol, a dynamic multi-frame transmission technology is proposed. In this technology, a dynamic time slot allocation scheme and a multi-hop resource reservation scheme are combined. In the proposed dynamic time slot allocation scheme, two thresholds, a hard threshold and a soft threshold, are included to satisfy the power consumption and delay requirements. A multi-frame DRP reservation scheme is proposed to minimize end-to-end delay during the multi-hop transmissions between N-screen devices. The proposed dynamic multi-frame transmission scheme enhances N-screen performance in terms of the multi-hop link establishment success rate and link establishment time compared to the conventional WiMedia D-MAC system. 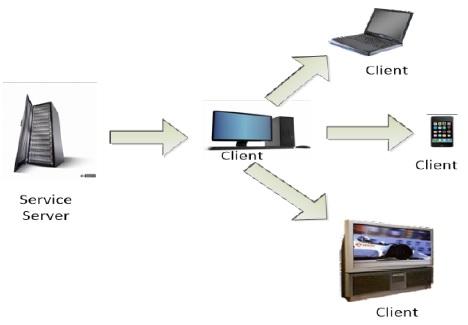 The WiMedia Alliance has specified a distributed medium access control (D-MAC) protocol based on UWB for high-rate WPANs [2-5]. WiMedia D-MAC supports a distributed MAC approach. In contrast to IEEE 802.15.3, D-MAC requires that all devices have the same functionality. Networks are self-organized and provide devices with functions such as access to the media, channel allocation to devices, data transmission, quality of service, and distributed synchronization. By adopting a distributed architecture, WiMedia D-MAC removes the simultaneous operating piconet of the 2-hop range packet collision problems of the centralized IEEE 802.15.3 MAC [4]. D-MAC employs beacons for distributed clock synchronization as well as exchanges of channel reservation information and control packets among devices [4]. In D-MAC, each node broadcasts its own beacon, which contains information elements (IEs) per periodic interval called a superframe. IEs convey control and management information required for medium access. The distributed nature of the D-MAC protocol can provide full mobility support and achieves a scalable, fault tolerant medium access method.

In this paper, the WiMedia D-MAC protocol is adopted for development of a seamless N-screen wireless service. Furthermore, to provide a one source multi-use (OSMU) N-screen service through P2P streaming in the seamless D-MAC protocol, a dynamic multi-frame transmission (DMT) technology is proposed and analyzed. For this technology, a dynamic time slot allocation scheme and a multi-hop resource reservation scheme are combined as explained in Section II. In the proposed dynamic time slot allocation scheme, there are two thresholds, a hard threshold and a soft threshold, in order to satisfy the power consumption and delay requirements A multi-frame distributed reservation protocol (MFDRP) reservation scheme is proposed to minimize end-to-end delay during the multi-hop transmissions between N-screen devices. Section III shows that the proposed DMT scheme enhances N-screen performance in terms of the multi-hop link establishment success rate and link establishment time compared to the conventional WiMedia D-MAC system. Concluding remarks are given in Section IV.

D-MAC operates per time unit of a superframe. A superframe has a fixed length of time, and it is split into a plurality of time windows called a medium access slot (MAS). A superframe consists of 256 MASs. As shown in Fig. 2, a superframe is divided into two parts: a beacon period (BP) followed by a data transfer period (DTP). Data frames are transmitted during the DTP. The MAC provides asynchronous and isochronous data communication services [4]. The isochronous service is supported by the distributed reservation protocol (DRP), which allows the bandwidth reservation to be handled in a fully distributed manner. Asynchronous service is provided by a prioritized carrier sense multiple access with collision avoidance (CSMA/CA) protocol called prioritized channel access (PCA). 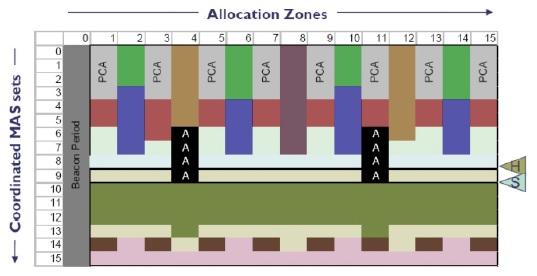 Fig. 3.Setup of the hard and soft threshold.

In this paper, an MFDRP reservation scheme is proposed to minimize end-to-end delay at multi-hop transmissions between N-screen devices. An MFDRP IE, as shown in Fig. 4, includes the MAC addresses of all devices on the multi-hop path between the N-screen sender and receiver. The MFDRP IE control field includes the N-screen stream index, DRP IE validity check request, hard threshold, and soft threshold.

Fig. 4.Format of the MFDRP IE.

The DRP IE validity check request field indicates whether each N-screen device on a path can accommodate a multi-hop MFDRP reservation request or not. Then, the sender N-screen device selects the devices that belong to the MFDRP reservation group according to the aggregated information from the DRP IE validity check results from the devices on the path. Next, the MFDRP IE includes the MAC addresses of all the devices on the final multi-hop MFDRP path, and delivers this information to all the N-screen devices through their beacons. The DRP IE and MFDRP IE include the same N-screen stream index.

This proposed dynamic HR-SR and MFDRP scheme can be extended to multi-stage transmissions. Consequently, unlike the previous DRP scheme in Fig. 5, our dynamic multi-frame transmission technology forwards several data frames during a single MFDRP MAS period at all relay devices on the multi-hop path between the N-screen sender and receiver, as shown in Fig. 6. The proposed DMT scheme minimizes the length of idle periods during multi-hop N-screen multimedia transmissions and does not require additional channel information, which generates signaling overhead. 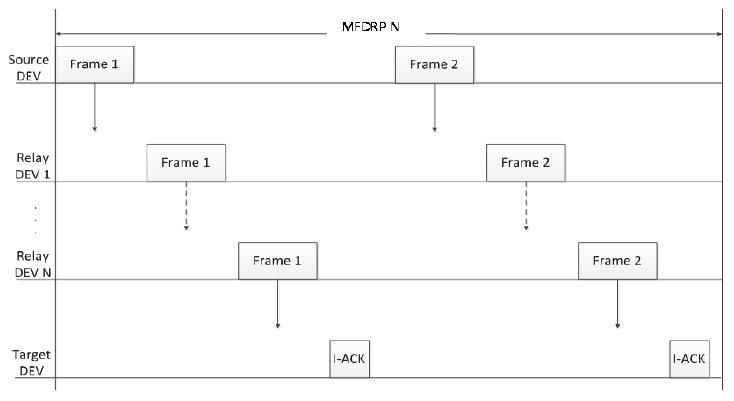 We designed a multi-hop N-screen network and simulated it for performance evaluation with WiMedia PHY/MAC parameters [4-6]. In the simulation, N-screen devices were connected through the D-MAC. Also, we consider a multimedia application with OSMU N-screen Video (ONV) streams. Here we assume that the ONV source generates an MPEG-4 stream using a real-time transport protocol (RTP) as transport.

In order to evaluate the proposed DMT scheme, we conducted an in-depth simulation study. In this study, we measured and compared the probability of successfully established ONV channels under various N-screen network load conditions using the DMT scheme and the legacy WiMedia D-MAC system. All the channel links were assumed to have the same link quality. We also evaluated their operational time to establish the default and reverse ONV links. The N-screen packet payload size transmitted by the ONV devices was 1,024 bytes. The WiMedia D-MAC beacon and the ACK frames were transmitted at a mandatory rate of 53.3 Mbps. In addition, the ONV data packets were transmitted at a mandatory rate of 200 Mbps. An N-screen network, which consists of 100 ONV nodes, was used. The values of the other parameters were consistent with the specifications in WiMedia D-MAC [4-6].

Fig. 7 is an ordinary rectangular multi-hop mesh consisting of 100 ONV nodes. We assume that the links connecting the nodes in the topology consist of two unidirectional links, each with a transmission bandwidth of 200 Mbps. In order to evaluate the probability of successful link establishment, we set the load conditions as follows. We selected source–destination pairs between the ONV devices randomly and established multi-hop default and reverse N-screen links between each pair using the DMT scheme. For comparison, we applied a legacy WiMedia D-MAC system to the same source–destination pairs and then measured the probability of success [6]. 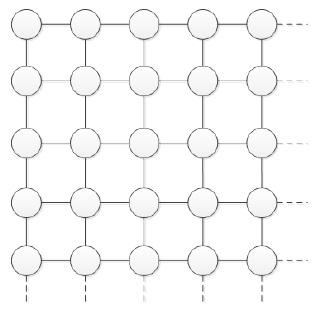 Fig. 8 shows the ONV link establishment success rates under various multi-hop N-screen network loads using both the legacy WiMedia D-MAC system and our DMT approach. In Fig. 8, when the multi-hop N-screen network is lightly loaded (i.e., the network load is under 30%), both approaches achieve an ONV link establishment success rate of almost 100%. That is, abundant resources are available in such a case, and therefore most multi-hop ONV link establishment requests are accepted. Compared to the legacy WiMedia D-MAC system, the DMT scheme shows a much higher success rate in this range. In Fig. 8, the DMT approach outperforms the legacy WiMedia D-MAC system since the DMT scheme is guaranteed to find a qualified resource for the multi-hop ONV link due to the N-screen multi-frame MFDRP IE and the dynamic HR-SR resource allocation. 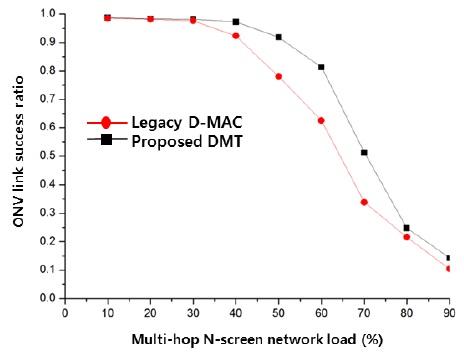 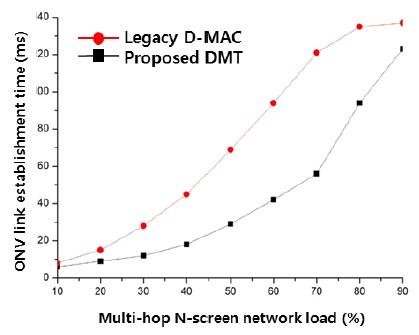 In this paper, a WiMedia distributed-MAC protocol was adopted for the development of a seamless N-screen wireless service. In this paper, a multi-hop N-screen traffic mechanism using DMT is proposed in order to satisfy the power consumption requirements and to minimize the end-to-end delay in multi-hop transmissions. The DMT mechanism is composed of the MFDRP IE and dynamic HR-SR resource allocation. In simulation results, the efficiency of the DMT mechanism is proven through a multi-hop ONV link establishment success ratio and delay performance in a rectangular mesh deployment scenario.