The expression and functional roles of microRNAs in stem cell differentiation

microRNAs (miRNAs) are key regulators of cell state transition and retention during stem cell proliferation and differentiation by post-transcriptionally downregulating hundreds of conserved target genes via seed-pairing in their 3' untranslated region. In embryonic and adult stem cells, dozens of miRNAs that elaborately control stem cell processes by modulating the transcriptomic context therein have been identified. Some miRNAs accelerate the change of cell state into progenitor cell lineages—such as myoblast, myeloid or lymphoid progenitors, and neuro precursor stem cells—and other miRNAs decelerate the change but induce proliferative activity, resulting in cell state retention. This cell state choice can be controlled by endogenously or exogenously changing miRNA levels or by including or excluding target sites. This control of miRNA-mediated gene regulation could improve our understanding of stem cell biology and facilitate their development as therapeutic tools. [BMB Reports 2016; 49(1): 3-10]

The biology of microRNAs (miRNAs), small regulatory non-coding RNAs of ∼22 nt in length, has yielded substantial understanding of the diverse cellular processes underlying post-transcriptional gene regulation and extended the gene regulatory network (1-8). Although the biogenesis, turnover, and gene regulatory mechanisms of miRNAs have been investigated extensively in the last decade, we are still uncovering new players and further extending our biological knowledge of miRNAs in diverse biological contexts. In particular, many miRNA studies have focused on stem-cell-related processes—such as proliferation, differentiation, and stemness—and the control of miRNA expression level and miRNA-mediated gene regulation used to assess the functional roles of miRNAs in stem cell processes (5,8).

Stem cells are a subset of cells that possess the dual capacity to replenish themselves by self-renewal and to differentiate into special types of daughter cells that function as components of bodily structure (21). During this unique division, also known as asymmetric division, stem cells reprogram daughter cells to specify their fate by modulating multiple regulatory mechanisms while simultaneously maintaining their own stemness. Therefore, reprogramming daughter cells is accompanied by concurrent changes in the gene expression profile both for turning off the self-renewal capacity and for turning on cell-fate specific genes. Since the first discovery of miRNAs, knowledge of their role in stem cell control has increased exponentially due to advances in stem cell research.

High-throughput sequencing technology enables simultaneous profiling of expression of miRNAs and their derivatives in diverse cell types, including stem cells (9-13), and during embryonic and developmental processes (14-16), leading to identification of miRNAs as molecular determinants in a certain cellular process, and discovery of their functional roles in that context. Simultaneously, global analysis of miRNA targets in the same cellular processes led to identification of molecular signatures; i.e., shortening and lengthening of the 3’ untranslated region (UTR), and effects on targeting in the proliferation (17-19) and differentiation (20) processes.

This review will summarize the expression signatures of miRNAs during the self-renewal and differentiation of embryonic and adult stem cells. It will also address new mechanistic advances in regulation of miRNA production and targeting and discuss the functional roles of miRNAs in stem cell differentiation. These recent advances and future studies in miRNA biology will provide alternative approaches to, and tremendous insight into, translational research and facilitate use of miRNAs in clinical applications. 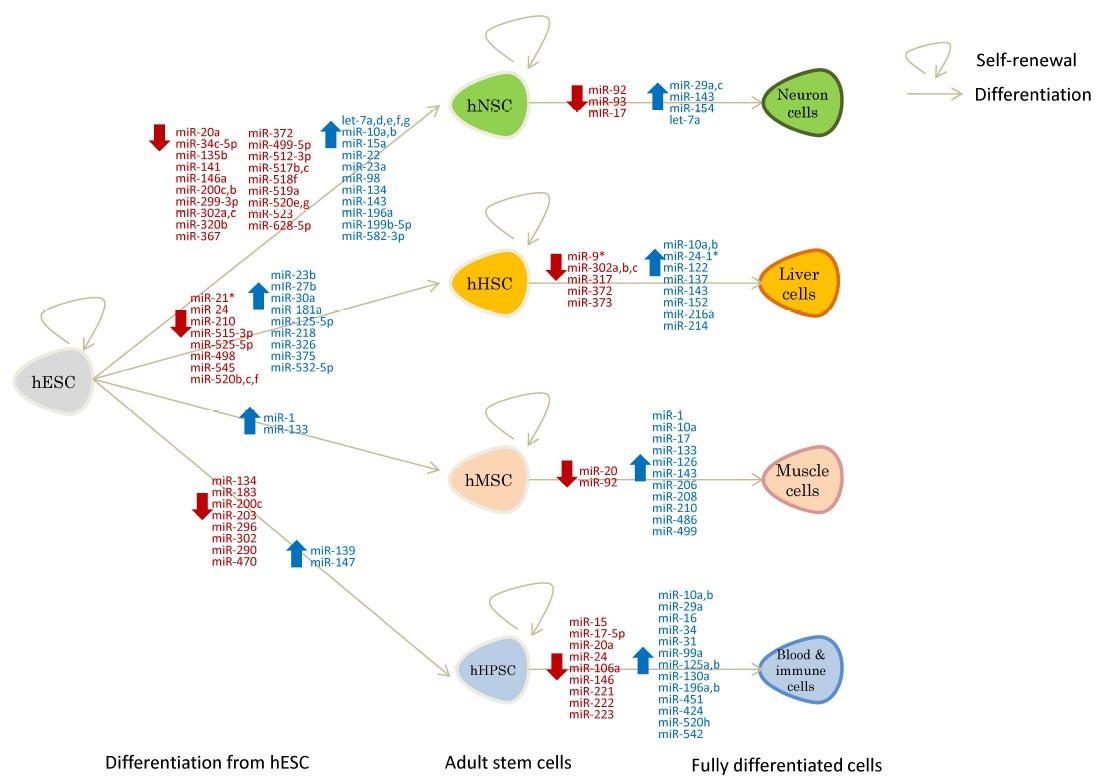 The expression of stem-cell differentiation-associated miRNAs is controlled by multi-layered regulatory processes including transcriptional, epigenetic, and/or post-transcriptional regulation. For instance, the miR-362/367 cluster is regulated by ESC-associated transcription factors (TFs), including Oct3/4, Sox2, and Rex1 (33), which induce pluripotent stem cell generation or self-renewal. Studies of transcriptional regulation of miRNA expression in ESCs have revealed that mono-cistronic or bi-cistronic miRNAs located at intergenic loci tend to be regulated by common upstream transcription regulators, whereas miRNAs located in intronic regions tend to be regulated by transcription regulators of the host gene. For example, mir-206, mir-486, and mir-499 and the bi-cistronic miRNA mir-1 and mir-133 are activated by MyoD, myogenin, and MYF5 during differentiation of human muscle stem cells (hMSCs) (34-38). Interestingly, the coherently regulated mir-1 and mir-206 in different chromosomes are members of a same miRNA family, and share a seed sequence that downregulates common targets (39).

The epigenetic regulation of chromatin structure is also involved in miRNA expression during ESC differentiation. Small-RNA sequencing (sRNA-seq) and Chromatin Immunoprecipitation followed by sequencing (ChIP-seq) of histone modification markers uncovered epigenetically modulated miRNAs during lymphopoiesis. Lymphocyte-specific miRNAs are tightly regulated by PRC1-mediated a histone 3 lysine 27 tri-methylation (H3K27me3) (40). For instance, miR-139 and miR-147 were upregulated in ProB and PreB cells by reduction of H3K27me3, while miR-152 was downregulated in the cells by the gain of H3K27me3 (40). Another recent study demonstrated that a histone 3 lysine 9 demethylase (JMJD1C), expressed in hESCs, suppresses the neural differentiation of hESCs by epigenetically maintaining miR-302 expression, and downregulation of the JMJD1C is sufficient to induce neural differentiation (26).

Post-transcriptional regulation is generally used for fine-tuning of miRNA expression by controlling either the stability of precursor and mature miRNAs or the maturation process itself. The stability of pre-let-7 is regulated by lin28, which recruits 3' terminal uridylyl transferase (TUTase) to selectively suppress let-7 miRNA biogenesis in undifferentiated cells (41). TuT4 and TuT7, which bind to lin28 via a zinc finger domain, redundantly uridylate pre-let-7, leading to downregulation of let-7 (41-43).

The functional importance of miRNA during development and adult cell differentiation has been investigated by changing its expression or manipulating its target sites in embryonic and adult stem cells. Global downregulation of endogenous miRNAs by Dicer knockout or knockdown (Fig. 2E) in adult myogenic stem cells revealed that miRNAs are indispensable for proper myogenesis and myofiber morphology formation (44). Functional analysis of individual miRNAs has been performed by either miRNA-side perturbations—loss-of-functions (LOFs) and gain-of-functions (GOFs) of miRNAs (Fig. 2A-G) or target-side perturbations—mutation, inclusion, and exclusion of target sites in mRNA 3’UTRs (Fig. 2H and I). miRNA-side LOF is a straightforward approach to identifying the targets of an miRNA and to decipher its functional roles. First, antagomir (Fig. 1A), antisense RNA reverse-complementally binding to miRNA, and sponge (Fig. 1B), RNA with multiple sites predominantly quenching endogenous miRNAs, downregulate the level of endogenous miRNAs, leading to de-repression of their targets (45-48). Memczak et al. and Hansen et al. reported that an endogenous sponge RNA for miR-7 contains ＞60 conserved miR-7 seed sites, impairing miR-7-mediated gene regulation by absorbing the miR-7 RNAs in mouse neuronal tissues, which impaired midbrain development (47,48). 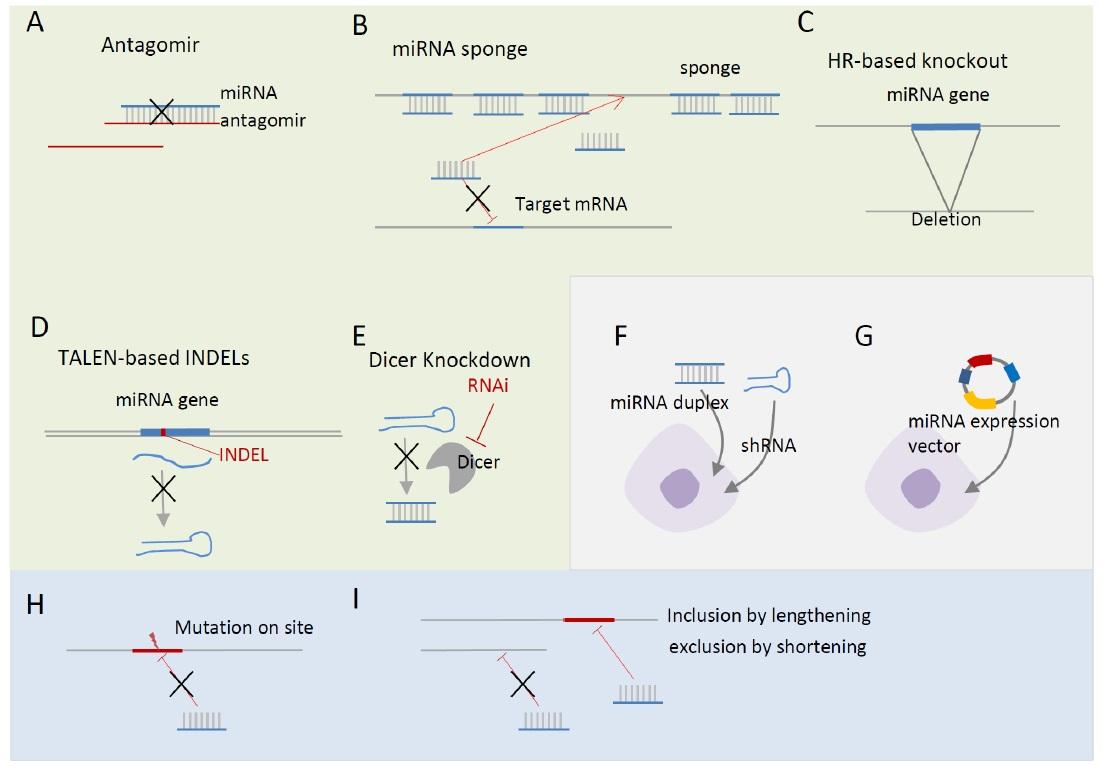 An alternative miRNA-side LOF study is knockout of an miRNA gene in the genome by homologous recombination (HR)-based (Fig. 2C) or Transcription Activator-Like Effector Nucleases (TALEN)-based methods (Fig. 2D). Although HR-based knockout is a less-efficient approach, for the last decade, tens of HR-based miRNA knockouts have uncovered the functional roles of miRNAs in diverse biological processes, including development and differentiation (49). For instance, HR-based knockout of miR-144/451 impaired the late erythroblast maturation process (50) and knockout of miR-290-295 caused embryonic development delay and germ cell deficiency (51). Recently, more efficient TANEL-based knockout methods have been suggested (52,53), and further miRNA knockout experiments will be performed in the context of embryo development and adult cell differentiation, enhancing our understanding of miRNA-mediated regulation.

In contrast to LOFs, miRNA-side GOFs can be performed by introducing miRNA duplexes, short hairpin RNAs (shRNAs), and miRNA expression vectors (Fig. 2F-G), which lead to downregulation of miRNA targets. Although the majority of the miRNA-side GOFs have been performed in cell lines, the lentiviral vector system has been frequently applied to ESCs to overexpress ESC-associated miRNAs. Xu et al. transduced a lentiviral vector containing mir-145 precursor to hESCs to examine the effect of miR-145 on endogenous OCT4, KLF4, and SOX2 in hESCs, and found reduction of OCT4 and KLF4, but not SOX2 expression (54). The overexpression of miR-145 was sufficient to inhibit hESC self-renewal (54). Lahmy et al. transduced a lentiviral vector containing human mir-375 precursor to hESCs and observed accelerated islet differentiation (55). More recently, Deng et al. introduced an miR-125b-2 lentiviral expression vector to mESCs, and reported that miR-125b-2 inhibited the differentiation of mESCs into endoderm and ectoderm but did not affect their self-renewal or proliferation (56).

Because miRNA-side perturbation affects multiple biological processes through hundreds of conserved targets, it can be difficult to pinpoint target genes involved in the observed phenotypes. In contrast, target-side perturbation could less ambiguously verify a target gene and the functional role of the miRNA. Target site mutation (Fig. 2H) and alternative polyadenylation mutation (Fig. 2I) enable assessment of the one-to-one relationship between a miRNA and its target site by impairing their interaction. For instance, Xu et al. validated the direct regulation of OCT4, SOX2, and KLF4 using mutant 3’UTR with a 6 bp deletion of the miR-145 target site (54). Lee et al. by introducing a point mutation at the target site demonstrated that miR-26a directly downregulates HDAC6 during myogenic differentiation of embryonic stem cells (57). 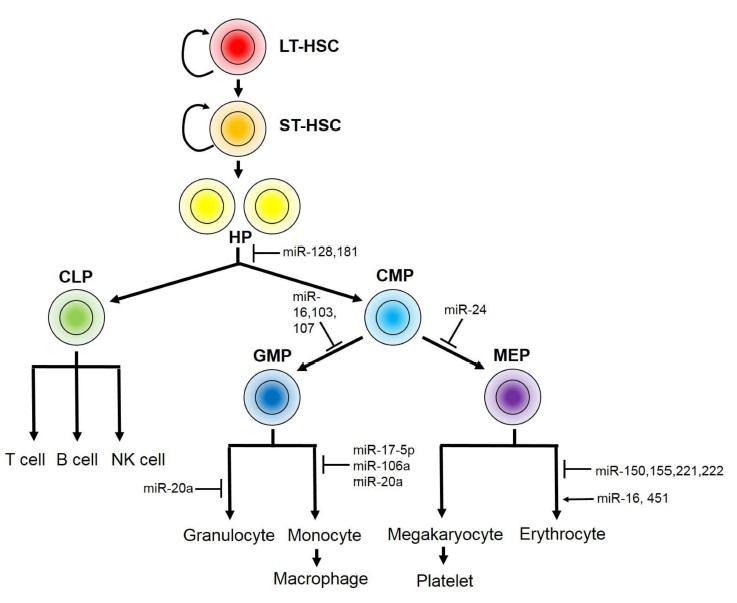 miRNAs in the nervous system: A crucial lineage specification of the neural stem cell (NSC) takes place during the differentiation of neurons or astrocytes, one of the glial cell types. This process is regulated by distinct groups of miRNAs that mediate lineage-specific differentiation. Expression of miR-124 and miR-128 leads to the induction of neuronal cell fate (75). On the other hand, miR-124 targets the 3’UTR of SCP1, a small carboxy-terminal domain phosphatase 1 that binds to a conserved response element and suppresses the expression of neural genes, leading to astrocyte differentiation (76).

Accompanied by recent progress in RNA biology and stem cell biology, critical roles of miRNAs in the maintenance and differentiation of stem cells have been revealed. Advances in deep-sequencing techniques and large-scale screening will lead to discovery of diverse functions of further miRNAs in various stem cell types. Recent studies have reported other types of non-coding RNAs, including groups of small non-coding RNAs and large non-coding RNAs, the functions of which have yet to be identified. It will be of interest to study the functions of such novel non-coding RNAs in stem cell control in addition to miRNAs, given the number of non-coding genes in the human genome. Elucidation of the biological mechanisms underlying miRNA-mediated control of stem cells will provide insight into how gene networks simultaneously orchestrate the expression of multiple target genes, which gives rise to precise consequences during development. Furthermore, these studies will be a basis for translational research and clinical application, as miRNAs possess tremendous potential for clinical applications and as drug targets.