Recently, with the increase in national income, the interest of consumers in the safety and hygiene of animal food has greatly increased. In particular, meat-processing companies are trying to produce high-quality and ecofriendly premium meat products to compete with imported meat products (Korea Meat Industries Association, 2009). Koreans traditionally consume soups using extracts that have been obtained from the shank bone, tail, rib, knee cartilage, and mixed bone of cattle and have been boiled for a long time. Until now, the soup “Gomtang” was mainly produced using extracts from legs and other portions of Hanwoo cattle (Kim et al., 2014). The soup “Galbitang” is prepared from extracts from ribs and other portions of Hanwoo cattle in Korea.

Bone mainly consists of the following: 1/3, organic substances; 2/3, inorganic substances such as collagenous fiber and bone minerals (Malmberg and Nygren, 2008). In addition, collagen is a key building block of cells of bones, cartilage, ligaments, and the brain (Poundarik et al., 2015). Kim et al. (2007) reported that collagen protein and chondroitin sulfate were abundant in the Hanwoo shank bone. Gel obtained from bone extraction is also formed by the bonding of salt-soluble proteins from meat, such as myosin, actin, and actomyosin, and gelatinization of collagen in bone (Chen et al., 2014; Comfort and Howell, 2003).

Recently, the nutritional importance of microelements in the diet has gained attention; among these, calcium is one of the most nutritive components whose deficiency is often seen in human diets. Lack of calcium intake is closely related to growth and bone maintenance, osteoporosis, fractures, and bone diseases (Lupsa and Insogna, 2015). In particular, as aging progresses, calcium intake becomes more important for the prevention and cure of skeletal disorders (Chapuy et al., 1992). Cattle bone-derived calcium is an effective calcium source because of higher calcium bioavailability than other calcium sources. High phosphorus content in the bone is reported to inhibit calcium absorption in human body (Spencer et al., 1978).

Therefore, this study was conducted to compare the effects of mixed bone and brisket meat on quality characteristics and nutritional components of shank bone and rib extracts from Hanwoo.

pH was measured in triplicate using a digital pH meter (8603, Metrohm, Swiss). Approximately 10 g of the sample was cut into small pieces to which 90 mL of distilled water was added, and a homogenate was prepared using a homogenizer (T25B, IKA Sdn, Bhd., Malaysia); then, the pH was measured using a pH meter. The pH meter was calibrated daily with standard buffers of pH 4.0 (9863 pH buffer solution; Mettler Toledo Swiss) and 7.0 (9865 pH buffer solution; Mettler Toledo Swiss) at 25℃.

The sample was filtered using Whatman No. 1 filter paper, and the salinity and sugar content of filtered samples were determined using a digital salimeter (PAL-03S, ATAGO, Japan) and saccharometer (PAL-3, ATAGO, Japan) respectively.

A double beam spectrophotometer (Optizen 3220UV, Mecasys, Korea) was used for measuring turbidity. The bone extract sample was filtered using Whatman No. 1 filter paper. The turbidity of the filtered sample was measured at 590 nm; the blank was distilled water. Turbidity has been represented as % transmittance.

Sensory evaluation was performed by a panel of 15 semi trained tasters. The panel consisted of 10 researchers and 5 technicians at the Chungbuk National University (male: female: 1:1; age range, 25-45 years). All samples were given random numbers and were served randomly. The samples had warmed up at microwave for 1 min, and served in paper cups per 50 mL. The panel evaluated each treatment within each replication in triplicate, and the evaluation was performed with the samples at room temperature. The panelists rinsed their mouths with water and some neutral crackers between the samples. The color, aroma, flavor, viscosity, and overall acceptability (1 = extremely slight or poor, 5 = extremely intense or superb) of the extracts were evaluated using a five-point scale.

Five milliliters of the sample was added into a 50 mL test tube and homogenized with 15 mL of de-ionized distilled water using a homogenizer (T25; IKA Werke GmbH & Co., KG, Germany) for 10 s at 3,000 rpm. Then, 1 mL sample homogenate was transferred to a disposable test tube (3×100 mm), and butylated hydroxyanisole (50 μL, 10%) and thiobarbituric acid/tricholoroacetic acid (TBA/TCA) (2 mL) were added. The mixture was vortexed and then incubated in a boiling water bath for 15 min for color development. The sample was cooled in cold water for 10 min, vortexed again, and centrifuged for 15 min at 2,000 g. The absorbance of the resulting supernatant solution was determined at 531 nm against a blank containing 1 mL distilled water and 2 mL TBA/TCA solution. The TBARS concentration has been expressed as milligrams of malondialdehyde per kilogram of sample.

VBN, a measure of protein degradation, was measured as described previously, with some modifications (Pearson, 1976). Briefly, 10 mL of the sample and a few drops of phenolphthalein indicator (0.5 wt% solution in 50 wt% ethanol) were placed in a distillation flask; then 3.5 mL of 20% sodium hydroxide solution was added. The apparatus was then sealed immediately, and the end of the steam distillate was collected in a flask containing 20 mL 4% boric acid and a few drops of Tashiro indicator (methyl red-methylene blue = 2:1). The steam distillation procedure was continued until 250 mL of distillate had been collected. Next, the basic solution obtained was titrated against 0.01 M hydrochloric acid to the end point, which was indicated by a green-to-gray color change. The VBN content was measured after a blank correction determined by steam distillation of 6% perchloric acid.

Total lipids of samples were extracted by using chloroform-methanol (2:1, v/v) according to the procedure of Folch et al. (1957). An aliquot of the total lipid extract was methylated as described by Morrison and Smith (1964). Fatty acid methyl esters were analyzed using a gas chromatograph (Varian 3800) fitted with a fused silica capillary column, Omegawax 205 (30 m×0.32 mm i·d., 0.25μm film thickness). The injection port was at 250℃ and the detector was maintained at 300℃. Results have been expressed as percentages based on the total peak area.

The entire experiment was replicated three times at different times in the same place, and a completely randomized design was used. The data of physico-chemical properties of extracts were analyzed by General Linear Model procedure of SAS program, The statistical model included raw bones, mixed bone, brisket meat and interactions of them, as well as the panelist in sensory evaluation, as fixed errors, with individual extract defined as the error term (experimental unit). Effects of the bones, mixed bone, brisket meat and their interactions with p<0.05, p<0.001 and p<0.0001 were judged as ‘significance’ and ‘tendency,’ respectively. All data analysis was performed using SAS for Windows, version 9.1.3 (SAS, 2003).

The effects of mixed bone and brisket meat on physicochemical properties of shank bone and rib extracts are presented in Table 1. The pH values of extracts significantly were influenced by the raw bones, mixed bone, brisket meat and their interactions (p<0.05). The highest values of salinity and sugar contents were observed in shank bone extract added with mixed bone and brisket meat (T3), all effects excluding raw bones and brisket meat interaction affected the values in salinity and sugar contents (p<0.05). Also, the turbidity values significantly were influenced by all raw materials. All bones contain minerals such as calcium, phosphorous, magnesium, and sodium. These minerals can be extracted by high-temperature or boiling water extraction. In these bone extracts, the minerals exist as calcium carbonate, calcium phosphate, and magnesium phosphate (Lorprayoon, 1986). According to Kim (2006), shank bone and rib bone extracts of cattle extracted for eight hours contained 0.39 and 0.45 mg/100 mL calcium, 0.05 and 0.08 mg/100 mL magnesium, 0.19 and 1.44 mg/100 mL phosphorous, respectively. Furthermore, calcium, magnesium, and phosphorous contents in shank bone extract increased significantly as the cooking time increased from 2 to 12 h (Seol and Jang, 1990). Therefore, it was determined that the pH of bone extracts increases because ionized minerals have the capacity to exchange hydrogen ions. The pH of bone extracts with brisket meat was significantly lower, due to the influence of lower pH meat (general pH range of Hanwoo meat, 5.4-5.6) (Cho et al., 2008), than that of the bone extract with rib bone meat attached. Kim et al. (2014) showed that sodium content (211.77, 254.40, 134.93 mg/kg) was the highest in shank bone extract, feet extract, and tail extract, respectively. These results were consistent with those of Park (1986). In addition, the contents of sodium and potassium in Hanwoo beef cuts such as rib, sirloin, chuck roll, tender loin, and fore shank were shown to be 51.49-68.21 mg/100 g and 144.57-338.81 mg/100 g, respectively (Kim et al., 2010). In addition, the contents of nucleotides and their related compounds such as AMP, IMP, inosine, and hypoxanthine were significantly higher in brisket soup than in shank bone soup (Cho and Jung, 1999). Therefore, the salinity and sugar contents were increased following the addition of mixed bone and meat. Kim (2006) reported that turbidity of shank bone extract was lower than that of rib bone extract, which was consistent with the observations of this study. However, turbidity did not show a clear tendency in the extracts with mixed bone and brisket. This could be because mixed bone contains unequal proportions of different parts. 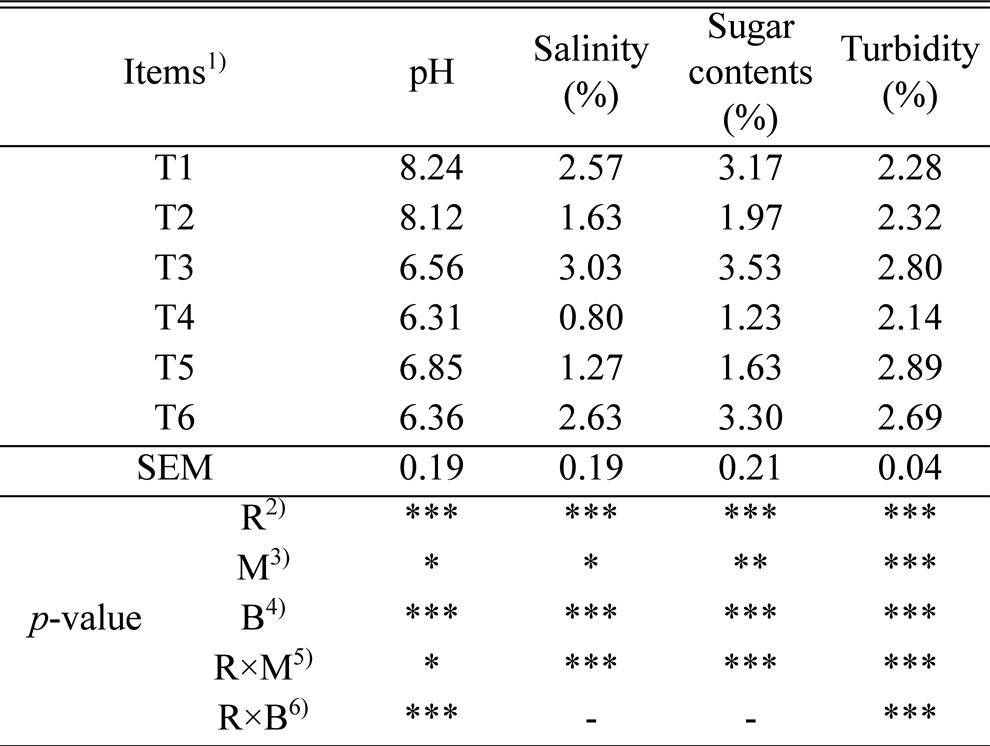 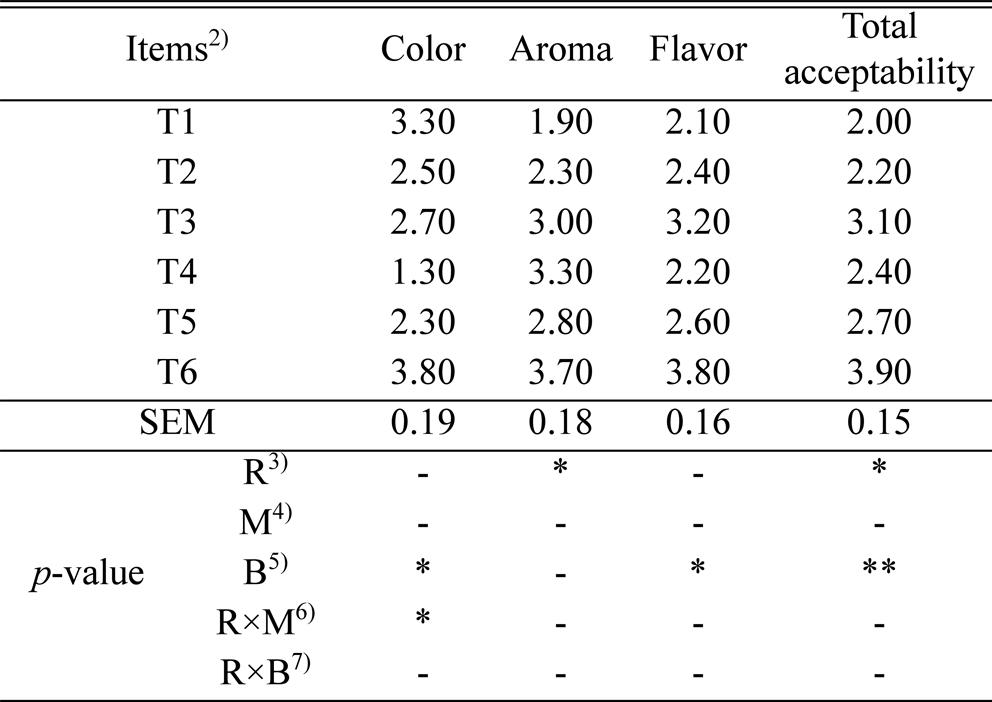 The effects of mixed bone and brisket meat on TBARS and VBN of bone extracts in Hanwoo were presented in Table 3. The TBARS value of extract from rib added with mixed bone and brisket meat was the highest among the treatment groups. In addition, shank bone groups tended to show lower TBARS values compared to those of rib groups. The VBN values were significantly increased by the addition of brisket meat (p<0.0001). The TBARS content represents fat oxidation in meat products. Excessive fat oxidation results in malodor and rancidity of the meat. Fat oxidation could be promoted by high fat content and the presence of high amounts of free fatty acids in the meat, sunlight, irradiation, thermal treatment, and transition metal ions such as iron, copper, zinc, and magnesium (Domínguez et al., 2014; Falowo et al., 2014; Lorenzo and Pateiro, 2013; Nam et al., 2003; Pelser et al., 2007). Kim (2006) demonstrated that metal ion of the rib extract was higher than that of the shank bone extract, which explains the higher TBARS content in rib extracts. Furthermore, the VBN content was found to be derived from meat rather than bone, because VBN values were higher in the extracts containing brisket meat and rib. Park (1986) reported that shank bone contained approximately 20% collagen. Only 20% of the total collagen content was extracted during 20 h of hot water extraction. 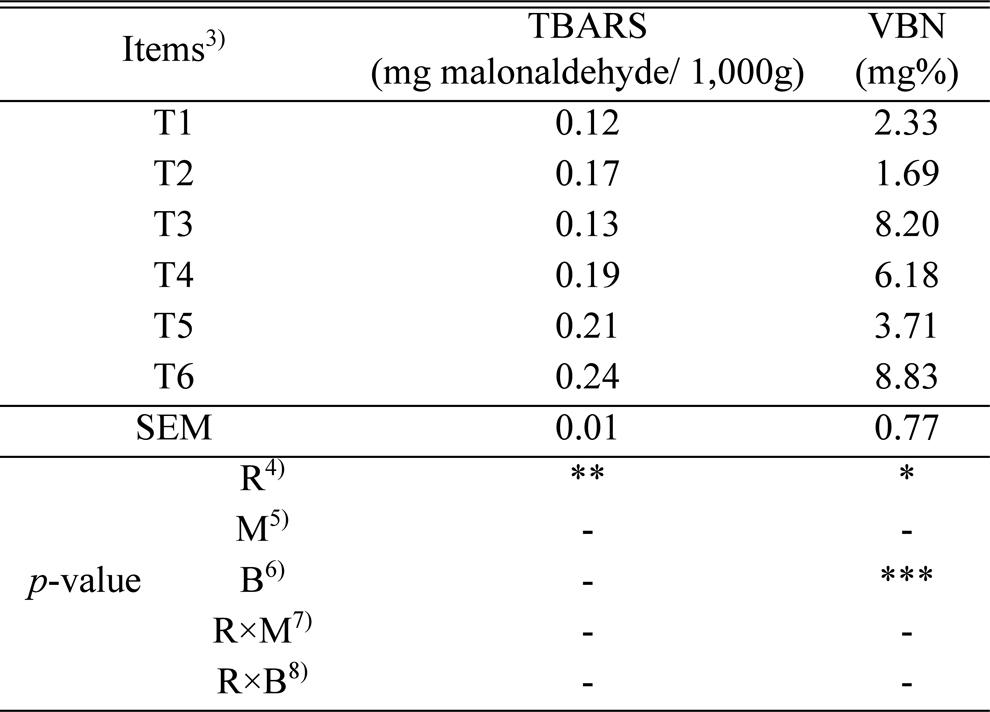 Based on these results, it was concluded that the quality and nutritional components of bone extracts were influenced by the addition of raw materials, and given that studies on this topic have not been conducted domestically or globally, our findings could provide basic data for further research on using animal bone extract in the food industry.