Internet Information Orientation: The Link to National Competitiveness on Internet

Recently, the web index of Korea peaked at the top 10 among the eighty six countries, and Korea became the only Asian country ranked at the top level. Korea also has been on the top in the field of Internet penetration rate, in terms of both high-speed broadband and wireless Internet. However, such achievements did not guarantee the national level for the effective use of information utilizing Internet. According to OECD, the national informatization index of Korea has not been free from the middle of the OECD countries. Despite of the heightened pressure in practically enhancing effective information use utilizing Internet, the previous research interests and efforts to develop the Internet-related framework or to identify Internet capabilities rarely existed. The study aims to propose the framework, named "Internet Information Orientation" that illustrates the relationship between Internet capabilities and national competitiveness on Internet. The research identified the specific Internet capabilities, reclassified the capabilities based on the research issues provided at the 6th international conference on Internet held in December 2014, and finally described the rigorous research endeavors on the issues. As a result, 16 papers presented and selected as the outstanding papers at the conference handle issues to be brought together, which include: Wireless Network, Internet of Things, Green Computing, Multimedia Processing, Big Data and Text Mining, Database in Cloud Environment, Business Intelligence, Software Engineering, IT Strategy & Policy, and Social Network Services.

Since 2000, Organization for Economic Cooperation and Development (OECD) has annually investigated national informatization index and Internet levels, and ranked the corresponding OECD member countries based on the estimation of the indicators and levels. Due to the persistent efforts of Korean governments and industries, Korea has been on the top in the field of Internet penetration rate in terms of both high-speed broadband Internet and wireless Internet. In contrast, Korean national information index has not been free from the middle of the OCED countries. [1]

Meanwhile, the World Wide Web Foundation designed and produced the Web Index. This composite statistic is the first multi-dimensional measure of the World Wide Web’s contribution to development and human rights globally. It targets 86 countries, incorporating indicators that assess four areas, in terms of universal access, freedom and openness, relevant content and empowerment, and covers indicators of economic, social, and political impacts of the Web. In 2013 and 2014, Korea peaked at the top 10 in web index among the countries, and became the only Asian country ranked at the top 10. [2]

However, such achievements do not guarantee the national level for the effective use of information utilizing Internet. Practically, Korean governments are facing the heightened pressure in enhancing Internet-related capabilities and in linking them to the indices established by OECD or the World Wide Web Foundation. Unfortunatly, the previous research efforts to develop the Internet-related framework or to identify any type of Internet capabilities rarely existed.

The study aims to propose the framework, named “Internet Information Orientation (IIO)” that links the national level of the Internet capabilities to the national competitiveness on Internet. Other primary purposes of the research include the identification of specific Internet capabilities, the reclassifications of the identified capabilities based on the research issues provided at the 6th international conference on Internet held in December 2014, and the description of the rigorous research endeavors in those issues.

Fig. 2.Spiral of Effective Information Use

In 2001, Marchand et al. presented Information Orientation (IO), a comprehensive measure of effective use of information to improve business performances, as illustrated in Fig. 3. They identified three broad concepts of managerial thinking and practices, including information technology, information management, and information behaviors and values. 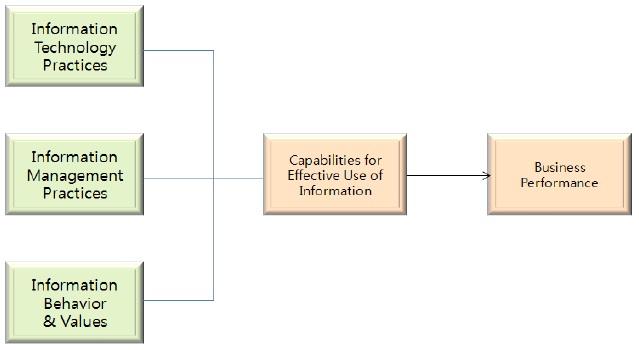 3. Reclassification of Internet Capabilities based on Each Issue

With Korea being a Internet leading country, the ICONI 2014 developed emerging Internet-related issues and invited prospective authors to submit research papers in the following tracks organized by the issues.

In addition, this research cited Wikipedia to describe the emerging issues regarding Internet, and linked each issue to the corresponding Internet capabilities, as expressed in Table 2.

The previously drawn issues bring revised and suggestively extended versions of sixteen papers selected as outstanding research and presented at the 6th international conference on Internet. The ICONI 2014 was hosted in Taipei, the capital of Taiwan on December 14-16, 2014. To grow into a top global Internet leading country, creative and feasible researches on both technical and managerial issues for Internet capabilities should be conducted and shared, such as the papers listed in Table 3. [4]

Table 3.Research Contributions based on Each Track 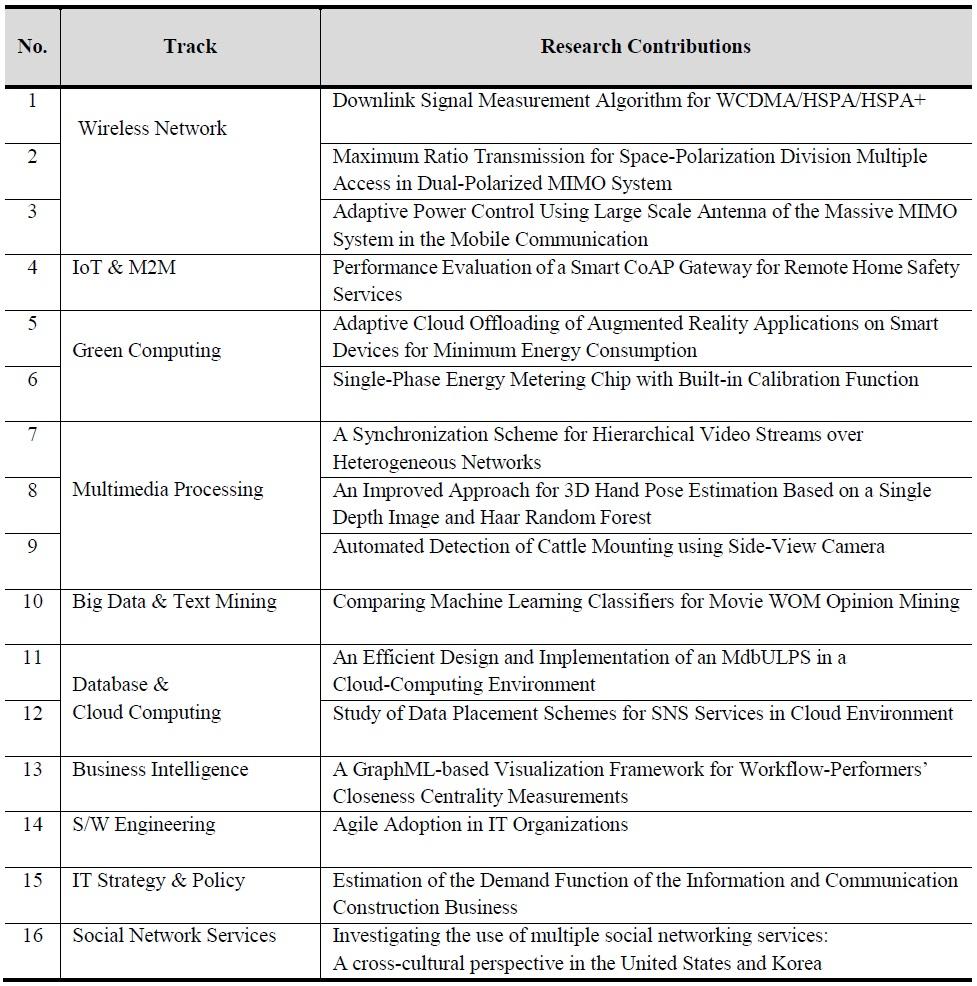 Hyun-Sik Kim et al. in their paper “Performance Evaluation of a Smart CoAP Gateway for Remote Home Safety Services” have presented a novel and practical solution to provide home safety services which can be realized by the proposed smart CoAP gateway and home safety sensor node. The home safety sensor node was designed to support multiple sensors according to their applications, and the smart CoAP gateway with a border router was designed to support multiple wireless connectivity and use the CoAP to communicate interactively and seamlessly between a low-power wireless personal area network and the Internet. [8]

The next article by Youn-Sung Lee et al. entitled “Single-Phase Energy Metering Chip with Built-in Calibration Function” has made efforts to present a single-phase energy metering chip with built-in calibration function to measure electric power quantities. The entire chip consists of an analog front end, a filter block, a computation engine, a calibration engine, and an external interface block. The key design issues are how to reduce the implementation costs of the computation engine from repeatedly used arithmetic operations and how to simplify calibration procedure and reduce calibration time. [10]

In the area of multimedia processing, the paper titled “A Synchronization Scheme for Hierarchical Video Streams over Heterogeneous Networks” by Yejin Sohn et al. has proposed a synchronization scheme for video streams transported over broadcasting networks and networks based on HTTP, which is the third hybrid delivery service model suggested by MMT. [11]

Wonggi Kim et al. in their paper “An Improved Approach for 3D Hand Pose Estimation Based on a Single Depth Image and Haar Random Forest” have presented an improved approach for tracking and recovering the 3D position and orientation of a human hand using the Kinect sensor. The basic idea of the proposed method is to solve an optimization problem that minimizes the discrepancy in 3D shape between an actual hand observed by Kinect and a hypothesized 3D hand model. [12]

The article by Yongwha Chung et al. entitled “Automated Detection of Cattle Mounting using Side-View Camera” has proposed a “non-attached” method to detect estrus with an audio surveillance system. They applied computer vision techniques to mounting detection for a large-scale farm to further improve the accuracy of estrus detection, and proposed a video surveillance system with a “side-view” camera to detect mounting behavior based on motion analysis techniques. [13]

In the track of database in cloud environment, the paper titled “An Efficient Design and Implementation of an MdbULPS in a Cloud-Computing Environment” by Myoungjin Kim et al. has proposed MongoDB-based unstructured log processing system (MdbULPS) in a cloud-computing environment that processes large amounts of log data. The study focuses on handling the log data generated in a bank, among various types of log data. [15]

The next article by Yen-Wen Chen et al. entitled “Study of Data Placement Schemes for SNS Services in Cloud Environment” has proposed a heuristic procedure for SNS data placement to achieve the above objective. The proposed scheme adopts the correlation property to group users information by using k-means clustering and distributes users or data sources among VMs. Two data placement schemes are proposed for both pre-configured VM and dynamic VM situations. [16]

Min-Joon Kim et al. in their paper “A GraphML-based Visualization Framework for Workflow-Performers’ Closeness Centrality Measurements” have proposed a visualization framework focusing on measuring the centralizations of workflow performers, which is one of the key practice indicators to identify the important or prominent performers within a workflow procedure, and can be analyzed by the typical social network analysis technique, centrality. [17]

In the track of software engineering, the paper titled “Agile Adoption in IT Organizations” by Imran Ghani et al. has identified and analyzed the barriers that impact on the performance of IT organizations that use such agile software development methods. The contribution of this analysis is to present guideline related to avoid or overcome the barriers towards adoption of agile. [18]

The study intended to establish the framework, named “Internet Information Orientation” that illustrates the relationship between effective information use utilizing Internet and the potential national competitiveness indices. The research identified various Internet capabilities, the reclassified the identified capabilities based on the research issues proposed at the 6th international conference on Internet, and finally described the rigorous research endeavors in those issues.

As a result, the authors developed the Internet Information Orientation that links information capabilities utilizing Internet to national competitiveness on Internet, such as national informatization index or web index. The framework illustrated three main types of Internet capabilities: Internet technology capability, information management capability via Internet, and information usage behaviors on Internet. Then fifteen specific capabilities were identified and arranged based on ten research issues. Finally, the study introduced 16 outstanding papers that may contribute to enhancing Korea national competitiveness on Internet. Hopefully, the concepts of Internet Information Orientation may provide both practitioners and policy-makers with practical guideline for Internet capabilities in establishing their business strategy and governmental policies regarding Internet.

To get more sophisticated, the proposed framework should be empirically verified and consistently upgraded in near future.