Experimental studies have been carried out to study the principle operation of the conductive type wire-mesh tomography sensor and analyse the wire-mesh tomography sensor for the liquid/gas two-phase flow interface and void fraction distribution in a process column. The measurement of the two-phase flows in the process column is based on the cross-sectional local instantaneous conductivity. The sensor consists of two planes of parallel electrode wires with 16 electrodes each and was placed orthogonally with each plane. The sensor electrode wires were made of tinned copper wire with an outer diameter of 0.91 mm which stretched over the sensor fixture. Therefore, this result in the mesh grid size with 5.53×5.53mm2. The wire-mesh sensor was tested in a horizontal liquid/gas two-phase flows process column with nominal diameter of 95.6 mm and the sampling frequency of 5882.3529 Hz. The tomogram results show that the wire-mesh tomography provides significant results to represent the void fraction distribution in the process column and estimation error was found in the liquid/gas interface level

Process tomography techniques are used to visualize the cross-section images of the mixtures of substances flowing in the process column. Process tomography produces cross-section images related to the phase fraction in the process column. Process tomography technique has widely used to investigate multiphase flow behaviour in oil and gas industries, chemical industries and also biotechnology industries [1]. An intrusive wire-mesh conductive tomography sensor is an alternative technique which was designed by H. M. Prasser in 1998 [2]. This sensor can use to gain void fraction distribution in multiphase flow process visualization. Multiphase flow describes the two or more physically distinct simultaneous flow mixtures in a process column. The mixtures can be the combination of one or more components of gaseous, liquid, or solid.

By using tomography techniques, several measurements like velocity or phase fraction boundaries can be determined and analysed. Thus, various tomography sensors used for the purpose of obtaining information such as phases flow patterns, phases flow velocity and phases boundaries investigation. Then, sensors’ output data is then used to generate desire dimensional images to monitoring or analysis the process system involved. Therefore, tomography techniques can help to provide problems’ solutions and improve process performance of system [3].

Wire-mesh sensor (WMS) is an alternative technique and is absolutely new to the tomography systems. A wire-mesh sensor is basically built with two layers perpendicularly located which were stretched over the process column as the transmitter layer and the receiver layer. The both layers of wires were installed orthogonal to each other without any physical contact. The first wire-mesh type tomography sensor introduced by Prasser et al. [2] at the Research Centre Rossendorf (FZR) was experimented to measure fluid conductivity.

On the other hand, a WMS is capable to measure the instantaneous interfacial phase fraction as well as the bubble’s size and velocity passing through the WMS [2, 7, 8]. WMS is used to produce high spatial and temporal resolution, which is depending on the grid size of the designed WMS. Wire mesh tomography is function to detect the crossing point’s electrical conductivity value and allow high speed cross-sectional phase distribution visualization. It is advantageous over many other tomographic devices in terms of low cost and non-hazardous compared to radiation tomographic methods.

Multiphase flow describes the two or more physically distinct simultaneous flow mixtures in a process column. The mixtures can be the combination of one or more components of gaseous, liquid, or solid. Basically, there are four types of multiphase mixtures can be identified [1], which are the liquid-gas flow, liquid-solid flow, gas-solid flow, and an immiscible liquid-liquid flow. Multiphase flow is not only important for engineering disciplines, but also for the industrial applications and others scientific fields like chemistry, physics, biology and meteorology.

The process tomography basic principle for multiphase flow investigation is to evaluate physical properties of phases flow a process column. Sensors were placed around the cross-section of a process column with an equal distance arrangement between each of it, then, the independent measurement data taken from sensors are used to reconstruct a two-dimensional image representing the interfacial distribution. Researchers as Ismail et al. [9] had concluded that an electrical capacitance tomography technique is very helpful in solving multi-phase flow meter and oil separator problems in the oil industry. While, Patel et al. [10] had proposed an electrical resistance tomography technique used to investigate the efficiency of continuous- flow mixing system for biopolymer inside a stirred tank reactor.

X-ray tomography is based on the radiation frequency signal attenuation, which is because of the presence and influence of a subject. Gas and water in the two-phase flow process column are consisting of distinct attenuation characteristics of the X-ray radiation. Therefore, cross-sectional void fraction images can be obtained by using a rotating source-detector system. Besides, gamma-ray tomography is a non-intrusive method and its sensing principle is same as X-ray tomography as measuring the attenuation of ionising radiation [11].

Magnetic resonant imaging (MRI) is a famous tomography technique used in medical diagnostics, which is related to the evaluation on nuclear magnetic resonance due to the hydrogen nuclei when Larmor frequency is transmitted in the investigation area.

Optical tomography uses the projection light like infrared, visible or ultraviolet radiation as information carrier. The light is emitted and received by a well-designed source-detector system, and process images are then can be reconstructed by measured data of light intensity changes. Recently, a new approach to optical tomography system had designed by Yan and Liao [12].

Ultrasound tomography is a technique, where detectors were received the presence of acoustic waves transmitted from a source, which had travelled through a investigate area, and so the acoustic impedance properties are measured. At this moment, ultrasonic tomography measurements can be measured by applying the reflection mode [19] and the transmission mode [20, 21]. Both modes can successfully be employed for investigating multiphase flow with the assist of the most suitable image reconstruction algorithm.

Wire-mesh sensor (WMS) is an alternative technique and is absolutely new to the tomography systems [2]. A wire-mesh sensor is basically built with two layers and each layer is perpendicular to each other and stretched over the process column as the transmitter layer and the receiver layer. The both layers of wires were installed orthogonal to each other without any physical contact. WMS is a mesh of wire or bar electrodes, which separated into two planes, one as the transmitter electrodes and another plane arranged 90° to the transmitter plane is the receiver electrodes. Each of the electrodes is arranged with a desire pitch distance and there is also a small distance between the transmitter and receiver plane where the output value is measured at the crossing points of the electrodes. Wire-mesh sensor is capable to produce high spatial and temporal resolution investigated images. Wire-mesh sensor has two types of operating principle, which are based on the measurement of conductivity, or permittivity value in the investigation area. A WMS can be applied to overcome the shortcomings of electrical process tomography, and it also has an advantage of low cost compare to radiation based tomography. 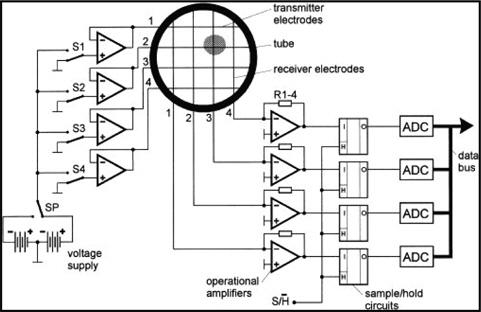 3.1 Design of the wire-mesh sensor

The sensor is designed to have two layers of tinned copper electrodes, which is perpendicular between each layer. There is a 2×16 wires with wire diameter, D = 0.91 mm, pitch distance between each of the electrodes, P = 5.53 mm, plane distance between transmitter plane and receiver plane, H= 3 mm. This WMS will stretch over a Perspex process column, which the column inner diameter, Din = 95.6 mm, outer diameter is 101.6 mm. A matrix of 16×16 (256 measured values) is measured after exciting the last transmitter electrode, only 216 of the crossing point is useful. Fig. 2 (a) and (b) shows the top view of initial designed wire-mesh sensor, where Tx1 to Tx16 is the electrodes of transmitter plane (horizontal red line) and the Rx1 to Rx16 is the receiver electrodes (vertical cyan line). 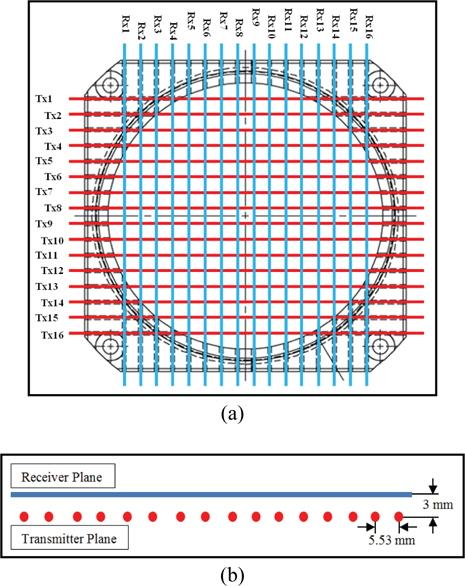 The sensor fixture shows in Fig. 3 does have a height of 76 mm and its width is just 110 mm that installed between two process columns. An O-ring is placed 10 mm above and below of the electrodes planes to prevent any leakage from the process column. 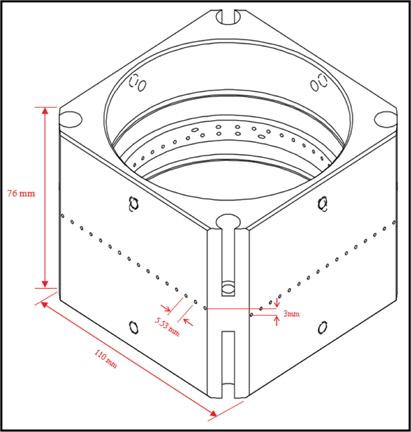 Each electrode plane allows 16 parallel wires to stretch over to both ends and all of the electrodes were crimped with screw connector as refer to Fig. 4, and the electrode was made of tinned copper wire with the diameter of 0.91 mm. The transmitter and receiver plane were distributed orthogonal to each other in the cross-section of the process column, which form a grid that has a pitch value of 5.53 mm. A distance equals to 3 mm was separating the transmitter and receiver plane. Therefore, the designed wire-mesh tomography sensor geometry provides a spatial resolution of 30.58 mm2 in a process column with a crosssectional area of 7178.04 mm2. 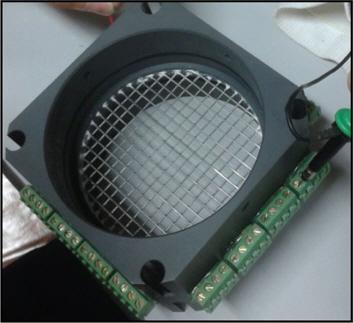 The wire-mesh sensor manufactured as shown in Fig. 4 is used to investigate the liquid/gas flow interface and the phases void fraction visualization. Fig. 5 illustrates a complete structure of wire-mesh tomography sensor system design. It consists of components such as a wire-mesh sensor, transmitter electronic circuit, ADC module, unit of micro-controller, data transfer unit, and a functional computer. This wire-mesh tomography sensor system design is based on the advantages of two samples of wire-mesh sensor signal acquisition and processing method in [22] and [23]. 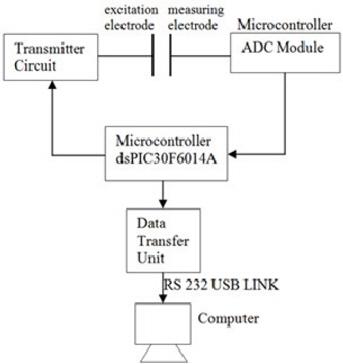 The liquid/gas interface visualization can be achieved by using the colour scale technique to distinguish the phases in the process column, then, plotting them in their node position formed by the orthogonal parallel wires. Each node represents the centre of grid size of 5.53×5.53 mm2. The phantom image was used to clearly describe the experimental situation and the liquid/gas interface level. The results are shown in Fig. 6 where AL denotes the liquid area (in percentage). 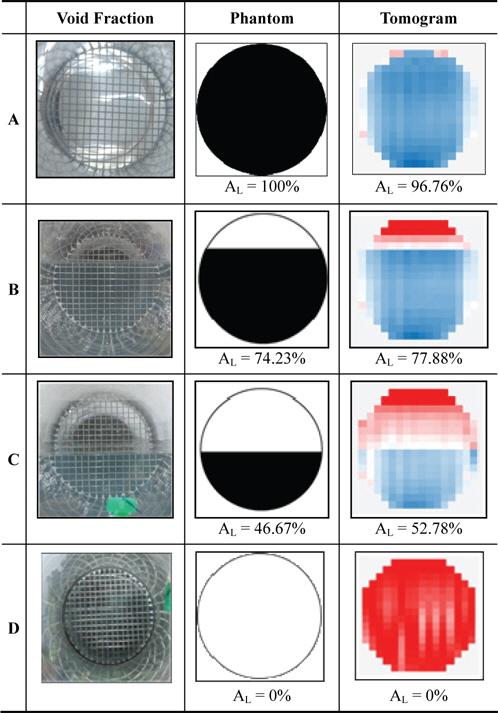 Fig. 6.Illustrations of the void fraction, phantom and the tomogram results.

The error of the tomogram result for phantom A may lead to misinterpreting the instantaneous flow situation as bubbly flow located at the top and east area of the result image, even though the actual measurement volume is completely filled with liquid in the process column. A careful observation of the result of the experimental data shows those crossing point values near to the sensor’s wall were relatively lower than the others crossing point values that not at the periphery of the wire-mesh sensor. Therefore, the liquid/gas distributions at the periphery of the wire-mesh sensor need to be determined by a calculation method that is different to the central crossing point measuring method.

The tomogram results B and C from the wire-mesh sensor shown that an overestimation occurred slightly in the determination of phases interface compared to its phantom. However the discrepencies are small and acceptable in this experiment.

The liquid/gas two-phase flow interface and its void fraction were experimentally investigated using conductive type wire-mesh tomography sensor. The circular type wire-mesh sensor was designed for a circular cross-sectional area test section of 7178.0366 mm2. Wire-mesh tomography technique provides reliable measurement of liquid/gas two-phase flow interface and its void fraction, as a maximum error for liquid/gas two-phase flow is recorded in the phantom C with 6.11%. Besides, full liquid flow phantom A has achieved a accuracy of 0.9676, while the full gas flow accuracy of phantom D is 1. In order to improve the estimation of the gas-liquid interface using the wire-mesh tomography technique, a suitable image reconstruction algorithm needs to be studied in the future.