In recent years, medical image diagnosis has growing significant momentous in the medicinal field. Brain and lung image of patient are distorted with salt and pepper noise is caused by moving the head and chest during scanning process of patients. Reconstruction of these images is a most significant field of diagnostic evaluation and is produced clearly through techniques such as linear or non-linear filtering. However, restored images are produced with smaller amount of noise reduction in the presence of huge magnitude of salt and pepper noises. To eliminate the high density of salt and pepper noises from the reproduction of images, a new efficient fuzzy based median filtering algorithm with a moderate elapsed time is proposed in this paper. Reproduction image results show enhanced performance for the proposed algorithm over other available noise reduction filtering techniques in terms of peak signal -to -noise ratio (PSNR), mean square error (MSE), root mean square error (RMSE), mean absolute error (MAE), image enhancement factor (IMF) and structural similarity (SSIM) value when tested on different medical images like magnetic resonance imaging (MRI) and computer tomography (CT) scan brain image and CT scan lung image. The introduced algorithm is switching filter that recognize the noise pixels and then corrects them by using median filter with fuzzy two-sided π- membership function for extracting the local information.

Recent methods like efficient detail-preserving approach (EDPA) and efficient edge-preserving algorithm (EEPA) based on alpha-trimmed mean statistical estimator have been proposed for the removal of salt-and-pepper noise without degrading image fine information’s [2]. Then, adaptive impulse detector with center-weighted median (ACWM) filter efficiently to remove salt-and-pepper noise. These techniques simply perform well when an image is degraded with 50% of noise densities and small window size. On the other hand, Progressive Switching Median Filter(PSMF), decision based algorithm (DBA), modified decision based algorithm (MDBA), are one of the fastest and efficient algorithms of capable of salt-andpepper noise removal at high noise densities as 80% [18]. A most important disadvantage of this algorithm is striping problem at high noise densities. To overcome this drawback, modified decision based unsymmetric trimmed median filter (MDBUTMF) is used to remove salt-and-pepper noise at very high densities as 80-90%. In response to this noise problem, the switching median filter [6], in which an impulse detector of employed to classify the center pixel of the filtering window is proposed. In the filtering algorithm, at high noise density, the processing pixel is replaced by the mean value of pixel elements within the window [5]. This causes blurring of fine image details or high computational time [10]. Examining all those problems exist in literature, we have proposed a new switching based algorithm, which aids to accurate medical image visualization. This algorithm gives better metric values than the existing median based algorithms [2-6].

The modified fuzzy switching median based filter is a non-causal two-stage filter, one stage for finding the pixels are noise-free or noise pixels and second stage for noise reduction as shown in figure Fig. 1. The first step to detect the two salt-and-pepper noise intensities. When a “corrupted pixel” is discovered, it is switched to the next filtering stage [11]. Otherwise, when a pixel is marked as “uncorrupted pixel” it will be left unchanged and the filtering process is spared to avoid replacing any fine details and textures in the noisy image [4].

In this stage after creation of binary noise mask value, “corrupted pixels” marked with B(m, n)=0 is replaced by an estimated adjustment pixel value and then increase the window size W2s+1(m, n) with (2s+1)x(2s+1) of chosen noise image. Then, the number of “uncorrupted pixels” in the filtering window W2s+1(m, n) is calculated using

where S value is choose the window size of image

After counting of uncorrupted pixel, the minimum number of “uncorrupted pixel” is less than one then expands the filtering window by one pixel [15]. This process is continued until the condition G2s+1(m, n) greater than or equal to one [18]. The uncorrupted pixels select the median pixel M(m, n), given by

The corrupted pixels select the median pixel M(m, n), given by

After finding the value of median pixel M(m, n), the local information in a 3 × 3 window is extracted by computing the absolute pixel difference α(m, n), given by 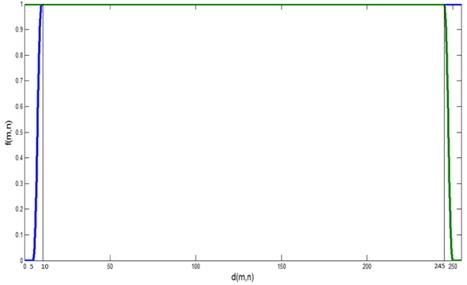 The two-sided π-membership function [19], given by 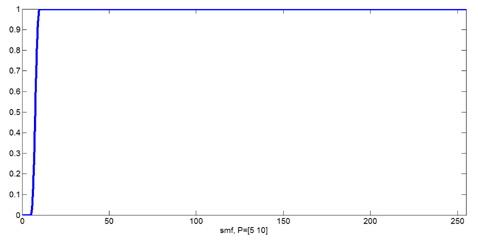 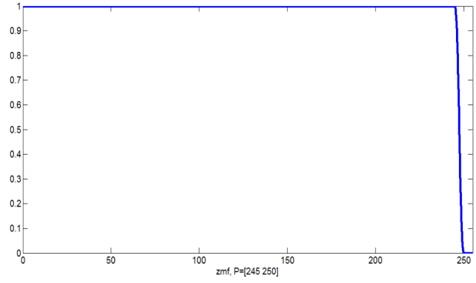 Where the local information d(m, n) is used as the fuzzy variable and the four thresholds T1, T2, T3 and T4 are set to 5,10,245 and 250 respectively for best performance [11]. The restored image Y(m, n) is acquired by linear combination of weighted processing pixel X(m,n) and median pixel M(m, n) of noisy image [15].

In this section, the performance of the proposed fuzzy based median filter was tested with medical images with noise levels are varied from 10% to 90% and compared with other existing salt-and–pepper noise removal filters. The restoration performances are quantitatively measured by several different kinds of metric value such as peak signal to noise ratio (PSNR), mean square error (MSE), RMSE, image enhancement factor (IMF), mean absolute error (MAE) and elapsed time [18].

The PSNR is most commonly used as a quality measurement for lossy compressed images. The PSNR is the ratio of the maximal power of original image and the noise power of distorted image. It is represented in the logarithmic domain because the powers of signals are usually in a wide dynamic range [6]. Its formula is given by

MSE is the most widely used image quality assessment based on error sensitivity [10]. It is computed by taking the average of squared intensity differences in every pixel of a reference image and a distorted image:

To obtain more correct assessments, the structural simailarity (SSIM) metric which represents perceptual image quality based on the structural information [13]. SSIM is an objective image quality metric and is superior to traditional quantitative measures such as MSE and PSNR [20].

A general form of SSIM is

Where α>0, β>0 and γ >0 are parameters used to adjust the relative importance of the three components and m, n are image patches.

Where l(m,n) is luminance comparison

and s(m,n) is structural comparison

Where C1, C2, C3 are constants and μm, μn,σm, σn, σmn are local sample means and standard deviations of m and n.

The MSE, RMSE, MAE, PSNR, IEF, elapsed time in seconds and SSIM value are calculated for the proposed algorithm by varying the noise density from 10% to 90% and comparisons of performance values of various existing median based filters for lung CT scan image are tabulated in Tables 1-7. 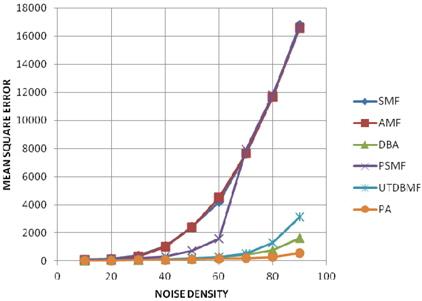 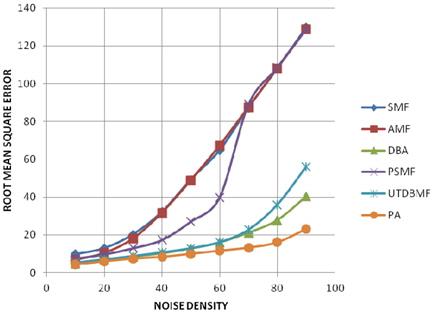 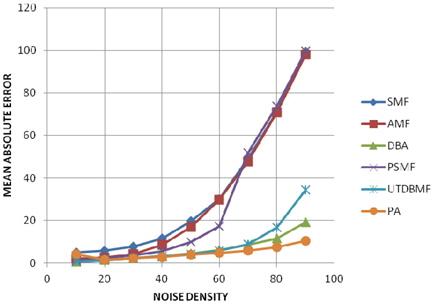 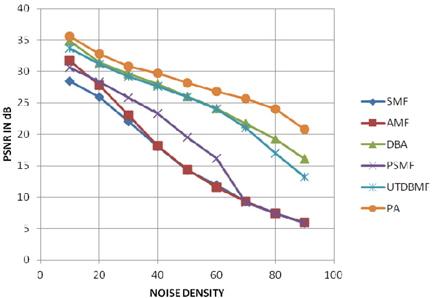 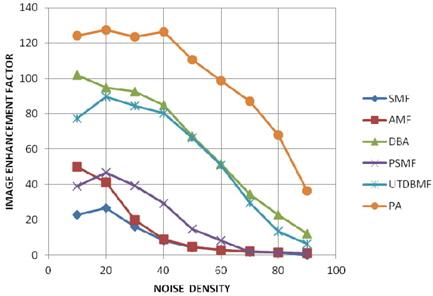 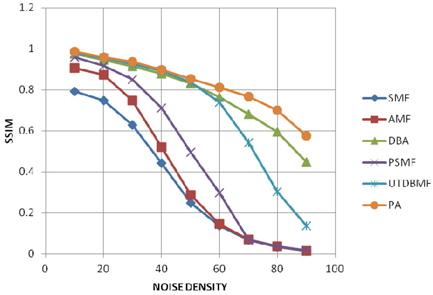 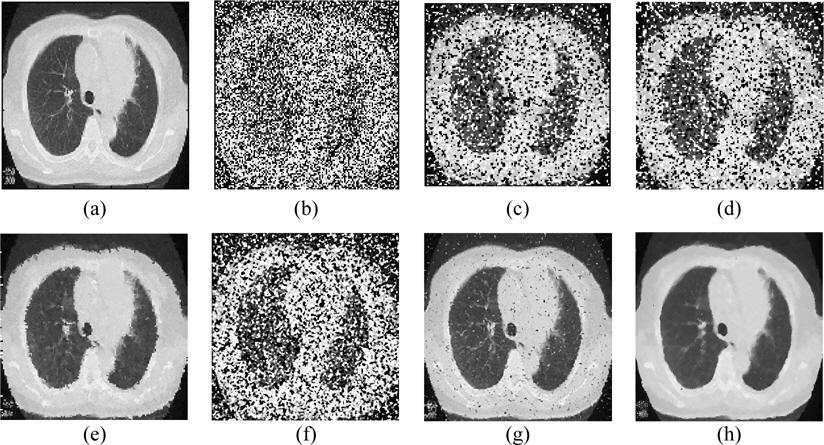 The PSNR value of proposed filter is high compared to existing methods as shown in Fig. 10. 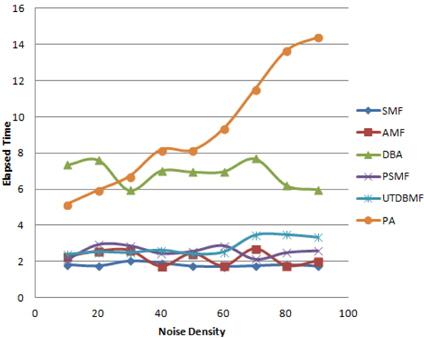 In this paper, a proposed fuzzy based median filtered algorithm has been implemented for enhancing the different medical images in terms of removal of salt-and-pepper noise from highly corrupted noisy image. The extracted local information for optimal performance is achieved by two-sided π-MF compare with other fuzzy membership function. Results show that the proposed algorithm improves the metric values in comparison with other existing algorithms in terms of higher PSNR, IEF and SSIM for noise densities from 10% to 90%. In addition, the moderately elapsed time and easy implementation for image denoising methods.