This paper presents the effective and reliable speed control of PMDC motors under variable loads and reference speeds. As is known DC motors are more preferred in industrial practices. This is that, the PMDC motors don’t require brush and commutator care and to increase in torque per motor depending on developments in power electronics. In this study, proportional-integral controller (PI) and fuzzy logic controller (FL) have been designed for speed control of PMDC motor. In the design of these controllers, characteristics such as minimum overrun time, response time to the load, settling time and ideal rise time have been taken into consideration for better stability performance. In this design, the best system response was searched by examining the effect of different defuzzification methods onto the fuzzy logic system response. In conclusion, it has been seen that FL controller has a better performance for variable speed-load control of PMDC motor compared to PI controller.

DC motors which are one of the machines that transform electric energy into mechanic energy and driver control systems are used in many fields of industry. Especially, the PMDC motors without brushless find more usage areas day by day in applications like automotive, space technologies, computer, medical electronics, military, robotics, electrical vehicles and products because of their such superiorities as high moment/current and moment/inactivity rate, strong structure, high performance, permanent control features and reliability [1-4].

PI controllers have the most common usage area due to the fact that they have simple structures and easily managed control algorithm. Control parameters are arranged usually manually or with the Ziegler-Nichols frequency method. Although successful results were obtained from both methods, a satisfactory system response is obtained with a long time and try. In the PI control of the PMDC motors is encountered with two major problems. The first of them; change of motor parameters depending on the operating conditions with time and secondly; this is because there is noise in the system cycle. Giving the best system response to reference speed is expected from speed controllers of PMDC motors under variable loads in accordance with such criteria as less overshoot (Mp)<10%, no steady state error (ess) < 1%, minimum settling time (ts ) < 2s and minimum rising time (tr)<1s [8].

However, the conventional PI controller doesn’t give the expected response in variable loads and reference speeds, and can’t meet the criteria required above. For this reason, an intelligent controller must be used to obtain the best system response to applied reference speeds under variable loads. Intelligent Control theory (Zadeh, 1965) have been proposed to overcome the uncertainty of traditional methods in the analysis and control of complex and nonlinear systems. This intelligent control theory is called Fuzzy Logic Control. One of the most significant advantages of fuzzy logic control is to control the nonlinear complex systems successfully using control engineering information or expert experiences without having any mathematical model [9, 10]. The fuzzy logic control, considering the experiences of the operator on system, performs the control process with linguistic expressions, and by using the mechanisms of rule base, fuzzification and defuzzification. In order to determine the fuzzy rules, the system output response is obtained by analyses in different points [11, 12].

In this study, the mathematical model of PMDC motor was simulated in Matlab/Simulink program. PI and FL control methods used for the speed control of PMDC motor in nonlinear speeds and under variable load were compared for better stability performance. Besides, the best system response was searched by examining the effect of different defuzzification methods onto the fuzzy logic system response.

PMDC motor has many desired qualities in a motor. Some of them are safety, stability, low cost, easy control and the ability to run in low voltage. In addition, the absence of brushes and collectors has substantially eliminated the disadvantage of permanent care. Because of these, DC motors are preferred in many applications [1, 3-4]. The mathematical expression of PMDC motor equivalent circuit showed in Fig. 1 was drawn from the Eqs. (1-5).

The differential equation sets above for armature current “ia” and angular velocity “wm” which are the variables of control system can be expressed as in Eq. (6) in the form of state-space.

In the control of industrial systems, conventional PI controllers are the most common and the most useful ones. In this controller, the proportion (P) and integral (I) operations were combined. The purpose of the control methods is to provide the system with optimal operating performance. For this purpose, proportional gain (P) is an indispensable part of control systems. For; the first and foremost aim of many systems is to provide gain. On using (P) control, the system gain can be easily decreased and increased as if it was set by a button. Thus, it provides to reply of system quickly by making improvements in damping ratio. However, the increase of gain decreases the sensitivity to the parameter changes on the system and leads to an increase in steady state error. In this case, there is a need for an additional structure to eliminate the steady state error. Here integral (I) effect comes into action. When (I) controller is used in a controller structure, the steady state error is reduced or eliminated. However, (I) controller can lead to a negative effect on damping. Also (I) controller increases the degree of the system one degree. Therefore, PI structure is preferred rather than only (I) controller. For, the stability in the structure of proportion effect and the integral effect’s advantages of decreasing steady state error were combined in PI control [5, 6]. In the PI control implementation prepared in this study, the closed cycle Ziegler-Nichols frequency response method was used in the setting of controllers’ parameters. The first things to do in these methods are [7, 8]:

1. Making the integral time constant Ti=∞ infinite, the effect of integral parameter of controller was eliminated. 2. The proportion coefficient Kp value is raised up to Ku critical value that system response oscillates in the form of sinus. 3. Putting the critical Ku gain and the Pu values which are the oscillation period composed by this gain into their place in Table 1 in the equations written for PI control, the proportion coefficient and integral time constant (Ti) values are obtained.

PMDC motor’s robust speed control with PI controller is designed at Matlab/Simulink program such that Fig. 7. In the linear and nonlinear reference speeds and steady and variable loads, performance comparisons between the fuzzy logic and conventional PI controls were shown separately in graphics in Figs. 9-11-12. 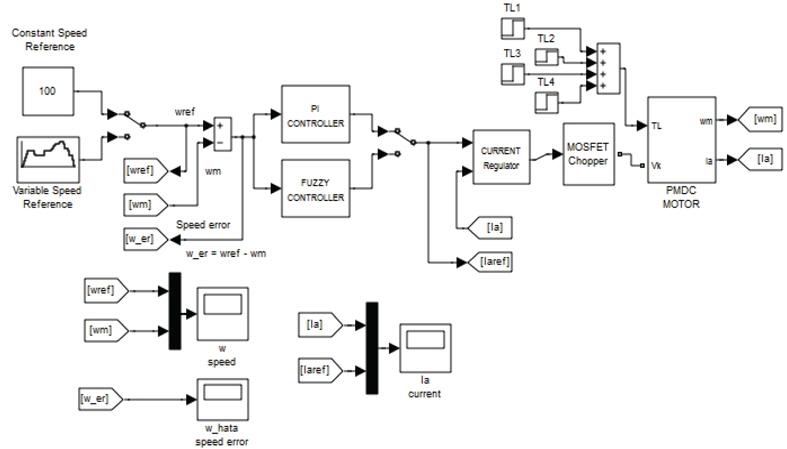 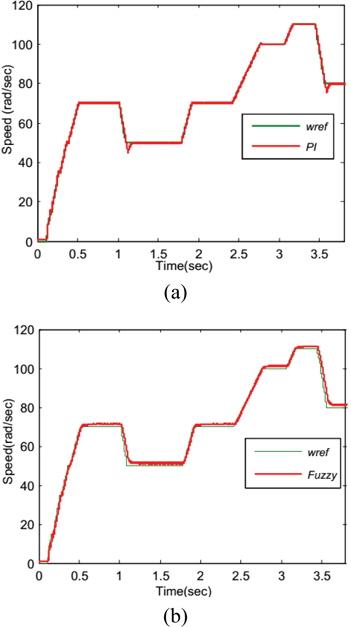 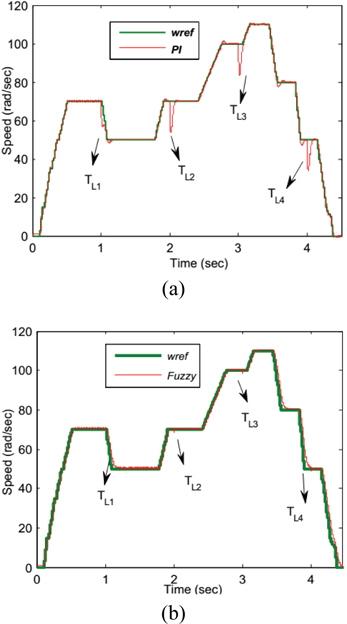 4. The Control of PMDC Motor with FL

In recent years, the fuzzy logic controllers have been used quite often in industrial applications. The fuzzy logic approach gives the machines the ability to process the special data of people and to run making use of their experiences and predictions. While providing this ability, instead of numerical expressions, symbolic expressions are used. The fuzzy systems can be used for different purposes such as for modelling, data analysis, estimation and control [9-13]. FL is simply composed of three main parts. These are fuzzification, rule base and defuzzification processes respectively. In Fig. 2, fuzzy system block scheme is shown. In Fig. 3, Mamdani fuzzy interface developed for the fuzzy logic control of the system was showed. 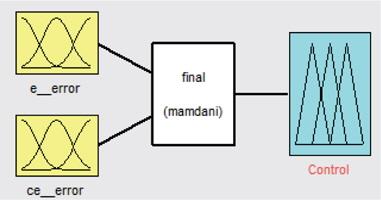 In this study, fuzzy logic controller (FL) have been designed for speed control of PMDC motor using Matlab/Simulink and Fuzzy toolbox. In this controller, as a process variable of motor driver, rotor speed (w), and as a control variable, motor current (ia) were chosen. The system input variables were defined as speed error (e) between reference speed and motor speed, and the change in the speed error (ce). Using 7 linguistic labels for the error (e(k)) and error change which are the input signs in the rule base, 9 linguistic labels for output control operation, and 49 rules in total were written. These variable sets were defined as Negative Big (nb), Negative Medium (nm), Negative Small (ns), Zero (z), Positive Small (ps), Positive Medium (pm) and Positive Big (pb) for inputs, and Negative very Big (nvb) and Positive very Big (pvb) for output in addition to these.

The fuzzy rule base is obtained through the carefully analysis of system behavior. The obtained rules must be written in a way to keep speed error, overshoot, settling time and rising time criteria at minimum values. In this study, rules have been created by analyzing of dynamic signal response given reference speed by PMDC motor that is shown in Fig. 4. 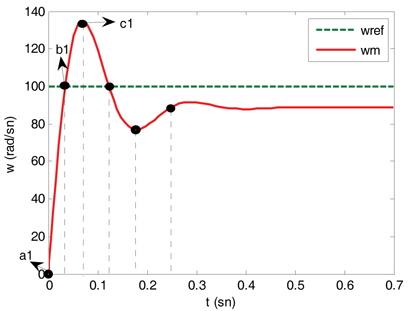 Table 2.If – Then rule base of fuzzy logic controller 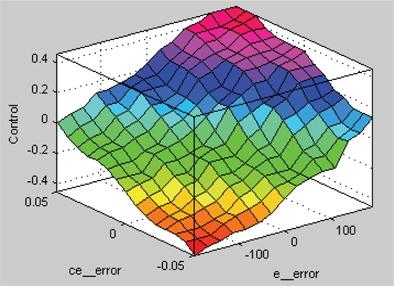 In this study, the processes applied in the stage of designing fuzzy logic controller for the robust speed control of PMDC motor are briefly these [23-25]:

In this section, for robust speed control under different conditions, the results of PMDC motor’s simulation realized through using the suggested fuzzy logic and PI control applications were presented. In Table 3, parameters of PMDC motor modelled in Matlab/Simulink program were given. 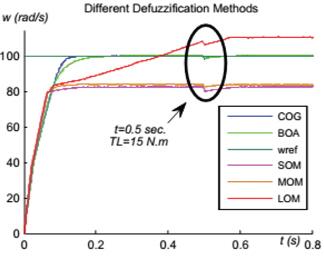 Secondly, performances of fuzzy logic and PI control methods were compared under no-load, load and suddenly changing load for a constant reference speed. In Fig. 9, responses of controllers were analyzed for (a) no-load, (b) load and (c) suddenly changing load for a constant reference speed (wref=100m/s). In PI control at Fig. 9(b), the cause of the oscillation is the integral gain value used if P proportional value is greater. So the integral value used without the proper damping has led to continuous oscillation in the system. According to the results obtained, fuzzy logic controller with COG defuzzification method has given better results in each case.

Thirdly, responses of FL and PI controllers were evaluated according to nonlinear reference speeds to applied PMDC motor under fixed and variable loads. In the evaluation of vehicles performances, Extra Urban Driving Cycle (EUDC) data of New European Driving Cycle (NEDC) were used as a reference speed. Driving cycle that is the important index to assess the emission levels of car provides the basic data for vehicle design. An often used driving cycle is the New European Driving Cycle (NEDC). The NEDC is supposed to represent the typical use of a car in Europe. This driving cycle contains both city driving with several start-and-stops and motorway driving. It is a good representation of a realistic driving environment. The NEDC consists of four repeated ECE-15 urban driving cycles (UDC) and an Extra- Urban driving cycle (EUDC). The maximum speed of the EUDC cycle is 120 km/h. Speed versus time curve for EUDC is as shown in Fig. 10. Table 4 shows a summary of the parameters for both the ECE and EUDC cycles [26-28]. 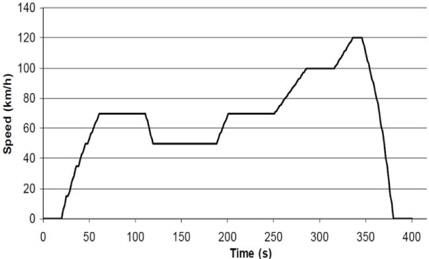 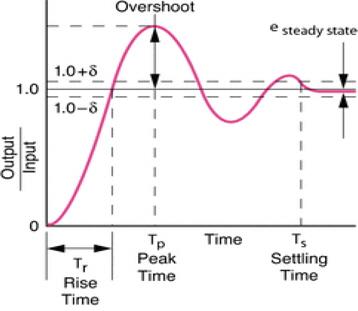 Rise Time is the amount of time the system takes to go from 10% to 90% of the steady-state, or final value.

Steady-State Error is the final difference between the process variable and set point.