Power line communication (PLC) is one of the major communication technologies in smart grid since it combines good communication capability with easy and simple deployment. As a power network can be modeled as a graph, we propose a vertex coloring based slot reuse scheduling in the time division multiple access (TDMA) period for PLCs. Our objective is to minimize the number of assigned time slots, while satisfying the quality of service (QoS) requirement of each station. Since the scheduling problem is NP-hard, we propose an efficient heuristic scheduling, which consists of repeated vertex coloring and slot reuse improvement algorithms. The simulation results confirm that the proposed algorithm significantly reduces the total number of time slots.

Because of the ubiquitous characteristics of power-line communication (PLC) for power grids, PLC takes on an important role for the next generation power grid, i.e., smart grid, which requires two way communications. According to the operational bandwidth, PLC systems can be classified into narrowband and broadband ones. Narrowband PLC uses sub 500 kHz and its maximum achievable throughput is up to several hundred kbps. On the other hand, broadband PLC runs at 1.8 MHz-250 MHz and the state-of-the-art broadband PLC standard can have up to Gbps throughput performance with shorter transmission ranges [1]. A recent smart grid project in Spain uses both narrowband PLC and broadband PLC. They are used for the connections between the substations and between the substations and smart meters, respectively [2, 3].

PLC has both a time division multiple access (TDMA) period to guarantee quality of service (QoS) and carrier sense multiple access with collision avoidance (CSMA/CA) period for impromptu data or control packet transmissions [4]. The TDMA period with proper time slot allocation between PLC stations has the advantage of exclusive channel access without having interference from other PLC stations. Therefore, scheduling, i.e., which station uses which time slot, is very important in the TDMA period.

Many researches on PLC scheduling in the TDMA period have recently been conducted. A simple heuristic time slot allocation scheme based on an interference matrix was proposed in [5]. This heuristic scheme is not scalable, i.e. it can only be used for two neighboring PLC networks. In [6, 7], a fair time slot assignment scheme was proposed for PLC in a multi-cell distribution network. However, this work does not consider slot reuse1 . Lee et al. proposed another time slot assignment scheme for routing in PLC access networks [8]. They formulated an optimization problem and proposed a heuristic algorithm. In [9], TDMA scheduling was proposed for tree based PLC networks. However, PLC in distribution networks forms diverse kinds of topologies including tree and mesh topologies.

The remainder of this paper is organized as follows. In Section 2, we describe our system model for a PLC network. O proposed slot reuse TDMA scheduling protocol is described in Section 3. After evaluating the proposed protocol in Section 4, we conclude our paper in Section 5.

We consider a homogeneous PLC network in which all of the PLC stations use the same PLC protocol, such as IEEE 19012 [13]. A beacon interval, which is synchronized with the AC line cycle, consists of a beacon period, a QoS guaranteed TDMA period, and a CSMA/CA period, which is for impromptu and best effort data or control packet transmissions. Fig. 1 shows an example of the beacon period. One beacon period of IEEE 1901 lies on two AC line cycles and its length is 33.33 msec for US and Korea and 40 msec for Europe.

Fig. 1.Example of IEEE 1901 beacon period. The beacon periods are synchronized with the AC line cycle for robust transmission. A beacon period consists of three regions: the beacon, CSMA/CA, and TDMA regions.

We consider a PLC network that consists of N stations within the same distribution network, as shown in Fig. 2. In this example, there are five PLC stations. That is, four out of the nine houses and the substation have PLC based smart meters. It is assumed that the PLC signal reaches up to the second neighbor houses because of the signal attenuation. 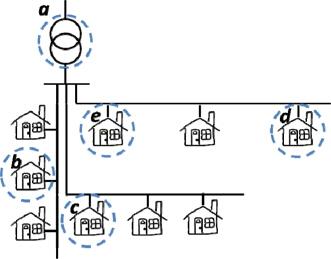 Fig. 2.Example of a PLC topology. There are three branches originating from one substation and three houses per branch. Among them, the substation and four houses have PLC based smart meters.

The actual PLC topology shown in Fig. 2 can be changed into a logical network graph as shown in Fig. 3. Let G = (V, E) denote the network graph, where V is the set of nodes, which are the PLC stations, and E is the set of links, which constitute the connecting links formed by those stations that are within transmission range of each other. We assume that all of the links in the network graph are bi-directional, i.e., channel reciprocity. In this example, a can communicate with b, c, and e; and d can only communicate with e. Note that we use the term station for a PLC module installed in a house and node for the network graph.

Fig. 3.Network graph for the example topology. The nodes and links stand for the stations and communication channels, respectively.

Fig. 4.Conflict graph for the example topology. The vertices and edges mean the communication links and conflict relationships, respectively.

Note that the conflict graph makes it easier to understand the interference relationship between the stations, while the network graph clarifies the actual topology.

To express the scheduling problem, we define several variables. We first define a time slot allocation indicator sv,t for a vertex v∈ VC and time slot t ∈ 𝕋 as

This interference constraint allows only one vertex to be activated among its neighbor vertices.

Lastly, to represent the QoS requirement of each station, we define a utility function which denotes the degree of satisfaction for v when v is scheduled as . One simple utility function counts the number of assigned time slots for the station. It can be expressed as4

In this section, we build a slot reuse TDMA scheduling which minimizes the number of allocated time slots, while satisfying the QoS requirements of all of the stations.

In IEEE 1901, the length of the TDMA and CSMA / CA periods is adjustable according to the traffic requirement. For instance, when many stations want to use QoS guaranteed services, such as for distribution system monitoring, it requires a longer TDMA period at a cost of a shortened CSMA / CA period. Therefore, efficient resource allocation in the TDMA period expands the length of the CSMA/CA period.

We can formally define the scheduling problem as

The first constraint of (P) represents the scheduling variable sv,t can only be a binary integer, and the second and third constraints are the interference constraint and QoS constraint, respectively. Problem (P) is a linear integer programming, which is NP-hard. Therefore, we propose a heuristic scheduling to obtain a suboptimal solution.

We first consider a special case, where each station has a unit QoS requirement. That is, the third constraint is changed into

Problem (P) with the new constraint is exactly the same as a vertex coloring problem if the time slots are regarded as colors. The vertex coloring problem is a color assignment problem to each vertex with the minimum number of colors, while no two adjacent vertices can have the same color. This problem of finding the minimum number of colors is also NP-hard [10].

Algorithm 1 shows the RLF vertex coloring algorithm. The algorithm selects a vertex x with the largest degree. Then, it assigns a color to the vertex and removes it from the set of uncolored vertices W. The color is also painted to a vertex y that is not a neighbor of x, and y is also removed from W. This procedure is repeated until there is no vertex to paint with the color. Then, the algorithm assigns a new color to the vertices through the same algorithm. This continues until all of the vertices have been assigned colors.

Table 2.Scheduling result of repeated vertex coloring algorithm for the same topology with U1=2, U2=1, U3=3, and U4=4.

The proposed repeated vertex coloring algorithm with SRI is shown in Algorithm 3. The SRI algorithm follows the RLF vertex coloring algorithm (lines 11-23). For each color c, the algorithm initializes all of the vertices as unmarked. Then, it marks those vertices that use c and their neighbor vertices. Among the unmarked vertices, the SRI algorithm additionally assigns the given color c to the vertex that has the maximum Uv . SRI again marks the vertex and its neighbor vertices until all of the vertices are marked.

In this section, we compare the performance of the proposed slot reuse TDMA scheduling to those of no reuse scheduling and tree-based scheduling [9] in terms of scheduling the finish time.

We consider three PLC topologies. Topology-1 is the one shown in Fig. 2. In Topology-2, there are two cells, each of which has five PLC stations. Within a cell, all of the stations can communicate with each other, but only one station in cell 1 and two stations in cell 2 can communicate with the other cell. Similarly to Topology-1, in Topology-3, there are five power line branches originating from a substation and four houses in each branch. PLC based smart meters are installed at all houses and a PLC module is also installed at the substation. This is a typical advanced metering infrastructure (AMI) in a distribution network [15]. We assume that the PLC signals can reach their two hop neighbors in Topology-3.

Note that in our evaluations, we do not consider packet transmission errors. This is because time slots are assigned to each station without having severe interference and because it is assumed that a proper modulation and coding scheme is applied.

Fig. 5 shows the number of allocated time slots required to fulfill the QoS requirements of all of the stations. With no reuse scheduling, only one station can send its data in each time slot. In the case of Topology-3, to fulfill the QoSrequirement of each station, about 112 time slots are needed with no reuse scheduling. Since one time slot takes 419.48 usec, 46.98 msec is needed for the TDMA period, which is longer than one beacon period, i.e., 33.33 msec for US and Korea. Consequentially, no reuse scheduling cannot satisfy the QoS requirement of each station in Topology-3. However, the repeated vertex coloring algorithm with or without SRI only takes about 26 time slots, which is about 10.9 msec, i.e., it affords a 78% improvement. Therefore, with the proposed scheduling, not only are the QoS requirements of all of the stations satisfied in the TDMA period, but also the CSMA/CA period has about 22.43 msec to send the impromptu data or control packets. 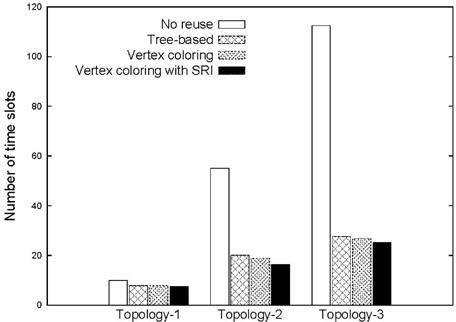 Fig. 1.Total number of time slots in the TDMA period to satisfy the QoS requirement of all stations.

The proposed SRI algorithm further reduces the number of time slots. For Topology-1, Topology-2, and Topology-3, the repeated vertex coloring algorithm with SRI provides improvements of 3.01%, 13.11%, and 5.69%, respectively, compared to those without SRI.

We propose a vertex coloring based slot reuse TDMA scheduling for PLC. We formulate the scheduling problem as one of minimizing the number of allocated time slots while satisfying the QoS requirement of each station. This problem is the same as the vertex coloring problem in graph theory, which is NP-hard. Therefore, to solve the problem, a greedy coloring algorithm is used and the algorithm is repeatedly executed to satisfy the QoS requirement of each station. In addition, we also proposed a slot reuse improvement algorithm to further utilize the power line channel. The simulation results showed that the proposed slot reuse TDMA scheduling significantly reduces the total number of allocated time slots.