The paper presents a monitoring system for the cooling of distribution transformers. The suggested system is controlled by a microcontroller scheme. The system is designed to control the oil temperature. It gives a solution to improve the cooling system by adding a number of fans especially for indoor transformers that are placed in badly-ventilated rooms. Also, the paper includes an alarm system with the possibility of tripping the transformer if it is necessary. The monitoring system consists of acquisition temperature sensor, and on-site unit. The hardware and software of the on-site unit are demonstrated with sufficient illustrations. Small prototype is constructed in the laboratory. Some laboratory experiments are carried out for examining the designed circuit by using Proteus Virtual System Modeling as well as for testing the prototype monitoring system. Concerning this research point, a study is carried out to evaluate the economic feasibility. The results are recorded and associated with many recommendations that may be valuable to electrical distribution (utility) companies.

For many years, there has been a good collaboration between the Electric Power and Machines Dept., Faculty of Engineering, Zagazig University, Egypt and the Electrical Distribution Company, El-Sharkia branch that is considered as the authorized utility company of Zagazig city. This collaboration may be demonstrated in scientific consultants, practical studies, student training, et al. At the summer of 2012, the utility company complained from a series of accidents and dramatic events in distribution transformers 11000/400 volts. Five transformers suffered from severe internal damages in their winding and other four transformers suffered from frequent tripping in rush hours. The utility company requested from the Electric Power and Machines Dept. to find a simple and economical solution. During the onsite observations, it was found that most of these transformers were indoor transformers classified as Oil Natural Air Natural Type. In addition, they were placed in badly-ventilated rooms.

Actually, for any transformer, some power is dissipated in the form of heat. For example, suppose a 10MVA transformer at a distribution substation that operates at an efficiency of 99%, then 1% loss corresponds to a staggering of 100 kW [8]. In general, smaller transformers like those on distribution poles are passively cooled by simply radiating heat away to their surroundings, sometimes assisted by radiator fans that maximize the available surface area for heat removal. Transformers with efficiencies less than 96% produce an excessive amount of heat and usually have an unsatisfactory temperature rise.

This paper suggests adding a number of fans to improve the cooling system, especially for indoor transformers that are placed in badly-ventilated rooms. Microcontroller technology is recently one of the most important applications that serve for control [6, 13, 16]. So, the suggested system is controlled by using a microcontroller scheme. The hardware is designed to control the oil temperature. First, it is required to sense oil temperature by LM35, which is an integrated circuit sensor that can be used to measure temperature in °C with an electrical output that is proportional to the temperature. Then, the suitable action is taken according to the following four sequential stages: Fan (1) operates at 55℃, fan (2) operates at 65℃, sound or light alarm operates at 95℃, finally, trip signal is sent at 100 ℃. The designed hardware is tested by Proteus Virtual System Modeling (off-line testing program). Then, it is implemented online at a small prototype that is constructed in the laboratory.

The estimated cost of the proposed system will never exceed 600 Egyptian Pounds (≈100$). The details of the hardware and all results are reported with a feasibility study for application to the distribution transformers in service.

It is worth to mention that until now, the distribution utility under-study doesn’t have SCADA system to communicate with the dispatch center. So, it is suggested to utilize temperature sensors (indicators).

The suggested monitoring system is shown in Fig. 1. It consists of successive stages. The first stage concerns the measuring of oil temperature. The second stage deals with the recorded temperature with the help of on-site unit. Finally, the prober action is taken according to expert diagnosis system. All these stages will be demonstrated in the following subsections. 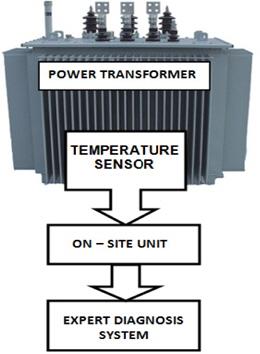 LM35 is a precision integrated-circuit temperature sensor whose output voltage is linearly proportional to the Celsius (Centigrade) temperature [1]. Basic pin connection of centigrade temperature acquisition sensor is shown in Fig. 2. It has the following features:

The hardware of on-site unit is shown in Fig. 3. It consists of some components as will be discussed below. 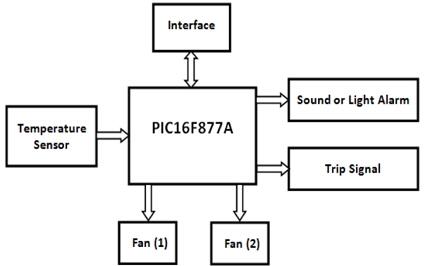 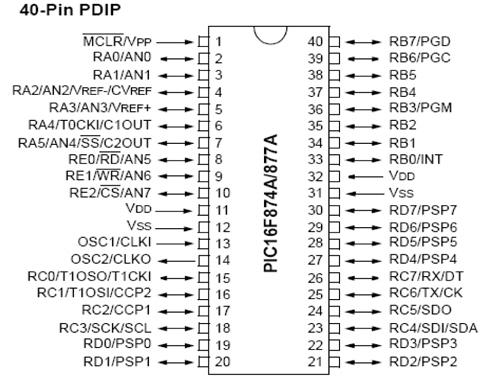 As demonstrated at Table 1, which describes the PIC16F877A device features, the microcontroller has 5 main Input/output ports (A, B, C, D &E). 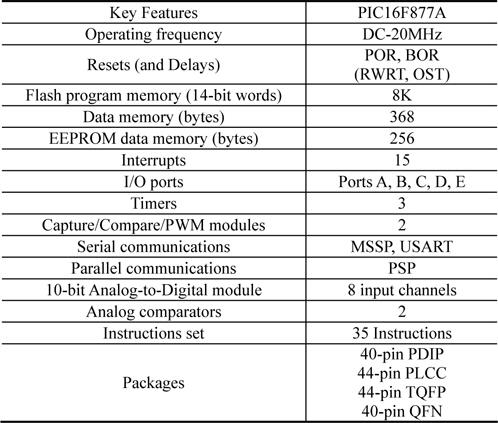 LCD is considered the interface tool of on-site unit. Fig. 5 shows the 16×4 character type with back light that has 16 outputs. 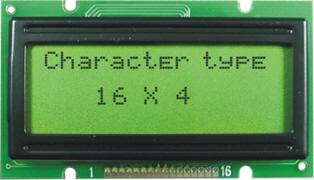 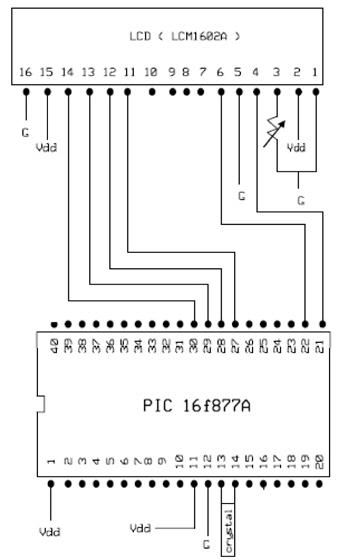 Fig. 6.LCD connection with the microcontroller

The output ports of the microcontroller send control signals to energize the circuits of two fans, sound producer (alarm), and the circuit of the transformer circuit-breaker trip.

Fig. 7 demonstrates the state diagram for on-site unit. At first, when the power is on, the initialization process is started. It includes initialization of registers, variables, and ports. Then, it is required to wait to get the oil measurement. The measured value must be stored until accessing the next process that is related to comparing the stored measured value with the pre-recommended values (expert diagnosis system). If the result of the comparison reflects a negative index, it is a must to get another measurement with repeating the same mentioned procedure. If the result of the comparison reflects a positive index, some actions must be taken according to the following four stages to deal with this problem: Fan (1) operates at 55℃, fan (2) operates at 65℃, sound or light alarm operates at 95℃, finally, trip signal is sent at 100 ℃. When the causes of the previous actions are removed, it is required to reset the unit and return back to the initialization process. 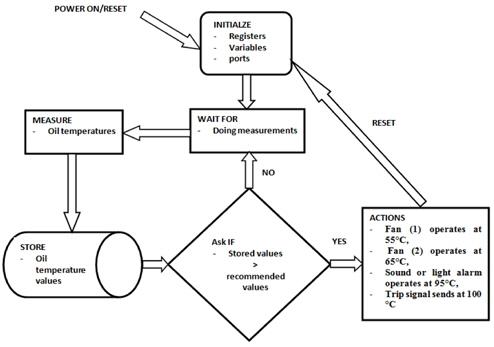 To execute the suggested process, Master Programmer was written and designed by using Micro© program.

Laboratory experiments are carried out to perform all the required investigations to complete the desired work correctly. Investigations include examining the designed circuit by using Proteus Virtual System Modelling (VSM) and also testing the prototype monitoring system [3, 11].

To insure that the designed circuit works properly, it is simulated by using Proteus Virtual System Modeling (VSM) [3]. Proteus combines mixed mode SPICE circuit simulation, animated components, and microprocessor models to facilitate co-simulation of complete microcontroller-based designs. For the first time ever, it is possible to develop and test such designs before a physical prototype is constructed. This is possible because one can interact with the design using on-screen indicators such as LED and LCD displays, and actuators such as switches and buttons. The simulation takes place in real-time (or near enough to it). 1GMHz Pentium III can simulate a basic 8051 system clocking at over 12MHz. Proteus VSM also provides extensive debugging facilities including breakpoints, single stepping, and variable display for both assembly code and high-level language source. The library of the program contains all required components to be built together. After the stage of completing building the circuit, the program is executed. It reflects the performance of the designed system. Fig. 8 shows the built system. 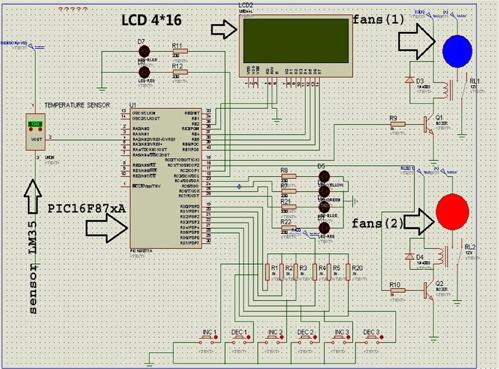 In the laboratory, a prototype is made to perform the online tests. A tank filled with oil is constructed. The temperature sensor is connected to the microcontroller as shown in Fig. 9. Then, the other components of the on-site unit are assembled as shown in Fig. 10. The oil tank is exposed to a source of heat to simulate a real case-study. During the test, all possible situations are considered. The performance of the suggested monitoring system proves very good appearance and successfully deals with the temperature problem as planned; according to the state diagram presented in Fig. 7. 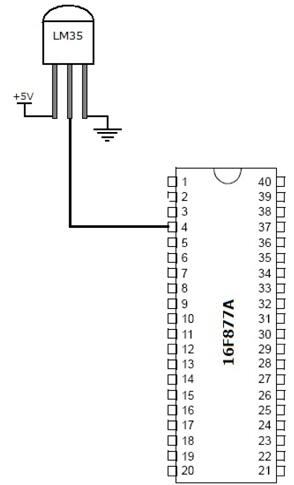 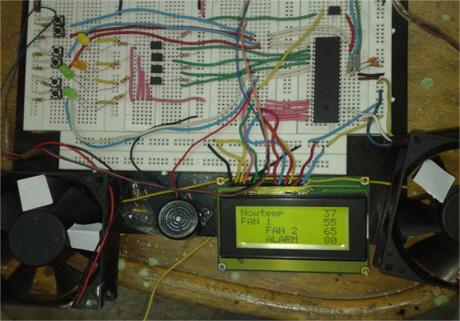 Fig. 10.The implementation of the suggested system

To make this work inclusive, it is required to carry out feasibility study to cover the economical issue. Zagazig city have 657 distributed transformers in service. Almost their rates range from 1000 kVA to 200 kVA. Table 2 contains some details about these transformers such as their prices and numbers.

In the future, the suggested monitoring system can be modified to be suitable to SCADA system. The general packet radio service (GPRS) communication technology can be applied so that remote signal transmission is accomplished by wireless network [9, 12, 15]. As mentioned before, until now the distribution utility of Zagazig city doesn’t have SCADA system to communicate with the dispatch center. So, it is suggested to utilize temperature sensors (indicators). If the utility decides to use SCADA system, the suggested monitoring system can easily be modified to deal with SCADA system. Possibly, the modifications may include the hardware of on-site unit to be suitable for online managements and communications with the dispatch center. The heart of this unit is LPC2214, which is based on 32-bit ARM7 processor [5]. It has lots of integrated peripherals which bring great convenience to system design. After preparing the voltage signal that is obtained from temperature sensor indicator by using Analog to Digital (A/D) card, the processor transfers it to remote expert diagnosis system by GPRS. GPRS mobile network is based on the data packet commutation through the usable mobile network where the data quantity is charged not the duration of the connection. Having this in mind, a necessity is to choose the appropriate communication protocols and standards that would utilize that kind of data transfer in the most efficient way. Data is then sent to the SCADA application servers via IEC 60870-5-104 communication protocol. One of the points is to lower the cost of data transfer; other is to ensure that data is up-to-date (real-time data). The real-time data acquisition is the key to efficient distribution network management.

From the above contributions discussed in the present paper, it can be concluded that:

- The suggested monitoring system finds simple and inexpensive solution for cool problem of indoor transformers that are placed in unsuitable rooms with bad ventilation. - Utilizing temperature sensors (indicators) are the best choice in the present case as the distribution utility of Zagazig city doesn’t have SCADA system till now. - Experiments that were carried out in laboratory either examining the designed circuit by using Proteus or testing the prototype monitoring system granted a good design and operation. - In case of using SCADA system, the suggested monitoring system is still valid with minor modifications.