In this paper, for the simulation analysis, a tri-axial HTS power cable model component was developed for a Real-Time Digital Simulator (RTDS). The considered properties of the model component include the resistance, reactance, and temperature variations of the HTS wires and Liquid Nitrogen (LN2). The cable resistance was obtained based on a characteristic equation of superconductor [4], and it was also changed by the operating current, critical current, and temperature of the cable. The reactance was determined based on its structure and properties, such as permittivity. The temperature variations were calculated considering the heat value and heat transfer. The model component was applied to a model power system, and a simulation was performed under a transient state using the RTDS. The simulation results showed the effect of the tri-axial HTS power cable on the power system, such as the fault current of the three phases, and the characteristic variations in the tri-axial HTS power cable, such as quench resistance and the surface temperature of the HTS wires under fault conditions. The simulation results are presented and discussed in detail. The approach presented in the RTDS-based model component of the cable will be used to implement the hardware-in-the-loop simulation with a protection device. Also, this work can be used for other types of HTS power cables to investigate their transient characteristics.

The tri-axial HTS power cable, which has a multi-layer structure, contains a core, three-conducting layers, and a shield layer in a cryostat. The conducting layers are twisted clockwise and counter-clockwise along the same axis. The conducting layers are insulated using cryogenic dielectric material, which comprises PolyPropylene Laminated Paper (PPLP). In order to obtain the superconducting state of the cable, it is refrigerated by LN2 , which is injected into the inner core pipe and refluxed through the outer cryostat [5]. Fig. 1 describes the structure of the tri-axial HTS power cable. This structure has the advantages of effectiveness and economic feasibility, but it also has disadvantages in terms of the insulation design and the imbalance of the three-phase currents. The detailed design processes are referred to in previous papers [6, 7]. Table 1 indicates the design parameters of the cable.

Table 2 shows the parameter-dimensions of the tri-axial HTS power cable [8]. In Table 2, the flow rate, the LN2 temperature of the input terminal, and the pressure of the input terminal are obtained by considering the relation formulas of the pressure loss, flow rate, and the LN2 temperature variations along with the length [9].

2.2 Modeling process of the model component in RTDS

RTDS is a fully digital electromagnetic transient power system simulator that operates in real time. Furthermore, the RTDS provides fast, reliable, accurate, and cost-effective results for power systems with complex high-voltage alternating currents as well as high-voltage direct current networks [10]. It can also be used to implement hardware in a loop simulation because it operates in real time.

The principal output results of the model component for a tri-axial HTS power cable are the resistance and reactance. The reactance is simply obtained using an equation based on the cable shape [6]. However, the resistance should be calculated considering the operating temperature, current and critical current because it changes according to both the cable shape and cable state. In addition, these results provide the temperature variations of the HTS wire and LN2, and the required cooling capacity after the transient state.

where ri is the radius of the inner layer, rj is the radius of the outer layer, μ0 is the permeability of the free space, lpi and lpj are the winding pitches of each layer, ai and aj are the 1(clockwise) and the −1(counter-clockwise) winding directional factors of the i-layer and the j-layer, respectively. D is the current return path, ε0 is the permittivity of the free space, and εr is the relative permittivity of the dielectric material which is PPLP. Its permittivity is 2.2 [6].

The resistance of the cable was calculated based on a characteristic equation of superconductor (4). The equation was obtained by experiment and it requires the critical current, operating current, and temperature [4]. Also this resistance was calculated considering the parallel connection with a base metal.

where R is the cable resistance, Ic is the critical current, K is the temperature, and I is the operating current.

The temperature was calculated using the heat value Eq. (5) and the heat transfer Eq. (6) [11]. The calculation of the LN2 temperature was divided into two parts, i.e., the injected LN2 and refluxed LN2 , and it was assumed to operate under the peak temperature value along with the length of each path and the radial axis transfer.

LN2 temperature of input terminal is 66 K as shown in Table 2, and LN2 peak temperature values along with the length of inner pipe and outer pipe are 75.3 K and 76.2 K, respectively. These were calculated based on a reference [9].

The authors assumed that all electrical power loss was converted into thermal energy because the cable didn’t have any mechanical loss. The generated heat value was calculated using the current and the resistance of the conductor as in (5).

The heat transfer rate of the cable layers was calculated using the heat conduction equation of a hollow cylinder as in (6) [12].

where L is the length of the cable, (T1 –T2) is the temperature difference between the cable layers, r1 is the radius of the inner layer, r2 is the radius of the outer layer and k is the thermal conductivity of the materials. The thermal conductivity of PPLP is 0.2 W/mK. The heat transfer rate of in-between phases (a, b, and c) and shield layers of the cable shown in Fig. 1 were calculated in every time step using the parameters given in Table 3.

Table 3.The parameters for the surface temperature calculations

Fig. 2 illustrates overall procedure of the calculation algorithm for the surface temperature of the cable layers in detail. As shown in Fig. 2, the heat value Qgen and the transfer value Qcondt are accumulated every time step (△H= Qgen + Qcondt) in order to evaluate the temperature variation value △T as in (7). 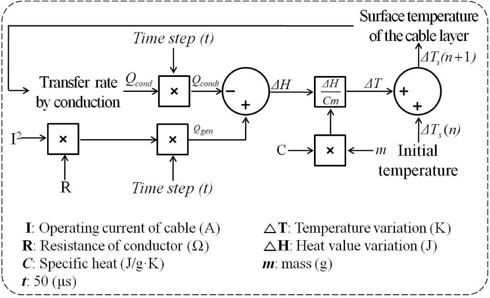 where m is the mass, C is the specific heat. Finally the surface temperature of the cable layer Ts will be integrated for the required time duration as in (8).

where n is the iteration number.

Shield layer resistance was calculated using the specific resistance Eq. (9) and it was also changed by the temperature.

where Ccu is the specific resistance, T is the temperature.

3. Application of the Model Component

The developed model component was applied to a 22.9 kV class power system model, which consisted of a 5 km distribution line made of ACSR (aluminum conductor steel reinforced) 160 and a 50 MVA load [3]. The impedance of the distribution line was 0.506 + j0.0025 Ω. The fault logic was in front of the load. This power system’s circuit diagram is shown in Fig. 3. The developed component took the operating current and gave the variable inductance, capacitance, and resistance in the power system circuit.

The simulation was performed under a transient state to analyze both the characteristics of the cable and the effect of the cable when it is applied to a real utility. The simulation was implemented on a three-phase fault. The rated current was 1.26 kArms, and the DC critical currents of each layer were 2.75 kA, 3.1 kA, and 3 kA at 77 K, respectively. The fault resistance was 1.59 Ω. The three-phase fault was initiated at 0.2 s and lasted for 0.066 s.

Fig. 4 and Fig. 5 indicate the simulation results of the three-phase fault according to the electrical and thermal characteristics of the cable. Fig. 4(a) and (b) show the current and cable resistance, indicating the root mean square value. Fig. 5(a) and (b) show the temperatures of the surface of each phase and the LN2 . In these results, variations in the surface temperature and resistance are important. 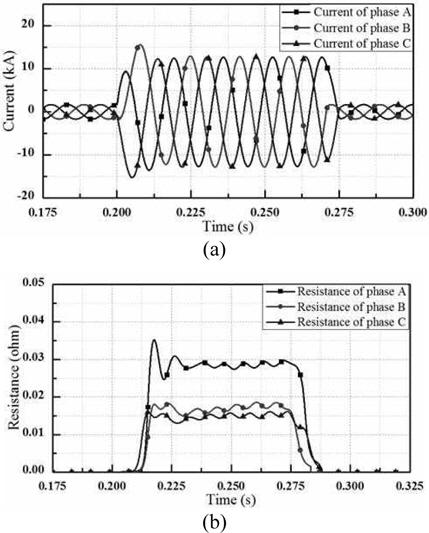 Fig. 4.Simulation results of the three-phase fault; (a) Fault current; (b) Resistance of the HTS power cable under transient condition 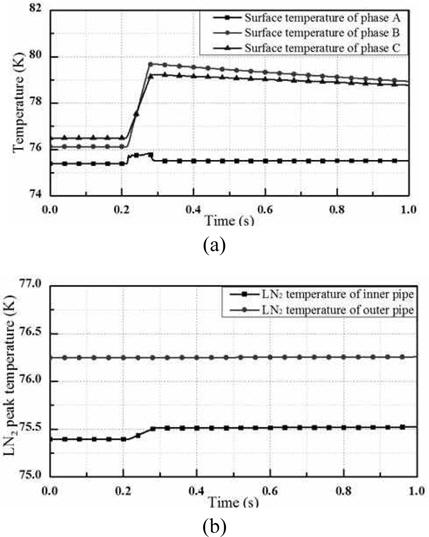 Fig. 5.Thermal characteristics of the tri-axial HTS power cable under the three-phase fault; (a) Surface temperatures of each phase; (b) Peak temperature of LN2

As soon as a fault was initiated, the fault current reached 9.2 kArms, and as a result, the resistance increases due to the quench and the peak temperature of the LN2 slight increased by 0.17 K. Although the DC critical current of phase B was higher than that of other phases as given in Table 1, the quench resistance of phase B was not small, as depicted Fig. 4 (b). This phenomenon was caused by the decrease of critical current of phase B. The decrease was caused by the degradation of the cooling system by the structural characteristic of the cable. If the surface temperatures increase higher than the boiling point of LN2, bubbles would have influence on the electrical insulation properties. This process is prevented by the cooling system control and the additional stabilizer that can bypass the fault current. 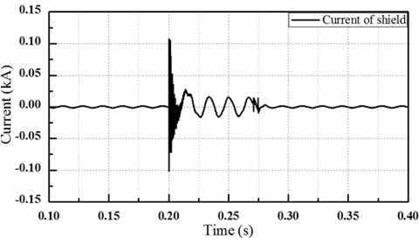