In the series hybrid active power filter (SHAPF) with magnetic flux compensation (MFC), the system current oscillate in the experimental results when adding the same phase harmonic current command in current control block. This condition endangers the security of the SHAPF. Taking the digit period average arithmetic as example, this paper explains the inter-harmonics current oscillation in the experiment. The conclusion is that the SHAPF is unstable to the inter-harmonics current in theory. Limited by the capacity of the inverter, the system current and the inverter output current do not increase to infinite. At last, some methods are proposed to solve this problem. From the practical viewpoint, the voltage feed-forward control is easy to achieve. It can suppress the current oscillation problems, and also improve the filtering effect. The feasibility of the methods is validated by both the emulation and experiment results.

As the wide application of power electronic equipments and nonlinear loads, the harmonic propagation in power distribution systems become a serious problem in the recent decades. In order to suppress harmonics, many methods have been proposed. Shunt passive power filters (PPF) have been widely used to keep harmonic contamination within acceptable limits. However, shunt PPF have many disadvantages in practical application [1-2]. They may cause resonance and the impedance of the power system strongly affects the filtering effects. To overcome these disadvantages, Active Power Filter (APF) has been proposed [3-8]. A novel principle of magnetic flux compensation (MFC) is proposed in reference [7], which has been applied in series hybrid APF [7-8], controllable reactor [9], and shunt hybrid APF [10]. In the series hybrid APF, the series transformer works as a controlled reactor. The series transformer exhibits primary leakage impedance to the fundamental current and magnetizing impedance to the harmonic current with the proper control of pulse-width modulation (PWM) inverters, then the harmonic currents are forced to flow into the passive filter.

Fig. 1 shows the T-type equivalent circuit of a single phase series transformer. Assume all parameters in Fig. 1 are the equivalent value after winding convert. r1σ, L1σ, and r2σ, L2σ represent the leakage impedance of the primary and secondary winding of the transformer; rm and Lm represent the magnetizing impedance; i1 is the current in the primary winding; i2, which is generated by a PWM inverter, is also the current in the secondary winding. It contains −α times of the fundamental current and β times of the harmonic current of I1. That is to say:

where: ω – the fundamental angular frequency

In Eq. (2), 0 < α ≤ 1, β > 0. If α is equal to 1, the series transformer will established nearly zero impedance to the fundamental, and (1 + β ) times magnetizing impedance to the harmonics. The primary winding of the series transformer is inserted in series connection between the power grid and passive filter. Then the harmonic current are forced to inflow into the passive filter.

The detection block of the reference signals as Fig. 2 shows [12]. sinωt and cosωt are the 50Hz sinusoidal signal and cosine signal. i is the current of the primary winding, it contains fundamental and harmonic component:

Fig. 2.Calculation of the reference signals

Multiply i1 by sinusoidal signal,

If the LPF block has ideal low pass characteristic, only DC signal can through it:

In a similar way, multiply i1 by cosine signal, the other DC signal component can obtained:

The fundamental component of i1 current is:

Finally, the reference current signals are: 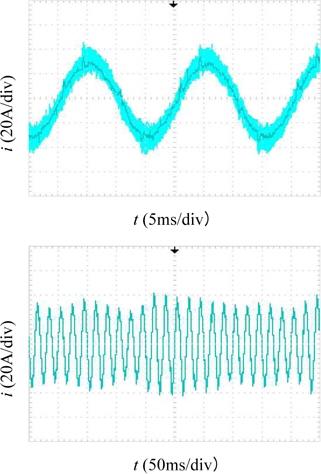 The accurately mathematical model of this “frequency coordinate transformation” is quite complex [13] and it is not necessary for the following theoretical analysis of this manuscript. For this reason, this manuscript does not considering the difference of the inter-harmonics frequency in different coordinate system. The amplitude-frequency and phase-frequency response of the LPF to DC signal in Fig. 4 represent the amplitude-frequency and phase-frequency response of the reference current signal calculation system to the 50Hz fundamental current signal. 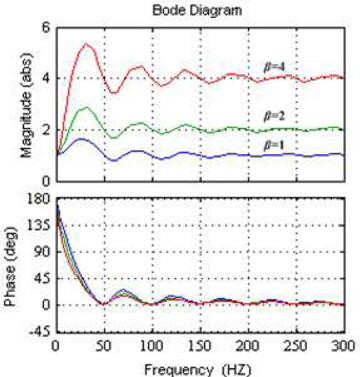 If α =1, the discrete transfer function of the Fig. 2 is: 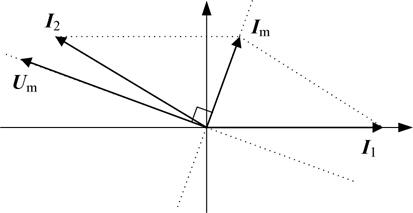 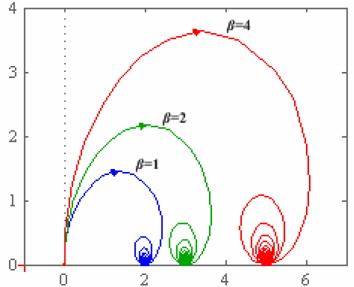 Assume Im=a+jb, a > 0, b > 0. Then observing from the primary winding of the series transformer, the equivalent impedance to the inter-harmonic is:

From Eq. (7), the equivalent resistance and inductance of the series transformer to inter-harmonics are:

The characteristic roots of the Eq. (9) are:

The general solution of Eq. (9) depends on the value of Δ, as Table 1 shows. Each form of the general solution contains exponential function. If | Rt | > | Rs|, R < 0. Thus when t → ∞, the solution of Eq. (9) → ∞. The APF system is unstable in theory. The inter-harmonics stability of the APF system depends on the “equivalent negative resistance” of the series transformer. According to Fig. 6 and Eq. (8), APF system is unstable if β is too large. 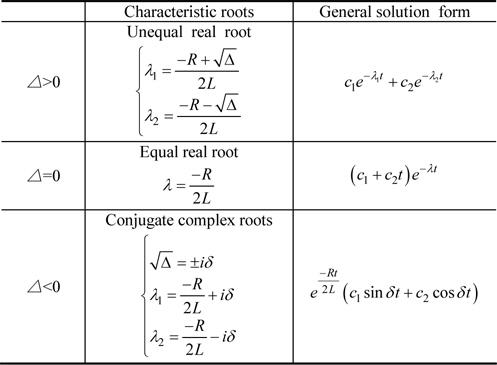 According to the above analysis, the essence of the interharmonic oscillation in the APF system based on MFC is that the APF system is unstable to the inter-harmonics. In order to solve this problem, the principle of the “equivalent negative resistance” of the series transformer must be weakening.

The inverter output current contains no harmonic current when β is equal to 0. This is the traditional series hybrid APF based on the fundamental magnetic flux compensation. The stability of this APF has been proved by many literatures such as [7-8, 11].

Compared with the passive power filter, the major defect of active power filter is the high cost. New topologies and control strategies which can reduce the capacity of the inverter have been became the research hotspot of APF. In this series hybrid APF based on MFC, the harmonic component of the system current is very little after filtering. Adding harmonic current reference will not increase the capacity of the inverter but improve the filtering effect. So the harmonic current reference is significative.

In this voltage feed-forward method, an additional reference current component I2′ is adding to the current reference. I2′ is proportional to Um and the proportion coefficient is a negative value. Since the leakage inductance can be ignored, Um is equal to the voltage of the series transformer primary winding. The vector diagram of series transformer is shown as Fig. 8. I2 is the reference current obtained by Eq. (8). I2′ is the voltage feed-forward control reference current. The total reference current is the sum of I2 and I2′. Compared with Fig. 5, it is very clear that the imaginary part of Im in Fig. 8 is less. As a result, the inter-harmonics stability of APF system has been enhanced. The inter-harmonics oscillation will be eliminated. Beside I2′, there is not any other change of the series hybrid active power filter. 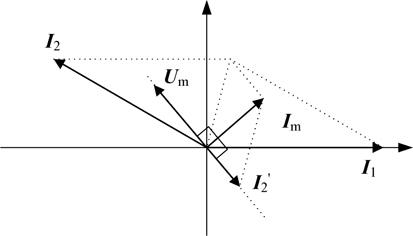 The simulation circuit is shown as Fig. 9. The circuit parameters are equal to the experiment circuit in our laboratory. The mutual inductance between the primary winding and the secondary winding of the series transformer is 15mH; the turns ratio of the series transformer is 1/1; the leakage inductance of the primary winding is 0.5mH; the passive power filter consists of 5th turned LC filter, L5= 2.13mH, C5 = 68uF, the capacitor is Δ connected. The number of 5th turned passive filter is 3 (In Fig. 9, only 2 LC passive filter is plot out). The output inductance of each inverter is 1mH. The load of the silicon controlled rectifier is 2.8Ω and 10mH. In addition, a 0.5Ω resistance is series connected with each phase inverter in the simulation circuit to represent the total system damping. 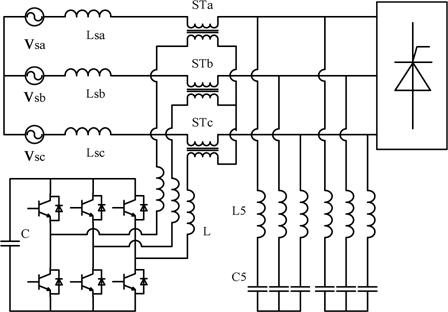 Fig. 10 shows the simulation system current results with different conditions. The harmonics compensation coefficient β is equal to 1 in every condition. 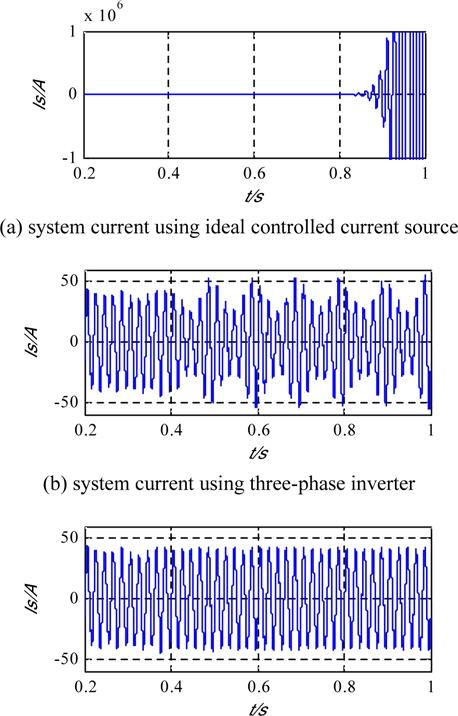 Using three ideal controlled current sources instead of the inverter in Fig. 9, system current is shown as Fig. 10(a). The system current shows that the APF system is unstable to the inter-harmonics. This simulation waveform validates the above analysis

A prototype based on the system configuration shown in Fig. 9 has been built. The main circuit parameters are same to the simulation circuit. The capacitor at the DC side is 6800μF/400V electrolytic capacitor, 4 parallel and 2 series connection. The inverter uses IPM of PM300CLA120. The switching frequency is 12.8 kHz. The CPU chip of the APF system is the digital signal processor (DSP) TMS320F2812 manufactured by Texas Instruments (TI). Experimental waveforms are recorded by the TEK2000 digital oscilloscope.

Fig. 11(a) shows the system voltage and current waveforms while the 5th turned passive filter is under working. The rms value of the system current is 24.1A. The total harmonic distortion (THD) is 13.97%. 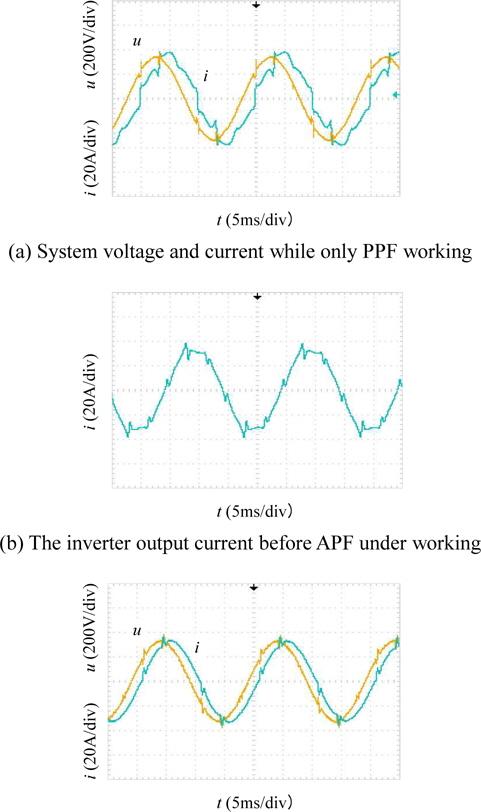 Research in this paper shows that the essence of inter-harmonics current oscillation in the SHAPF based on the magnetic flux compensation is that the APF is unstable to the inter-harmonics. If the “negative equivalent resistance” of the series transformer is larger than the system damping, APF is unstable to the inter-harmonics in theory. Limited by the capacity of the actual inverter, the inverter output current can not track the system current to infinity. Then the inter-harmonics oscillation happens. Though the conclusion of this paper is based on the period average algorithm LPF, the conclusion is also correct when adopt other LPF algorithms, such as Butterworth filter, and Bessel filter, et al.