Modern wind generators (WGs) are forced or encouraged to participate in frequency control in the form of inertial and/or primary control to improve the frequency stability of power systems. To participate in primary control, WGs should perform deloaded operation that maintains reserve power using speed and/or pitch-angle control. This paper proposes an optimization formulation that allocates the required reserve to WGs to maximize the kinetic energy (KE) stored in a wind power plant (WPP). The proposed optimization formulation considers the rotor speed margin of each WG to the maximum speed limit, which is different from each other because of the wake effects in a WPP. As a result, the proposed formulation allows a WG with a lower rotor speed to retain more KE in the WPP. The performance of the proposed formulation was investigated in a 100-MW WPP consisting of 20 units of 5-MW permanent magnet synchronous generators using an EMTP-RV simulator. The results show that the proposed formulation retains the maximum amount of KE with the same reserve and successfully increases the frequency nadir in a power system by releasing the stored KE in a WPP in the case of a disturbance.

Global wind power generation has increased signifycantly in recent decades because of technical advances. The global installed capacity of wind generation was 317 GW in 2013 and is expected to increase to 596 GW by 2018 [1]. In Korea, the installed capacity of wind generators (WGs) was approximately 605 MW in 2014 and will increase to 17 GW by 2027 [2].

Variable-speed WGs are widely used for their maximum power point tracking (MPPT) control, which optimizes the rotor speed according to wind speed. However, WGs do not respond to changes in frequency; thus, the frequency stability for a highly-wind-penetrated power system is often degraded as a result of MPPT operation [3].

To solve this problem, frequency control requirements have been included in the grid codes [4, 5]. These requirements can be classified into two groups: inertial and primary controls [6, 7]. The former temporarily releases the kinetic energy (KE) stored in a rotating mass of WGs, whereas the latter uses the reserve that is retained by pitch and speed controls.

To emulate inertial control, WGs use auxiliary loops based on the rate of change of frequency and / or the frequency deviation. The inertial control capability of the WGs is dependent upon the stored KE [8]. To execute primary control, the WGs retain the reserve, which is obtained by pitching and / or overspeeding [9, 10]. Overspeeding can increase the KE, while pitching cannot.

This paper proposes an optimization formulation that allocates the required reserve to the WGs to maximize the KE stored in a WPP. It assumes that a WPP should retain the required reserve to support frequency control. The proposed optimization formulation allows a WG with a low rotor speed to retain sufficient KE to maximize the KE of the WPP. In addition, the wind speed approaching a WG in a WPP is calculated with consideration of the wake effect. The performance of the proposed optimization formulation is investigated for a model system that consists of five synchronous generators (SGs) and a 100-MW WPP with 20 units of 5-MW permanent magnet synchronous generators (PMSGs) using an EMTP-RV simulator under various wind conditions.

2. Optimal Reserve Allocation to Maximize the KE of a WPP Considering the Wake Effect

The wind speeds arriving at the WGs in a WPP will vary because of the wake effect; thus, individual WGs will operate at different rotor speeds. This means that WGs have different margins between the operating rotor speed and the maximum rotor speed limit.

This paper aims to provide an optimization formulation that allocates the required reserve of a WPP to the WGs to obtain the maximum KE, which will be released to support frequency stability during a disturbance. We explain how a WG obtains the reserve, describe the wake effect model used in this paper, and formulate the optimization problem. 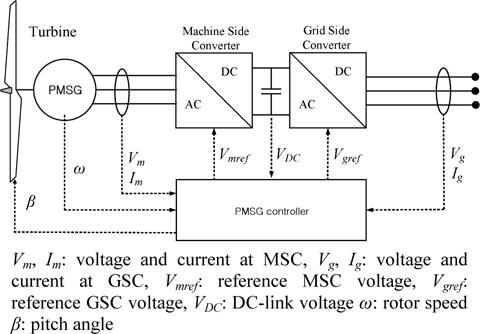 Fig 1.Typical configuration of a PMSG

The mechanical input power of the PMSG extracted from the wind, Pm, can be represented by

where ρ, R, v, λ, and β are the air density, blade length, wind speed, tip speed ratio, and pitch angle, respectively; in this paper, ρ and R are set to 1.225 kg/m3 and 60 m, respectively. cP is the power coefficient and can be represented by

where J, Kr, Tm, and Te are the moment of inertia, rotor damping coefficient, mechanical torque, and electromagnetic torque, respectively.

A PMSG controller regulates the machine-side converter (MSC) and grid-side converter (GSC) using the measured the voltages and currents at both sides of the converters and the rotor speed. In this paper, the MSC controls the torque of the PMSG, whereas the GSC maintains the DC-link voltage and reactive powers injected into the grid. In addition, a pitch-angle controller is used to prevent the rotor speed from exceeding the maximum operating limit.

2.2 Obtaining the reserve of the PMSG

To support frequency control, a WG should retain the required reserve. To maintain the reserve, the power coefficient of a WG should be intentionally reduced by increasing the rotor speed and/or pitch angle.

Fig. 2 illustrates the power-speed curves of the PMSG. The black solid and dotted lines are the mechanical input power curves of the PMSG in p.u. under various wind speeds at the pitch angles of zero and four degrees, respectively; the blue solid line is the electrical output curve for MPPT operation, and the red dotted line indicates the maximum rotor speed limit of 1.1 p.u. The base values of power and rotor speed are set to 5 MW and 94.2 rad/s, respectively. Assuming that the PMSG is performing MPPT control at the wind speed of 9 m/s, the PMSG operates under conditions represented by the red circle in Fig. 2. The reserve can be obtained by overspeeding and/or pitching, during which the operating point should be moved from the red circle. Note that, unlike pitching, overspeeding can retain more KE in the rotor while retaining the reserve. 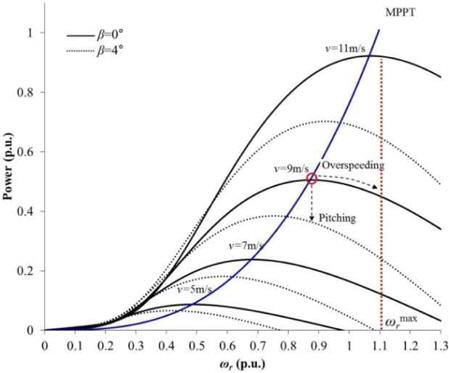 Fig. 2.Power-ωr curves of the PMSG in different wind speeds and pitch angles

In a WPP consisting of multiple WGs, the wind speed of the downstream WGs is reduced because of the upstream WGs; this kind of shadowing is referred to as the wake effect, which leads to differences between incoming wind speeds and corresponding power curves in WGs. Consequently, the WGs in a WPP operate at different conditions in terms of rotor speed and the chosen margin of the rotor speed limit.

2.4 Optimization formulation to maximize KE in a WPP

There are various combinations to retain the required reserve in a WPP. In this paper, the reserve of WGs is optimized to maximize the KE in a WPP to improve the frequency support capability. The KE stored in the rotating mass of a PMSG can be represented by

Normalizing both sides of (6) by the apparent power yields

where H and ωr are the inertia time constant of a PMSG in second and rotor speed in p.u., respectively.

The proposed optimization formulation is given by

Fig. 3 shows a model system chosen to investigate the performance of the proposed optimization. This system consists of five conventional SGs, a 100-MW PMSG-based WPP, and a static load of 600 MW and 9 MVAr. Further information on the generators is presented in the following subsections.

The total generation capacity of five SGs in the model system is 800 MVA, which consists of two 200-MVA SGs, two 150-MVA SGs, and one 100-MVA SG. For convenience, it is assumed that all SGs are steam turbine generators, and the droop gain of the SGs is set to 5 %, which is the typical value.

The WPP consists of 20 units of a 5-MW PMSG. The distance between adjacent PMSGs is 840 m, which is 7D, where D is the diameter of the swept area of a PMSG. As shown in Fig. 3, three feeders are connected to a collector bus. The first and second feeders are composed of seven PMSGs, and the third feeder is composed of six PMSGs. The collector bus is connected to a 22-km-long submarine intertie cable through two 60-MVA substation transformers. The rated voltage of the inner and outer grids is 33 kV and 154 kV, respectively.

Fig. 4.Power curve of the PMSG

The performance of the proposed formulation was investigated under various wind conditions using an active power control scheme for a disturbance, during which the frequency decreases to less than 59.98 Hz. Fig. 5 shows the active power-control loop implemented in the PMSG, where PMPPT is the power reference for MPPT operation. All PMSGs used in this study are assumed to perform the deloaded operation prior to a disturbance. If a disturbance occurs and the system frequency drops below 59.98 Hz, the active power reference is switched from , to PMPPT to release the stored KE and reserve power in the WPP. The pitch controller in the PMSG is used to restrict ωr,i to ωr,imax, as shown in Fig. 6, where T is the time constant of the pitch servo controller and was set to 1 s; the maximum rate limit was set to 10 °/s.

The wind speeds arriving at the WGs are calculated using the Park model, which is based on Jensen’s wake model and considers the cumulative impact of multiple shadowing and the wind direction [14]. Fig. 7 shows a shadow cone from an upstream WG. In the figure, U∞ is the incoming wind speed of the WG1 without any shadowing, x12 is the radial distance between WG1 and WG2, D1 is the diameter of WG1, and k is the wake decay constant. A1 presents the shadowed area by WG1 at the position of WG2, and is the overlap area between A1 and the swept area of WG2. In the Park model, the arriving wind speed of the i-th WG, Vi, can be calculated using the following equation,

where n is the total number of WGs, and αj the axial induction factor of the upstream WGj.

Fig. 8 shows the simulation results for Case 1. As shown in Fig. 8(b), the WPP output in MPPT operation is 41 MW and those of both reserve allocations are 37 MW until 300 s, which indicates that the WPP retains the reserve of 4 MW before the disturbance. After the disturbance, the reserve and KE are released because of the change in power reference from , to PMPPT. The optimal allocation releases a 33 MWs larger amount of KE than the dynamic allocation during the period of time from 300 s to 315 s. Thus, the frequency nadir for the optimal allocation is 59.617 Hz, which is 0.040 Hz higher than that of the dynamic allocation, and higher than that of MPPT operation by 0.284 Hz, as shown in Fig. 8(a). 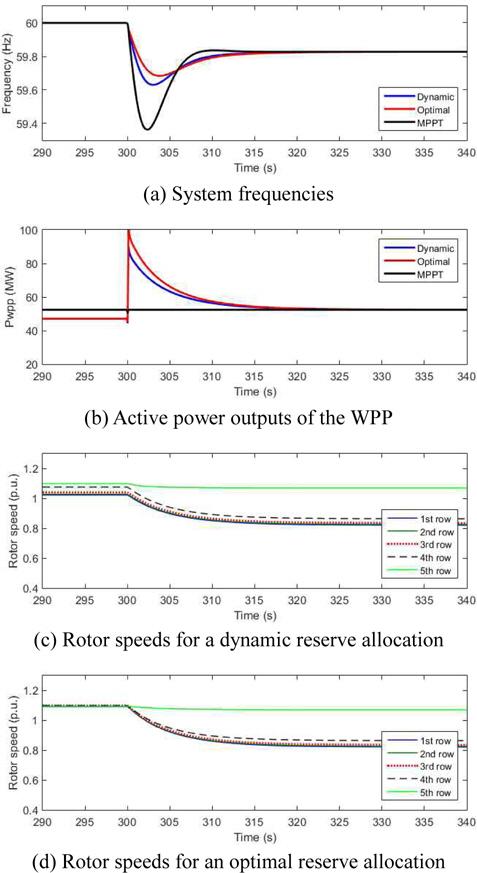 The results of the above three cases demonstrate that the proposed optimal allocation improves the frequency nadir more than the dynamic reserve allocation by releasing a larger amount of KE stored in the WPP under the various wind conditions.