Hamaticyclops ahni is described as a new genus and species from the Californian shore of the United States. It was discovered as a victim of the sea anemone Anthopleura elegantissima (Brandt). The new genus is closely related to the genus Hemicyclops but possesses, as significant autapomorphies, three strong claws on the second endopodal segment of antenna and a markedly elongate exopod of leg 5 with its protopod fused to somite.

Copepods of the family Clausidiidae Embleton, 1901 are generally known to be the most primitive among poecilostome cyclopoids. They live in association with various marine invertebrates, such as cnidarians, polychaetes, mollusks, and crustaceans, but many species have been found free.

During a field survey done in 2002 along the seashore of California, United States, I tried to collect some copepods associated with intertidal sea anemones. On the shore of Santa Barbara I sucked material in the gastrovascular cavity of sea anemones for copepods using a large pipette. Most of copepods collected in this way turned out to be species of the genus Doridicola in the family Rhynchomolgidae which were studied previously by Humes (1982) and Lönning and Vader (1984), but one of them was noticed as an exceptional, because it was a large, transparent exoskeleton of a copepod. Without doubt, it was not an internal associate of the sea anemone, but victim eaten by the latter predator, remained as an undigested material. This copepod exoskeleton was almost perfect for a taxonomic study, with nearly all appendages remained clean and transparent. It is herewith described as a new genus and species.

The exoskeleton of the single copepod specimen was collected from the gastrovascular cavity of the sea anemone Anthopleura elegantissima (Brandt) by sucking with a large pipette on the intertidal shore of Santa Barbara, California. Before dissection, the specimen was immersed in 90% lactic acid for about 10 min. Dissection was done using reversed slide method (Humes and Gooding, 1964). All figures were drawn with the aid of a drawing tube equipped on a light microscope (Olympus BH-2; Olympus, Tokyo, Japan). Legs 3-5 were drawn in situ. In the armature formula of legs 1-4 given in the description, Roman and Arabic numerals indicate spines and setae, respectively. The type specimen (holo-type) has been deposited in the National Institute of Biological Resources (NIBR), Incheon, Korea.

Etymology. The generic name is the combination of hamatus, the Latin meaning “provided with hooks” and -cyclops, the ending of Hemicyclops, a genus of the family Clausidiidae. It alludes to the presence of strong claws on the second endopodal segment of the antenna and the close relationship between the two genera. Gender is masculine. 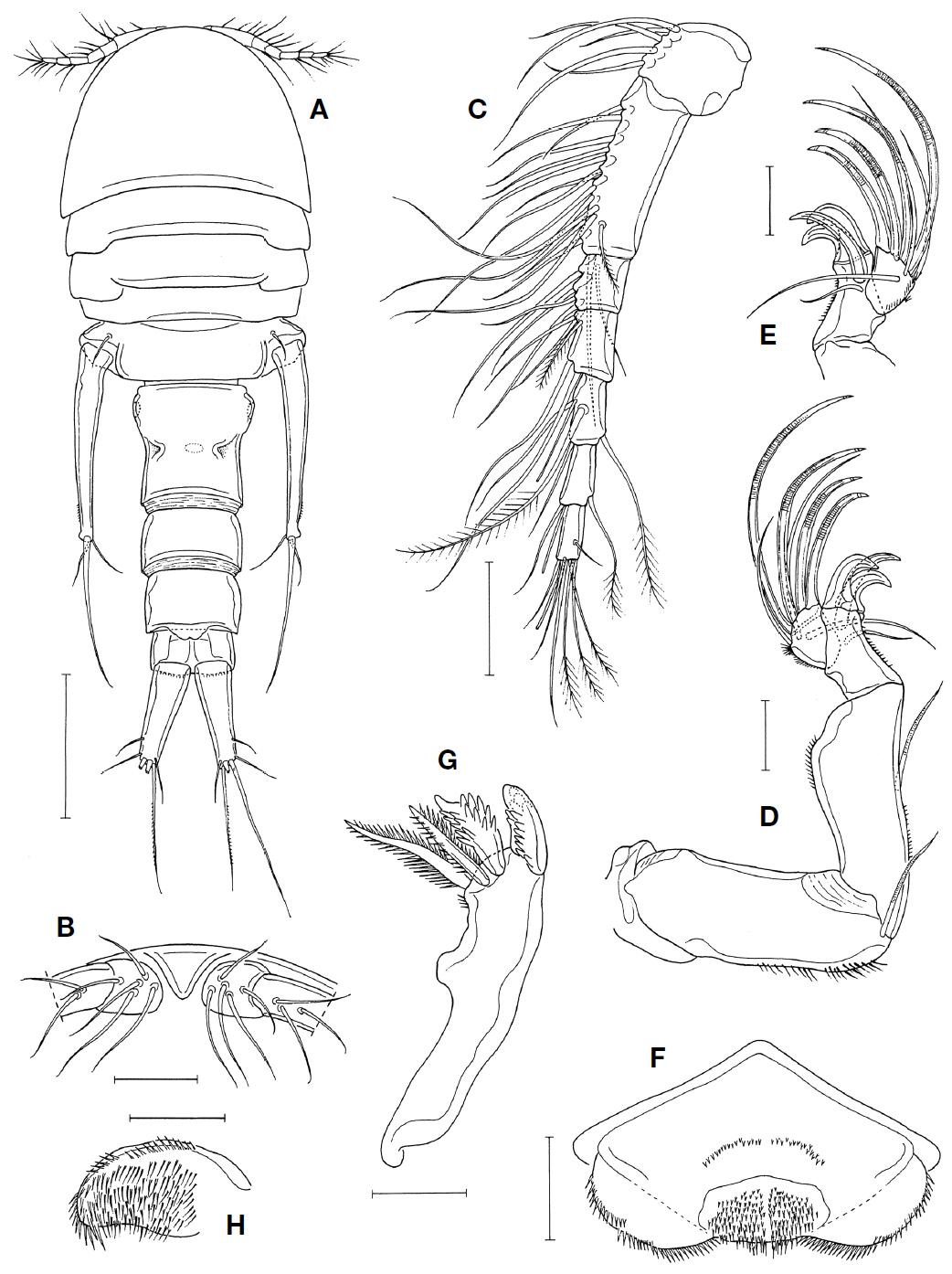 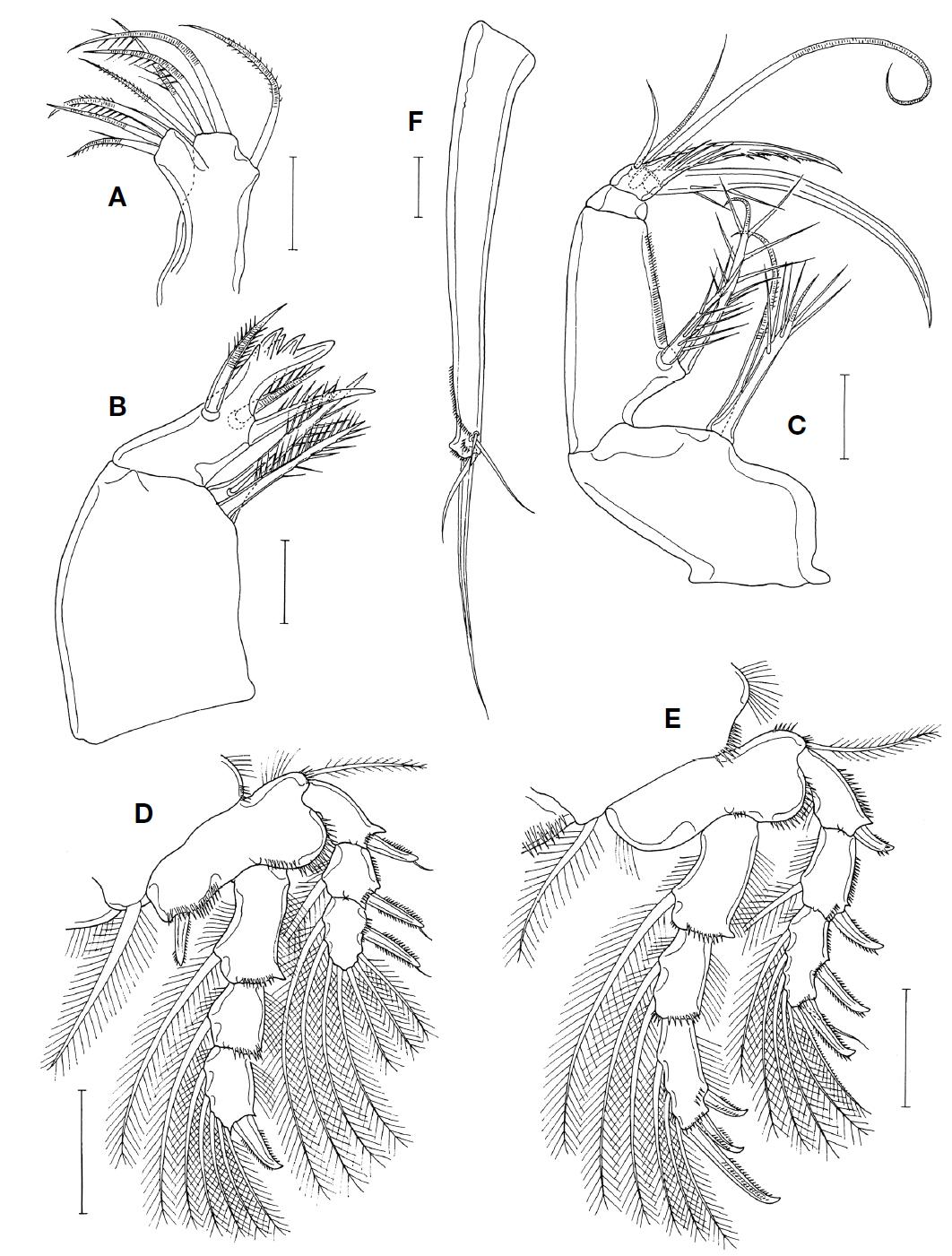 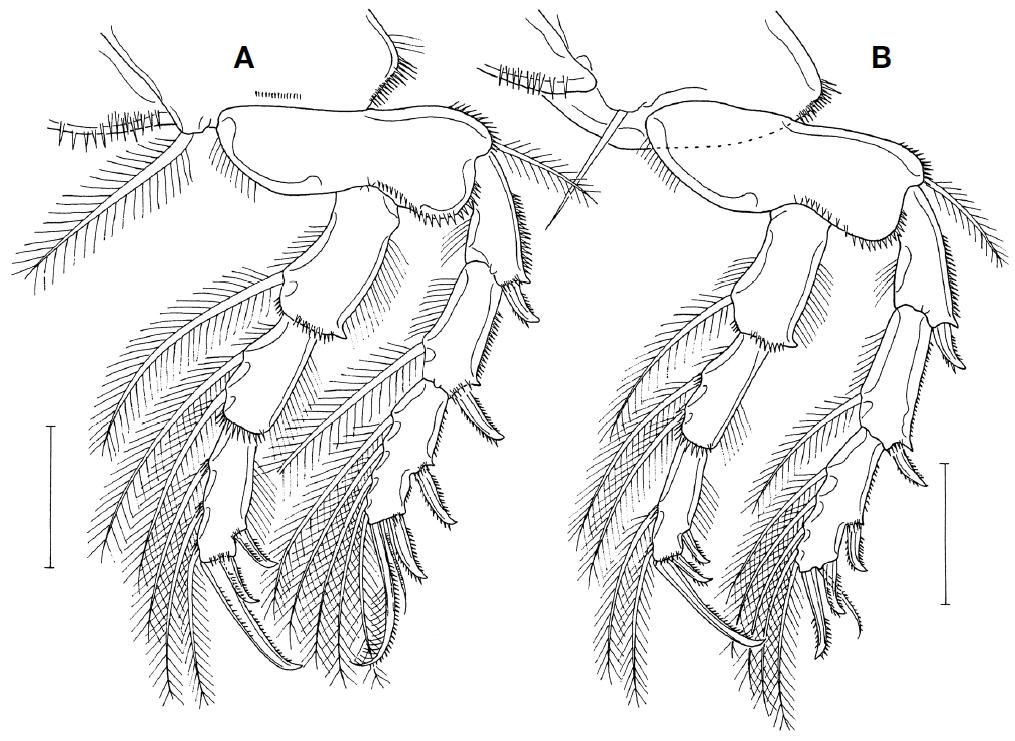 Material examined. One ♀ (holotype, without antenna and legs 1 and 2 of right side) from the gastrovascular cavity of the sea anemone Anthopleura elegantissima (Brandt), intertidal, Santa Barbara (34°23′50″N, 119°42′07″W), California, United States, 2 May 2002, collected by Kim IH. Holotype has been deposited in the National Institute of Biological Resources (NIBR), Incheon, Korea. The holotype is partly dissected and consists of the followings: (1) body, preserved in a vial, with undissected left antennule, right mouthparts (mandible, paragnath, maxillule, maxilla and maxilliped), left leg 1, left leg 2, and pairs of legs 3-5; and (2) a glass slide mount containing dissected appendages including right antennule, left antenna, left mouthparts (mandible, paragnath, maxillule, maxilla and maxilliped).

Legs 1-4 (Figs. 2D, E, 3A, B) with 3-segmented rami. Endopod of legs 1 and 2 distinctly longer than their exopod. Inner seta on coxa of legs 1-3 pinnate, but that of leg 4 naked. Posterior margin of intercoxal sclerite of leg 1 with setules but those of legs 2-4 with spinules. Outer spines on exopod of leg 1 with subapical setule. Armature formula of legs 1-4 as follows:

Etymology. The specific name ahni is named after the entomologist Dr. Kee-Jeong Ahn, Department of Biology, Chungnam National University, who introduced the author to the trip to the Californian shore in 2002.

Boxshall and Halsey (2004) removed Foliomolgus Kim, 2001, Leptinogaster Pelseneer, 1929 and Pholadicola Ho and Wardle, 1992 from the Clausidiidae to the “Teredicola-group” that they created. They characterized this group as having a well- developed claw on the second endopodal segment of the antenna, the laterally displaced terminal endopodal segment of the same appendage, and three blade-like distal elements on the mandible (Boxshall and O’Reilly, 2015). Although Hamaticyclops n. gen. possesses a similar form of the antenna, it cannot be placed in the Teredicola-group, because it does not share with these genera any derived form of the mandible. Instead, the new genus is included in the Clausidiidae. It is closer to Hemicyclops than to any other known genera and has a Hemicyclops-type mandible and other mouthparts, and no reduction in leg setation. Several species of Hemicyclops have one or two claw on the second endopodal segment of the antenna as mentioned below and in many species of the genus the inner distal corner of the second endopodal segment is pronounced distally which results in the lateral displacement of the terminal segment, as shown by H. acanthosquillae Humes, 1965 (see Humes, 1965).

The most characteristic features of Hamaticyclops n. gen. are the possession of the three powerful claws on the second endopodal segment of the antenna and the extremely elongated exopod of leg 5. Within the Clausidiidae, the antenna bearing at least one claw on the same segment is observable in the genera Conchyliurus and Hemadona and some species of Hippomolgus and Hemicyclops. The genus Conchyliurus has a 6-segmented antennule, 3 modified distal elements on the mandible, and highly modified maxilla and maxilliped, and is, therefore, clearly different from Hamaticyclops. The genus Hemadona also different from Hamaticyclops in having an elongated, cylindrical body, a 6-segmented antennule, and a simplified maxilliped. Among three species of the genus Hippomolgus, H. cognatus Humes and Ho, 1967 and H. latipes Humes and Ho, 1967, both known as associates of a coral in Madagascar (Humes and Ho, 1967), have a claw on the second endopodal segment of the antenna. However, Hippomolgus bears, unlike Hamaticyclops, a 6-segmented antennule, no seta on the proximal segment of maxilla, and a simplified maxilliped. In the genus Hemicyclops, five species are known to have claw(s) on the second segment of the antenna. They are H. cylindraceus (Pelseneer, 1929), H. livingstomi (T. Scott, 1894), H. perinsignis Humes, 1973, H. membranatus Moon and Kim, 2010, and H. acanthophorus Humes, 1995. However, none of these species has three claws on that segment of the antenna, although H. cylindraceus and H. livingstoni are known to have two claws (Scott, 1894; Stock, 1954).

Hamatocyclops n. gen. seems to be among the most plesiomorphic copepods within the Clausidiidae, showing closeness to Hemicyclops, as mentioned above. It reveals a number of primitive morphological conditions, such as the 7-segmented antennule, the mandible bearing four distal elements, and the plesiomorphic maxillule, maxilla and maxilliped. There is no reduction in the setation of legs in Hamaticyclops n. gen., either. The presence of the nine elements on the third exopodal segment of leg 4 is noticeable in particular, because in most species of the Clausidiidae this segment bears eight elements (only four species in Hemicyclops have nine elements, as Hamaticyclops n. gen.).

Another characteristic feature of Hamaticyclops n. gen., the exteremely elongate exopod of leg 5, is considered to be one of significant apomorphies. Although some species of Hemicyclops reveal a tendency of the elongation of the exopod of leg 5, as shown in H. tamilensis (Thompson and Scott, 1903) and H. cylindraceus, the magnitude of its elongation is hardly comparable with that of Hamaticyclops n. gen., because their leg 5 exopod seldom exceed 3 : 1 in the ratio of the length to the width.

In summary, Hamaticyclops n. gen. may be characterized by the possession of three powerful claws on the second endopodal segment of the antenna and the elongate exopod of leg 5. The complete fusion of the protopod of female leg 5 to the fifth pedigerous somite and the enlargement of a seta on the terminal segment of the maxilliped also seem to be diagnostic features of the new genus.