We surveyed moths on Gageodo island in the southwestern sea of the Korean Peninsula over three years (2009, 2012, 2013) and found a total of 253 species in 18 families. Geometridae had the greatest species richness, with 63 species, followed by Noctuidae, Erebidae, Crambidae and Sphingidae. The annual changes in species richness and abundance were not different and seasonal occurrence of species showed a unimodal pattern in which the numbers of species and individuals increased from April and May, peaked in June and decreased to September and October. Seven moth species (Pyralidae: Herculia drabicilialis Yamanaka, Didia striatella (Inoue); Crambidae: Clupeosoma pryeri (Butler), Demobotys pervulgalis (Hampson), Yezobotys dissimilis (Yamanaka), Syllepte cissalis Yamanaka; Erebidae: Hypena sinuosa (Wileman)) are reported for the first time in Korea.

The Island of Gageodo (old name: Soheuksando), Shinan county of Jeollanamdo province is located on the southwestern tip of the Korean peninsula (34°03′N, 125°07′E, 16.34 km2). This island is a southwestern national border island between Korea and China (Fig. 1), about 136 km southwest from Mokpo and 70 km southwest from the Island of Heuksan-do. The largest peak on the island is Mt. Doksilsan (elevation 639 m), which is the third highest peak in the islands of Korea. In addition to elevation, the island is important in geography since it is located in the most southwestern part of Korea and a migratory bird passage between the southern China and mainland Korea. Therefore this island harbors diverse flora (783 vascular plants) and avifauna (128 bird species). 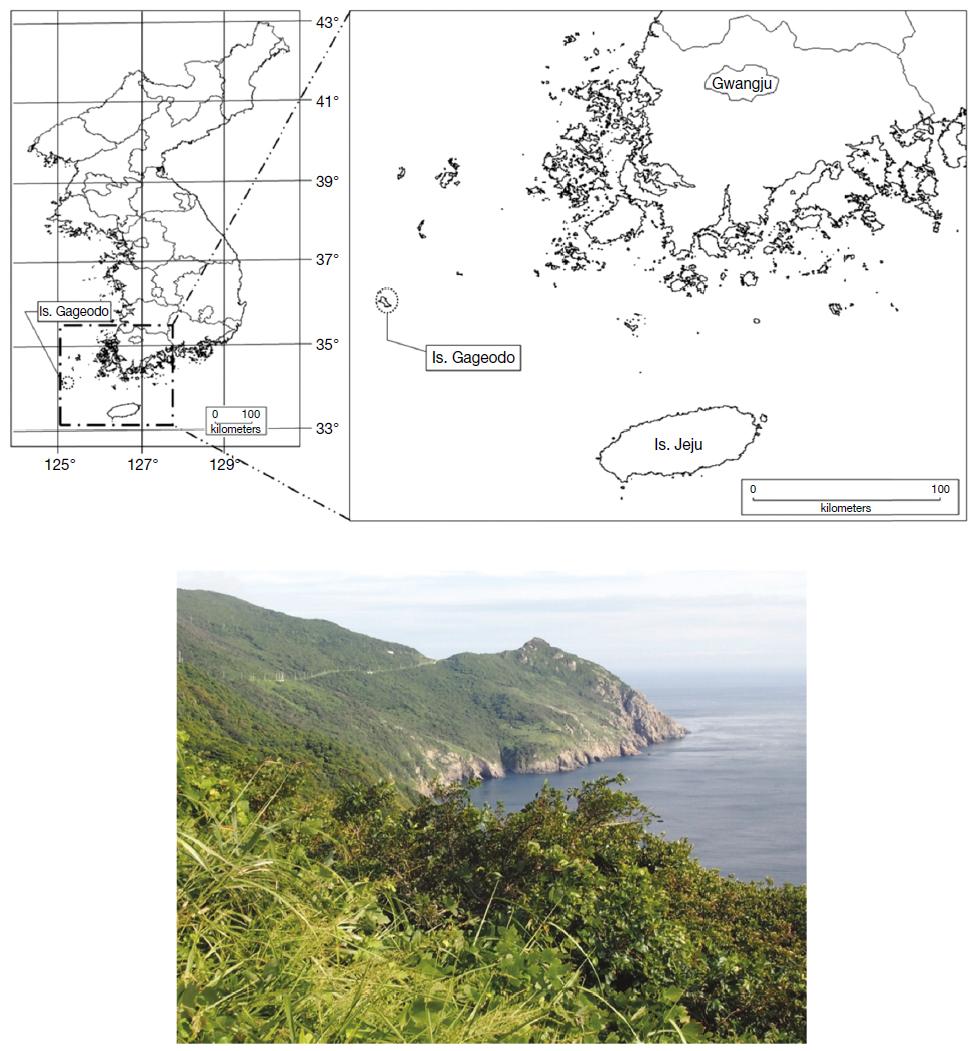 Moth fauna of the island was first surveyed by Shin and Nho (1970), and later by others (Ra et al., 1986; Choi and Lee, 1995; Choi et al., 2009). The present study was conducted to investigate the moth fauna by compiling all previous information regarding the distribution of moths. In addition, we report seven new records of moths for the first time in Korea. 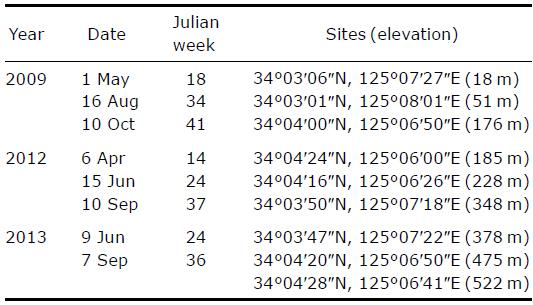 A total of 253 species and 2,707 individuals in 18 families were recognized from the three-year-survey on Gageodo Island. During the last 40 years, the moth fauna of the island has been relatively unknown because of limited access to the island. We expected that the total number of moth species would increase since the previous studies were focused on macromoths. 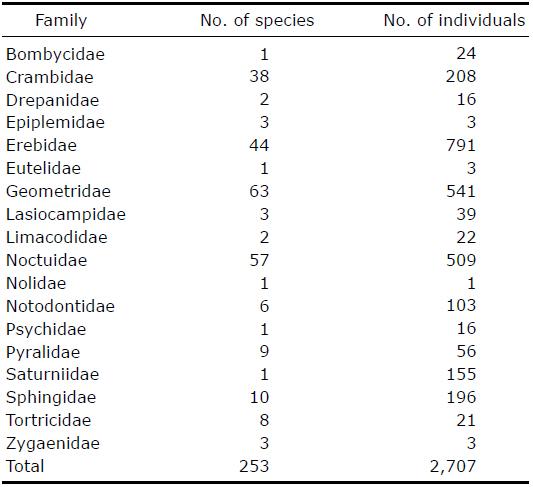 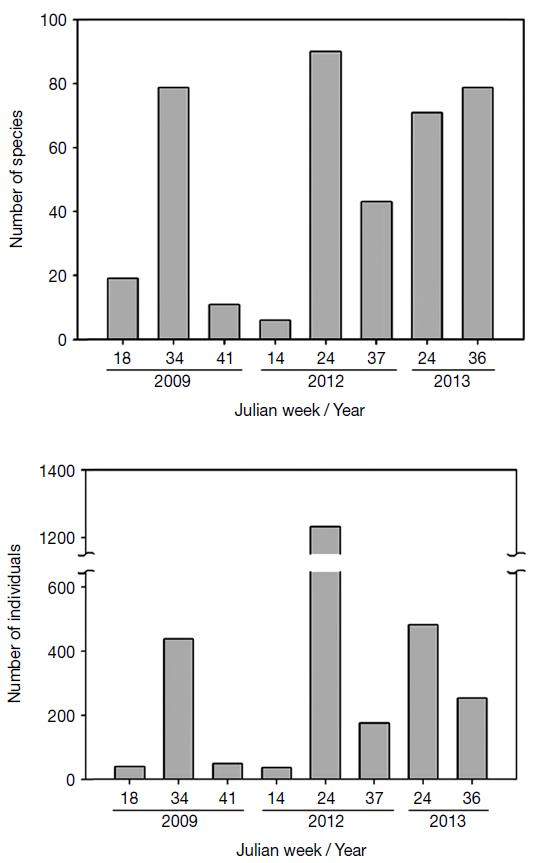 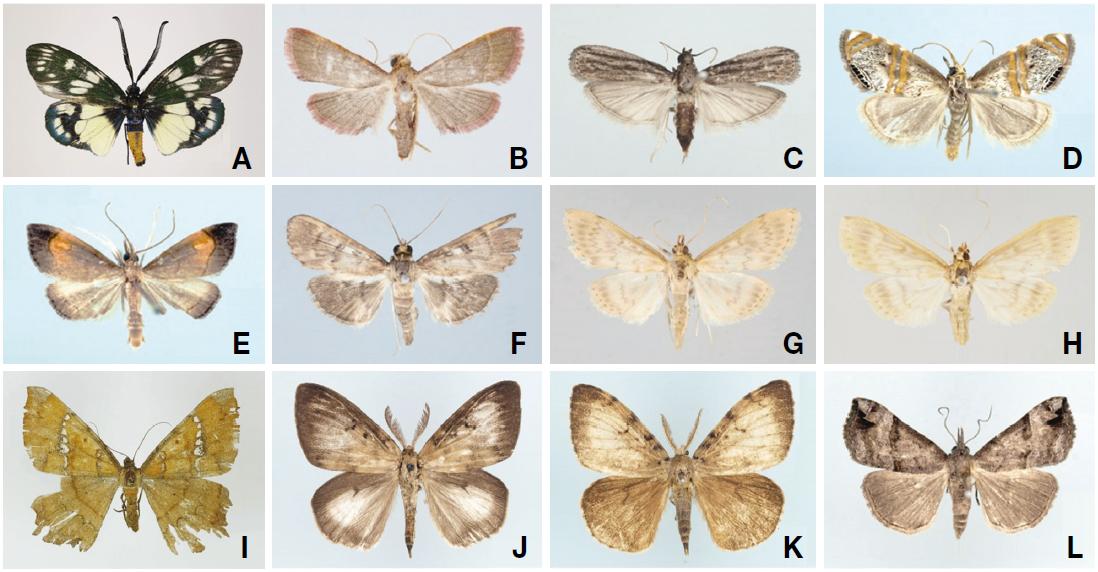 Note. This species has not been found since the first specimen was caught from this island (Choi and Owada, 2010). Although Gageodo island is closer to southern China, the morphological characteristics of the specimen more closely resemble those from Japan than China (Choi and Owada, 2010). This could support the hypothesis that the moth fauna in the southern Korean sea are similar to those on the islands of Japan. However, further study is needed to confirm this.

Diagnosis. Wing expanse 22 mm. The adults show cuspid-like, upturned labial palpi that are covered with blackish brown scales, filiform antennae, grayish forewings with long blackish horizontal strips from the costa to termen and whitish hindwings with blackish scales on veins. This species is superficially similar to Trisides fasciatellus (Inoue, 1982), but can be distinguished by the brown or dark ground color of the forewing, narrow grayish costa, blackish long horizontal strips and the whitish hindwing with blackish scales on veins. The female genitalia can be distinguished by the small papilla anales, long apophyses, weakly sclerotized ostium bursae, anteriorly expanded ductus bursae and large ovate corpus bursae with a large patch of dense processes of signa.

Diagnosis. Wingspan 19 mm. This species can be distinguished by male genitalia that show two pairs of long thin processes from the basal part of the valva costa and three spinular processes in the aedeagus. This species was not listed in the Korean literature (Bae et al., 2008; Park et al., 2012). In Japan, this species was found in Hokkaido, Kyushu and Tsushima (Sasaki, 2013). Sasaki (2013) noted that this organism occurs in the northern part of the Korean peninsula. However we found this species in the southern part of Korea. 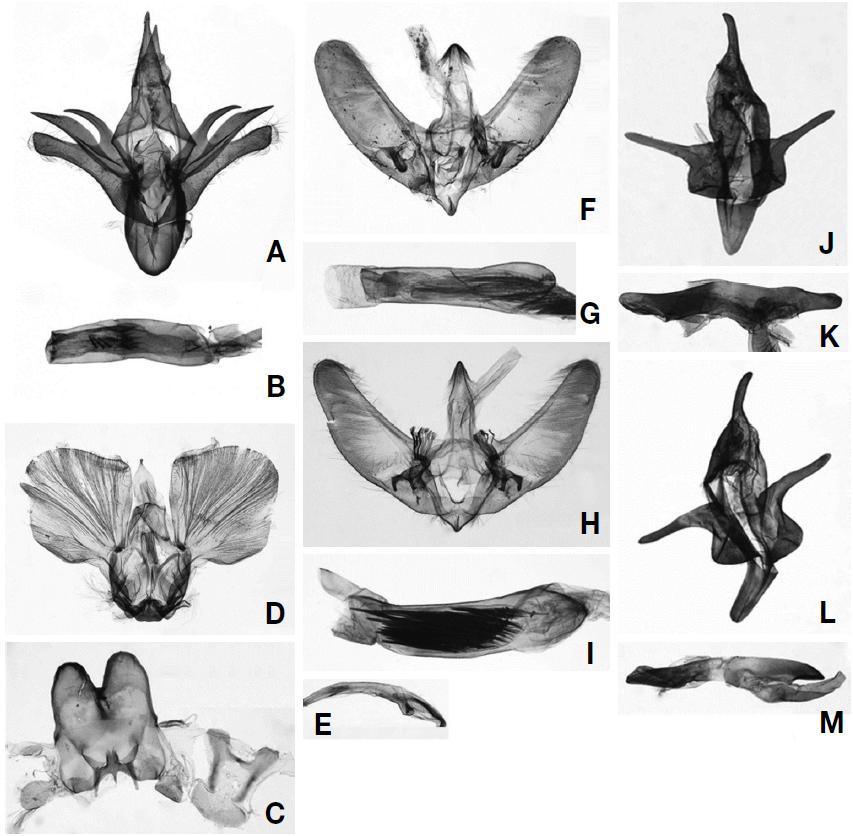 Diagnosis. Wing expanse 16 mm. The species can be distinguished by the filiform antennae, long, porrect labial palpi, orange ground color of the forewing that shows the medially curved ante- and postmedial lines, lunular discocellular dot and blackish broad termen, and pale blackish hindwing with blackish postmedial line and termen. The male genitalia can be distinguished by the large fan-shaped valva with blackish stripes, triangular uncus, long, tongue-shaped juxta and short saccus, as well as the medially curved aedeagus without a cornutus. The 8th male abdomen showed a M-shaped strongly sclerotized plate anteriorly and a tri-pod shaped process posteriorly.

Diagnosis. Wing expanse 22 mm. The adults can be distinguished by the filiform antennae, the blackish forewing with long blackish discocellular spot and the medially strongly bent postmedial line and the blackish hindwing with blackish ante- and postmedial lines. The female genitalia can be distinguished by the simple small papillae anales, short apophyses, tube-shaped weakly sclerotized antrum, long ductus bursae and ovate corpus bursae with an elliptical signum patch and a short triangular process.

Diagnosis. Wing expanse 22 mm. The adults can be distinguished by the yellowish filiform antennae, projected labial palpi beyond frons, yellowish body, yellowish white ground color of the forewing that shows pale blackish costa, central fascia with dark grayish horizontal lines on veins, medially strongly projected postmedial line and dark grayish horizontal lines on the termen and the yellowish white hindwing with grayish postmedial line and dots on the termen. The male genitalia can be distinguished by the strongly tapered uncus with apical hairs, slender valva with a long, button-shaped harpe, thin, hooked sacculus process and medially projected saccus, and the rod-shaped aedeagus with spinular cornuti. The female genitalia can be distinguished by the small papillae anales, simple ostium bursae, long, twisted ductus bursae and sac-shaped corpus bursae with a large, diamond-shaped signum.

Diagnosis. Wing expanse 24-28 mm. This species is very similar to Demobotys pervulgalis (Hampson), but can be distinguished by the broad central fasica of the forewing and the strongly dentate postmedial line of fore- and hindwings. The male genitalia are similar to those of Demobotys pervulgalis, but can be distinguished by the short spinular harpe and sacculus of valva, and the dense spinular cornuti of the male aedeagus.

Note. The largest geometrid species in Korea was first found from this island (Choi et al., 2013). In 2014, we also found few specimens hiding under leaves during daytime and flying at night.

Note. This species is externally similar to L. dispar (Figs. 3K, 4L, M), but can be distinguished by the smaller wingspan, darker ground color of the male wing, and the smaller male genitalia and short aedeagus. We suspected that this species occurs on the island, but no specimens were found during this survey.