A new cyclopoid species belonging to the genus Metacyclops Kiefer, 1927 is described, based upon the specimens from a temporary pool in a forest of Mt. Phnom Domnak Dambouk, situated in the southwestern part of Cambodia. Metacyclops woni sp. nov. is characterized by its quite short caudal rami, about 2.5 times longer than wide, with a spinule row on anterior quarter of lateral margin. This new species belongs to the species group with the spine formula 3,4,4,3 of swimming legs 1-4. Among the members of the species group with the combination of characters of 11-segmented antennule and a single apical spine on the second endopodal segment of leg 4, it most resembles M. deserticus Mercado-Salas and Suárez-Morales, 2013 from Mexico in carrying an outermost caudal seta slightly longer than the innermost caudal seta and an apical spine on the second endopodal segment of leg 4 slightly shorter than the segment. However, it differs clearly from the present new species by much longer caudal rami with lateral caudal seta at nearly halfway of lateral margin of the ramus and smooth posterior margin of intercoxal sclerites of legs 1-4. This is the first record of the genus Metacyclops from Cambodia and the fourth one from Southeast Asia.

Since the year 2009, the National Institute of Biological Resources of Korea (NIBR) has been conducting an international cooperative project of “Korean-Cambodian Joint Field Survey and Biodiversity Inventory Project” with the Forestry Administration of Cambodia. Professor Hyosig Won of Daegu University, Korea has engaged in the project, and he thankfully made a zooplankton collection for us in June, 2010. One of the sampling bottles he gave us included enough specimens for confirmation of a new species of Metacyclops.

The genus Metacyclops Kiefer, 1927 is widespread in tropical and temperate regions, being most prolific in European, African and South American regions; at present the genus comprises 62 nominal species and subspecies, most of them recorded in different groundwater habitats, such as wells, caves, anchialine habitats (Pesce, 2015). However, in Southeast Asia, despite its potentially rich fauna, only three species have been reported yet: M. malayicus Kiefer, 1930 from Sumatra (Kiefer, 1930), M. pectinatus Shen and Tai, 1964 from Kwangtung, China (Shen and Tai, 1964) and Malaysia (Lim and Fernando, 1985), and M. ryukyuensis Ishida, 1995 from Ryukyu Islands, Japan (Ishida, 1995).

The cyclopoid copepod fauna of Cambodia is very poor, “even when compared to its neighboring countries”, and this country remains as “one of the least explored area in Southeast Asia”; the information on the taxonomic studies of cyclopoid copepods is rather scarce and fragmentary in Cambodia (for details of history of cyclopoid taxonomy in Cambodia, see Chaicharoen et al., 2011). Recently, two reliable studies on the cyclopoid taxonomy have been accomplished in Cambodia: Ishida and Tomikawa (2007) reported a single species, Mesocyclops thermocyclopoides Harada, 1931 from Lake Tonlé-Sap; Chaicharoen et al. (2011) made a very comprehensive study and reviewed eight species of the genus Thermocyclops.

In this study, we describe a new cyclopoid species of the genus Metacyclops obtained from Professor Won’s Cambodian expedition, following the junior author’s latest studies on the stygobitic copepods from limestone caves in Vietnam, that is, two new harpacticoid species of Microarthridion thanhi and Nitokra vietnamensis (Tran and Chang, 2012), and a new Graeteriella cyclopoid species (Tran and Chang, 2013). This is the first record of the genus Metacyclops from Cambodia and the fourth one in Southeast Asia.

Samples were taken from a temporary pool (11°13ʹ18.1ʺN, 103°50ʹ30.6ʺE; 197 m in altitude) at a secondary forest along the trail to the newly built hydrodam situated in Mt. Phnum Domnak Dambouk, Koh Kong Province, Cambodia.

Copepods were collected with a hand net of 64 μm mesh aperture, and immediately fixed in the field by adding a few drops of saturated formalin. In the laboratory, the specimens were isolated from the samples under a zoom-stereomicroscope (Olympus SZX 12, Tokyo, Japan) at high magnifications (32-90×) with a micropipette, and transferred to about 80% ethanol for long-term preservation.

Type specimens are deposited in the National Institute of Biological Resources (NIBR), Incheon, Korea, and the specimen room of the Department of Biological Science, Daegu University (DB), Korea.

General terminology for the morphological description of the new species follows Huys and Boxshall (1991). Abbreviations are used in the text and figure legends, following those in Tran and Chang (2013): enp-1 to enp-2 or exp-1 to exp-2, the first to second endopodal or exopodal segments of each leg; P1-P6, first to sixth legs. 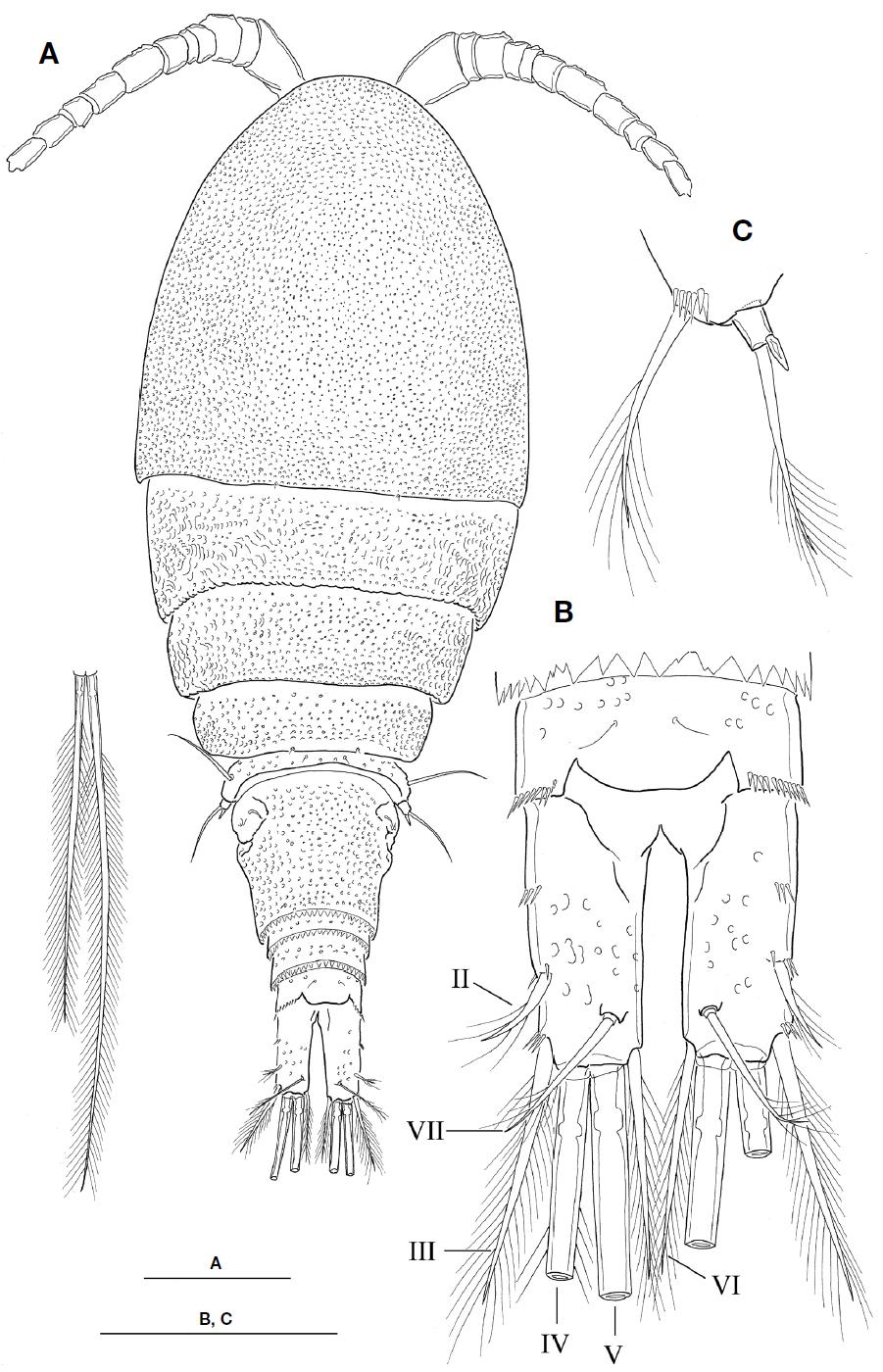 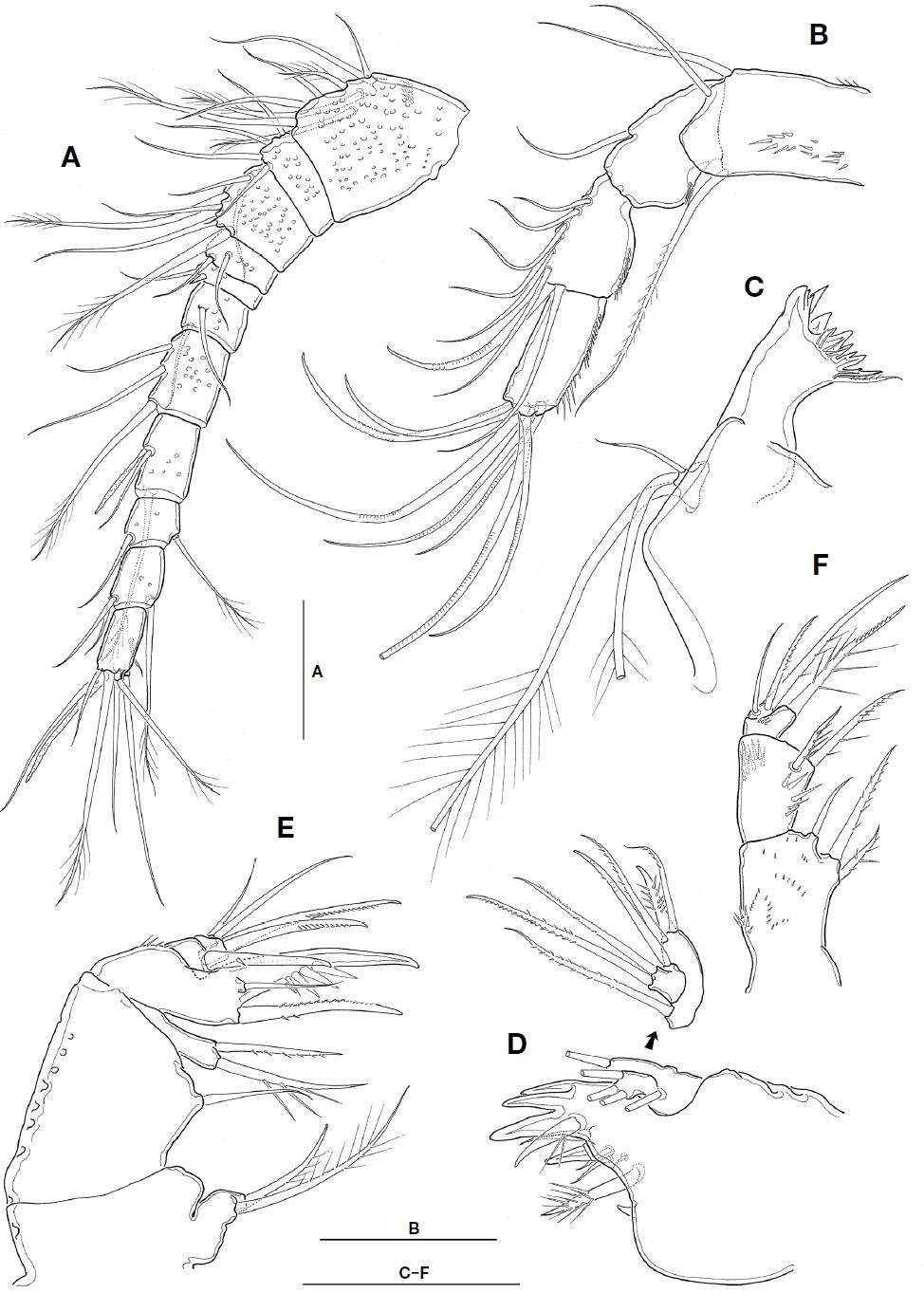 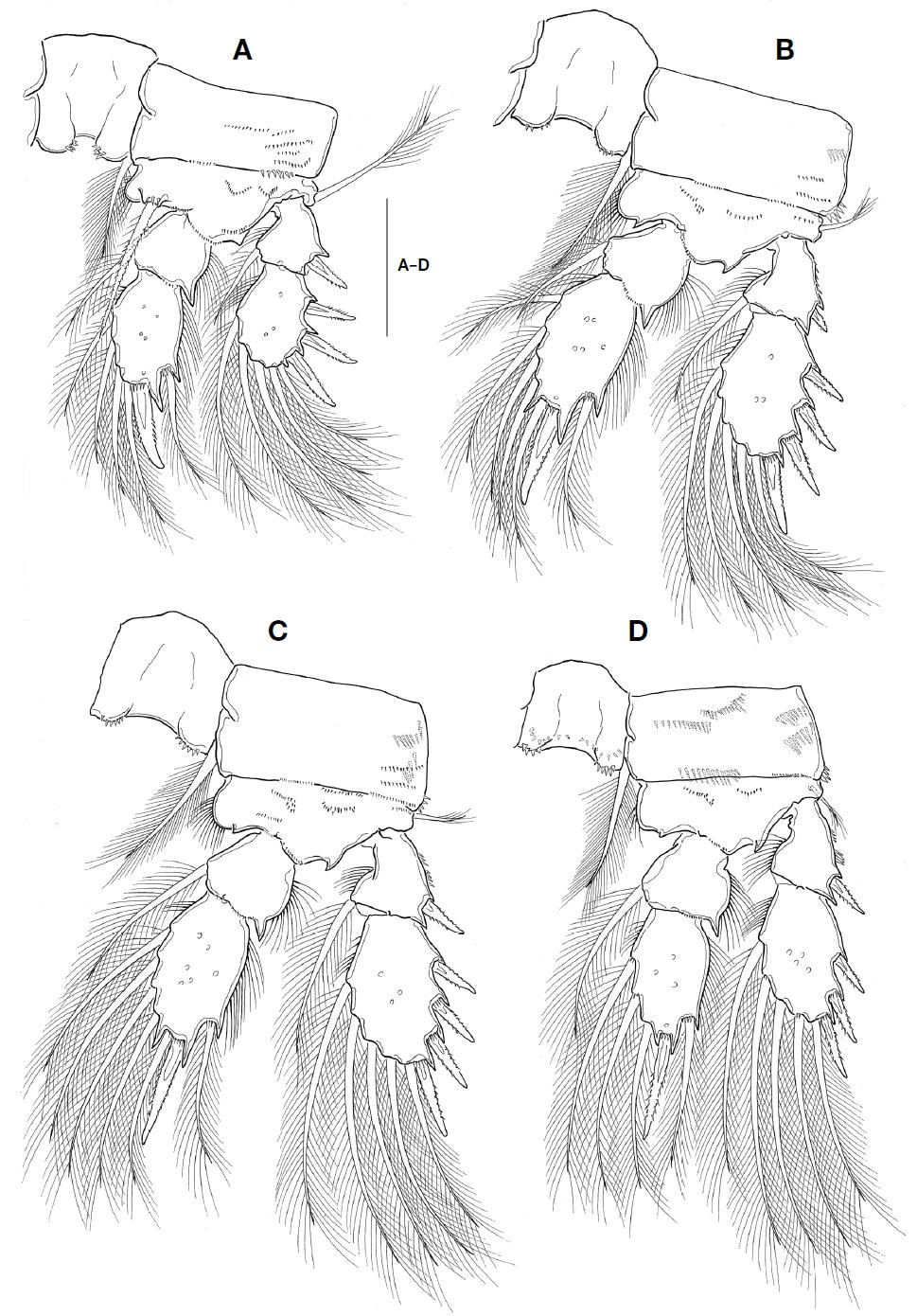 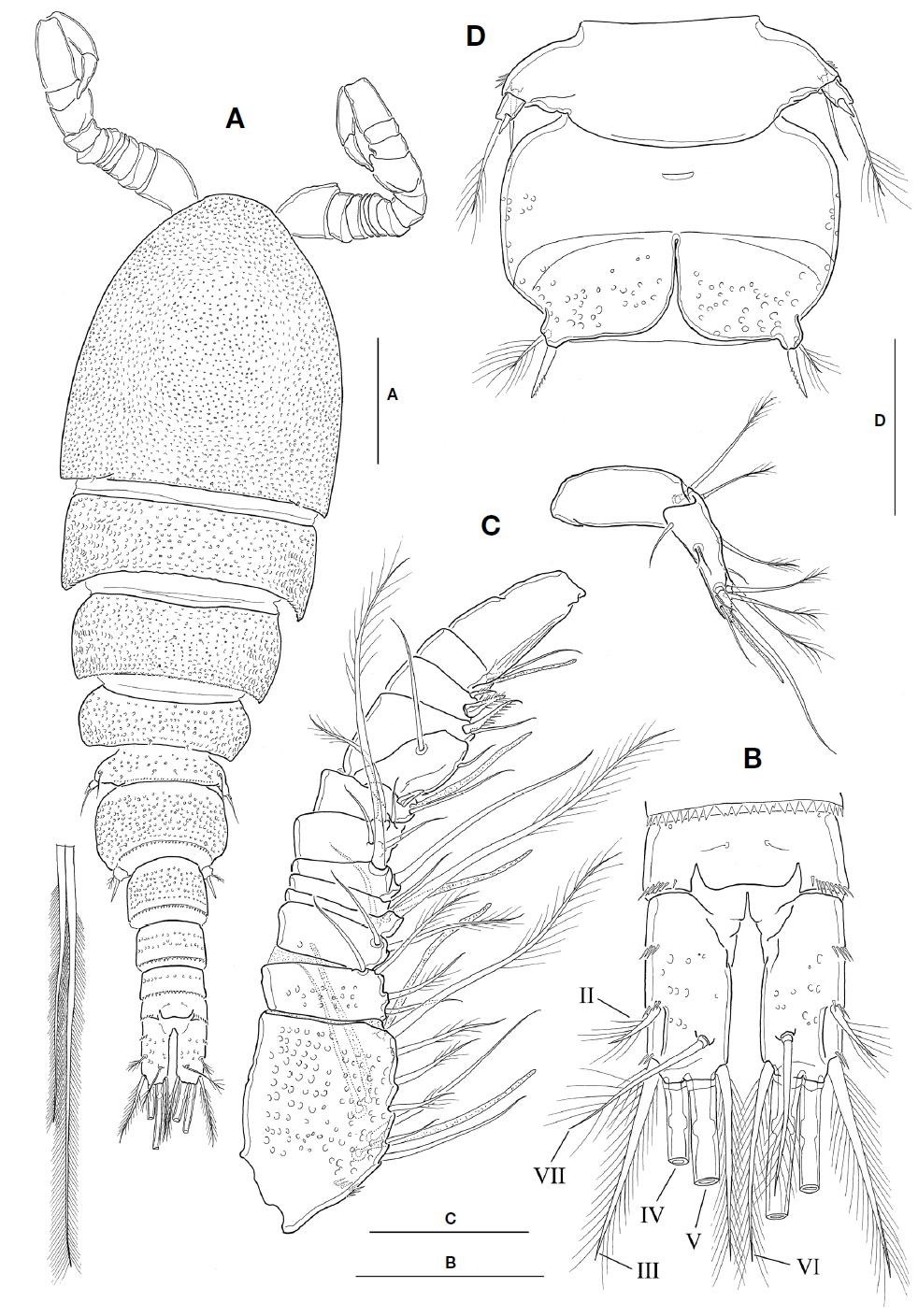 Other characters of mouthparts and P1-P5 nearly same as those of female.

Members of the genus are classified into four groups, based on the spine formula, that is, the spine armature on the terminal exopodal segments of P1-P4 (see Herbst, 1988; Reid, 1991; Karanovic, 2004). Among the groups, the absolute majority of members (54 of 62 species recognized in this genus) belong to the group with 3,4,4,3 formula, as well as the new species does.

Considering the Metacyclops species generally have relatively elongate caudal rami (ranging from about 3 to 5 times as long as wide), with few exceptions such as in M. malayicus (about 2 times) and M. ryukyuensis Ishida, 1995 (2.3 times), this new species is characterized by its quite short caudal rami, about 2.5 times longer than wide. Moreover, this new species is very characteristic in bearing a spinule row on the proximal quarter of lateral margin of caudal rami, which brings to mind the empty position of caudal seta I. As far as we are aware, this structure has not been known yet in this genus.

Among the members of the species group with the combination of characters of 11-segmented antennule and a single apical spine on P4 enp-2, M. woni sp. nov. most resembles M. deserticus from a desert in northern Mexico in carrying a caudal seta III slightly longer than seta VI and an apical spine on P4 enp-2 slightly shorter than the segment (see Mercado-Salas et al., 2013). However, M. deserticus differs clearly from the new species, beside its elongate caudal rami (3.5-3.8 times as long as wide), by the shape of caudal rami (caudal seta II issuing from nearly halfway the lateral margin of ramus, against from posterior third of lateral margin in the new species) and smooth posterior margin of intercoxal sclerites of P1-P4. Metacyclops woni sp. nov. is also similar to M. denticulatus from Argentine in sharing cirrated posterior margins of urosomites and caudal seta III longer than seta VI (see Dussart and Frutos, 1986). However, it is distinguished from the new species by the apical spine on P4 enp-2 slightly longer than enp-2 (against slightly shorter than enp-2 in M. woni sp. nov.) and the dorsal caudal seta VII much longer than seta VI (against much shorter in M. woni sp. nov.).

In Asia, eight species of Metacyclops are currently recorded: M. malayicus from Sumatra, M. margaretae Lindberg, 1938 and M. communis from India (Lindberg, 1938), M. amoenus (Mann, 1940) and M. grandispinifer from Turkey (Mann, 1940; Lindberg, 1940), M. pectiniatus from Kwangtung, China (Shen and Tai, 1964) and from Malaysia (Fernando and Ponyi, 1981, as M. minutus; Lim and Fernando, 1985), M. minutus from Inner Mongolia, Pakistan and Syria (Tai and Chen, 1979), and M. ryukyuensis from Ryukyu Islands, Japan (Ishida, 1995). Among them, only M. margaretae displays the spine formula 3,3,3,3, and others do 3,4,4,3. The present new species is similar to M. pectiniatus in having the not-elongate caudal rami (less than 3 times as long as wide) with long caudal seta III (longer than setae VI and VII), however, M. pectiniatus is discernible from the new species by transverse rows of spinules on ventral surface of genital double somite, smooth posterior margins of urosomites and an elongate apical spine on P4 enp-2 (longer than enp-2, against slightly shorter in M. woni sp. nov.). Metacyclops minutus, which is distributed over wide area in Eurasia and Africa, evidently differs from the new species by elongate caudal rami (about 4 times), remarkably long apical spine on P4 enp-2 (more than 1.5 times as long as enp- 2), lack of medial basipodal seta of P1 and smooth posterior margins of urosomites (Tai and Chen, 1979). Metacyclops malayicus is easily distinguished from the new species by much shorter caudal rami (about 2 times) armed with seta VI longer than seta III. Metacyclops ryukyuensis, the only Japanese species, has very short caudal rami (2.3 times) similar to those of the new species, but differs from it by 12-segmented antennules and the caudal seta VI much longer than seta III (against vice versa in M. woni sp. nov.).