Journal of Astronomy and Space Sciences

Two mini neutron monitors are installed at Concordia research station (Dome C, Central Antarctica, , , 3,233 m.a.s.l.). The site has unique properties ideal for cosmic ray measurements, especially for the detection of solar energetic particles: very low cutoff rigidity < 0.01 GV, high elevation and poleward asymptotic acceptance cones pointing to geographical latitudes > . The instruments consist of a standard neutron monitor and a "bare" (lead-free) neutron monitor. The instrument operation started in mid-January 2015. The barometric correction coefficients were computed for the period from 1 February to 31 July 2015. Several interesting events, including two notable Forbush decreases on 17 March 2015 and 22 June 2015, and a solar particle event of 29 October 2015 were registered. The data sets are available at cosmicrays.oulu.fi and nmdb.eu.

A neutron monitor is a standard ground-based instrument providing continuous measurements of cosmic ray flux variations (Dorman 2004). The instrument is a counter designed to detect nucleonic components of cascades initiated by primary cosmic particles in the atmosphere (Simpson 1953; Hatton 1971). The location of a neutron monitor is very important because of the energy range and directions of accepted particles which depend on their rigidities. The Earth's magnetic field causes a shielding effect, when cosmic ray particles with a rigidity less than the threshold cannot reach the atmosphere at a particular geomagnetic latitude(Störmer 1950; Cooke et al. 1991; Smart & Shea 2009). The magnetic field affects the trajectories of charged particles in the magnetosphere leading to a specific set of acceptance cones, i.e., the directions from where the site receives particles with given rigidities (McCracken 1962; Rao et al. 1963). The thickness of the atmosphere above the site defines the strength of a cascade and the efficiency of the cosmic ray measurements. High-altitude instruments are more sensitive to low-energy cosmic rays than those at sea level.

A neutron monitor is an energy-integrating device and cannot directly measure the energy spectrum of primary particles, but it becomes possible with a network of such instruments situated at different geomagnetic latitudes. The network is also important for studies of cosmic ray anisotropy (Bieber & Evenson 1995; Mishev et al. 2014). Neutron monitors of the existing network have acceptance cones mostly in the equatorial regions, with hardly any sensitive to the polar directions.

Here we report a new cosmic ray station with two compact neutron monitors. It is hosted at Concordia research station (Antarctica) and significantly expands the capability of the present worldwide neutron monitor network.

2. THE SITE AND ITS SENSITIVITY TO COSMIC RAYS5

Two neutron monitors have been recently installed at Concordia research station located at Dome C on the Antarctic Plateau (75° 06' S, 123° 23' E, Fig. 1) at height of 3,233 Metres Above Sea Level (m.a.s.l.). The site has an almost zero rigidity cutoff (R < 0.01 GV), i.e., no geomagnetic shielding even for low-energy particles. The station at Dome C has several advantages over other cosmic ray stations in Antarctica that host neutron monitors. The thickness of the atmosphere above the site defines the efficiency and energy range of detection of cosmic rays (Dorman 2004). The high elevation of Dome C means that the new neutron monitors have enhanced sensitivity to low-energy cosmic rays, which is particularly important for studies of solar energetic particles. The majority of the other Antarctic stations are situated near the coast at low altitudes. (Fig. 1). The three stations at Dome C, at South Pole, and SANAE IV, have the highest sensitivity to low-energy particles due to their elevations (3,233 m, 2,835 m, and 856 m.a.s.l., respectively), with the first two being the most suitable for measurements of solar energetic particles. 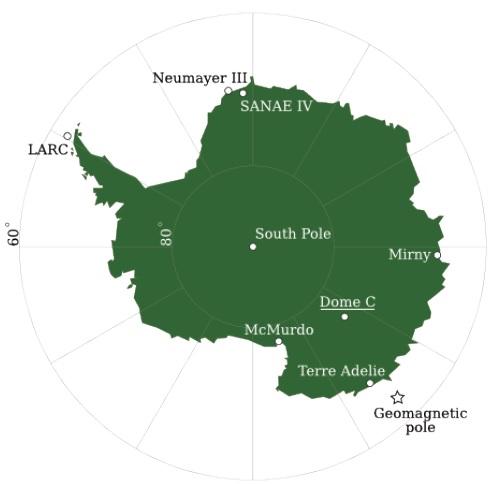 Fig. 2 shows the acceptance cones for several stations at high geomagnetic latitudes. The cones as well as the cutoff rigidities were computed using the Geant4 Monte-Carlo tool for simulations of cosmic ray transport and interactions with Earth, Mars and Mercury MAGNETOCOSMICS (Desorgher et al. 2005). Our computation was based on the International Geomagnetic Reference Field (IGRF, Macmillan et al. 2003) as the internal field, and the semiempirical model of the external geomagnetic field Tsyganenko-89 (Tsyganenko 1989), as validated by Kudela et al. (2008) and Nevalainen et al. (2013). We assumed quiet geomagnetic conditions with the index Kp = 1 and the epoch of 1 January 2010.

Although the South Pole and Dome C stations are located on the Antarctic Plateau, they have quite different asymptotic acceptance cones (Fig. 2). Dome C has the most poleward acceptance cone among all the stations: particles with rigidities between 1 and 20 GV are coming from latitudes between -75° and -90°. Other Antarctic stations, including South Pole, receive particles from a wider range of latitudes between -20° and -85°. Since less energetic cosmic rays are more numerous, most of the particles detected at those stations are coming from the equatorial plane, while Dome C has its cones almost totally polar-oriented even for the low-energy part of the spectrum.

A standard neutron monitor is designed as a counter surrounded with consecutive layers of a light-element material, usually polyethylene, and lead (Fig. 3), able to detect mostly secondary nucleonic components of a cosmic-ray-induced cascade (Simpson et al. 1953; Simpson 2000). The outer polyethylene reflector shields thermal nucleons and is transparent to cascade neutrons, which are multiplied in the lead producer. The inner polyethylene moderator slows nuclei down in order to enhance their registration probability. Finally, multiplied and decelerated neutrons reach a proportional counter where they are detected via a voltage pulse. A neutron monitor without a lead producer layer is termed "bare" or lead-free and has enhanced sensitivity to low-energy nuclei and consequently, to weaker cascades and softer primary particles, but at the cost of reduced total instrument efficiency (Vashenyuk et al. 2007).

Fig. 3.Schematic of the design of a standard neutron monitor.

The instruments installed at Concordia research station include a standard and a "bare" single-counter mini neutron monitors (Fig. 4) built by the North-West University (Potchefstroom, South Africa) and described by Krüger & Moraal (2013). Both devices are identical except for the lead producer that causes their different response. This setup can provide a rough spectral estimate of detected Ground Level Enhancements (GLE) caused by solar energetic particles (Mischke et al. 1973, Vashenyuk et al. 2007, Oh et al. 2012), whose spectra are difficult to reconstruct (Tylka & Lee 2006). 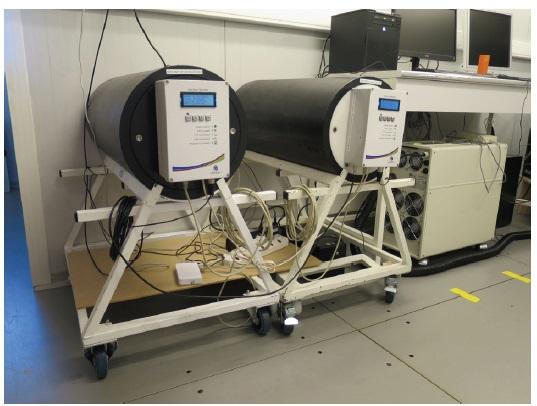 The instruments are relatively compact compared to a full-size NM64 neutron monitor (Carmichael 1968). Each of them has one BF3-filled counter LND2043 with a gas pressure of 933 hPa. Accordingly, such a counter has triple the efficiency (per unit area) as compared to a standard NM64 neutron monitor with a gas pressure of 300 hPa. As a result, the standard mini neutron monitor at Concordia has a count rate similar to a single NM64 detector (at sea level) while being only 1/3 of it in size and weight. The setup is located in the heated physics shelter at Concordia research station. The building is elevated above the surface at height of approximately 2 m, which significantly reduces the influence of the ice moderating effect on the count rate (Rühm et al. 2012; Cheminet et al. 2014). The neutron monitors are able to operate as independent units without an external computer. Nevertheless, in the present configuration they are connected to a local server, which stores the data files and sends them daily to a server in the Sodankylä Geophysical Observatory of the University of Oulu, Finland via the data transfer system Hermes.

According to the traditional short naming of cosmic ray stations, the standard-design neutron monitor and the "bare" one are designated as "DOMC" and "DOMB", respectively. Instrument operation was started in mid-January 2015. Fig. 5 shows the DOMC and DOMB count rates, as well as data from the Oulu neutron monitor 9NM64 used as a reference. The data is corrected for atmospheric pressure using the standard formula:

Fig. 5.Count rates of the standard-design neutron monitor at Dome C (DOMC, top panel), "bare" neutron monitor (DOMB, middle panel) and the Oulu neutron monitor (bottom panel). The values are corrected for atmospheric pressure and filtered with a rectangular 24 hour window. The 100% level corresponds to the maximum count rate for the time interval.

These are consistent with the barometric correction coefficients for other neutron monitors (e.g., -0.0074 mbar-1 for the neutron monitor in Oulu). The standard (DOMC) and "bare" (DOMB) mini neutron monitors have pressurecorrected count rates of approximately 16.5 and 4.3 counts/s on average, respectively. During the first 9 months of operation, two mid-size Forbush decreases were registered by the neutron monitors on 17 March 2015 and 23 June 2015. The Forbush decrease in March (Fig. 6) was observed as 8% drops in the DOMC and DOMB count rates, and 6% in the OULU count rate. Its recovery phase lasted approximately 8 days. The Forbush decrease in June (Fig. 7) was stronger and manifested itself as 12%, 14% and 10% decreases in the DOMC, DOMB, and OULU count rates, respectively. It had a classical two-step decrease shape and lasted for approximately 7 days. The "bare" instrument had a slightly stronger response to the events than the standard one as expected due to its higher sensitivity to strongly modulated low-energy particles during the events.

Two other interesting events were observed with the instruments at Dome C. At approximately 13:00 UT, 7 June 2015 there was an increase of the DOMC and DOMB count rates of approximately +6% which lasted 5 hours (Fig. 8). It was registered by several neutron monitors from the worldwide network, mostly situated in Antarctica, however the OULU instrument did not show a response. The nature of the event is not clear so far, and is still in discussion in the scientific community. At about 3:00 UT, 29 October 2015 the satellite system GOES registered an increase in the energetic (> 100 MeV) proton flux. This was a solar energetic particle event observed on the ground by the South Pole neutron monitors as well as the "bare" neutron monitor DOMB. The enhancement was small, barely distinguishable over the background and is still under discussion as to whether it was a GLE.

Two new mini neutron monitors, a standard-design and a "bare", disignated as “DOMC” and “DOMB” respectively, have been installed at high-altitude Concordia research station in Antarctica. The neutron monitors started their operation in mid-January 2015. Corresponding barometric correction coefficients have been derived. During the period of operation several interesting events, including two midsize Forbush decreases and two count rate enhancements, were registered, with both the instruments showing a good response. The data sets are available at cosmicrays.oulu.fi and nmdb.eu.

Supported by : Academy of Finland