Diabetes mellitus (DM) is one of the metabolic disorders associated with various diseases, including arteriosclerosis, nephritis, and hypertension (1, 2). The most common type of DM is Non-insulin dependent diabetes mellitus (NIDDM) (1, 2) ; it is widespread, a growing threat to global public health, and has the biggest impact on adults of working age in developing countries (3). Often DM is not recorded as the cause of death, but globally it was considered the fifth leading cause of death in 2000, after communicable diseases, cardiovascular disease, cancer, and injuries (4). In 2011, there were 366 million people with DM in the world, and this number is expected to rise to 552 million by 2030; approximately 80% of these people reside in developing countries (1). Extensive investigations into the pathogenesis of NIDDM have identified two endocrine defects functionally: insulin deficiency and insulin resistance (1, 2). In modern medicine, an effective cure for DM is unavailable (5). Thus, the research for more effective agents than others has continued. Many indigenous medicinal plants are useful in controlling DM successfully; some effective compounds were evaluated and found (6). The World Health Organization has recommended the analysis of the potential of plants as effective therapeutic agents (7).

Scutellaria baicalensis Georgi (Huang-qin) is a medicinal herb used to treat various types of inflammatory diseases, hepatitis, tumors, and diarrhea in East Asian countries such as China, Korea, Taiwan, and Japan (8). This plant contains many bioactive compounds including phenethyl alcohols, sterols, essential oils, and amino acids. Baicalin, baicalein, or wogonin is a single flavonoid isolated from Scutellaria baicalensis Georgi (9). The inhibitory activities of these flavonoids on vascular inflammation have been attributed to suppress LPS-induced pro-inflammatory responses, for example, the productions of nitric oxide and tumor necrosis factor-α, and nitric oxide synthase gene expressions (10, 11). However, the effects of baicalin, baicalein, or wogonin on high-glucose (HG)-induced inflammatory responses have not been reported. Therefore, in the current study, we attempted to determine whether baicalin these compounds can suppress the vascular inflammatory responses induced by HG in human endothelial cells and in mice.

Baicalin, baicalein, and wogonin are three structurally similar polyphenols, which are active compounds found in the Chinese herb Huang-qin. In this study, the effects of these polyphenols on HG-induced vascular inflammation were determined in vitro and in vivo.

Previous evidence has suggested that endothelial dysfunction and damage are precursors to vascular complications in DM (12). Hyperglycemia is the main precursor to all types of diabetic microvascular disease and may be involved in the pathogenesis of macrovascular complications as well (12-14). In addition, endothelial cell permeability is impaired, and may be increased, by the high concentrations of extracellular glucose in diabetes mellitus (15). Leakage of serum proteins, particularly albumin, through the endothelium is observed in the retinal vessels of early-stage diabetes mellitus (15, 16). Increased endothelial cell permeability in the larger vessels leads to the development of interstitial edema and may result in the enhancement of cell proliferation and matrix production (14). Therefore, we first investigated the effects of glucose on the albumin permeability of endothelial cells, as shown in Fig. 1A. Treatment with HG (25 and 50 mM) led to a rapid increase in endothelial cell permeability (Fig. 1A). This effect began 12 h after incubation and reached its maximum at 24 h (Fig. 1B). A significant increase was observed at a glucose concentration of 10 mM. Concentrations above 50 mM did not increase the HG-induced permeability further (data not shown). L-glucose and D-Mannose (25 mM), which were used as an osmotic control, had no significant effect on endothelial cell permeability (Fig. 1A). 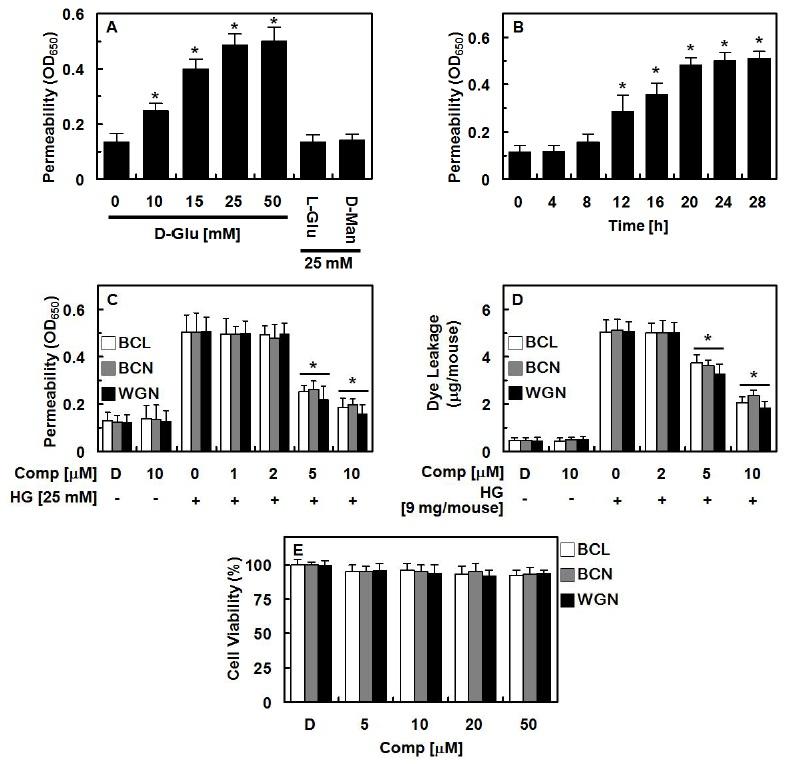 Two important phenomena that occur early in the pathology of atherosclerosis are the adhesion of leukocytes to the endothelial layers, followed by the migration into the inflammatory sites, and enhanced vascular permeability (15, 17). Enhanced interactions between leukocyte and endothelial cells have been demonstrated in in vivo and in vitro diabetes models (17, 18). NF-κB activation is the major controller in enhanced expressions of CAMs and migration of leukocytes through endothelium by HG (19, 20). In addition, it is well known that the upregulation of CAMs is involved in the pathology of atherosclerosis (21). The interactions between endothelium and leukocytes such as the adhesion and migrations of leukocytes, which is a precursor to atheroma (21). Particularly, upreluation of CAMs such as vascular cell adhesion molecule-1 (VCAM-1), intracellular adhesion molecule-1 (ICAM-1), and E-selectin has been observed in the endothelial cells of human atherosclerotic lesions (22). The expression of CAMs on endothelial cells by HG has been widely studied. It was reported that HG increased the expression of ICAM-1 in human aortic endothelial cells (23); this study is consistent with findings indicating that HG is a mediator of leukocyte adhesion toward endothelial cells, counting on the enhanced expressions of VCAM-1, ICAM-1, and E-selectin (20). Furthermore, the adhesion of leukocytes toward the endothelial cells is followed by their migration and differentiation into macrophages, which is controlled by an interaction between the monocytes and CAMs (24). Therefore, we evaluated the effects of HG on the expression of CAMs and adhesion of monocytes to HUVECs in response to HG. The HG concentration-based responses in the expression of CAMs, such as VCAM-1, ICAM-1, and E-selectin, were determined by enzyme-linked immunosorbent assay. Exposure of the primary cultured HUVECs to HG resulted in significantly increased expression of CAMs after incubation with 25 mM D-glucose; the maximum inhibitory effect of baicalin, baicalein, or wogonin (Fig. 2A) was observed at 10 μM. 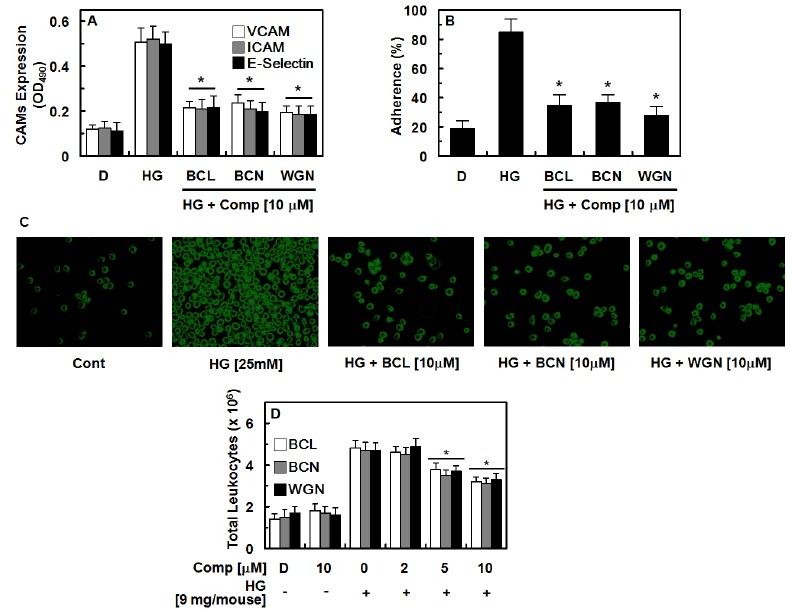 Fig. 2.Effects of polyphenols on HGmediated pro-inflammatory responses. HG-induced (25 mM, for 24 h) expression of cell adhesion molecules on HUVECs was determined after treatment of cells with the indicated concentrations of baicalin, baicalein and wogonin for 6 h. VCAM-1 (white bar), ICAM-1 (gray bar), and E-Selectin (black bar) were detected by ELISA. (B, C) HG-induced (25 mM, for 24 h)-mediated adherence of monocytes to HUVEC monolayers was assessed after pretreatment of cells with baicalin, baicalein and wogonin for 6 h. The amounts of adherent THP-1 cells were monitored by (B) cell-cell adhesion assay and (C) fluorescence microscopy. (D) The same as Fig. 1D except that the leukocyte migration into the peritoneal cavities of mice was analyzed. Data are expressed as the mean ± SEM of three independent experiments. *P ＜ 0.05 and *P ＜ 0.05 vs. HG alone.

And, to determine the effect of baicalin, baicalein, or wogonin on the interaction between endothelial cell and leukocyte, we tested the adhesion of THP-1 cells to HG-activated HUVECs and the migration of leukocytes in vivo. Adhesion of THP-1 cells to HUVECs was increased significantly with HG treatments. Pretreatment with baicalin, baicalein, or wogonin (10 μM) resulted in a decreased number of THP-1 cells adhering to HG-induced HUVECs (Fig. 2B and 2C). These results were corroborated in vivo by the inhibition of HG-induced migration of leukocytes in the peritoneal space (Fig. 2D). Thus, baicalin, baicalein, or wogonin could be a therapeutic drug candidate for diabetic vascular inflammation by targeting CAMs expression in the prevention of atherosclerotic lesions.

IL-8 and MCP-1 are chemokines strongly implicated in the atherogenesis processes (25). IL-8 funtions as a chemotactic for neutrophils and MCP-1 is a important mediator of monocyte trafficking (25). Therefore, we tested the hypothesis that baicalin, baicalein, and/or wogonin would inhibit HG-induced MCP-1 and IL-8 mRNA levels using real time reverse transcription polymerase chain reaction. As shown in Fig. 3A and 3B, HG induced an increase in the expression levels of MCP-1 (up to 5.2-fold) and IL-8 (up to 4.7-fold) mRNA; pretreatment with baicalin, baicalein, or wogonin resulted in decreased expression levels of HG-induced MCP-1 and IL-8 mRNA. These results suggested that baicalin, baicalein, or wogonin might be useful in preventing the diabetic inflammatory process. 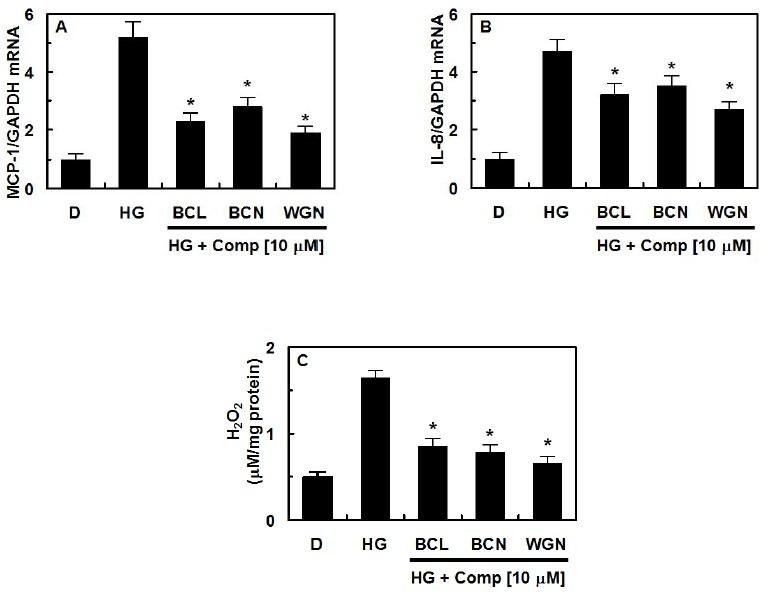 The synthesis of reactive oxygen species (ROS) is physiologically related with inflammatory responses (26). Previous observations have indicated that HG raises the oxidant stress and the synthesis of free radicals in various types of cells; ROS are the key mediator of various oxidative events such as extracellular matrix deposition and cell proliferation (27, 28). Therefore, to determine the cyto-protective effect of baicalin, baicalein, or wogonin on HG-induced oxidative stress, HG-induced cellular H2O2 concentrations were measured. H2O2 levels were statistically increased after incubation for 10 min with 25 mM glucose; the maximum concentrations were observed after 1 h incubation (data not shown). Therefore, 1 h incubation condition was chosen to analyze cellular ROS in further experiments. As shown in Fig. 3C, pretreatment with 10 μM baicalin, baicalein, or wogonin significantly inhibited HG-induced increase in H2O2 levels. In addition, baicalin, baicalein, or wogonin alone did not mediate oxidative stress (data not shown), which suggested the importance of HG-mediated oxidative stress on HUVECs in determining the characteristics of diabetic complications and vascular inflammation.

Effect of polyphenols on HG-induced activation of NF-κB

Activation NF-κB affects the uprelations of CAMs and induces interconnected activations of other pro-inflammatory chemoattractants and cytokines, which could provide the biological relationship between endothelial cell dysfunction and cell redox states (29). In addition, ROS activates various transcription factors in cultured endothelial cells, including NF-κB (30). First, we measured HG-induced translocation of NF-κB from the cytosol into the nucleus. NF-κB p65 proteins are the active subunits of the NF-κB complex. Increased levels of p65 proteins in the nuclear extracts of HUVECs treated with HG were shown using western blotting analysis, and the cytosolic extracts exhibited an appreciable loss of p65 protein content (Fig. 4A). And, treatment with baicalin, baicalein, or wogonin resulted in the inhibition of HG-induced increases in p65 NF-κB expression levels (Fig. 4A). To confirm the western blotting results, immunocytochemistry was applied using p65 NF-κB and FITC-conjugated antibodies. The results showed that HG increased the p65 NF-κB expression in the nucleus, whereas normal conditions did not. And, treatment with 10 μM baicalin, baicalein, or wogonin resulted in a decrease in the HG-induced expression of p65 NF-κB in the nucleus, which were consistent with those of western blotting (Fig. 4A); they demonstrated that the HG-mediated NF-κB activation was inhibited by baicalin, baicalein, and wogonin, indicating that baicalin, baicalein, or wogonin have inhibitory effects on the NF-κB pathways specific to HG-induced adhesion molecules on HUVECs. 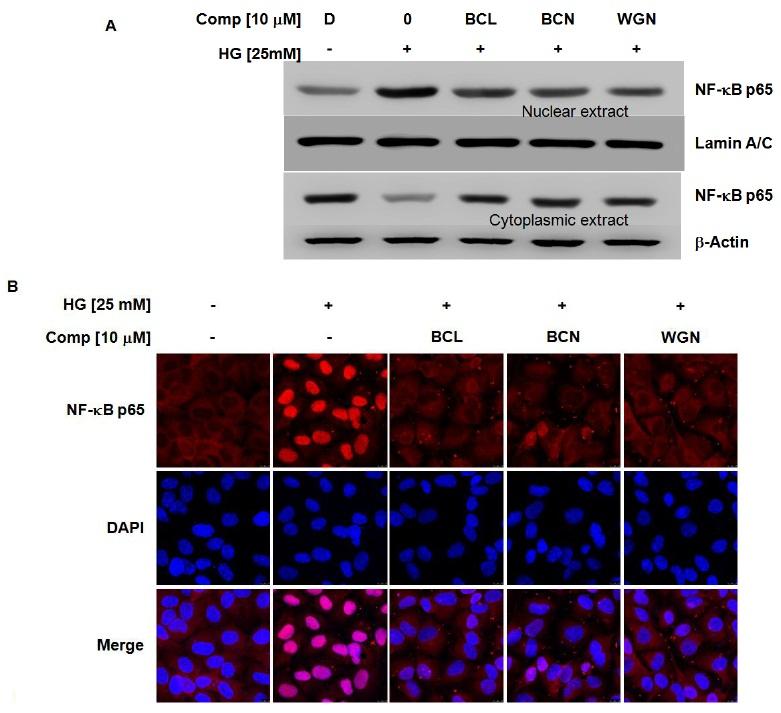 Fig. 4.Effects of polyphenols on HGinduced activation of NF-κB. Cells were pretreated with baicalin, baicalein and wogonin for 6 h and then stimulated with HG for 1 h. (A) The expression levels of NF-κB in nuclear extract or cytoplasmic extract were tested by western blotting. β-actin or lamin A/C was used as a loading control for cytoplasmic or nuclear extracts, respectively. (B) NF-κB 65 was visualized using rabbit anti-p65 monoclonal antibody (1:100), which only recognized NF-κB p65. Goat anti-rabbit antibody (1:100) conjugated to FITC was performed. The subcellular localization of NF-κB p65 was examined by immunofluorescence staining and visualized under an immunofluorescence microscope. The images are representative of results from three independent experiments.

Please see the supplementary materials for materials and methods.