In the present study, we addressed the question of whether treatment with mannitol, an osmotic diuretic, affects astrogliovascular responses to status epilepticus (SE). In saline-treated animals, astrocytes exhibited reactive astrogliosis in the CA1-3 regions 2-4 days after SE. In the mannitol-treated animals, a large astroglial empty zone was observed in the CA1 region 2 days after SE. This astroglial loss was unrelated to vasogenic edema formation. There was no difference in SE-induced neuronal loss between saline- and mannitol-treated animals. Furthermore, mannitol treatment did not affect astroglial loss and vasogenic edema formation in the dentate gyrus and the piriform cortex. These findings suggest that mannitol treatment induces selective astroglial loss in the CA1 region independent of vasogenic edema formation following SE. These findings support the hypothesis that the susceptibility of astrocytes to SE is most likely due to the distinctive heterogeneity of astrocytes independent of hemodynamics. [BMB Reports 2015; 48(9): 507-512]

The blood-brain barrier (BBB) maintains the brain microenvironment to ensure proper nervous system functions by segregating the systemic environment (1). The BBB is formed by the endothelial cells lining the blood vessels, astrocytic endfeet surrounding the blood vessels, and pericytes embedded in the basement membranes between the endothelial cells and the astrocytes. Astrocytes envelop > 99% of the BBB endothelium, and play an important role in inducing and maintaining BBB (1-5). BBB disruption leads to the development of various neurological diseases including epilepsy (2-4). BBB disruption is associated with endothelial damage and reduction in the number of astroglial endfeet attached to microvasular surfaces (5, 6).

Status epilepticus (SE), defined as prolonged seizure activity, causes vasogenic edema and astroglial loss (7-14). Although astrocytes are regarded as simple supporting cells with homogenous properties, SE-induced astroglial death shows regional specific patterns. Briefly, acute astroglial death is observed in the molecular layer of the dentate gyrus and the PC before or after neuronal death. In contrast, chronic astroglial death is detected in the CA1 region of the hippocampus. This susceptibility of astrocytes to SE is most likely due to the distinctive anatomical and physiological characteristics of astrocytes independent of hemodynamics (15).

Mannitol, one of the sugar alcohols, is clinically used as an osmotic diuretic to remove excess water from the extra- and intracellular space. In particular, mannitol treatment is the first drug of choice for the treatment of acute brain edema to prevent brain injury due to high intracranial osmotic pressure (4). However, the efficiency of mannitol as an anti-edema agent against vasogenic edema induced by SE is debated. Therefore, elucidating the effect of mannitol treatment on BBB disruption and astroglial loss induced by SE may be noteworthy to understand the pathophysiology of epilepsy. Furthermore, the astroglial response to mannitol may be indicative of the regional specific heterogeneity of astrocytes following SE. During the course of this study, we addressed the question of whether mannitol treatment affects the astroglio-vascular responses to SE.

In saline-treated animals, astrocytes showed typical reactive astrogliosis in the CA1-3 regions 2-4 days after SE. Astrocytic processes became unevenly thick and developed ragged edges during this period (Fig. 1). In these regions, there was no difference in the number of astrocytes compared to non-SE animals (Fig. 1). In the mannitol-treated animals, a large astroglial empty zone (0.4 ± 0.25 mm3) was observed in the stratum radiatum of the CA1 region 2 days after SE (Fig. 1). Three to four days after SE, the astrocyte-depleted zone in the stratum radiatum of the CA1 region was more pronounced (1.5 ± 0.17 and 1.9 ± 0.13 mm3, respectively), indicating disruption of the astrocyte network (Fig. 1). In addition, the cell bodies of astrocytes were shrunken around the astrocyte-depleted lesion compared to the saline-treated animals (Fig. 1). These findings indicate that mannitol may induce selective astroglial loss in the stratum radiatum of the CA1 region following SE. 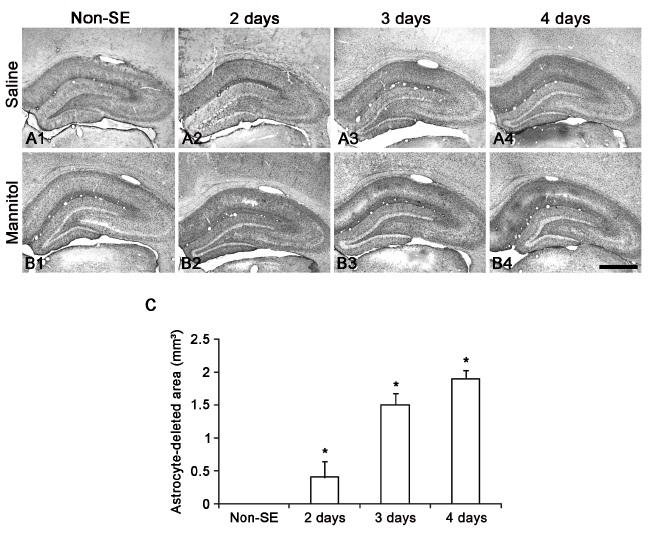 Fig. 1.The effect of mannitol treatment on SE-induced astroglial loss in the hippocampus. Compared to saline (A), mannitol induces a large astroglial empty zone in the stratum radiatum of the CA1 region following SE (B). Bar = 400 μm. (C) Quantitative analyses of the volume of astrocyte-depleted areas in the hippocampus following SE (mean ± SD). Significant differences from non-SE animals, *P < 0.05. 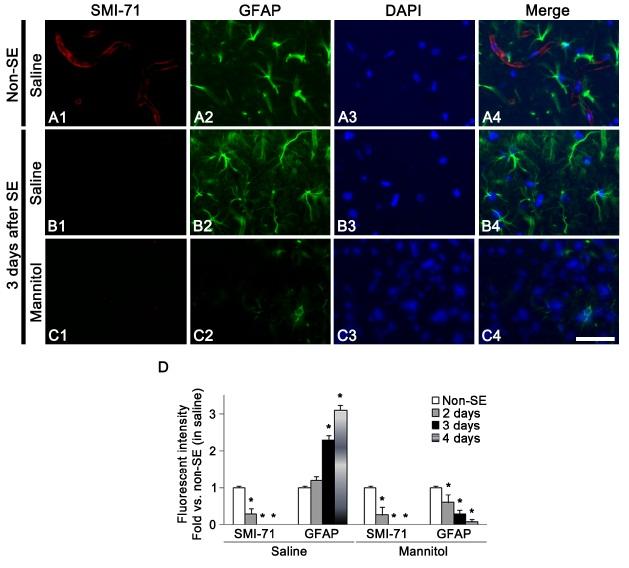 Fig. 2.The effect of mannitol treatment on SMI-71 and GFAP expression in the CA1 region following SE. Compared to saline (A), Three days after SE, SMI-71 expression gradually decreased in the CA1 region (B). Compared to saline (B), mannitol treatment results in astroglial loss in the CA1 region (C). However, mannitol does not affect loss of SMI-71 immunoreactivity following SE. Bar = 12.5 μm. (D) Quantitative values (mean ± S.E.M) of SMI-71 and GFAP fluorescent intensity in the hippocampus. Significant differences from non-SE animals, *P < 0.05. 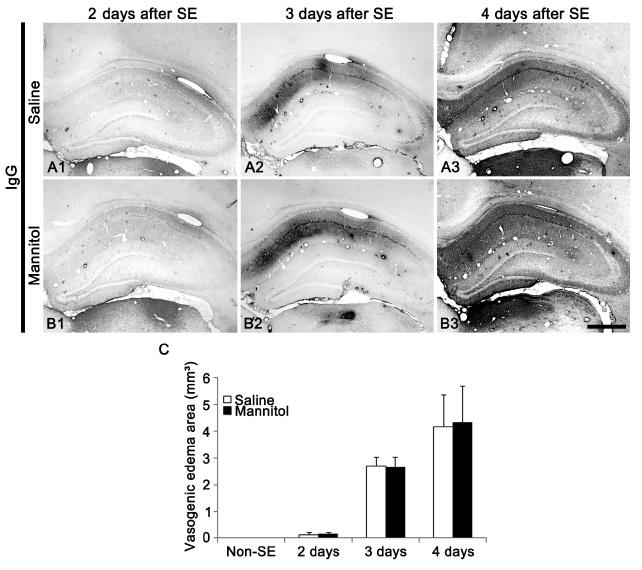 Mannitol treatment does not affect astroglial death in the dentate gyrus 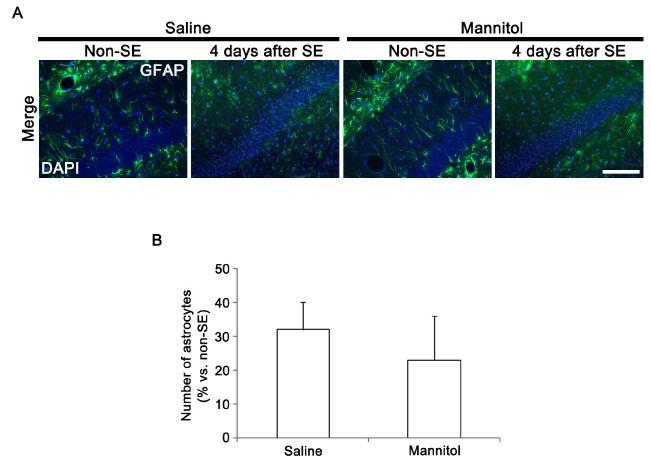 The major findings of the present study are that mannitol treatment induces selective astroglial loss in the CA1 region following SE, and that this astroglial death is not correlated to BBB disruption or vasogenic edema formation.

Classically, two major types of brain edema exist (16): cytotoxic edema and vasogenic edema. Cytotoxic edema is caused by intracellular water accumulation while the BBB remains intact (17). Astroglial swelling subsequently or simultaneously leads to dysfunction of astroglial membrane permeability and impairment of reuptake of excitatory neurotransmitters or ions by astrocytes (18). In contrast, vasogenic edema results from dysfunction of both endothelial cells and the BBB, followed by accumulation of water in the extracellular spaces (17). SE increases intracellular Na+ and Ca2+ concentrations in astrocytes and dysfunction of BBB, resulting in cytotoxic and vasogenic edema, respectively (19). In both edema types, hyperosmotic mannitol treatment is an effective treatment strategy that creates an osmotic gradient to dehydrate the brain structures (20-22). In a kainate model, mannitol effectively prevented SE-induced lesions by reducing cytotoxic edema (23,24). The present study demonstrates that mannitol treatment does not attenuate vasogenic edema formation in the PC and the hippocampus following SE. Consistent with the present data, some clinical studies reported that mannitol treatment fails to reduce vasogenic edema induced by diabetic ketoacidosis (25-28). Unexpectedly, the present study demonstrated that mannitol treatment induced selective astroglial death in the stratum radiatum in the CA1 region following SE, but did not affect SE-induced neuronal death in the hippocampus. In previous studies (9,10,12,13), SE results in slow autophagic astroglial death (clasmatodendrosis) in the CA1 region after 4-6 weeks. This astroglial damage involves extensive swelling and vacuolization of cell bodies as well as disintegrated and beaded processes. In the present study, damaged astrocytes in the CA1 region showed shrinkage of cell bodies, indicating a reversal of the osmotic concentration gradient between astrocytes and the extracellular space. Therefore, our findings indicate that astrocytes in the stratum radiatum of the CA1 region may be more vulnerable to mannitol-mediated hyperosmolarity than astrocytes in other regions.

In conclusion, to the best of our knowledge, the present study presents, for the first time, novel evidence that mannitol treatment induces selective astroglial death in the CA1 region. Furthermore, mannitol treatment is not effective for attenuating vasogenic edema and neuronal death induced by SE. Therefore, the present study provides evidence suggesting the regional specific heterogeneity of astrocytes, indicating that mannitol may be re-considered as an anti-edema agent for vasogenic edema-related neurological diseases.

Adult male Sprague-Dawley (SD) rats (7-week old) were used. All the experiments were in strict accordance with the recommendations in the Guide for the Care and Use of Laboratory Animals of the National Institutes of Health (NIH Publications No. 80-23, 1996) and were approved by the Committee on the Ethics of Animal Experiments of the Hallym University (Chunchon, South Korea, Permit Number: 2011-80 & 2012-62). All reagents were obtained from Sigma-Aldrich (St. Louis, MO, USA), except as noted.

At designated time points (Non-SE, 2 day, 3 days and 4days after SE, n = 7, respectively), animals were perfused transcardially with phosphate-buffered saline (PBS) followed by 4% paraformaldehyde in 0.1 M PB (pH 7.4) under urethane anesthesia (1.5 g/kg, i.p.). The brains were postfixed in the same fixative for 4 h and cryoprotected by immersion in 30% sucrose-PB at 4 ℃ for 2 days. The brains were frozen and sectioned coronally in serial 30 μm-thick sections. Sections were collected in six-well plates containing phosphate buffered saline (PBS).

The volume of anti-rat IgG positive region or astrocytes-deleted area was estimated according to a formula based on the modified Cavalieri method: V = Σa × tnom × 1/ssf: a, area of the region; tnom, the nominal section thickness (30 μm); ssf, the fraction of the sections (1/6 in this study). The subfield areas were delineated with a 2.5 × objective lens (8, 11, 14). An optical fractionator was used to estimate cell numbers. The number of each cell type (C) in each of the subregions was estimated as: C = ΣQ− × t/h × 1/asf × 1/ssf: Q−, the number of cells actually counted; Asf, (a(frame)/a(x, y step) {asf = (a(frame)/a(x, y step))}. Cell counts were performed by two different investigators blinded to the classification of tissues.

The fluorescence intensity was measured using a computer- assisted image analysis program (The University of Texas ImageTool program V. 3.0 and AxioVision Rel. 4.8 software). Based on the mean range of intensity values, each image was normalized by adjusting the black and white range of the image. Values for background staining were obtained from the corpus callosum. Optical density values were then corrected by subtracting the average values of background noise obtained from 15 image inputs.

Statistical comparisons were performed by Student t-test or one-way ANOVA test. Bonferroni's test was used for post-hoc comparisons. A P value below 0.05 was chosen as the threshold for significant differences (29).