The importance of circulating hormones in the aging process has been discussed in various reports (1). Clinical trials have used growth hormone (GH) to investigate the effects of the hormone in preventing the aging process and improving aging symptoms. Virtually all tissues in the human body are responsive to GH and GH-involved functions may be impaired by age-related downregulation of GH expression (2). Some studies have used GH secretagogues (GHS), peptide and non-peptide compounds that stimulate the secretion of GH, to modulate GH secretion (3). One of the most potent compounds, GH releasing peptide (GHRP)-6, stimulates GH release via a unique pathway independent of GH releasing hormone (GHRH) (4). Efforts to develop a small molecule with GH releasing activity, most of which were based on peptidomimetic approaches to GHRP-6, have resulted in a few preclinical candidate compounds (3,5).

The positive effects of GHS on skin, in part due to increased collagen synthesis, highlight the possible cosmetic application of GHRP-6 and its derivatives (1). However, insufficient stability of topical formulations and low bioavailability, due to low permeability of peptide compounds via the skin, make them impractical for topical application. Recently, we reported the use of a GHRP-6 derivative as a cosmetic ingredient. To improve the permeation of GHRP-6 through skin as well as to improve stability in the formulation, several GHRP-6 derivatives conjugated with biotin (vitamin B7) were synthesized and their effects on skin-derived cells were investigated. Significant increases in collagen synthesis were observed with select GHRP-6 biotin conjugate compounds. In addition to cosmetics, effects of GH on muscle formation through stimulation of collagen synthesis are also well-known. Studies have shown that certain genes involved in myocyte differentiation, such as myogenin, MRF4, and MEF2c, are regulated in part by GH (6). Based on these results, in this study, we investigated the effects of a GHRP-6-biotin conjugate compound on myocyte differentiation. We show here stimulation of myogenesis via application of a GHRP-6-biotin conjugate compound, as indicated by increased expression of myogenesis marker proteins and collagen synthesis. Further investigation into the underlying signaling pathways revealed the potential involvement structural proteins, such as desmin and actin.

To investigate the effects of the GHRP-6-biotin conjugate on the differentiation of cultured myoblasts, C2C12 cells were treated with 50 μM GHRP-6-biotin conjugate and expression of myogenic differentiation marker proteins, myosin heavy chain I (MyHC I), myogenin, MG53 (mitsugumin 53), and caveolin-3, were quantified by Western blotting (7). As shown in Figs. 1A and S1, treatment with the GHRP-6-biotin conjugate increased the expression of all measured proteins up to day 3. Furthermore, a dose-dependent increase in protein expression was also observed after 48 h of treatment (Figs. 1B, S2). As shown in Figs. 1C and S3, the nuclei number of MyHC-positive cells increased ∼3-fold in 3-day-differentiated myotubes and satellite cells. Treatment with biotin or GHRP-6 alone did not induce significant change in myogenesis, suggesting that the conjugated compound may stimulate signaling pathway(s) different from those that are affected by single-compound treatment (Fig. S4). Further investigations into the underlying pathways induced by single and conjugate compounds are currently underway. 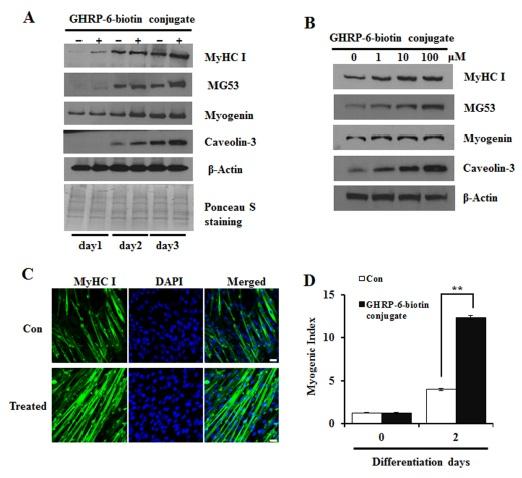 Fig. 1.Effects of a newly synthesized GHRP-6-biotin conjugate on C2C12 myocytes differentiation. (A) Confluent myoblasts were incubated for the indicated period of time with (＋) or without (−) 50 μM GHRP-6-biotin conjugates. Whole-cell lysate was analyzed by immunoblotting with anti-myosin heavy chain I (MyHC I), myogenin, MG53, and caveolin-3. β-Actin and Ponceau S staining were used as a loading control. (B) C2C12 myoblasts were differentiated for 48 h with the indicated concentrations of GHRP-6-biotin conjugates. Equally loading of protein was checked by comparison with β-actin. These experiments were performed independently three times. Myogenesis was monitored using MyHC I immunofluorescence and DAPI (C), the myogenic index (D). The myogenic index was determined by counting the number of the nuclei in MyHC I-positive cells. All data are presented as means ± SE. t-test. **P ＜ 0.01.

Prior studies have suggested a potential relationship between GHRP-6 and insulin-like growth factor-1 (IGF-1) (8). Thus, we next investigated the effects of the GHRP-6-biotin conjugate on IGF-1 expression. As shown in Fig. 2A, treatment with the GHRP-6-biotin conjugate compound increased IGF-1 expression in a dose-dependent manner up to 100 μM. However, biotin did not induce any significant changes at the concentrations tested and treatment with GHRP-6 downregulated the expression of IGF-I in cultured myoblast cells, consistent with the results in Fig. S4. 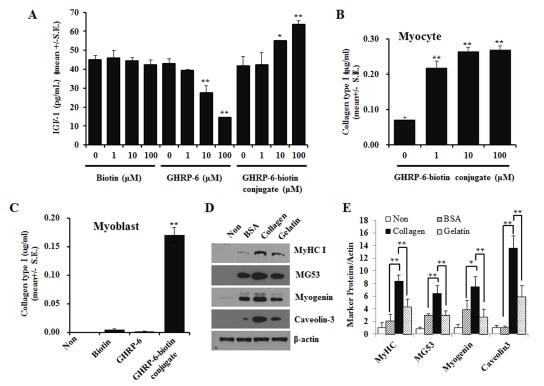 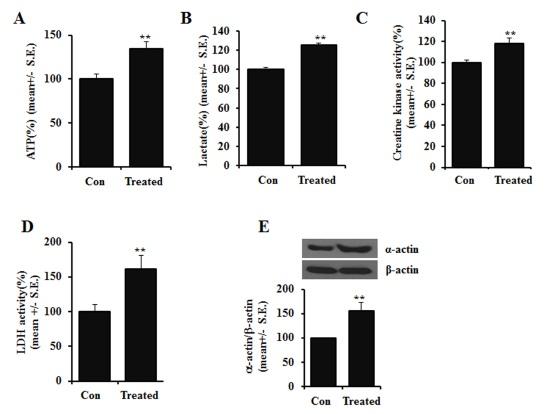 Identification of binding partners of the GHRP-6-biotin conjugate

To better understand the specificity of GHRP-6-biotin conjugate’s effects on myoblasts, we investigated the involvement of possible binding partners for the GHRP-6-biotin conjugate in myoblasts. To explore potential candidate proteins as binding partners, co-precipitated proteins were analyzed by MALDI-TOF. Our results identified desmin, actin, and zinc finger protein 691 as possible binding partners (Fig. 4, Table S1). While the important role of desmin and actin for forming the intermediate filaments between adjacent myofibrils and cytoskeleton are well accepted, the role of zinc finger protein 691 as a transcription factor is not yet known and needs further investigation. Quantitative enzyme-linked immunosorbent assays (ELISAs) revealed that the GHRP-6-biotin conjugate interacted directly with desmin in a dose-dependent manner (Fig. 4C). 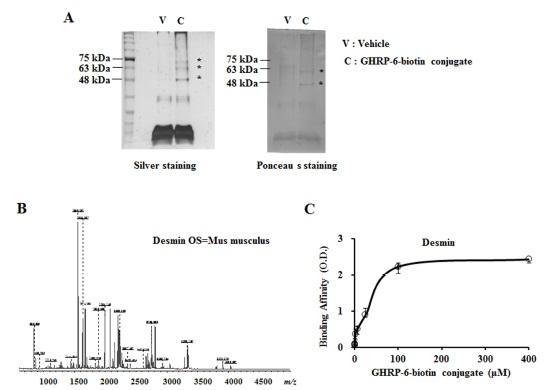 Since the discovery of the first potent growth hormone (GH)-releasing hexapeptide, GH releasing peptide (GHRP)-6, many studies have sought to develop more potent and less toxic GH secretagogues (3,9). Therapeutic benefits of GHRP-6 have been reported in various diseases, including type 1 diabetes (10), age-dependent cerebellar cell death (8), and acute myocardial infarction (11). Recently, the intranasal delivery of GHRPs has been introduced (12) and the development of topical formulations for peptides has also been reported (13).

Myogenic differentiation for muscle formation is a tightly regulated process, involving cell cycle withdrawal, fusion of myoblast cells into multinucleated myotubes and subsequent differentiation and expression of myogenic regulatory factors, including MyoD and Myf5 (14-16). Genes controlling myogenic differentiation are exquisitely regulated by hormones and growth factors (17). Among these growth factors, the insulin-like growth factors (IGFs) control myoblast proliferation, myogenic differentiation, and skeletal muscle hypertrophy (18). Previous studies have also suggested that systemic administration of GHRP-6 may increase expression of both IGF-1 mRNA and protein levels in various organs, including skeletal muscle, cardiac muscle, brain, and hypothalamus (19,20). GHRP-6 increased IGF-1 mRNA levels in the cerebellum of aged rats (8) and GHRP-6 also stimulated IGF-1 mRNA expression in RCA-6 cells (20). However, whether the effect of GHRPs in muscle differentiation and development is mediated through IGF-1 remains unclear. GHRP-6 did not affect plasma IGF-1 levels or IGF-1 mRNA levels in intact hearts and the myocardial IGF-1 mRNA level was not enhanced by GHRP-6 treatment (11). In this study, we showed that GHRP-6 downregulated the expression of IGF-1 in myoblasts and inhibited myocyte differentiation (Fig. S4). However, treatment with the GHRP-6-biotin conjugate induced myogenesis and increased IGF-1 expression, suggesting that conjugation of biotin with GHRP-6 changes the biological properties of GHRP-6. While further investigation is needed, a change in the anti-oxidant properties of GHRP-6 by conjugation with biotin may be responsible for the difference seen in IGF-1 expression inducing activity.

In this study, we showed that treatment with the GHRP-6-biotin conjugate stimulated myogenic differentiation. Furthermore, this differentiation was mediated by collagen synthesis through, at least in part, IGF-1-mediated signaling. However, both GHRP-6 and biotin, as non-conjugated forms, did not show IGF-1 stimulating activity. To explore binding molecules specific for GHRP-6-biotin conjugate compounds, MADLI-TOF analysis after coprecipitation was performed (Fig. 4). Among the proteins identified was desmin, a muscle-specific protein and a key subunit of the intermediate filament in cardiac, skeletal, and smooth muscle. It has been suggested that desmin plays a critical role in the maintenance of the structural and mechanical integrity of the contractile apparatus in muscle tissue (25). Skeletal muscle of desmin knockout mice shows higher susceptibility to mechanical injury (26) and inhibiting desmin protein expression via anti-sense RNA treatment resulted in a blockade of myotube formation in cultured myoblast C2C12 cells (27). In a skeletal muscle atrophy model, desmin is also a target molecule for muscle-specific ubiquitin ligase, Atrogin1, and tripartite motif (RING, B-box, coiled-coil)-containing Trim32 (28,29). These results suggest that the GHRP-6-biotin conjugate compound might prevent the degradation of desmin by ubiquitin ligases through direct binding. While further investigation is needed to clarify the role of the GHRP-6-biotin conjugate and its effects on myogenesis, our results suggest that the newly synthesized GHRP-6-biotin conjugate has stimulatory effects on myogenesis, at least in part, through up-regulating collagen type I and IGF-1 expression.

The mouse myoblast cell line C2C12 was obtained from the American Type Culture Collection (ATCC; Manassas, VA, USA) and cultured in Dulbecco’s modified Eagle’s medium (DMEM, Gibco, Invitrogen, Grand Island, NY, USA) supplemented with 1% penicillin/streptomycin and 10% FBS in a 5% CO2 incubator at 37 ℃ according to a previously described method (30). Briefly, C2C12 myoblasts at 90-100% confluency were differentiated into myotubes by growth medium with differentiation medium (DMEM supplemented with 1% penicillin/streptomycin and 2% horse serum). Every 48 h, the differentiation medium of the myotubes was replaced.

GHRP-6 was synthesized by Anygen Co., Ltd. (Gwangju, Korea) and biotin and other reagents used for the conjugation were purchased from Sigma-Aldrich. The GHRP-6-biotin conjugate compound was synthesized by a FMOC solid-phase peptide synthesis method using a glass reactor vessel. The reaction mixture was purified by reverse-phase high-performance liquid chromatography (HPLC) using a Vydac Everest C18 column. Elution was carried out with a water-acetonitrile linear gradient (10-75% (v/v) acetonitrile) containing 0.1% (v/v) trifluoroacetic acid. The molecular weight of the purified compound was confirmed by LC/MS.

To measure protein expression and enzyme activity in vitro, C2C12 myoblast cells were treated with test compounds in differentiation media for 24 h. The expressions of IGF-1 and collagen 1 in the culture medium were measured using an IGF-1 ELISA kit (Abcam, Cambridge, MA, USA) and a collagen type I ELISA kit (Chondrex Inc., Redmond, WA, USA), respectively, according to the manufacturers’ instructions. For measuring the energy-metabolism related enzyme activities and metabolites, cell were incubated with serum-free medium containing test samples for 16 h. After washing with ice-cold PBS three times, cells were collected and lysed with assay buffer. Cell lysates were centrifuged (12,000 g, 10 min). The supernatant was collected and creatine kinase (CK) and lactate dehydrogenase (LDH) activities were measured by appropriate activity assay kits (Abcam), after filtering the supernatant with a 10kDa spin column (Abcam). ATP and lactate concentrations in the supernatant were also measured using an ATP assay kit and a lactate assay kit (Abcam), respectively.

Western blotting was performed as described previously (31). Briefly, the proteins in the whole cell lysates were separated on SDS-polyacrylamide gels and transferred to a PVDF membrane. The antigens were visualized by sequential treatment with specific primary antibodies, HRP-conjugated secondary antibodies, and an enhanced chemiluminescence substrate kit (Thermo Scientific).

For silver staining, C2C12 cells were incubated with test compound for 1 h at 37 ℃ and washed three times with icecold PBS. Then, cells were treated with the cross-linker, DSS (Thermo Scientific) for 15 min and washed twice with PBS (pH 8.0). Whole cell lysates (500 μg) were incubated with streptavidin-agarose beads for 18 h at 4 ℃. The precipitates were resolved by SDS-PAGE and the analytical gels were stained using the PlusOne silver staining kit (Thermo Scientific) according to the manufacturer’s protocol.

Briefly, desmin protein in C2C12 cell lysates was captured by protein-specific antibodies (Antibodies Online, Atlanta, GA, USA) and then the GHRP-6-biotin conjugate was added in a dose-dependent manner. The bound complex was detected with avidin-conjugated HRP and a colorimetric reaction.