The microbial distribution of raw materials and beef jerky, and the effect of nisin on the growth of Bacillus cereus inoculated in beef jerky during storage, were studied. Five strains of pathogenic B. cereus were detected in beef jerky, and identified with 99.8% agreement using API CHB 50 kit. To evaluate the effect of nisin, beef jerky was inoculated with approximately 3 Log CFU/g of B. cereus mixed culture and nisin (100 IU/g and 500 IU/g). During the storage of beef jerky without nisin, the number of mesophilic bacteria and B. cereus increased unlikely for beef jerky with nisin. B. cereus started to grow after 3 d in 100 IU nisin/g treatment, and after 21 d in 500 IU nisin/g treatment. The results suggest that nisin could be an effective approach to extend the shelf-life, and improve the microbial safety of beef jerky, during storage.

From 2000 to 2008, the social cost of food-borne illness in the USA amounted to $9.4 million annually. Bacillus cereus, Clostridium perfringens, or Staphylococcus aureus was charged $1.3 million (Scallan et al., 2011). In these pathogens, B. cereus is a common food contaminant, and is an etiological agent of two distinct forms of illness, i.e., emetic and diarrheal. B. cereus is found in meats, milk, vegetables, and some B. cereus are able to grow at 5 or 7℃, acid condition, and heating by sporulation (Dufrenne et al., 1994; Simpson et al., 1994; van Netten et al., 1990). B. cereus is not dangerous in low level (< 106 CFU/g), however B. cereus can multiply to dangerous levels in subsequent time and temperature. The counts of B. cereus were reported to be 2.9-4.59 Log CFU/g in meat products and B. cereus grow well after cooking (Tewari et al., 2015). Therefore, B. cereus in food must be controlled by heat treatment, radiation, and antimicrobials

Nisin is the most commercial bacteriocin produced by Lactococcus lactis subsp. lactis, which exhibits antimicrobial activity against a wide range of Gram-positive vegetative cells and spores. Nisin have been used for just processed cheese in Korea (Ministry of Food and Drug Safety). Bacteriocin has already been used in more than 50 countries in the food industry as an antagonistic additive (Ray, 1992). In addition, nisin has been permitted in processed meat include limits of 12.5 mg/kg in USA (Food and Drug Association), and has mainly been applied to dairy and meat products as a target of Gram positive pathogen (mainly Listeria monocytogenes) (Balciunas et al., 2013). Meanwhile, B. cereus has been investigated in beef gravy, fruit beverage, and cooked chilled foods (Assous et al., 2012; Beuchat et al., 1997; Choma et al., 2000).

There are limited data in the literature describing microbial distribution, particularly pathogens in jerky. However, the hurdle of L. monocytogenes, Salmonella Typhimurium, and Salmonella enterica was studied in jerky for its safety (Boles et al., 2007; Calicioglu et al., 2003; Yoon et al., 2009). Therefore, the purposes of this study were to determine microbial contamination status of the raw materials used for beef jerky, and beef jerky itself, and the antimicrobial effect of nisin on the growth of B. cereus inoculated in beef jerky during storage.

Each sample (25 g) was taken aseptically using a sterile stomacher bag containing 225 mL of 0.1% sterile peptone water, and macerated for 2 min. Decimal serial dilution in 0.1% peptone water was prepared. The number of mesophilic bacteria counts were determined using plate count agar (PCA, Difco Laboratories, USA), at 37℃ for 48 h. B. cereus numbers were determined using cereus selective agar (Merck, Germany), at 30℃ for 24 h. Microbial colonies were counted, and expressed as log colony forming units per gram (Log CFU/g). Pathogenic microorganisms of each sample were isolated, and identified as described in Table 1.

Table 1.Conditions for the isolation, growth, and identification of pathogenic bacteria in raw meats

Preparation of B. cereus strains and addition to beef jerky

B. cereus strains isolated in raw meat, spices, and spiced meat were used for hurdle technology. B. cereus was grown on PCA (Difco) overnight at 30℃, and then left at ambient temperature for one week, to sporulate. When spores were detected microscopically, spore suspensions were created in sterile 0.1% peptone water, and heat treated (80℃ for 10 min) to kill vegetative cells. Spores were enumerated by viable counts, and the suspensions were adjusted to 106 spore/mL. Mixed inocula were prepared, by combining spore suspensions in equal concentrations. Spores were inoculated to the beef jerky, to give a predicted level of 103 CFU/g.

Preparation of nisin and addition to beef jerky

Nisin (Sigma-Aldrich, USA) was used as a form of stock solution. A standard stock solution of nisin containing 1×105 IU/mL was prepared, by dissolving 100 mg of nisin in 0.02 M HCl (1 mL), and adding 9 mL of distilled water. Nisin was added at concentrations of 100 IU/g and 500 IU/g, respectively to the beef jerky.

Package and storage of beef jerky

A coextruded, multilayered film (C5045, nylon/PE/nylon/PE/nylon/LLDPE, Cryovac Division, Sealed Air Corporation, USA) was used for packaging and the pouches were heat-sealed under vacuum. Beef jerky samples were then stored at room temperature (25℃) for 60 d, and samples were taken at regular intervals throughout the storage period for quality measurements.

The pathogens most frequently associated with raw meats are E. coli O157:H7, B. cereus, Salmonella spp., L. monocytogenes, and S. aureus (Edison et al., 2000; Kim et al., 2008b). For the determination of microbial contamination, the incidences of pathogenic bacteria in raw meat, spices, spiced meats, and jerky products are summarized in Table 2. Five strains of B. cereus were isolated from raw meat, spices, and spiced meat, while no pathogens were detected in the final products. In addition, no other pathogens were detected. These results may be a drying process using dehydrator. 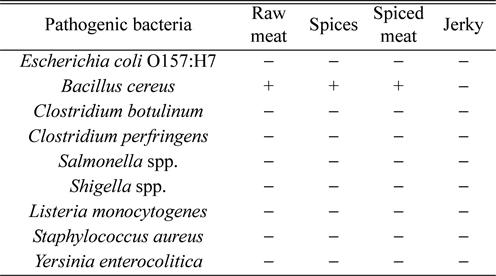 Five isolated strains using cereus selective agar were Gram positive, rod shaped, spore forming bacteria, and catalase-positive. These strains did not grow on Simmon’s citrate, produced NO2, and need to take arginine for growth. Therefore, these isolates were identified as B. cereus by ATB automated identification system, with 99.8% identity. 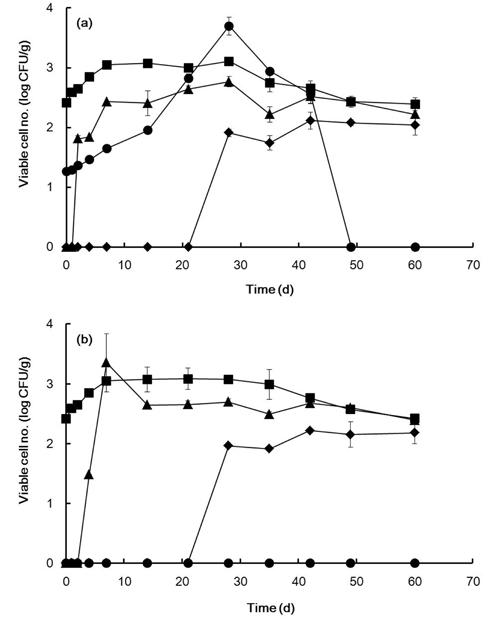 The inactivation of nisin is known by the presence of proteolytic enzymes produced by B. cereus (Beuchat et al., 1997). In control samples (without inoculated B. cereus and nisin), no major changes in B. cereus growth during storage were observed. The remaining of the number of B. cereus in beef jerky without nisin may be depend on low water activity of jerky. Nisin was reported as biopreservative against B. cereus in cook-chill foods of soybean sprout, cooked rice, and milk (Kim et al., 2008a; Penna et al., 2002; Vessoni et al., 2002). In addition, nisin was applied as incorporating film against B. cereus (Alrabadi, 2012).

In conclusion, the incidences of pathogenic bacteria in raw meat, spices, spiced meats, and jerky products were studied. Just five strains of B. cereus were isolated from raw meat, spices, and spiced meat, while no pathogens were detected in the final products. The effect of nisin on the growth of B. cereus inoculated in beef jerky during storage was demonstrated. The addition of nisin can decrease the initial cell count of mesophilic bacteria and B. cereus in beef jerky. The results suggest that nisin could be an effective approach to extend the shelf life, and improve the microbial safety of beef jerky, during storage.