Vegetable oil is free of cholesterol and has a higher ratio of unsaturated to saturated fatty acids than animal fat (Choi et al., 2010). However, vegetable oils alone do not seem technologically suitable for simple replacement use, due to their differing physical properties. Thus, the incorporation of vegetable oils with dietary fiber in meat products to replace animal fat has been attempted and may have positive effects on consumer health (Choi et al., 2013).

Emulsion mapping is an important and useful methodology for modeling and analyzing meat product characteristics. Mapping techniques have been used for many different purposes such as identifying sensory drivers of linking, finding the best product composition, and as a method of product optimization. The vital advantage of mapping techniques is that they are simple to use and interpret and thus provide non-statisticians with useful information (Endrizzi et al., 2014). Furthermore, the mapping results can be used to propose a new useful approach based on permutation testing (Morrison et al., 2011). This mapping information can be important in research and development activities after (Hopfer and Heymann, 2013). An improved understanding of the determinants of meat products in general is important developing in interventions aimed at specifically altering product properties. Therefore, it is vital to understand the interrelationships between emulsion stability and cooking yields, apparent viscosity, and hardness because of their relationship to the ultimate quality of emulsion meat products.

The objective of this study was to evaluate emulsion mapping systems in replacing animal fat with various levels of vegetable oils and dietary fiber extracted from brown rice by studying the relationship among emulsion stability, cooking yield, apparent viscosity, and the hardness of reduced-fat meat emulsions.

BRF was prepared from brown rice bran using the method of Park et al. (2009). Fresh rice bran, containing 12- 16% moisture, was obtained from a polishing plant in China. The rice bran was pelletized into a 2-10 mm size using a pellet-forming machine. The rice bran pellets were dried until the moisture content was < 10%. Hexane (2-5 fold by weight) was added and circulative lipid-extraction was conducted until the residual oil content in the rice bran was 3%. De-fatted rice bran was obtained by removing the residual hexane at a temperature < 60℃. To the de-fatted rice bran, 8-40 fold of water by weight was added, and the mixture was stirred with shaking for 30-60 min to uniformly disperse the particles in the mixture. Subsequently, 3 N NaOH was slowly added to the mixture at 20-30℃ to adjust the pH to 8-10, and protein was extracted for 30-60 min. The resulting protein solution was centrifuged at more than 5,000 g and ambient temperature. The precipitate was dried, crushed, sieved, roasted, cooled, pulverized, and sieved to prepare the BRF. The roasting and pulverization processes were performed to increase the microbiological safety and sensory preference during the food application.

Preparation of a pork emulsion system

Fresh pork (M. biceps femoris, M. semitendinosus, M. semimembranosus, moisture, 71.97%; fat, 4.96%; protein, 15.82%) and pork back fat (moisture, 12.61%; fat, 85.64%) were purchased from a local processor at 48 h postmortem. All subcutaneous and intramuscular fat and visible connective tissue were removed from the fresh ham muscle. Lean meat and pork back fat were ground through an 8-mm plate. The ground tissues were vacuum-packaged (FJ-500XL, Fujee Tech, Korea) and stored at 0℃ until required for product manufacture. Suitable amounts of muscle and fat were tempered at 4℃ for 24 h prior to meat batter preparation. Four commercial vegetable oils - canola oil, olive oil, grape seed oil, and soybean oil - were assessed to replace pork fat obtained from a local market. All vegetable oils were pre-emulsified on the day of use, according to the method of Choi et al. (2010). The first meat emulsion batter was the control, prepared with 30% pork back fat. The others meat emulsion systems were produced to the experimental design; the compositions are given in Table 1. Each batch of samples consisted of emulsion systems differing in composition with respect to the pork back fat, vegetable oil, and BRF level added. Pork meat was homogenized and emulsified for 1 min in a silent cutter (Cutter Nr-963009, Hermann Scharfen GmbH & Co, Germany). Nitrite pickled salt (NPS) (1.5%), sodium tripolyphosphate (0.5%), ascorbic acid (0.02%), monosodium L-glutamate (0.06%), and bratwurst spice (0.6%) were added to the meat emulsion batters, which had been previously dissolved in water and chilled (2℃) and then mixed for 1 min. BRF was added to the samples and the batters were emulsified for 6 min. A temperature probe (Kane-May, KM330, UK) was used to monitor the emulsion temperature, which was maintained at < 10℃ throughout batter preparation. After emulsification, the meat batter was stuffed into collagen casings (#240, NIPPI Inc., Japan; approximate diameter of 25 mm) using a stuffer (Stuffer IS-8, Sirman, Italy). The meat batter samples were then heated to 75±2℃ for 30 min in a water bath (Model 10-101, Dae Han Co, Korea). The cooked meat batter was cooled with cold water (15℃). The emulsion system was then placed in polyethylene bags, vacuum-packaged using a vacuum packaging system, and maintained at < 10℃ during preparation. This procedure was performed in triplicate for each emulsion systems (each using 10 kg frankfurters). All analyses were conducted in triplicate for each formulation.

Duplicate fat free dry was analyzed for total dietary fiber using the method of Lee et al. (1992). The method includes enzymatic hydrolysis with -amylase, protease, and amyloglucosidase, using the Mes-Tris buffer. Triplicate of approximately 1 g samples were suspended in 40 mL Mes-Tris buffer, and submitted to an enzymatic hydrolysis sequence: 50 mL of thermo-resistant -amylase, a water bath for 35 min, and 100 ìL of protease in water bath at 60℃ for 30 min. After that, the pH was corrected to the range of 4.0-4.7, and in water bath at 60℃ for 30 min, 300 µL amyloglucosidase was added. Finally, the fiber was precipitated with 95% ethanol at 60℃. The sample was filtered in fritted glass crucibles, with glass wool as a filtration agent. The crucibles containing the residue were dried in a 105℃ dry oven, cooled in a dessicator, and weighed.

The emulsion systems were analyzed for emulsion stability using the method of Bloukas and Honikel (1992) with the following modifications. At the middle of a 15 mesh sieve, pre-weighed graduated glass tubes (Pyrex Chojalab Co., Korea, volume: 15 mL, graduated units: 0.2 mL) were filled with emulsion batter. The glass tubes were closed and heated for 30 min in a boiling water bath to a core temperature of 75±1℃. After cooling to 4±1℃, water and fat separated in each graduated glass tube were measured and emulsion stability was calculated as given below (Choi et al., 2007).

The meat batters were weighed before heat processing and after cooling at 15℃ for 2 h. The cooking yield was determined from their weights and expressed as a percentage of the initial weight.

Emulsion system viscosity was measured in triplicate with a rotational viscometer (HAKKE Viscotester 500, Thermo Electron Corp., Germany) set at 10 rpm. The standard cylnder sensor (SV-2) was positioned in a 25 mL metal cup filled with batter and allowed to rotate under a constant share rate at s−1 for 60 s before each reading was taken. Apparent viscosity values in centipoises were obtained (Shand, 2000).

Average values of the emulsion stability, cooking yields, apparent viscosity and hardness were compared by the correlations between pairs of variables were calculated as Pearson’s correlation coefficients. The statistical analyses were done in the Analyst application within the SAS system statistical software 9.2 (SAS Institute, USA). 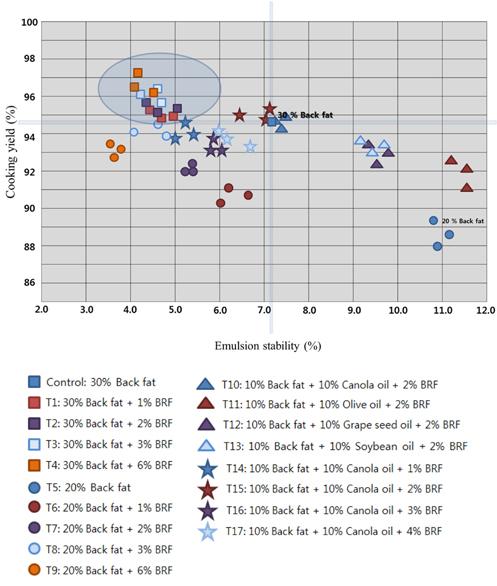 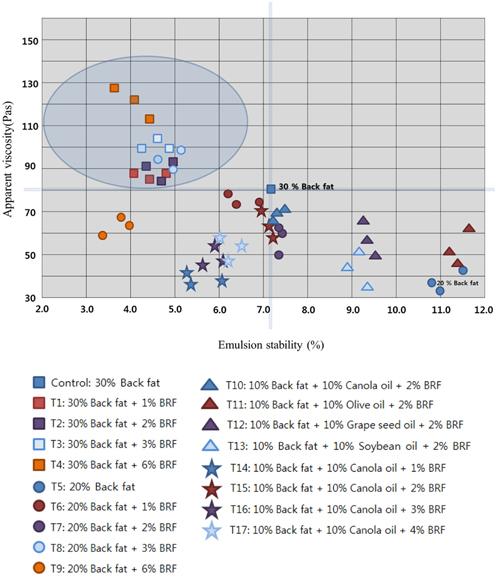 The emulsion mapping between emulsion stability and hardness of the meat emulsion systems with various lipid types (animal fat and/or vegetable oil) and BRF levels is presented in Fig. 3. Compared with the control, with 30% back fat, higher emulsion stability and lower hardness were seen with T5, T11, and T13. Treatment with BRF resulted in higher hardness than treatments (control and T5) with only back fat added, except T11 and T13. This result was similar to that of Tobin et al. (2013), which indicated that fat level of emulsion meat products was positively correlated with hardness. These findings also agree with those reported by Choi et al. (2013) who showed the effects of replacing pork back fat with vegetable oil and dietary fiber on textural properties of meat emulsion systems. The results indicated that hardness increased significantly by replacing half the animal fat with vegetable oil and adding dietary fiber. Other studies have indicated that emulsion meat products with added dietary fiber have increased hardness, because of their greater binding ability and water holding capacity (Choi et al., 2009; Eim et al., 2008; Lee et al., 2008; Saricoban et al., 2008). According to Choi et al. (2013), depending on the amount and types of fat, the results have been reported as to their influence on hardness. These results are in agreement with the current study. Accordingly, the present study suggests that the required formulations of finished emulsion meat products may result in the desired hardness and emulsion stability. 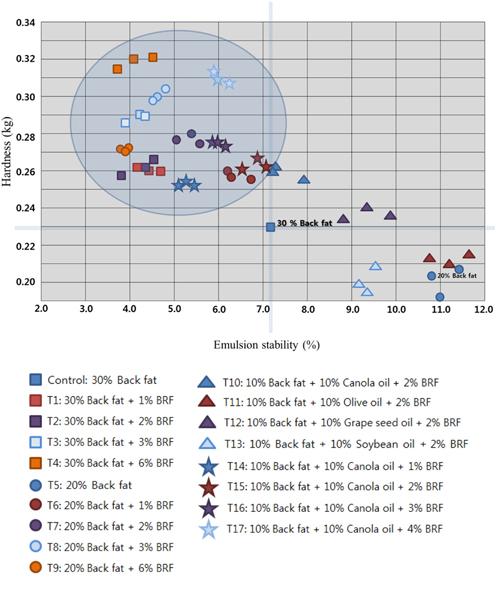 In brief, it can be concluded that the effects of fat concentration, BRF level, and lipid types showed relationship with emulsion stability and cooking yields, apparent viscosity, and hardness. Emulsion mapping results showed that reduced-fat meat emulsion systems with 20% back fat and 3% BRF has the most desirable quality characteristics, except for treatments with 30% fat concentration (including the control). With the addition of vegetable oil, the treatment, with 10% back fat, 10% canola oil, and 2% BRF was most similar to the control with 30% pork back fat. These results suggest that emulsion mapping is useful for assessing the quality of emulsified meat products while replacing pork back fat with incorporated vegetable oil and BRF. To improve the quality characteristics of meat emulsion systems with various added lipid types and BRF, more studies are necessary regarding the addition of other ingredients incorporated in meat emulsion systems.