This paper presents partial discharge localization in stator winding of generators using multi-conductor transmission line (MTL) and RLC ladder network models. The high-voltage (HV) winding of a 6kV/250kW generator has been modeled by MATLAB software. The simulation results of the MTL and the RLC ladder network models have been evaluated with the measurements results in the frequency domain by applying of the Pearson’s correlation coefficients. Two PD generated calibrator signals in kHz and MHz frequency range were injected into different points of generator winding and the signals simulated/measured at the both ends of the winding. For partial discharge localization in stator winding of generators is necessary to calculate the frequency spectrum of the PD current signals and then estimate the poles of the system from the calculated frequency spectrum. Finally, the location of PD can be estimated. This theory applied for the above generator and the simulation/measured results show the good correlation for PD Location for RLC ladder network and MTL models in the frequency range of kHz (10kHz<f<1MHz) and MHz (1MHz<f<5MHz) respectively.

Generators are considered to be one of the essential and costly equipment’s of power system. Identifying insulation faults in the best possible time prevents the appearance of irreparable damages. Partial discharge (PD) is one of the most important insulation faults. The first step in the study of partial discharge is precise modeling of transformer winding in high frequencies. In this paper two detailed RLC ladder network and MTL Models have been applied for partial discharge studies. The validity of frequency rang of this two models are different. The fundamental elements of the ladder network model are the lumped R, L and C elements and the frequency limitation for the validity of this model is in the range of a few hundred kHz. The fundamental elements of MTL model are distributed parameters. The model accuracy will be expanded over MHz frequency range. The published works on the machines is more focused on the RLC ladder network model in past [1-6]. While the published works on MTL modeling is mostly concentrated on modeling of electrical rotating machines and also on only the homogenous transformer windings ignoring the frequency dependency of the winding insulation parameters [7-12]. This paper compares the two well-known MTL and RLC ladder network models and used these models for PD studies in high frequency range 10kHz

MTL theory deals with a network of N conductors coupled all together, characterized by its inductance matrix [L], and capacitance matrix [C]. In the MTL model, windings parameters are considered as distributed parameter and winding behavior is described by transmission line equations. MTL model for turns of one coil is depicted in the Fig. 1 [13]. 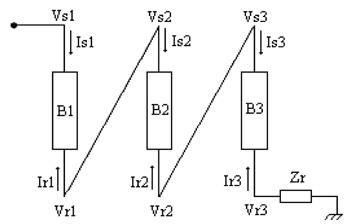 For developing the model a single turn is considered as the basic element of analysis. Fig. 1 shows an electrical machine winding with three turns in series connection. In this figure, Zr is the impedance for representing the terminal conditions, short and open circuit. The voltage Vs1 is the surge at the beginning of the winding.

Surge impedances and coefficient of propagation can be estimated of the following Eqs. [7-10].

The first and second terms in the (2) are representing the skin effect and the dielectric losses respectively. σ, μ and d are the conductivity, permeability and the winding coils gap respectively. The details of modeling and the parameters estimation for an inhomogeneous winding (realizing frequency dependent parameters) are discussed in [10].

According to the Fig. 1 we have these telegraphs equations:

in Eqs. (3) and (4), Vt and It are the voltage and current vectors. The order is equal to the number of turns in a coil. L and C are square matrices of the inductances and capacitances in the coil while Eo and Co denotes the excitation function and capacitance from one turn to the static plate. To study the PD phenomena the excitation function don’t exist so in the (4):

Eqs. (6) and (7) are 2n equation and contain 2n undefined parameters (Ai and Bi). By using the terminal conditions we have:

2n−2 equations are available. For two other equation can be simulated by a capacitance CB connected at the line-end. Then,

if the neutral end is at earth potential,

If a PD current pulse I PD is injected into the kth turn of the winding, (8) is modified when i=k−1:

With applying Eqs. (8) to (11) in Eqs. (6) and (7), the coefficients Ai and Bi have been calculated and then the current due to PD pulse can be calculated in the generator terminals.

Hence, if the line-end voltage, the neutral-end current and the PD current are known all other voltages and currents can be calculated.

A PD generated within a generator winding can have an associated frequency range between a few kHz to hundreds MHz Fig. 2 shows an RLC ladder network model [3].

The PD occurrence can be simulated as a current pulse injected into the network. To obtain the output current through the neutral point in such a circuit, it is very convenient to use state-space equations as follows:

Note that the position of 1 in vector K is decided by the input position. L, Θ and G are the inductance, capacitance and admittance matrices of this system. The frequency response can be calculated by taking the Laplace transform of Eq. (14).

with regard to the unit distribution for the PD current source, the frequency spectrum of the system can be evaluated according the bellow equation:

Based on the above theory, for the PD current detection and PD location, the three bellow steps will be down:

Step 1 can be calculated easily through the use of a fast Fourier transform (FFT). The second step can be estimated from the transfer function of the winding model as following: [14-16]

where α (S ) and β (S ) are polynomials and defined by bellow:

After obtaining the coefficients, the poles of the system can be estimated from the roots of polynomial α (S ) . The third Step is a nonlinear optimization problem. The objective function is to minimize the difference between the eigenvalues of matrix A and the calculated pole. The eigenvalues and pole frequencies to be arranged in descending ascending

Finally, with the poles of the system, the location of the PD can be estimated

In this section the winding of generator has been modeled once using MTL and next with RLC ladder networks. Then the fast transient over-voltages have been computed between turns. The analysis was carried out for a 6 kV/250 kW test generator. Table 1 and 2 show the generator specification and coil parameters. At this paper the coil parameters have been evaluated from two methods, the first by using the COMSOL software and the geometry and custom shape of coils with FEM methodology and the second by measuring the parameters using conventional methods in the laboratory.

Table 1.Specification of the under the test generator

Table 2.Parameters of the generator coils 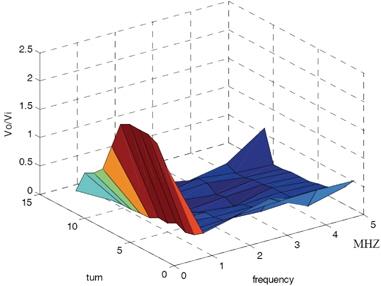 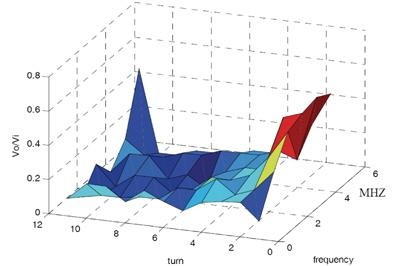 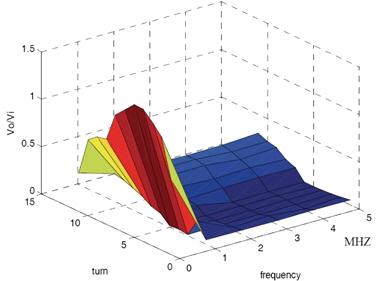 where Um is the measured value of variable and Us is its simulated value. r could be a number between 1 and −1. A positive value of r means a positive linear relationship; a negative value of r means a negative linear relationship. The correlation is ideal as approaches 1 and it is not desirable to approach −1[17]. Considering the measurement results shown in Fig. 4 and using SAS software to compute the correlation coefficient, the accuracy of the MTL and RLC ladder network model can be studied. Tables 3 and 4 show these coefficients for the RLC ladder network model and the MTL model simulations for respectively. These coefficients are the best means for evaluation of the models. Considering the last row of Table 3 it is obvious that the RLC ladder network model can present the best results for the frequency range of 10 kHz < f < 1MHz. The last row of Table 4 indicates that the MTL model can represent the response of generator better than next model for the frequency range of 1MHz 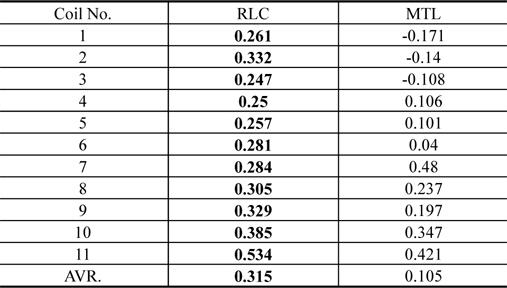 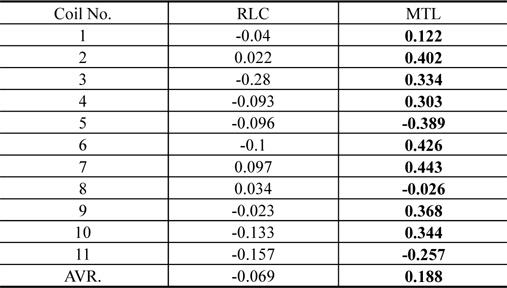 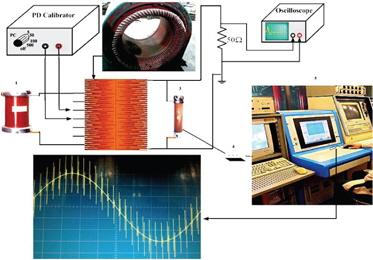 Fig. 6.PD pulse measured in circuit in a laboratory 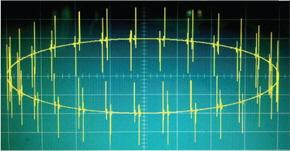 Fig. 7.The PD pulses measured in the kHz range (the PD has been injected in node 6) 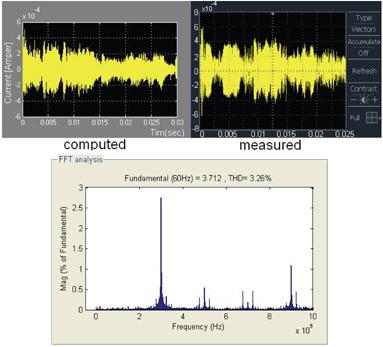 Fig. 8.The comparison of current and the spectrum (PD has been injected in node 1 for RLC ladder network model) 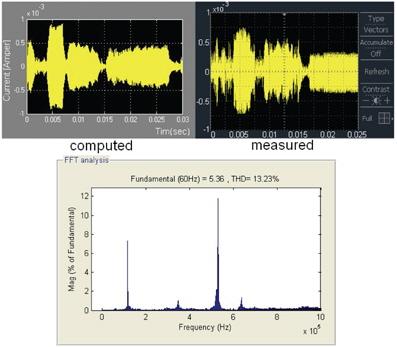 Fig. 9.The comparison of current and the spectrum (PD has been injected in node 6 for RLC ladder network model) 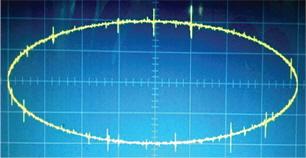 Fig.10.The PD pulses measured in the MHz range (the PD has been injected in node 6) 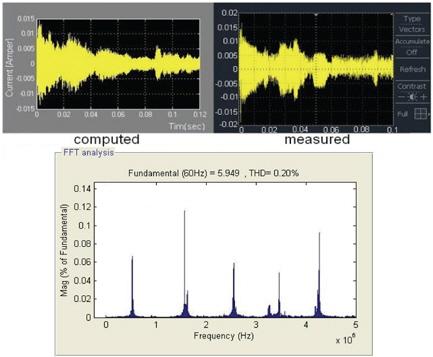 Fig. 11.The comparison of current and the spectrum (PD has been injected in node 1 for MTL model) 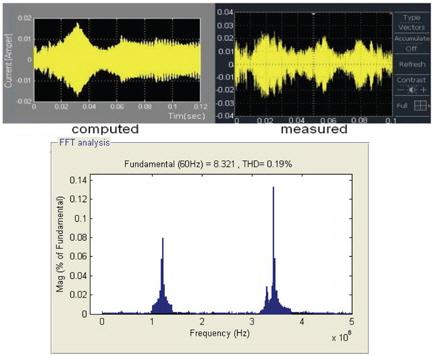 Fig. 12.The comparison of current and the spectrum (PD has been injected in node 6 for MTL model)

In this section from the frequency spectrum of the current signals, and poles estimate of the system, the location of PD can be estimated along the winding. Then these results compared with real position. Table 5 shows the comparison between the real position and the simulated estimated position of PD (Depending to the node).

Table 5.Comparison between real position and the simulation estimated position of PD

This paper compared the measurement and simulation results of transient over voltages and then partial discharge localization in the windings of a 6kV/250kW generator. Voltages along the generator windings were simulated by applying MTL and RLC ladder network theory. The results of the transients voltage calculated in the coils of the winding were compared with laboratory measurement. A relatively good correlation observed between measurement and RLC Ladder Network model simulation results for the frequency range of 10kHz < f < 1MHz. However in the range of the frequency 1MHz < f < 5MHz, the MTL model, provides a better agreement between the simulated and the measured voltages.

An algorithm for partial discharge localization has been developed in this paper. The approach is based upon frequency spectrum analysis of PD current signals. PD pulses have been injected by the PD calibrator in the different part of the winding. Then the PD signals measured or simulate in the end of the winding. These PD signals have been generated in kHz and MHz frequency range that used for RLC ladder network and MTL models respectively. A relatively good correlation have been observed between measurement and RLC ladder network model simulation results for the frequency range of kHz (10kHz < f < 1MHz), however in the frequency range of MHz (1MHz < f < 5MHz), the MTL model have been provided the better agreement between the simulated and the measured for PD Location.