Recently, the consumption of dietary supplements has increased because of people’s greater interest in health. Unfortunately, the sales of dietary supplements containing unauthorized substances such as drugs have also increased. We developed a rapid, accurate method for the simultaneous determination of antihistamines using liquid chromatography tandem mass spectrometry with a multiple reaction monitoring mode. The limit of detection (LOD) and limit of quantification (LOQ) of the instrument used in this method were in the ranges 0.0003-0.3 and 0.0009-0.6 µg mL−1, respectively. The linearity of the method was > 0.99. The precision levels of the method were 0.1-9.8% (intra-day) and 0.3-9.6% (inter-day), and the levels of accuracy of the method were 82.7-115.0% (intra-day) and 84.3-113.0% (inter-day). The mean of recovery of the method was in the range of 83.9-117.9% and the RSD of the stability was less than 5.9%.

Histamine, a low-molecular-weight amine, is a natural body constituent. Histamine is synthesized from l-histidine by histidine decarboxylase and involved in neurotransmission, allergic inflammation, and immune modulation. Histamine exerts its effects through the interaction with one of the four distinct receptors (H1, H2, H3, and H4). The manifestation of receptors is changed depending on the level of cell differentiation and microenvironmental influences.1 Histamine exhibits proinflammatory activity and is relevant to the development of diverse aspects of antigen-specific immune response by the H1 receptor.2-3,5 H1 antihistamines are used in the treatment of allergic disorder, allergic rhinoconjunctivitis, and urticaria.4,6 H1 antihistamines directly inhibit the action of histamine through H1 receptors on antiallergic inflammation in blood vessels and nerve cells. Moreover, antiallergic activities such as the anti-inflammatory functions of mast cells and basophils probably exert a direct inhibitory effect on calcium ion channel and NF-kB.5,7 H1 antihistamines are classified into alkylamines, piperazines, piperidines, ethanolamines, ethylenediamines, and phenothiazines according to the chemical structures or functional groups, which is determined by the permeability of the blood–brain barrier for classification as the first-or second-generation histamines.5 There are large differences between the two H1 antihistamine generations in terms of their propensity to cause the side effects of central nervous system (CNS). The first-generation H1 antihistamines penetrate well into the CNS where they induce sedation. In contrast, the second-generation H1 antihistamines allow much reduced CNS sedation.6,8 According to the United States Food and Drug Administration-approved product labelling, potential side effects associated with first-generation antihistamines include cardiotoxicity, drowsiness, and cognitive impairment.24

Because of the growing interest in health and nutrition, the sale of dietary supplements steadily increases every year. Unfortunately, the adulteration of food ingredients and dietary supplements with various types of drugs is a concern, risking human health in long term. Liang et al. 23 reported that promethazine as adulterant was found in herbal medicine and food supplements, these products were declared having the effect of tranquilization or improving ‘health status’ of old people. The consumption of these adulterated products which contain chemical drugs could be harmful to consumers with various health risks. For this reason, more accurate and effective method is needed for rapid determination of adulteration such as antihistamines in foods or dietary supplements.

In this paper, we report a rapid and accurate method for the simultaneous determination of the concentrations of antihistamines in various types of dietary supplements that were intentionally adulterated with antihistamines by LC–MS/MS.

We purchased different types of dietary supplements such as powders, capsules, tablets, liquids, and pills from the South Korean markets for method validation. Each sample was homogenized, and 1 g of the sample was placed in a 20 mL volumetric flask. Then, the sample was extracted with methanol by sonication for 10 min. Finally, the extract was filtered through a 0.22-µm PVDF filter (Millipore, Milford, MA, USA) before the injection for analysis.

The MS/MS optimization was performed by the direct infusion of each individual standard solution. Precursor ion discovery (PID) and LC-MS/MS scans were carried out using ESI operated in positive mode. The protonated molecular ion and two or three fragment ions were selected as the precursor and product ions, respectively. The instrument parameters such as collision energy, cone voltage, desolvation temperature, and capillary voltage were tuned to obtain the optimal intensity of product ion. The optimized MRM conditions are shown in Table 1. To optimize the separation of 20 antihistamine compounds, various compositions of mobile phase with different buffers such as ammonium acetate and formic acid were used. 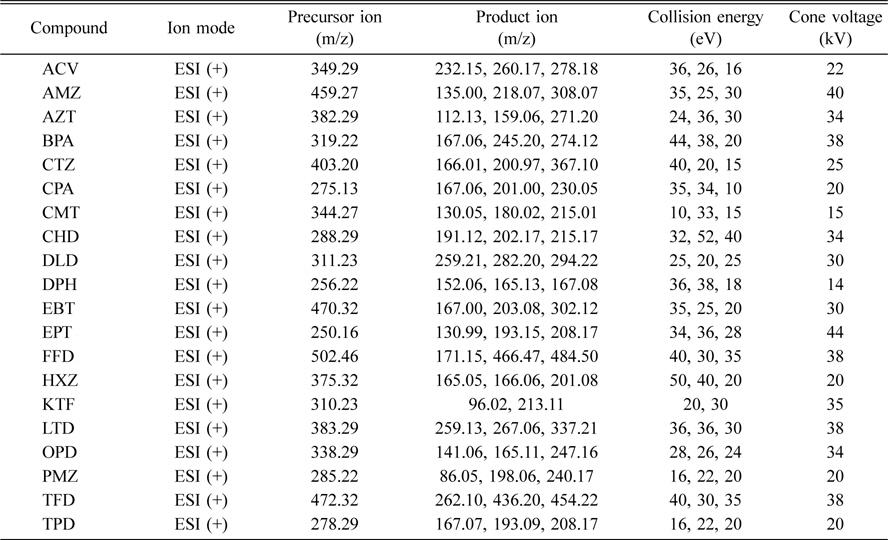 The mobile phase without any buffer showed low peak intensity. Moreover, a broad peak shape and tailing were observed when ammonium acetate buffer was used, while the use of formic acid showed a good peak intensity and separation. When an Acquity UPLC BEH C18 column was used, the compounds could be effectively separated in terms of peak shape and intensity compared to those obtained using BEH C8 (1.7 µm, 2.1 × 100 mm, Waters, Milford, MA, USA) and HSS T3 column (1.8 µm, 2.1 × 100 mm, Waters, Milford, MA, USA). Therefore, the BEH C18 column was selected because it showed the best separation of the 20 antihistamine compounds. The LC–MS/MS chromatograms of the 20 antihistamine compounds are shown in Fig. 1. 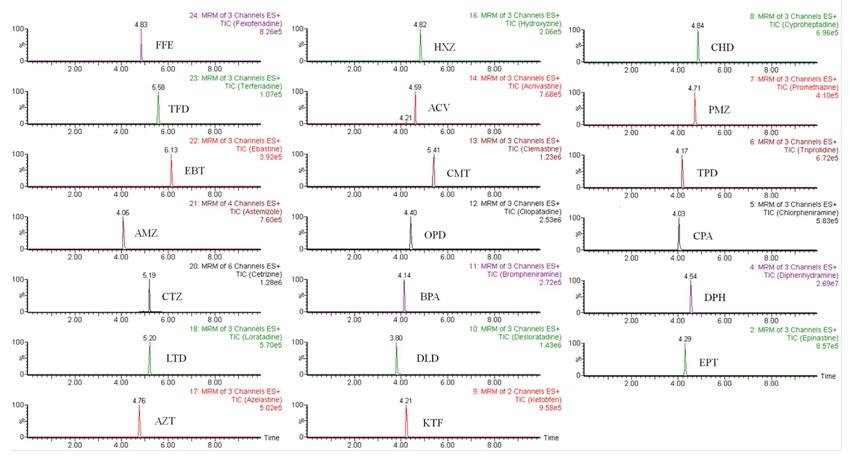 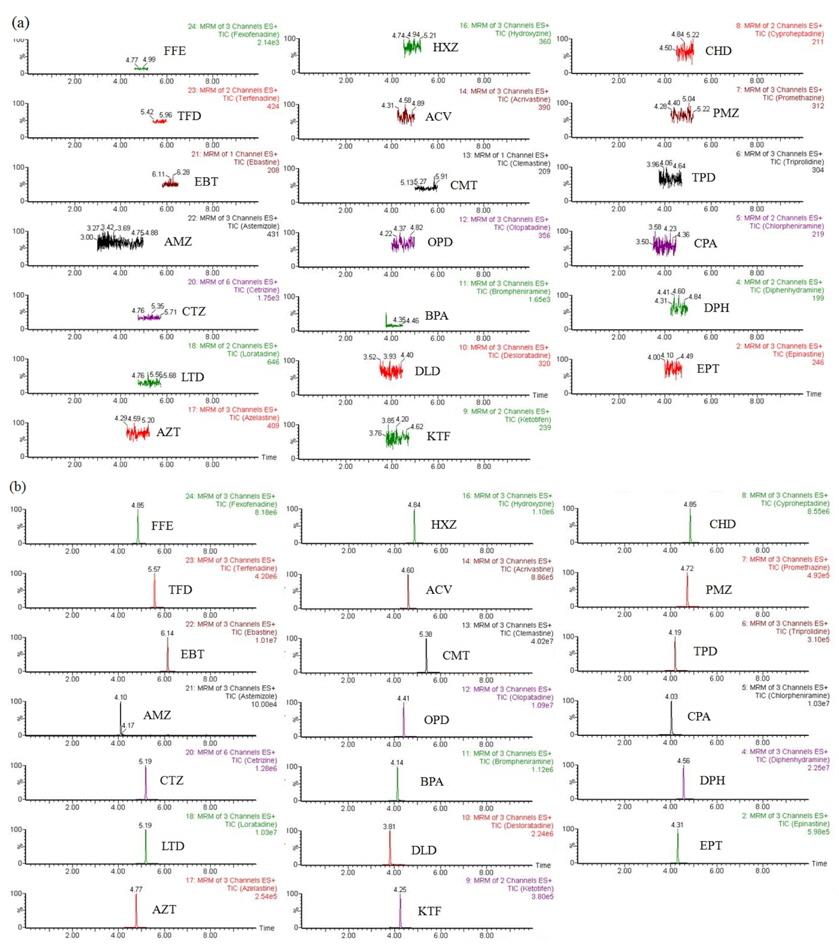 3.2.2. Limit of detection (LOD) and limit of quantification (LOQ) and linearity 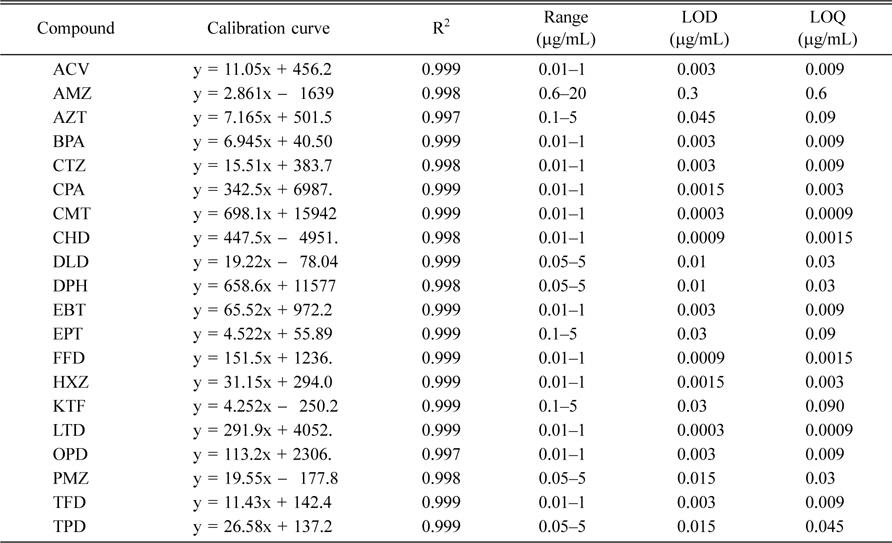 Table 3.a)RSD is defined as the standard deviation of a group of values divided by their mean 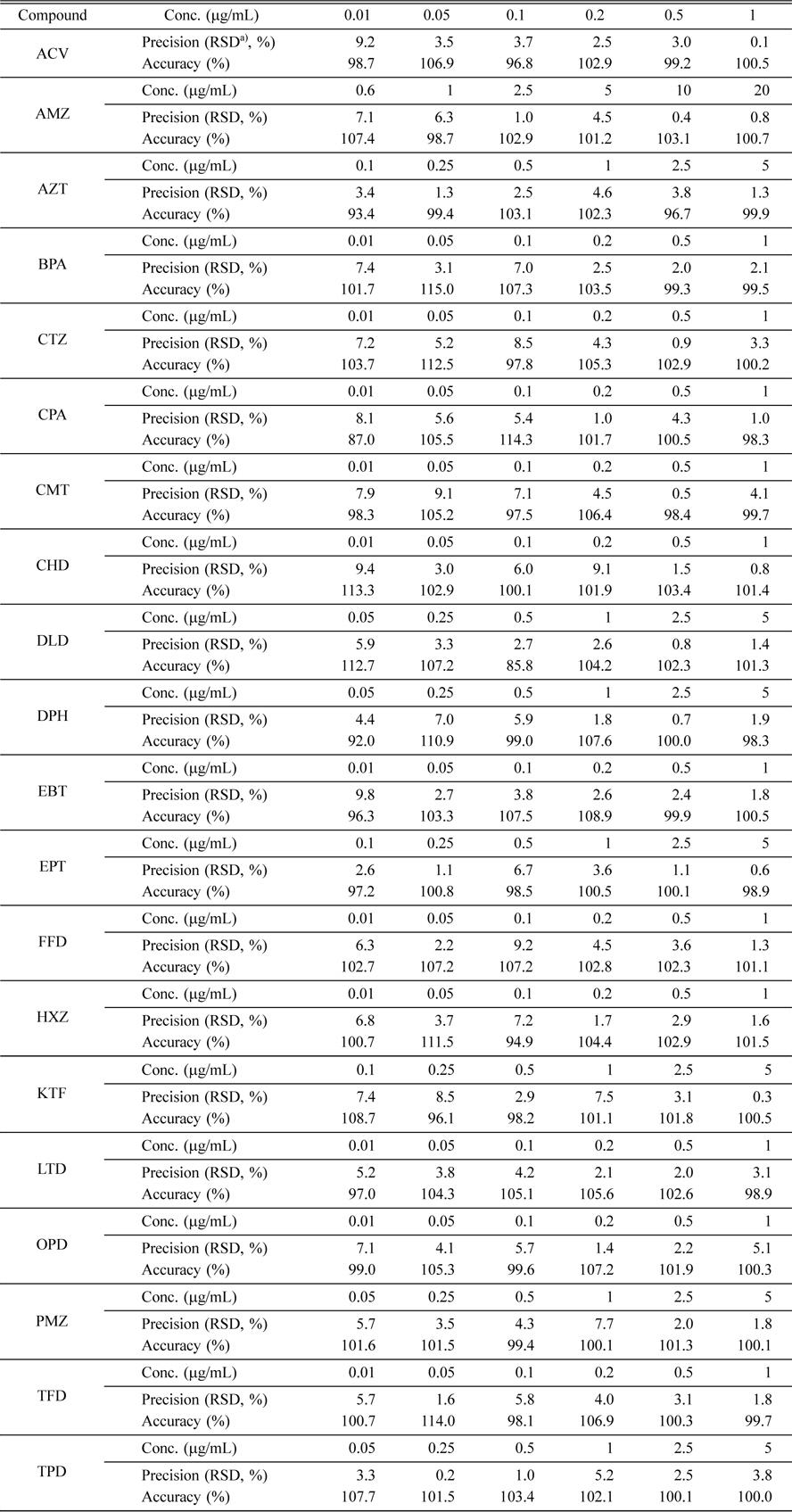 Table 4.a)RSD is defined as the standard deviation of a group of values divided by their mean 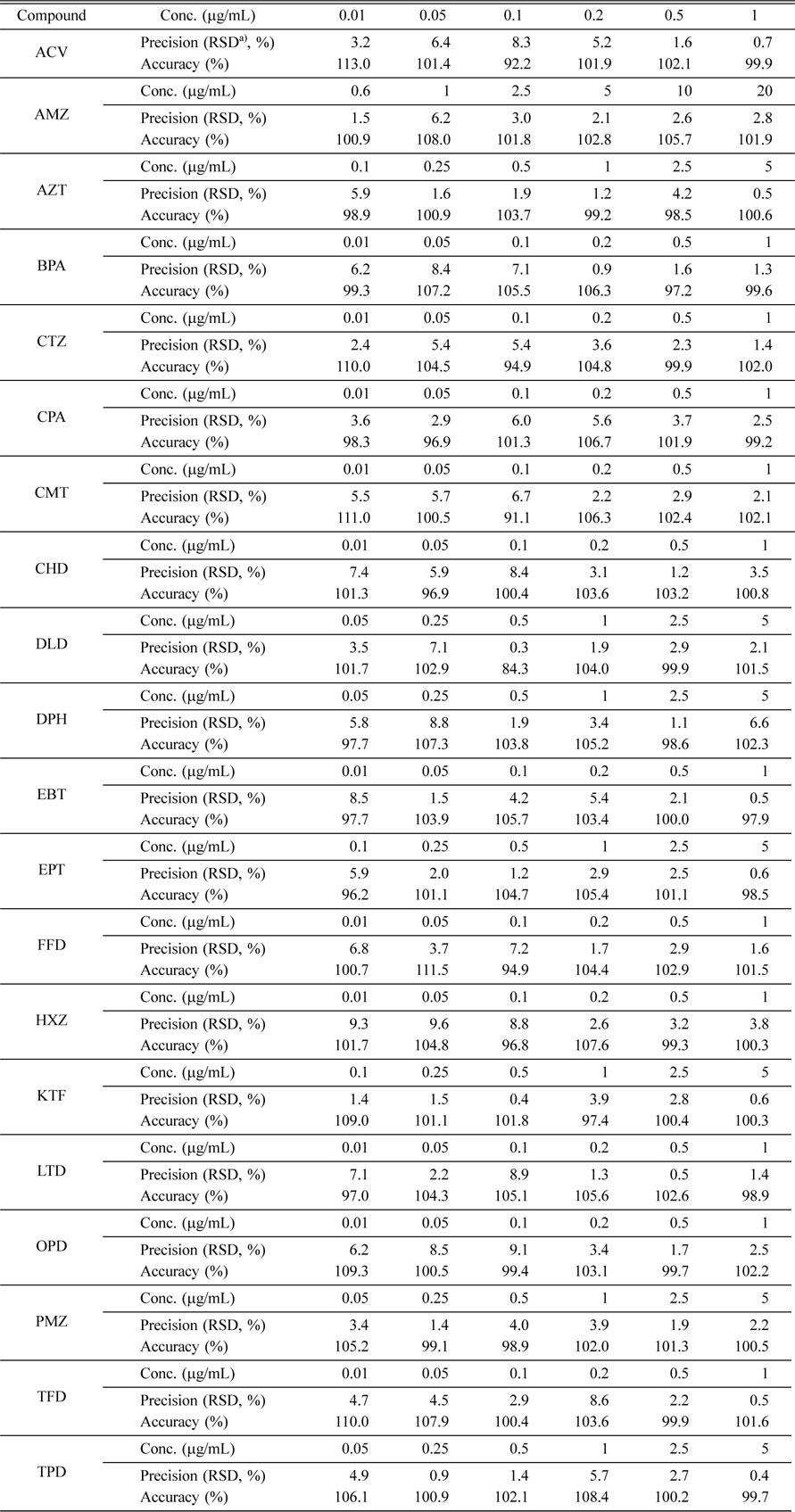 Table 5.a)RSD is defined as the standard deviation of a group of values divided by their mean 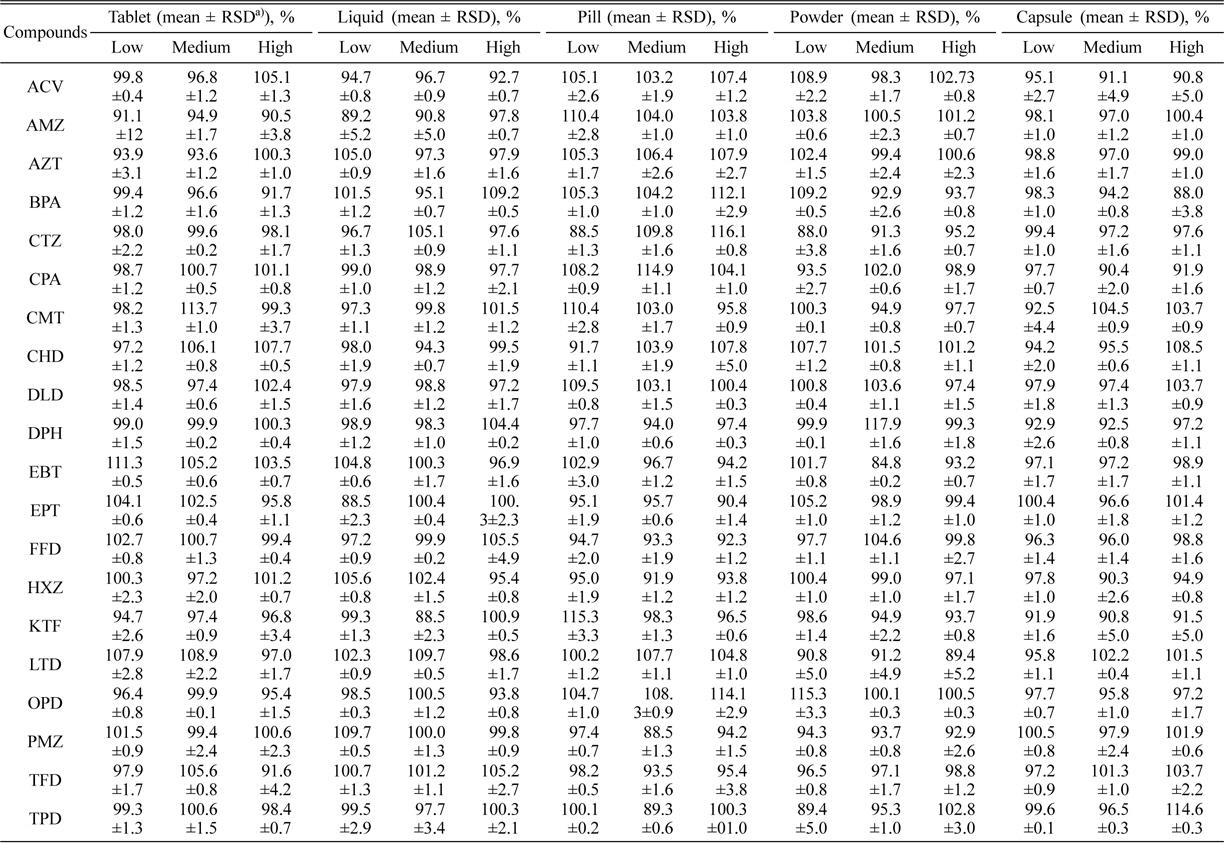 Table 6.a)RSD is defined as the standard deviation of a group of values divided by their mean 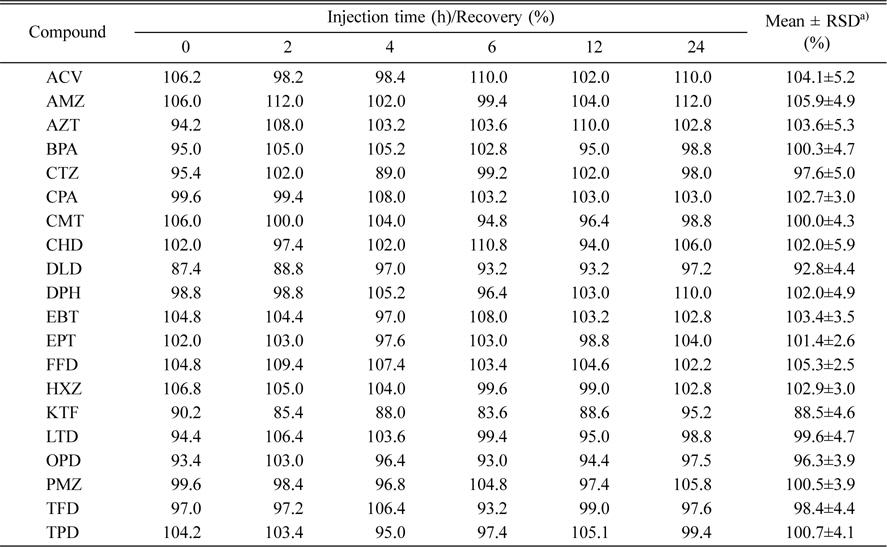 Previously, most of the simultaneous determinations of the antihistamines have been carried out only in the blood or urine samples from human; these methods can determine food or dietary supplements.

In this method, the chromatogram produced by LC-MS/MS, in addition MS/MS optimization was performed by the direct infusion and LC-MS/MS scans were performed using ESI operated in positive mode. The HPLC separation was achieved on a C18 reverse-phase column by using mobile phase of 0.1% formic acid in DW and 0.1% formic acid in acetonitrile of a gradient elution mode. The optimized method was validated for specificity, linearity, LOD, LOQ, precision, accuracy, recovery and stability according to ICH guideline. The developed method was successfully applied to determine antihistamine compound in dietary supplements without any interference. The results demonstrated that the values were within the acceptable range.

A rapid, selective, and sensitive LC–MS/MS method was developed in this study to analyze 20 antihistamines intentionally adulterated in the dietary supplements. The analytical conditions of the LC–MS/MS method were optimized. The developed method was completely validated and found to perform satisfactorily for the qualitative and quantitative analyses of antihistamines. The method was applied for the analysis of dietary supplements to determine the concentration of illegal drugs.