Determination of terbutaline in human plasma by coupled column chromatography

A method was developed and fully validated for the determination of terbutaline, a β2-receptor agonist, in human plasma. Plasma samples were prepared by solid-phase extraction with Sep-Pak silica, followed by high-performance liquid chromatography (HPLC). The terbutaline was pre-separated from the interfering components in plasma on a Luna C18 (2) column, and terbutaline and salbutamol as an internal standard were resolved and determined on a Luna Silica column. The two columns were connected by a switching valve equipped with silica pre-column. The pre-column was used to concentrate the terbutaline in the eluent from the C18 column before back-flushing onto the silica column with fluorescence detection at an excitation/emission wavelength of 276/306 nm. The method was shown to be specific by testing six different human plasma sources. Linearity was established for a concentration range of 0.4-20.0 ng/mL with a correlation coefficient of 0.9999. The lower limit of quantitation was 0.4 ng/mL with a precision of 10.1% as C.V.%.

Terbutaline, a sympathomimetic drug-selective β2-receptor agonist, is used in the treatment of asthma and lung disease. It is known chemically as ±-α-[(tert-butylamino) methyl]-3,5-hydroxybenzyl alcohol (Fig. 1).

High-performance liquid chromatography (HPLC) methods have been used extensively to quantify terbutaline in its dosage forms. HPLC methods using ultraviolet (UV) detectors have been identified as the most acceptable for terbutaline.1-2 In the USP and BP, the HPLC system consisted of a C18 column and a mobile phase made of a mixture of an ion pair solution, sodium hexanesulfonate in ammonium formate (pH 3.0), and methanol (77:23, v/v) with UV detection at 276 nm.3-4

Due to its low concentration, terbutaline in samples from pharmacokinetic studies has been analyzed by gas chromatography-mass spectrometry (GC-MS).5-7 However, most investigators have used HPLC. An isocratic paired ion HPLC method with electrochemical detection was reported for the determination of terbutaline in plasma, in which the limit of quantitation was 1 ng/mL.8 Several HPLC methods have been developed using MS9-10 or fluorescence detection11-12 to ensure adequate analytical sensitivity.

To overcome the interference by biological matrix components, coupled column chromatography has been used.13-15 The principle of coupled column chromatography is that the selective fraction of the mobile phase is transferred from the outlet of one column to the inlet of another. The column switching technique combines an automated clean-up and pre-concentration step with a separation step. Automated column-switching LC systems have the advantage that the enrichment and clean-up of the sample is performed by on-line liquid-solid extraction via a pre-column for the removal of other matrix components. With this automated column-switching technique, the drug level in plasma is easily determined without loss of accuracy and sensitivity.

A column-switching HPLC method was reported to monitor terbutaline in dog plasma with UV detection. The system consisted of a C2 pre-column and a C18 analytical column connected in series via a switching valve. The limit of quantitation was 3.0 ng/mL and the approach was used for pharmacokinetic study.16

Terbutaline sulfate and the internal standard, salbutamol, were obtained from Sigma-Aldrich (St. Louis, MO, USA). HPLC-grade n-hexane, 1,2-dichloroethane, ethyl acetate, acetonitrile, and methanol were obtained from the Duksan Pure Chemicals Co. (Ansan, Kyeonggi, Korea). Deionized water was prepared in the laboratory. All other chemicals were of analytical reagent grade.

The HPLC equipment (Fig. 2) consisted of the following components: two LC-9A pumps, two RF-10AXL fluorescence detectors with excitation/emission wavelengths of 276/306 nm, and a FCV-2AH sixport switching valve driven and time controlled by a SCL-6B controller (Shimadzu, Kyoto, Japan). The samples were applied using a Rheodyne model 7725i sample loop injector with an effective volume of 200 μL. 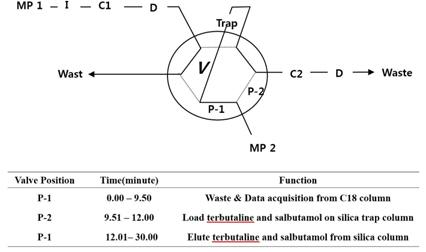 Ten microliters of internal standard solution (salbutamol, 0.25 μg/mL, in water) were spiked into 1 mL of plasma. The mixture was vortex-mixed for 10 s and applied to a Sep-Pak silica cartridge pre-conditioned with methanol (6 mL) and water (6 mL). The cartridge was washed with acetonitrile (2 mL). The analytes were eluted with 7 mL of methanol. The eluate was concentrated to dryness, and the residue was reconstituted in mobile phase 1 (500 μL) for an assay sample.

The method was validated according to the currently accepted US Food and Drug Administration (FDA) bioanalytical method validation guidance (FDA, 2001 and 2003). Spiked plasma samples were prepared by adding known amounts of terbutaline and the internal standard (salbutamol) to drug-free plasma at seven concentration levels (0.4, 0.5, 1.0, 2.0, 5.0, 10, and 20 ng/mL) and used for evaluation of linearity, accuracy, and precision. The precision and accuracy of the method were assessed through the analysis of spiked plasma samples (n = 5) at three concentrations (0.5, 2.0, and 10 ng/mL). Inter-day assays were evaluated via the analysis of samples for five different days.

2.6. Application of the method

The analytical method was applied to a pharmacokinetic study. The study was conducted on eight healthy male subjects administered two tablets of Beta-2® containing 2 mg of terbutaline sulfate from CG Pharm Ltd. (Republic of Korea) after they had been informed of the purpose protocol and risk of the study. All subjects gave written informed consent and the local ethics committee approved the protocol. The study was conducted strictly in accordance with the current Good Clinical Practices (GCP), International Conference on Harmonization (ICH), and FDA guidelines. The protocol for the study was approved by the Institutional Review Board (IRB) of the Research Institute of Pharmaceutical Science, Kangwon National University, which comprised a panel of medical practitioners. The subject were not allowed to consume any other medicine or alcohol for 2 weeks prior to or during the study. The health of the participants was judged via their clinical history, physical examination, and laboratory testing, that is, hemoglobin, hematocrit, white blood cell (WBC) and red blood cell (RBC) counts, platelets, differential counting of WBC BUN, creatinine, total protein, albumin, SGOT, SGPT, total bilirubin, cholesterol, glucose fasting, alkaline phosphatase-specific gravity, color, pH, sugar, albumin, bilirubin, ability to communicate efficiently with the researcher, and willingness to adhere to the protocol requirements. Plasma samples were obtained at 0.5, 1, 1.5, 2, 3, 4, 5, 6, 9, 12, 15, and 24 h after intake of the drug and were stored at -70 ℃ until analysis.

The compositions of the mobile phase were investigated to determine the optimal chromatographic conditions. In the column switching technique, similar mobile phases have to be used for the two HPLC system because the solvent employed for the C18 column system could flow into the silica column system. Terbutaline and salbutamol (I.S.) were separated by HPLC on the silica column using 20 mM ammonium phosphate buffer (pH 4)-methanol (20:80, v/v) as a mobile phase. A similar mobile phase was investigated for HPLC on the C18 column. We selected 5 mM ammonium phosphate buffer (pH 4)-methanol (90:10, v/v) as the optimum mobile phase for C18 column. Under these conditions, terbutaline and the internal standard were eluted as a single peak, with a peak width of approximately 1.2 min; a total fraction containing them was transferred to the trap column via a six-port switching valve. The trapping capacity of the silica pre-column was examined by altering the transfer time. shows the relationship between peak areas of the analytes and trapping windows. The peak areas of terbutaline and salbutamol reached the highest levels at the transfer window of 1.5 min, and neither their peak areas nor the peak area ratio of terbutaline to the internal standard changed when a transfer time of 2.5 min was used. The peak areas decreased with a transfer time ≥ 3.0 min. These results indicate that the transfer of a peak containing terbutaline and internal standard was complete within 2.0 min and the trapping capacity was not less than 2.5 min. Thus, the 2.5 min window for the switch was selected and satisfactory results were obtained in validation studies. 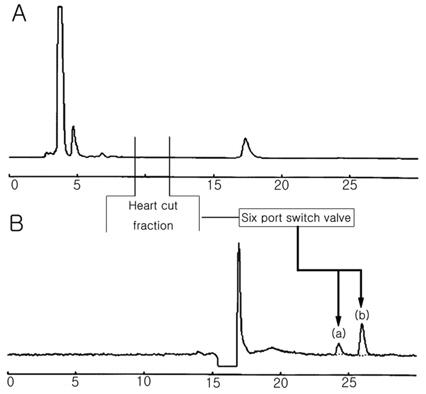 3.2. Linearity and limit of detection

The calibration curves were obtained by analyzing spiked plasma samples. Calibration curves showed good linearity in the concentration range of 0.4~20 ng/mL in plasma. The equation of the calibration line obtained was as follows: Y = 0.1834 X + 0.0244. The correlation coefficient was 0.9999 (Fig. 4). The limit of detection was 0.1 ng/mL and the limit of quantitation was 0.4 ng/mL, which was sensitive enough for the pharmacokinetic study of terbutaline. 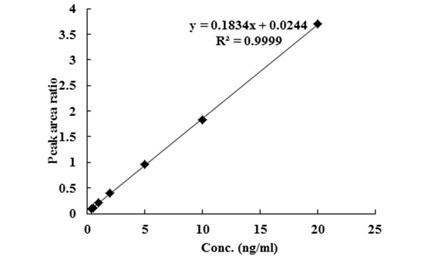 The absolute recoveries were evaluated for terbutaline by comparing peak areas of extracted samples to the unextracted pure authentic standard solutions’ peak areas at three concentrations (1.0, 7.5, and 15 ng/mL). The results ranged from 93.1% (C.V. 5.7%) to 99.9% (C.V. 9.9%).

This analytical method was applied to analyze plasma samples obtained after the administration of a single dose of two 2 mg tablets of terbutaline sulfate to eight healthy male volunteers for pharmacokinetic study. Plasma sample were obtained from 0 to 24 h after intake of the drug and were stored at -70 ℃ until analysis. The mean plasma concentration-time profile of the eight volunteers is represented in Fig. 5. 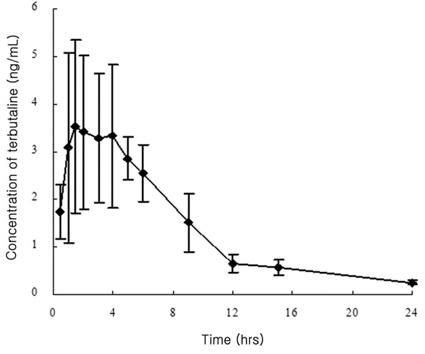 A simple, specific, sensitive, stable, and relatively rapid HPLC method was successfully developed for the determination of terbutaline in human plasma. Both optimization and validation of the method were performed and the obtained results demonstrated that the method is suitable for pharmacokinetic studies of terbutaline.

A simple, specific, sensitive, stable and relatively rapid HPLC method has been successfully developed for determination of terbutaline in human plasma. Both the optimization and validation of the method were performed and the obtained results demonstrated that the method is suitable for pharmacokinetic studies of terbutaline.