Parkinson's disease (PD) is a neurodegenerative disability caused by a decrease of dopaminergic neurons in the substantia nigra (SN). Although the etiology of PD is not clear, oxidative stress is believed to lead to PD. Catalase is antioxidant enzyme which plays an active role in cells as a reactive oxygen species (ROS) scavenger. Thus, we investigated whether PEP-1-Catalase protects against 1-methyl-4-phenylpyridinium (MPP+) induced SH-SY5Y neuronal cell death and in a 1-methyl-4-phenyl-1,2,3,6-trtrahydropyridine (MPTP) induced PD animal model. PEP-1-Catalase transduced into SH-SY5Y cells significantly protecting them against MPP+-induced death by decreasing ROS and regulating cellular survival signals including Akt, Bax, Bcl-2, and p38. Immunohistochemical analysis showed that transduced PEP-1-Catalase markedly protected against neuronal cell death in the SN in the PD animal model. Our results indicate that PEP-1-Catalase may have potential as a therapeutic agent for PD and other oxidative stress related diseases. [BMB Reports 2015; 48(7): 395-400]

Parkinson’s disease (PD) is a neurodegenerative disability which involves degeneration of substantia nigra (SN) leading to a deficiency of dopamine (1). Symptoms of PD include tremor, rigidity, muscle stiffness, bradykinesia, postural instability which may eventually lead to movement disorders (2). The etiologies include a lack of dopamine or an excess of acetylcholine in the brain. Similar symptoms are known to occur in cases of vascular disorders of the brain, neoplasm, and head injury (3). Although the mechanism of cellular death is not clearly understood, aging, inflammation, as well as chemical, and genetic factors in the development of the disorder appear to be involved with the onset of PD (1,4-6).

Catalase is known as a major antioxidant enzyme which neutralizes the harmful effects of reactive oxygen species (ROS) and as such, is considered beneficial in the treatment of many disorders. Catalase protects cells through 2 processes: prevention of hydroxyl radical generation and by the separation of hydrogen peroxide into water and oxygen. Removing the oxygen free radicals is very important in maintaining the stabilized redox status of cells (7).

Protein transduction domains (PTDs) are small peptides which are capable of transducing macromolecules into cells and tissues without any specific receptors (8). A recent study demonstrated that transduced Tat-PRDX6 protein protects against eye lens epithelial cell death and delayed lens opacity, suggesting that protein transduction could be an effective approach to delaying eye disease (9). Previous studies by this group have demonstrated that PEP-1 fusion proteins efficiently transduce into various cells and protect against a variety of diseases including skin inflammation and neuronal diseases (10-17). Also, we demonstrated that PEP-1-Catalase transduced into astrocyte cells and protected against oxidative stress-induced cell death as well as ischemic injury (18).

Purification and transduction of PEP-1-Catalase into SH-SY5Y cells

Catalase is a major antioxidant enzyme found in almost every living organism and plays an important role in protecting cells from the damage induced by reactive oxygen species (ROS) (7, 19). Catalase has therefore been considered for therapeutic use in ROS-related diseases.

Protein transduction domains (PTDs) have demonstrated their ability to deliver exogenous proteins into cells which has potential for targeting specific proteins, delivering them into living cells. There is also room for the examination of novel therapeutic proteins (8, 20). PEP-1-Catalase and control catalase proteins were expressed and purified as described previously (18) and were confirmed by SDS-PAGE and Western blot analysis using an anti-histidine antibody (Fig. 1A). In order to clearly confirm whether PEP-1-Catalase transduced into the cells, we used confocal fluorescence microscopy analysis using an His antibody, DAPI, and Alexa fluor-488 conjugated secondary antibody. As shown in Fig. 1B, strong fluorescence signals were detected in the PEP-1-Catalase treated cells while fluorescence signals were not detected in the control catalase treated cells. 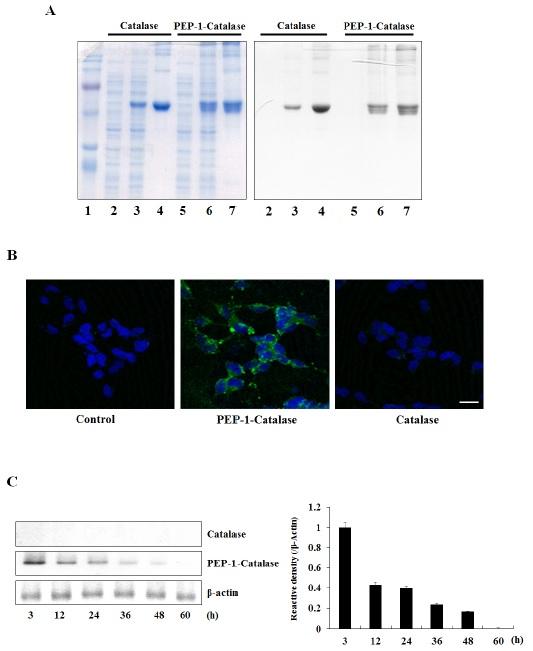 1-Methyl-4-phenylpyidinium ion (MPP+) is known to induce ROS in dopaminergic neuronal cells which then leads to DNA fragmentation and eventually to cell death (21-23). MPP+, the active metabolite of 1-methyl-4-phenyl-1,2,3,6-tetrahydropyridine (MPTP), has been used extensively in PD experiments as a classic neurotoxin for its ability to induce PD-like symptoms including loss of dopaminergic cells damage and death (24-26). Therefore, we confirmed whether transduced PEP-1-Catalase can protect against MPP+-induced SH-SY5Y cell death. As shown in Fig. 2A, transduced PEP-1-Catalase markedly increased cell viability in a concentration dependent manner, up to 76%. On the other hand, cell viability was roughly the same as the cells treated with MPP+ alone (46%) compared with control catalase treated cells (52%). 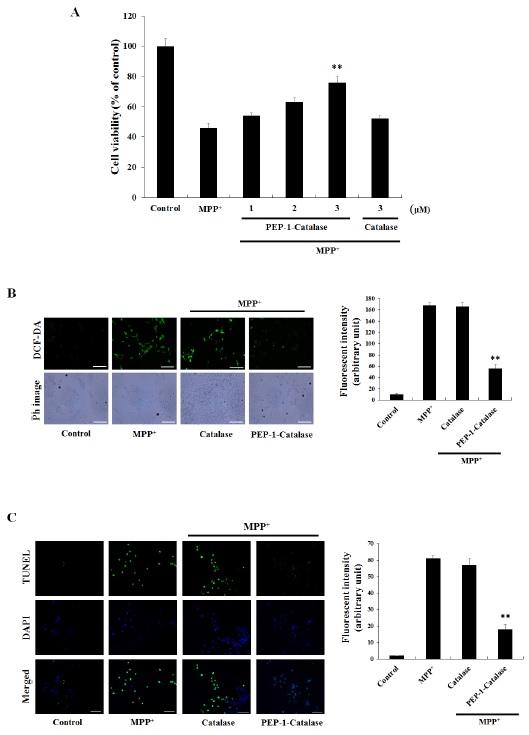 Fig. 2.Inhibitory effects of PEP-1-Catalase against cell death and cytotoxicity by MPP+. (A) After pre-processing with 3 μM of PEP-1-Catalase and control catalase protein for 3 h into SH-SY5Y cells, (A) cell viability, (B) intracellular ROS levels, and (C) DNA fragmentation were detected by MTT assay, DCF-DA and TUNEL staining, respectively, as described in Materials and Methods. Scale bar = 50 μm. **P ＜ 0.01, compared with MPP+-treated cells. 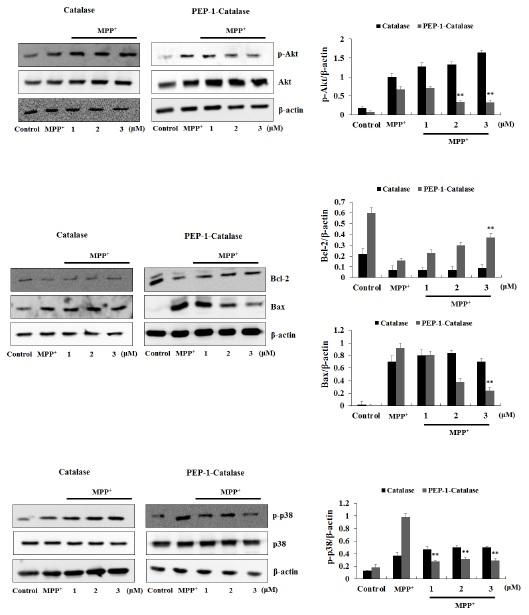 Fig. 3.Effects of PEP-1-Catalase against MPP+-induced cell survival signals in SH-SY5Y cells. After treatment of SH-SY5Y cells with 3 μM of PEP-1-Catalase and control catalase proteins, the cells were treated with 4 mM of MPP+ for 10 min (p-Akt), 3 h (Bax and Bcl-2), and 35 min (p-p38), respectively. The indicated protein levels were measured by Western blot analysis and the band intensity were measured by densitometer. **P ＜ 0.01, compared with MPP+-treated cells.

The expression of several cell survival proteins including Bax, Bcl-2, Akt, p38 have been shown to be regulated by ROS and their importance in cell survival has also been well documented (22, 24, 25, 28). Akt is also known to be a cell survival mediator and studies have demonstrated that the expression levels of these survival proteins were influenced by exposure to MPP+ (27-29). Consistent with other studies, we demonstrated that PEP-1-Catalase regulates cell survival signals and protects against MPP+-induced SH-SY5Y cell death. However, further studies are needed to examine the exact mechanism. 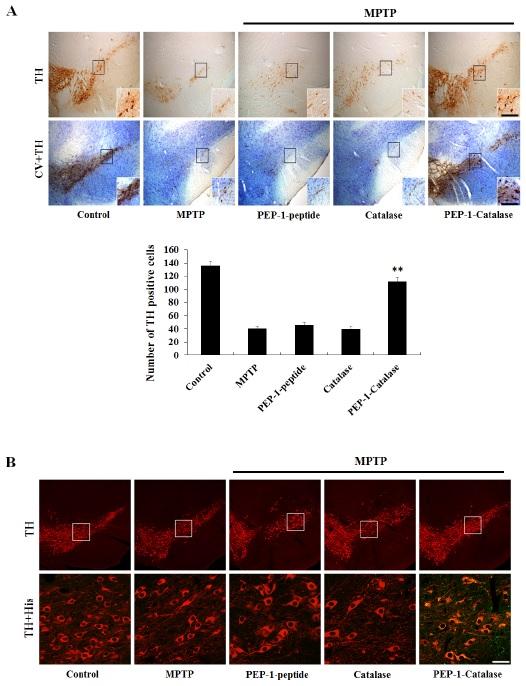 We further examined transduced PEP-1-Catalase localization in the substantia nigra (SN) region. PEP-1-Catalase (2 mg/kg) was i.p. injected into mice before MPTP treatment. Brain tissue samples were obtained 12 h after MPTP injection and double-stained with a TH antibody (red) and an His antibody (green). As shown in Fig. 4B, there is no difference in the TH staining between the sham control and others groups. However, green fluorescent staining was only detected in the PEP-1-Catalase-treated group. Our results demonstrated that PEP-1-Catalase efficiently crossed the BBB and markedly protected against MPTP-induced dopaminergic neuronal cell death. In agreement with our results, other studies have demonstrated that overexpression of antioxidant proteins significantly protects against dopaminergic neuronal cell death in PD models (30).

In conclusion, PEP-1-Catalase efficiently transduced into neuronal cells and protected against oxidative stress-induced dopaminergic neuronal cell death in vitro and in vivo. Though further study will be necessary to understand the precise mechanism our results show that PEP-1-Catalase has potential in the treatment of ROS-related diseases including PD.

PEP-1-Catalase and control catalase protein were constructed, overexpressed, and purified as described previously (18). The primary p38, p-p38, Akt, p-Akt, Bax, and Bcl-2 rabbit antibodies were purchased from Cell signaling (Denvers, MA, USA). His rabbit primary antibody and secondary anti-rabbit antibody were obtained from Santa Cruz Biotechnology (CA, USA). Unless otherwise stated, all other chemicals and reagents were purchased from Sigma-Aldrich (St. Louis, MO, USA) and were of the highest quality analytical grade accessible.

A cell viability assay was performed using 3-(4,5-dimethylathiazol-2-yl)-2,5- diphenyltetrazolium bromide (MTT) as described previously (10,13). Cells were plated in a 96-well plate and treated with PEP-1-Catalase (1-3 μM) for 3 h. Then the cells were washed with PBS and incubated with 1-methyl-4-phenyridinium (MPP+) 4 mM for 17 h. MTT solution was administered to each well. After 4 h of incubation, the precipitated formazan crystal was dissolved in dimethyl sulfoxide and absorbance was measured at 570 nm using an ELISA microplate reader (Lab systems Multiskan MCC/340). Cell viability was defined as the percentage of control cells.

For detection of transduced PEP-1-Catalase in SH-SY5Y cells, Confocal fluorescence microscopy was performed as described previously (10, 13). The cells were seeded on coverslips after which they were exposed to PEP-1-Catalase and control catalase protein (3 μM) for 3 h. Cells were then washed with PBS twice and fixed with 4% paraformaldehyde at room temperature for 5 min. The cells were incubated with an anti-histidine primary antibody and an Alexa Fluor 488-conjugated secondary antibody (Invitrogen; Carlsbad, CA, USA). Nuclei were stained for 5 min with 1 μg/ml 4'6-diamidino-2-phenylindole (DAPI; Roche Applied Science, Basel, Switzerland). An Olympus FV-300 confocal fluorescence microscope (Olympus, Tokyo, Japan) was used to analyze fluorescence images.

Intracellular ROS levels were determined using 2'7'-dichlorofluorescein diacetate (DCF-DA) staining as described previously (10,13). After being incubated with PEP-1-Catalase or control catalase protein (3 μM) for 3 h, SH-SY5Y cells were exposed to MPP+ (4 mM) for 40 min. Cells were then washed twice with PBS and stained with DCF-DA (30 μM) for 30 min. Photomicrographs of each sample were taken using an Eclipse 80i fluorescence microscope (Nikon, Tokyo, Japan). Under the same experimental conditions, the fluorescence intensity was quantified using a Fluoroskan ELISA plate reader (Labsystem Oy, Helsinki, Finland).

DNA fragmentation was determined using TUNEL staining as described previously (10, 13). SH-SY5Y cells were incubated on coverslips with PEP-1-Catalase or control catalase protein (3 μM) for 3 h, after which they were treated with MPP+ (4 mM) for 14 h 30 min. A Cell Death Detection kit (Roche Applied Science, Basel, Switzerland) was used to perform TUNEL staining according to the manufacturer's instructions. Fluorescence micrographs were produced using an Eclipse 80i fluorescence microscope (Nikon, Tokyo, Japan). Under the same experimental conditions, the fluorescence intensity was quantified using a Fluoroskan ELISA plate reader (Labsystem Oy, Helsinki, Finland).

Male, 6-week-old, C57BL/6 mice were obtained from the Hallym University Experimental Animal Center. The animals were housed at a constant temperature (23℃) and relative humidity (60%) with an alternating 12 h light-dark cycle. They were provided free access to food and water. All procedures regarding animals and their care conform to the Guide for the Care and Use of Service of Korea and were approved by the Hallym Medical Center Institutional Animal Care and Use Committee.

An animal PD model was prepared as described in previous studies (13). The mice (n = 5/each group) were divided into five groups; 1) non-treated sham controls, 2) MPTP-treated, 3) MPTP + PEP-1 peptide-treated, 4) MPTP + control catalase-treated, 5) MPTP + PEP-1-Catalse-treated. The mice received four injections of MPTP (20 mg/kg) at 2 h intervals. To determine the protective effects of PEP-1-Catalase against PD, mice were single i.p. injected with PEP-1-Catalase (2 mg/kg) 12 h before the MPTP injection. 7 days after the last injection, mice were euthanized for immunohistochemistry.

To examine the localization of PEP-1-Catalase in the SN of mice, animal PD models were prepared as described above. Mouse brains were harvested 12 h later and immunohistochemistry was performed.

Immunostaining was performed as described in previous studies (13). Sections were blocked with 3% bovine serum albumin in PBS at room temperature for 30 min and then were incubated with an His antibody for detection of PEP-1-Catalase or with a tyrosine hydroxylase (TH) antibody to detect DA neurons. To detect viable cells, cresyl violet counter-staining for Nissl bodies was carried out after TH-immunostaining. The sections were visualized with 3,3'-diaminobenzidine in a 0.1 M Tris buffer and mounted on gelatin-coated slides. Images were taken and analyzed using an Olympus DP72 digital camera and DP2-BSW microscope digital camera software. Figures were prepared using Adobe Photoshop version 7.0 (San Jose, CA, USA).