Here, we present a new framework for histogram equalization in which both local and global contrasts are enhanced using neighborhood metrics. When checking neighborhood information, filters can simultaneously improve image quality. Filters are chosen depending on image properties, such as noise removal and smoothing. Our experimental results confirmed that this does not increase the computational cost because the filtering process is done by our proposed arrangement of making the histogram while checking neighborhood metrics simultaneously. If the two methods, i.e., histogram equalization and filtering, are performed sequentially, the first method uses the original image data and next method uses the data altered by the first. With combined histogram equalization and filtering, the original data can be used for both methods. The proposed method is fully automated and any spatial neighborhood filter type and size can be used. Our experiments confirmed that the proposed method is more effective than other similar techniques reported previously.

Image contrast enhancement methods are widely used in many fields, such as medical imaging, satellite imaging, consumer electronics, digital TV, digital cameras, and so forth. Many methods have been introduced for image enhancement, among which histogram equalization is the most commonly used due to its effectiveness and simplicity.

Global histogram equalization (GHE) transforms the result image to ensure a uniform distribution of gray levels [1]. This method flattens and stretches the dynamic range of the image’s histogram, which results in overall contrast improvement [2-6]. Essentially, GHE maps the gray levels in the enhanced image through a transformation function that depends on the distribution of gray levels in the input image. This transformation function stretches the contrast of the high histogram region and compresses the contrast of the low histogram region. GHE achieves comparatively better performance on almost all types of image [7]. However, it changes the original image’s brightness, while reducing the quality of the original image and in some cases causes a washout effect (Fig. 1). 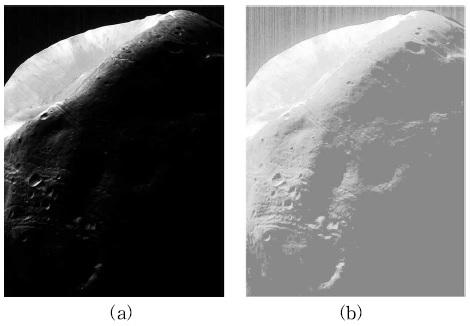 Fig. 1.Illustration of washout appearance: (a) Darker Mars image and (b) resultant image of GHE.

To overcome the washout effect, brightness-preserving extensions of GHE have been developed, such as brightness-preserving bi-histogram equalization (BBHE) [8], dualistic sub-image histogram equalization (DSIHE) [9], and minimum mean brightness error bi-histogram equalization (MMBEBHE) [10]. These methods partition the histogram of the original image into sub-histo-grams and then equalize each sub-histogram independently with GHE. In doing so, they equalize some sub-images over their ranges toward the mean and equalize others over their ranges away from the mean, depending on their respective histograms. Thus, the resulting equalized sub-images preserve the overall mean brightness. BBHE, DSIHE, and MMBEBHE divide the histogram into two sub- histograms as different dividing points. BBHE uses the mean value of the histogram, while DSIHE uses the median value. MMBEBHE first tests all possible values of the separation point from all gray levels. The differences between the mean value of the original image’s histogram and the mean values of the sub-histograms are calculated for each separation point. The separation point is then chosen to achieve the minimum difference between the input and output means.

Another major drawback of GHE is that it cannot adapt the local information of the image. Although many methods have been developed to improve local contrast [11,12], their computational complexity is very high and they sometimes cause over-enhancement, which may affect the characteristics of the original image.

Some methods have been developed to reduce these drawbacks [13-15]. These methods divide the input histogram bins into sub-bins using neighboring information, and can therefore enhance local contrast and prevent over-enhancement. However, these methods do not provide a great deal of enhancement.

Previous studies did not consider the enhancement of noisy images. Therefore, this paper presents a novel histogram equalization method, which is based on brightness-preserving methods and neighborhood metrics to improve local contrast. We also propose the use of filters to improve image quality [16]. This is expected to not only eliminate the above drawbacks of previous GHE methods but also to reduce noise from the input image. It is possible to use the filtering technique directly; however, our method saves time by combining the filtering process using neighboring information checked on each pixel in the neighborhood metric. The neighborhood metric is not efficient because neighboring information is changed from the original image after applying the filters, and therefore the filtering technique is applied simultaneously.

Let h(i) be the -th bin of intensity level of original image f, and then p(i) be the probability that the gray level of any given pixel i (0 ≤i ≤ L-1).

where f and g are the original and resultant images, respectively, (x, y) are the 2D coordinates of the images, and T is the intensity transformation function, which maps the original image to the entire dynamic range [0, L-1], using CDF:

Next, we define the respective probability distribution functions of sub-images f1 and f2 as

The respective CDFs are then defined as

Note that P1(m)=1 and P2(L-1)=1 by definition. Let us similarly define the following transformation functions exploiting the CDFs

Then, the resultant image of the histogram can be expressed as

where f and g are the original and resultant images, respectively, (x, y) are the 2D coordinates of the images, and T1 is the intensity transformation function, which maps the original image into the entire sub-bin’s range, [0, R-1] using CDF:

In the proposed method, the image histogram is divided into two sub-histograms to preserve the image brightness and each histogram bin of each sub-histogram is divided by a distinction metric into sub-bins [17-19]. Filtering of any drawbacks during the enhancement of image contrast requires rearrangement of the histogram when checking the neighborhood metric (Fig. 2). This rearrangement is described below, and all spatial neighborhood filter types are possible. To check all image pixels that have been neighbors, it is necessary to extend the input image. 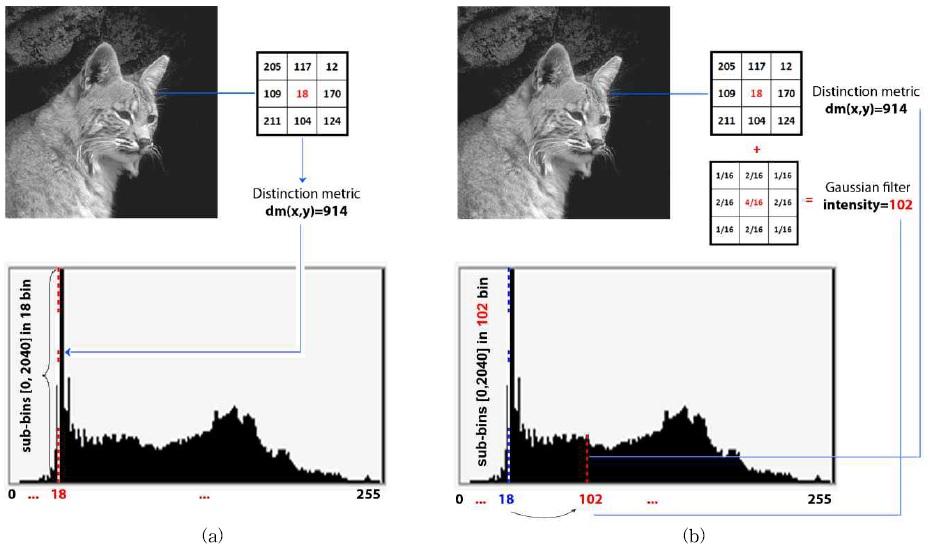 Fig. 2.Illustration of the neighborhood metric and filtering in a histogram bin. Pixels of equal intensity are arranged into sub-bins using neighborhood information (a) without filtering and (b) with filtering.

Let γ be the function that extends an image function surrounded by a “background” of zero padding:

in which an image is N pixels by M pixels in size and g(x,y) is the intensity of image pixel (x,y).

The distinction metric is expressed by the following formula:

which requires the following distinction function:

in which the distinction metric, dθ, is defined by Rθ(x,y), the set of pixels forming a square in the θ×θ square neighborhood centered on (x,y), (xʹ,yʹ), is a pixel of Rθ and θ is a positive odd integer.

Fig. 3 shows the difference between direct filtering and simultaneous filtering with the neighborhood metric. As shown Fig. 3, although filtered (b) and GHE (c) results are small different, but contrast is not enough due to inhomogeneous intensities. However the proposed method solved that problem in Fig. 3 (d) and (e).

Next, we define the respective probability distribution functions of sub-images f1 and f2 as

The respective CDFs are then defined as

Note that P1(mr)=1 and P2(R-1)=1 by definition. Let us similarly define the following trans-formation functions exploiting the CDFs

Then, the resultant image of the histogram can be expressed as

in which f and g are the original and resultant images, respectively, (x,y) are the 2D coordinates of the images, and T is the intensity transformation function, which maps the original image into the entire sub-bin’s range, z, using CDF:

We used a slightly modified GHE method to consider the resultant image histogram “optimally full” [15]. That is, we never overfill a sub-bin by more than half its size.

In the experiment, we tested the proposed method on three images affected by Gaussian noise (3×3, σ=0.5) compared to the GHE, BBHE, DSIHE, and MMBEBHE methods. To define image brightness preservation, we used the absolute mean brightness error (AMBE) and flatness (σ).

To measure the flatness σ of a histogram h, we compute the variance of the bin sizes:

where | hi | is the size of the i-th bin of the image’s histogram, μh is the mean histogram bin size, and D is the number of grey-level intensities. A smaller value of σ indicates a flatter histogram.

In experimental figures, the images in the first row were directly enhanced by the various methods and those in the second row were first treated with the Gaussian filter and then enhanced by the various methods. Although the former images were enhanced, noise remained in all result images, whereas those pretreated with the Gaussian filter were better. However, the results were not better than our proposed method. In Fig. 4, local and global contrast are improved simultaneously while reducing a noise effect. For example, the noise effect on wall of building is reduced more effective than that of various method results.

Table 1 shows the AMBE values for three images enhanced by various methods. The value for the proposed (FBHEM) method was lower than for the others. A smaller AMBE is better, implying that the means of the original and result images are close. This means that the FBHEM method can preserve the image brightness. As shown in Table 1, the AMBE value of FBHEM for image I was larger than those of MMBEBHE and BBHE. However, the FBHEM result looked good on visual comparison. Table 1 also shows the AMBE values of images that were first treated with the Gaussian filter and then equalized.

The proposed method is based on brightness-preserving contrast enhancement techniques and neighborhood metrics to improve local contrast, in addition to improving image quality by the image filtering process while checking neighborhood information. It is expected to not only retain the advantages of previous methods but also to improve image quality. It is possible to perform the filtering technique and then contrast enhancement sequentially. However, our method's important point to note here is that the original image information can be used for both brightness-preserving global and local contrast enhancement, and image quality improvement filtering. For example, if we first perform filtering alone, this would modify the intensities of the original image, and then neighborhood metrics would use these modified intensities of the original image. Thus, the second method uses modified information affected by the first process. 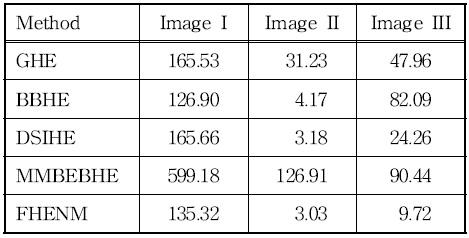