The Korean Society for Microbiology and Biotechnology (한국미생물·생명공학회)

In this study, the probiotification of mango juice was carried out by lactic acid bacteria fermentation. Mango juice fermentation was performed at 30℃ for 72 h under micro-aerophilic conditions. The microbial population, pH, titrable acidity, sugar, and organic acid metabolism were measured during the fermentation period and the viability of the strains was determined under the storage conditions at 4℃ for 4 weeks. The lactic acid bacteria reduced the pH to as low as 3.2 from 4.5 within 72 h of fermentation. The substrate concentration was reduced to 5.8% (w/v) from 12% (w/v). Lactobacillus plantarum exhibited the fastest utilization of sugar and reduction of pH in the mango juice when compared to the other strains used. The viability of the cells was maintained at 1.0 × 107 CFU/ml throughout the storage period. From this investigation, it can be concluded that mango juice is suitable for the production of probiotic beverage.

Probiotics are live organisms, which provide a benefit to the host when provided in adequate quantities. Probiotification of foods is one of the methods used to produce functional foods. Probiotics have been shown influence on the growth and/or metabolic activity of the gut microbiota and, thereby, its composition and functions [2]. They provide several health benefits including reduction in the level of serum cholesterol, improvement of gastrointestinal function, enhancement of immune system, and reduction in risk of colon cancer and should be in high concentration typically 106 CFU/g of product [1, 8, 9, 14, 18, 21]. In present scenario, probiotics have been added to yogurt and other fermented dairy products. However, an increased demand for non-dairy probiotic products comes from vegetarianism; lactose intolerance, milk cholesterol content, milk protein allergy, and others factors [16]. This fact has led to development of probiotic products from various food matrices including fruits and vegetables [13, 29]. Different studies have been carried out to explore the suitability of fruit juices such as tomato, beet and cabbage juices as raw materials for the production of probiotic drinks. Various lactic acid bacteria have been employed as probiotic bacterial cultures. Results have indicated that all the strains are capable of growth in the fruit juices and the microbial population increases significantly after 24 h of fermentation [7, 23, 27- 29].

Mango is the most cultivated and occupied 60% of the total area under fruits. Mango contains a high concentration of sugar (16−18% w/v) and acids with organoleptic properties, and also contains antioxidants like carotene (as provitamin A, 4,800 IU) are helpful as cancer-preventing agents. Mango juice along with aromatics is recommended as a restorative tonic; it contains good concentrations of vitamin A and C, which are useful in heat apoplexy. The surplus amounts are preserved in the form of dried slices, pickles, canned pulp, as juice and powder and also as wine through fermentation [17]. An alternative and profitable method of utilizing the surplus mangoes would be the probiotification if it could become widely accepted. In view of the above, the aim of the present research is to investigate the suitability of the mango juice for probiotification, evaluate the growth rate and substrate metabolism of selected probiotic lactic acid bacteria, and evaluate their viability in cold storage conditions. This study would give an opportunity to introduce a novel probiotic fruit (mango) drink with inherent health benefits.

Mangoes used in this study were procured from local market of Kadapa and were washed with 1% HCl and peeled off manually. Pulp was recovered manually and up to 50 mg/l potassium metabisulfite was added in accordance with the degree of maturation and hygienic state of the mango fruits. Samples were treated with previously optimized enzyme concentration and conditions (0.8% and pH 5.0) of Trizyme P50, pectinolytic enzyme procured from Triton Chemicals (Mysore, India). Juice was extracted as mentioned earlier by Reddy and Reddy [17].

Probiotic lactic acid bacteria, Lactobacillus acidophilus (MTCC10307), Lactobacillus delbrueckii (MTCC911), Lactobacillus plantarum (MTCC9511) and Lactobacillus casei were obtained from Microbial Type Culture Collection Center (MTCC), Chandighar, India. The cultures were grown at 30℃ for 24 h in MRS (de Man, Rogosa, and Sharpe) broth and were used as an inoculum. Stock culture was prepared by adding sterile glycerol (50%, v/v) to the activated culture. The glycerol stock culture was stored frozen (−20℃) in sterile screw cap tubes containing 10 ml of the culture suspension. Fermentation experiments were conducted in 250 ml Erlenmeyer flaks each containing 100 ml of pasteurized mango juice. All samples were inoculated with 5% (>105 CFU/ml) of 24 h culture and incubated at 30℃ for 72 h. The variation of viable cell number, pH and reducing sugar contents was monitored periodically during incubation.

The reducing sugars were measured by adding 0.3 ml of appropriately diluted sample to a tube, applying 0.9 ml of dinitrosalicylic acid (DNS) reagent, thoroughly mixing, heating in boiling water for 5 min, and cooling on ice [10]. The absorbance was measured at 546 nm with a UV spectrophotometer (UV-1601, Shimadzu Co., Kyoto, Japan). The reducing sugar content was determined using a glucose standard curve.

The pH was measured directly using a pH meter (Elico, India). For acidity measurement, 3 drops of 1% phenolphthalein was added to 10 ml of samples, and titrated by addition of 0.1 N NaOH. Then, the acidity (%) was calculated by inserting the amount of NaOH added into the following equation:

Viable cells (CFU/ml) were determined by the standard plate count method using MRS medium. To determine the effect of cold storage on viability after completion of fermentation, the fermented samples were stored at 4℃ for 4 weeks and the viability of probiotic bacteria was measured during storage time. The microbial population was measured at weekly intervals and expressed as CFU/ml. All of these determinations were carried out in three replications.

All experiments were carried out in triplicate, and each sample was analyzed in duplicate. The results are expressed as mean ± S.D. (standard deviation). The Microsoft Excel statistical computer package was used to analyze the experimental data (Microsoft, USA).

The four lactic acid bacteria used in this study showed good growth in mango juice and found capable of rapidly utilizing mango juice for cell synthesis and lactic acid production without nutrient supplementation. Viable cell counts and cell production rate of the fermentation process for each strain are presented in Fig. 1 and Fig. 2, respectively. A small decline in the microbial population was observed for all strains from the inoculation to the first 12 h of the fermentation. This may be due to the stress induced from the differences between the pre-culture medium and the fermentation medium which resulted in decrease of the growth rate at the earlier stage of fermentation process. The MRS broth, as the pre-culture medium, has a pH of about 5.6 but the initial pH of the mango juice was relatively lower (approximately 4.5). Yanez et al. [26] also reported that low pH of the medium can lead to the decrease in the maximum growth rate and an extended length of the lag phase. However, after passing the lag phase, the bacterial population of L. casei, L. acidophilus, L. delbruekii and L. plantarum increased to 1.5 × 109, 1.7 × 109, 2.0 × 109 and 2.2 × 109 CFU/ml, respectively (Fig. 1). As expected from the results of viable cell counts, Fig. 2 shows that the highest cell production rate was observed from the culture of L. plantarum (3.1 × 106 CFU/ml·h). The second highest cell production rate was ranked by the culture of L. delbrueckii (2.8 × 106 CFU/ml·h). From these results, it can be concluded that L. plantarum and L. delbruekii had a better growth rate in mango juice. Mousavi et al. [11] have been reported that L. plantarum was gown well in the selected four lactic acid bacteria in pomegranate juice. 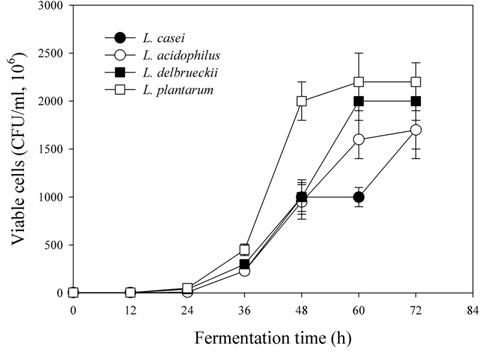 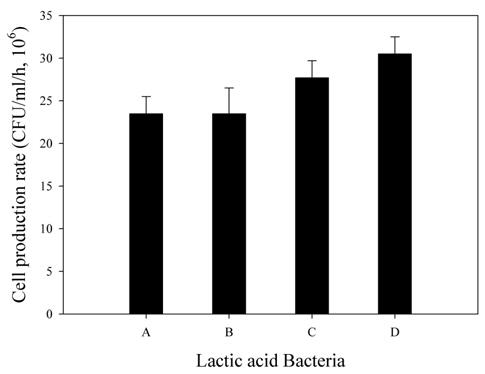 Substrate (sugar) utilization during mango juice fermentation by L. acidophilus, L. plantarum, L. casei and L. delbrueckii was given in Table 1. The lactic acid cultures rapidly fermented mango juice and reduced the level of sugar. L. plantarum consumed the sugar at a much faster rate than L. acidophilus, L. casei, and L. delbrueckii. For example, L. plantarum reduced the sugar level from an initial value of 12% to 9.2%, 6.4%, and 5.8 % after 24, 48, and 72 h of fermentation, respectively. As shown in Fig. 1, the four lactic acid cultures grew rapidly in mango juice and reached to a viable cell population of greater than 1.0 × 109 CFU/ml after 40 h of fermentation at 30℃. Extending the fermentation time from 48 to 72 h did not result in a significant increase in viable cell counts. This could be due to the low pH and high acidity in the fermented mango juice. The previous reports have proved that metabolism of carbohydrates by Lactobacillus varies from strain to strain and depends on the substrate and even on the fermentation time [5, 24]. Wang et al. [25] have also suggested that the glucose is a very good carbon and energy source for Lactobacilli and Bifidobacteria.

Fig. 3 and Fig. 4 show the changes in pH and acidity during mango juice fermentation by L. acidophilus, L. plantarum, L. casei and L. delbrueckii, respectively. Although the mango juice had an initial pH value of 4.5, the four lactic acid cultures actively fermented the mango juice and lowered the pH to as low as 3.2 after 72 h of fermentation (Fig. 3). Especially, L. plantarum showed a more rapid drop in pH than the other three lactic acid cultures examined. As shown in Fig. 4, L. plantarum produced significantly more acid during mango juice fermentation than the other three cultures examined. It was reported that acid production ability by lactic acid bacteria, especially post-incubation (post-acidification), affected the cell viability of probiotic bacteria including L. acidophilus and Bifidobacterium bifidum [6, 20]. As depicted in the aforementioned results, the majority of the changes observed in microbial population, pH, acidity, sugar consumption, and lactic acid metabolism, happened in the period between 30 h to 48 h of the fermentation. Further extension of the fermentation process (from 48 h to 72 h) did not result in significant changes and similar results were reported by Mousavi et al. [11] and Yoon et al. [28]. 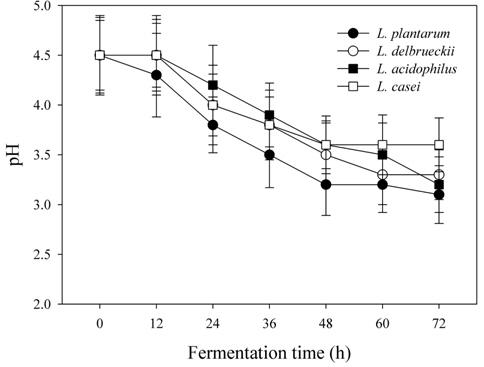 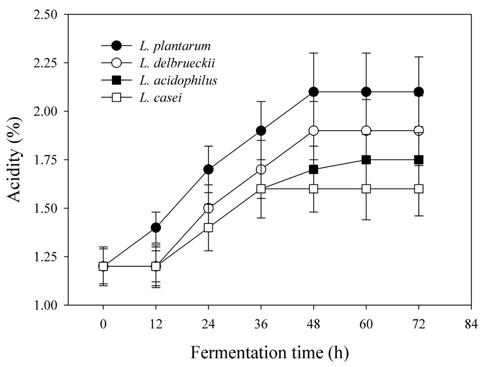 In general, the cell viability depends on the strains used, interaction between species present, culture condition, oxygen content, final acidity of the product, and the concentration of lactic acid and acetic acid. The main factors for loss of viability of probiotic organisms have been attributed to the decrease in the pH of the medium and accumulation of organic acid as a result of growth and fermentation [4, 18]. In this study, all the four lactic acid bacteria used were survived in the fermented mango juice with high acidity and low pH without addition of any nutrients. The results of this research suggest that the fermented mango juice might serve as a probiotic beverage for vegetarians or consumers allergic to dairy products.

In conclusion, four lactic acid bacteria such as L. casei, L. delbrueckii, L. plantarum, and L. acidophilus were found capable of rapidly utilizing mango juice for cell synthesis and lactic acid production without pH adjustment. They reduced the pH to as low as 3.2 and increased the acidity to as high as 1.72%, and the viable cell counts reached to 1.0 × 109 CFU/ml after fermentation of 72 h at 30℃. All the four lactic acid bacteria survived under the low pH and high acidity conditions during 4 weeks of cold storage at 4℃. From the results of this study, it can be concluded that the mango juice could be used as one of the non-dairy raw material for lactic acid bacteria and the product could serve as a probiotic/health drink/beverage for vegetarians and fruit juice lovers and consumers who are allergic to dairy products. Further studies have to be focused on the characterization and evaluation of functional properties of the probiotic mango juice.