The Korean Society of Fisheries and Aquatic Science (한국수산과학회)

Low-value fish is the most commonly used feed in Asian fish farms despite the fact that its application is controversial in regard to the sustainability and biosecurity of aquaculture. In this study, the causal agent of a disease outbreak at a Korean rockfish Sebastes schlegeli farm was investigated to determine whether the low-value fish used at the farm was the source. Infected Korean rockfish and Pacific sand eel used as feed were sampled from the farm, and bacterial cultures recovered from the internal organs of all sampled rockfish were isolated as pure cultures and later identified as Vibrio harveyi. The causal agent of the disease was also isolated from the kidneys of some of the sampled Pacific sand eels. This study provides additional evidence that the low-value fish used as feed at fish farms can be a key source of infectious diseases.

Low-value, or trash fish (i.e., as raw ingredients not reduced to fishmeal), is a term used to describe fish species with various characteristics, generally including fish that are small in size and have little or no direct commercial value (Funge-Smith et al., 2005). The FAO (2012) estimates that the total worldwide volume of low-value fish used as feed in aquaculture is approximately 9 million tons. The use of low-value fish as feed is a common husbandry practice in marine fish farms in several countries within the Asia-Pacific region (Funge-Smith et al., 2005). Approximately 90% of the marine fish (e.g., Korean rockfish) cultured in Korea are fed with farm-made aquafeed, whose formulation generally consists of low-value fish mixed with 10–20% (w/w) industrially manufactured compound fish meal feed (Kim et al., 2013). Although accurate information about the exact species of low-value fish used as feed in Korea is lacking, Pacific sand eel Ammodytes personatus and big head croaker Collichthys niveatus are generally recognized as the most common species. In this study, the causal agent of a disease that occurred at a Korean rockfish farm was investigated, including examination for the presence of pathogens in the low-value fish used as feed on the farm. Additionally, a brief literature review was conducted, which indicated that low-value fish and baitfish are disease vectors.

Infected Korean rockfish Sebastes schlegeli (n = 10; weight = ~ 600 g) were sampled in October 2012 from a sea-cage fish farm located in Namhae on the southern coast of Korea. Pacific sand eel (n = 10), which were typically used at the farm as low-value fish for feed, were also obtained. Moribund or freshly dead rockfish exhibiting skin ulcers and hemorrhages in the operculum and on the body surface (Fig. 1) were aseptically dissected, and swabbed materials derived from the kidney and spleen were transferred to brain heart infusion agar (BHIA; Difco, Detroit, MI, USA) containing 1% NaCl to isolate the causal agent. The plates were incubated at 25℃ for 7 d, following a thorough examination for signs of clinical disease. 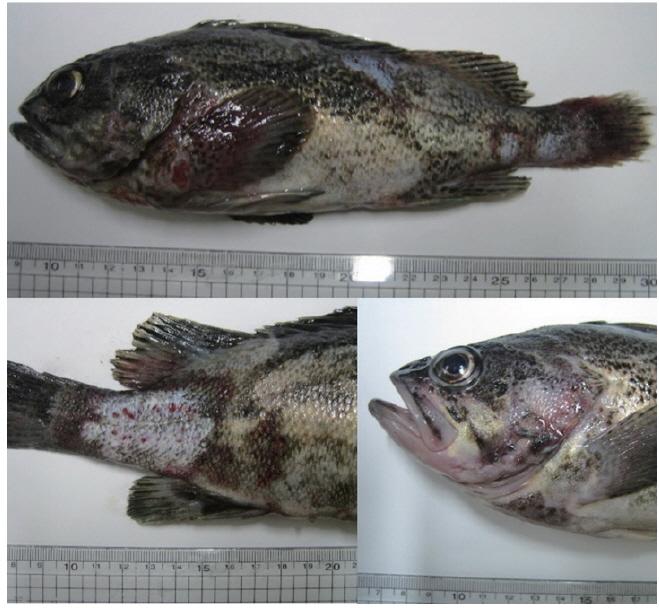 Fig. 1.Clinical signs of Korean rockfish Sebastes schlegeli infected with Vibrio harveyi. Skin ulcers and hemorrhages at the operculum, around the base of the pectoral and pelvic fins and caudal peduncle were commonly observed in most sampled fish.

All sequences were subjected to similarity searches using BLAST, and the closest type strain was determined using RDP SEQMATCH (www.rdp.cme.msu.edu) (Cole et al., 2009). The sequences of all isolates were aligned using the ClustalX software for phylogenetic analysis, and positions 63–779 (Escherichia coli 16S rRNA numbering) were chosen. The neighbor-joining tree was constructed based on Kimura two-parameter distances, and bootstrap analysis of 1,000 re-samplings was performed using MEGA 5 (Saitou and Nei, 1987; Tamura et al., 2011). The accession numbers of representative sequences are presented in Table 1.

Table 1.Asterisks indicate that the isolates (in “Isolate code” and “Accession no.” column) had identical 16S rRNA gene sequences. 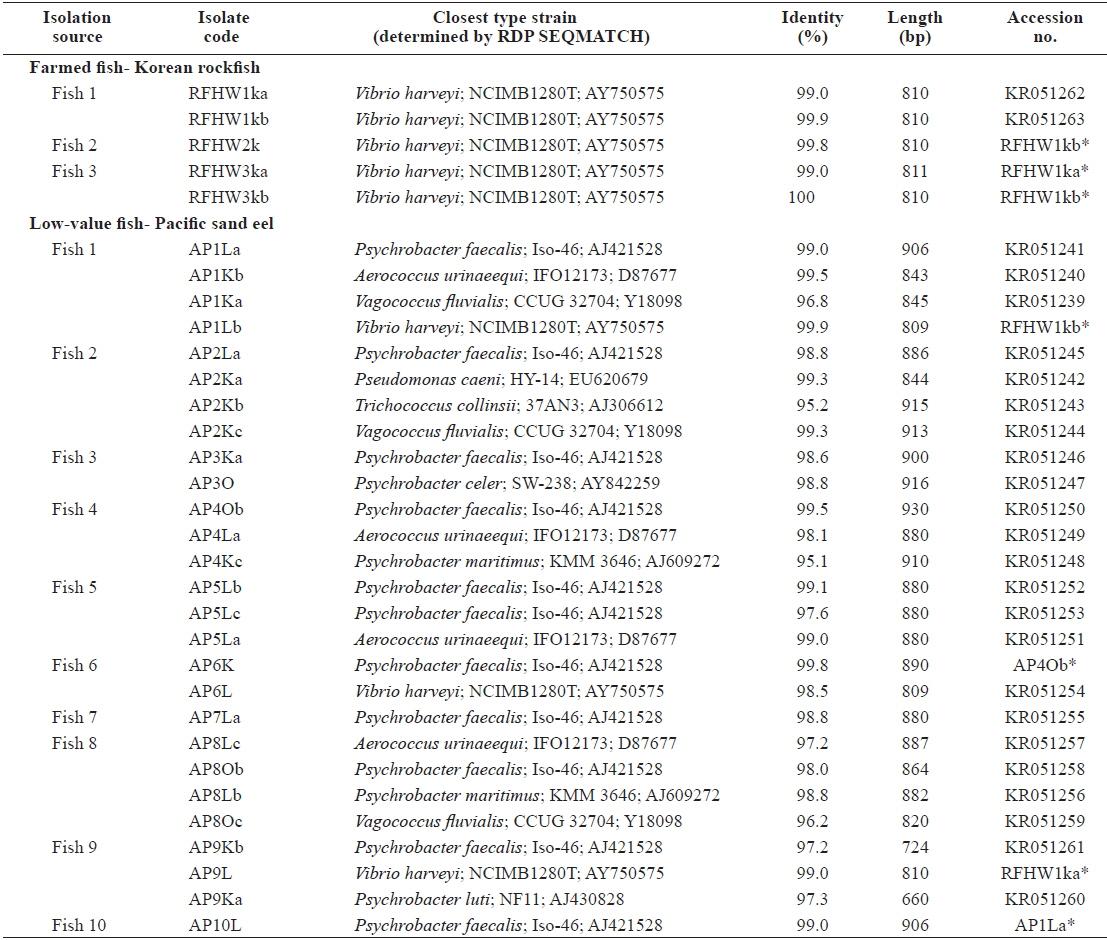 A disc diffusion assay was performed for all isolates and reference strains according to the protocols specified in the CLSI guideline M42-A (CLSI, 2006). All tests were conducted on Mueller–Hinton agar supplemented with 1% NaCl, with incubation at 22℃ for 24–28 h. Eight antimicrobials, including discs containing gentamicin (10 μg), erythromycin (15 μg), florfenicol (30 μg), nalidixic acid (30 μg), oxolinic acid (2 μg), enrofloxacin (5 μg), oxytetracycline (30 μg), and trimethoprim/sulfamethoxazole (SXT) (1.25/23.75 μg) (Oxoid, Cambridge, UK) were used. These are all antibiotics that have been approved for use in aquaculture. Aeromonas salmonicida subsp. salmonicida ATCC 33658 was used as the quality control strain (CLSI, 2006).

The closest type strains to the 32 isolates retrieved in this study and their accession numbers are listed in Table 1. The phylogenetic relationships are presented in (Fig. 2). Psychrobacter spp., including P. faecalis (90%; 9/10), P. maritimus (20%; 2/10), P. celer (10; 1/10) and P. luti (10%; 1/10), were predominantly isolated from the kidney or liver of the frozen Pacific sand eels. In general, Psychrobacter species are primarily isolated from cold to warm saline ecosystems, in samples ranging from chilled meat and fish to clinical samples (Bowman, 2006). Furthermore, a few Psychrobacter species, such as P. maritimus, have been isolated from the intestinal tract of fish (Ringø et al., 2008) and freshwater fish (Gonzalez et al., 2000). However, P. faecalis, which was initially obtained from a bioaerosol originating from pigeon feces (Kämpfer et al., 2002), has not previously been isolated from or associated with disease in fish. Hisar et al. (2002) found that Psychrobacter immobilis caused infection in rainbow trout (Oncorhynchus mykiss), but hypothesized that the species may act as a secondary, not primary, invader, as no mortality was observed for 35 days after challenge. Based on the present and previous studies (Gonzalez et al., 2000; Gennari et al., 1999), it was speculated that Psychrobacter are rarely associated with disease and that this is a common bacterial group that may often be isolated after post mortem storage. Aerococcus urinaeequi (40%; 4/10), Vagococcus fluvialis (30%; 3/10), Pseudomonas caeni (10%; 1/10) and Trichococcus collinsii (10%; 1/10) were also isolated from the kidney or liver of Pacific sand eels at different frequencies. AP2Kb, AP4Kc, and AP8Oc, which were most closely related to T. collinsii, P. maritimus, and V. fluvialis type strains, respectively, are highly likely to be affiliated with different or new phylogenetic groups, as the similarities of their 16S rRNA gene sequences were significantly low (<97%). Although it is difficult to determine why these bacterial species existed in the kidney or liver, we hypothesize that they may not be primary pathogens, but instead are secondary invaders of already-dead tissues and organisms. 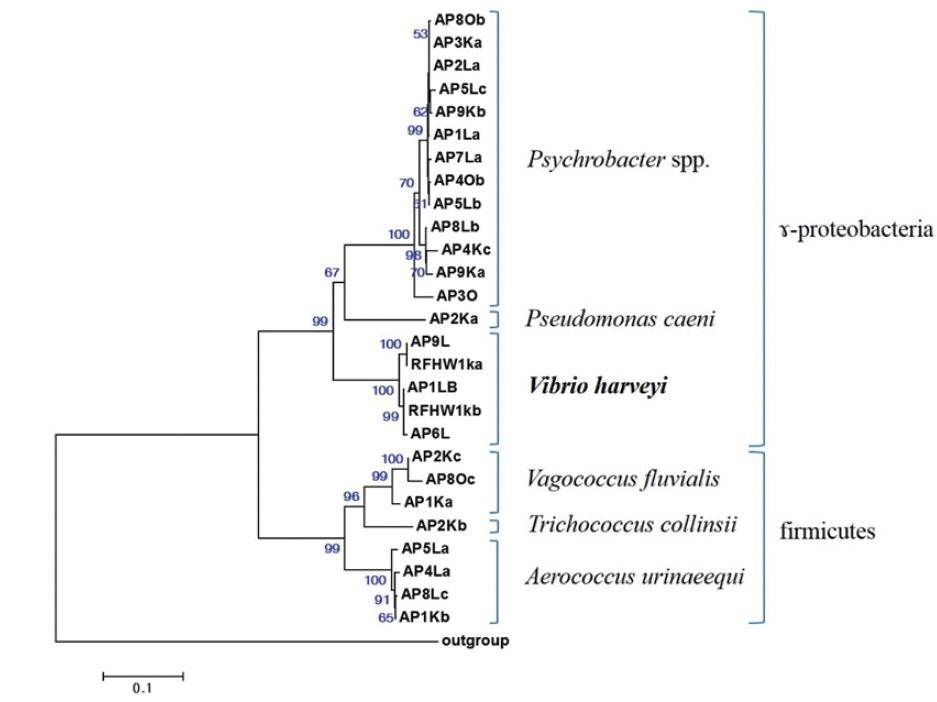 Most of the Korean rockfish sampled in this study displayed skin ulcers and hemorrhaging in the operculum and around the base of the pectoral and pelvic fins and the caudal peduncle (Fig. 1). Most of the bacteria isolated from the fish showed similar colony morphology; thus, five isolates were selected for further examination. The 16S rRNA gene sequences of the five selected rockfish isolates (RFHW1ka, RFHW1kb, RFHW2k, RFHW3ka, and RFHW3kb) and three Pacific sand eel isolates (AP1Lb, AP6L, and AP9L) were found to be most closely related to the Vibrio harveyi type strain, a well-known opportunistic fish pathogen. It was further confirmed that the V. harveyi toxR gene could be specifically amplified from all eight isolates (Fig. 3). Additionally, all isolates that grew well on thiosulfate citrate bile salt sucrose agar (TCBS agar) did not grow at 40℃ or on culture media devoid of the NaCl supplement, which is in agreement with the typical characteristics of V. harveyi (e.g., Lee and Yii, 1996; Won et al., 2007).

The inhibitory zones obtained for the reference strains were within the acceptable ranges specified in the CLSI guideline M42-A (CLSI, 2006). The zone sizes obtained from the V. harveyi isolates are shown in Table 2. The inhibitory zone diameters for gentamicin, tetracycline, and the quinolones of all eight isolates were similar. According to the epidemiological cut-off values (COWT) using the data for 52 V. harveyi strains isolated in Korea, including the eight isolates, and a normalized resistance interpretation analysis (data not shown), RFHW1ka, RFHW3ka, and AP9L were classified as non-wild type for SXT, erythromycin, and florfenicol (indicated in bold type in Table 2). Additionally, RFHW2k was treated as non-wild type for both SXT and erythromycin. RFHW1kb, RFHW3kb, AP1Lb, and AP6L showed almost the same antibiotic susceptibility patterns as those of RFHW1ka, RFHW3ka, AP9L, and RFHW2k.

Vibrio harveyi is a Gram-negative marine bacterium that causes serious penaeid shrimp and fish disease (Austin and Zhang, 2006). Many studies have demonstrated that V. harveyi causes disease in various fish species, such as sea bream (Sparus aurata) (Haldar et al., 2010), wedge sole (Dicologoglossa cuneate) (López et al. 2009), olive flounder (Paralichthys olivaceus), and Korean rockfish (Won and Park, 2008). Vibro harveyi was also observed to be more virulent in Korean rockfish than in other fish species (e.g., olive flounder) (Won and Park, 2008). Although the portal of entry of V. harveyi is not yet fully understood, the gastrointestinal tract may be a key route of invasion, as this pathogen has been isolated from several species with gastroenteritis (Yii et al., 1997; Soffientino et al., 1999; Lee et al, 2002). Notably, in this study, V. harveyi was isolated from three Pacific sand eels (frequency, 30%; 3/10) used as fish farm feed. It is presumed that, unlike the other bacterial species isolated in this study, natural infection by V. harveyi can occur in Pacific sand eel. Hence, use of the eel as a feed in aquaculture could be a source of disease. Although there is no direct evidence for the pathogenicity of the three isolates (AP1Lb, AP6L, and AP9L) to rockfish, they were phenotypically very similar to the rockfish isolates. Nevertheless, these results may not strongly support the supposition that low-value fish was the direct source of vibriosis in this study. However, the use of low-value fish contaminated with or infected by pathogens as feed in fish farms should be avoided due to biosecurity concerns.

In general, the use of baitfish and low-value fish for feed raises the possibility of disease transmission (Gill, 2000; Hardy, 2004; FAO, 2011). Several studies have shown that baitfish or low-value fish pose significant risks for the spread of diseases, as summarized in Table 3 (e.g., Ostland et al., 1987; Rashid et al., 1992; Kim et al., 2007; Gomez et al., 2010; Kim et al., 2013). Low-value fish are often used in close proximity to their source; however, larger numbers of low-value fish captured from the wild are moved and released into new regions far from their origins (Goodwin et al. 2004). Indeed, frozen low-value fish are of particular concern, given evidence that freezing is insufficient to inactivate all of the viruses and bacteria present in infected fish (Arkush et al. 1998; Hervé-Claude et al. 2008; Kim et al., 2013). Thus, as described previously by Hyatt et al. (1997) and Ward et al. (2001), imported frozen whole feed fish could play an important role as a vector for the introduction and spread of exotic diseases. In light of this, many countries have restricted the use of low-value fish in fish farming activities. For example, the use of low-value fish is prohibited in Denmark, and fish farms have been forced to switch to formulated feeds. Re-feeding of salmon to the same species (intra-species recycling) is also banned by law in Norway and Chile (FAO, 2006). Finfish aquaculture activities in Korea still depend too much on low-value fish feed, so serious biosecurity concerns continue to exist in the country. Therefore, the introduction of new regulations to ban the use of whole low-value fish (containing internal organs) on Korean fish farms may be needed in the near future to ensure the sustainability of aquaculture, as well as protect the natural environment. Furthermore, as low-value fish or baitfish imported into Korea are not a designated quarantine item under current Korean law, legislation to require inspection of the imported fish to be used as aquaculture feed by a competent authority should be urgently introduced to minimize the occurrence of exotic diseases.