The Korean Institute of Broadcast and Media Engineers (한국방송∙미디어공학회)

High Efficiency Video Coding (HEVC)/H.265 is a new video coding standard which is known as high compression ratio compared to the previous standard, Advanced Video Coding (AVC)/H.264. Due to achievement of high efficiency, HEVC sacrifices the time complexity. To apply HEVC to the market applications, one of the key requirements is the fast encoding. To achieve the fast encoding, exploiting thread-level parallelism is widely chosen mechanism since multi-threading is commonly supported based on the multi-core computer architecture. In this paper, we implement both the Tile-level parallelism and the Frame-level parallelism for HEVC encoding on multi-core platform. Based on the implementation, we present two approaches in combining the Tile-level parallelism with Frame-level parallelism. The first approach creates the fixed number of tile per frame while the second approach creates the number of tile per frame adaptively according to the number of frame in parallel and the number of available worker threads. Experimental results show that both improves the parallel scalability compared to the one that use only tile-level parallelism and the second approach achieves good trade-off between parallel scalability and coding efficiency for both Full-HD (1080 x 1920) and 4K UHD (3840 x 2160) sequences.

High Efficiency Video Coding (HEVC) [1,2] is a new video codec which was finalized in January 2013. HEVC is known to provide two times higher compression ratio than the previous video coding standard, which is promising to the multimedia industry. As the electronics industry pushes the large display products and consumers pursuit the high resolution video contents, broadcast community and other key players in the video market have taken the fast action to applying the HEVC codec to deliver advanced services. Due to achievement of high efficiency, HEVC sacrifices the time complexity. To apply HEVC to the market applications, one of the key requirements is the fast encoding [3] . To achieve the fast encoding, exploiting thread-level parallelism is widely chosen mechanism since multi-threading is commonly supported based on the multi-core computer architecture. In HEVC, there are several picture partition schemes such as slices, tiles [4] , and wavefront parallel processing (WPP) [5,6,7] . Since the slices result larger coding loss compared to tiles, we consider the tile scheme for picture partitioning parallelism in this paper.

In HEVC the picture partitioning parallelism structure is supported as called Tile; a picture is divided into squares and encoded independently. There is no dependency between the tiles so that the several tiles can be encoded in parallel. However, the neighboring blocks at the tile boundary cannot be referenced while encoding, the encoding efficiency is decreased. We have implemented the Tile-level parallelism based on HEVC test model (HM) encoder. Since the HM encoder is single-core codec, the multiple tiles are encoded in serial and use a single CABAC engine. We parallelize multiple tile encoding with each independent CABAC engine. 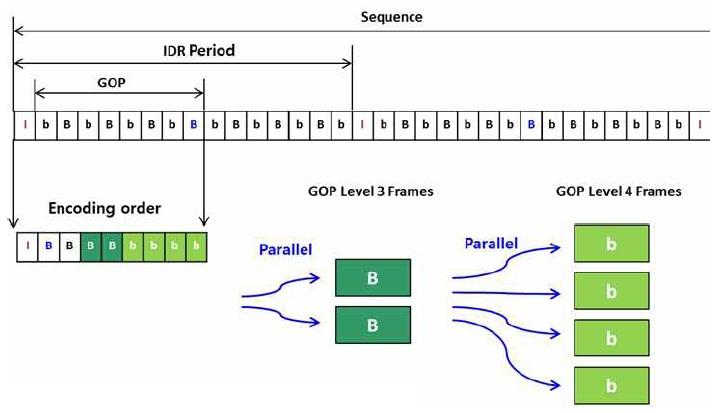 HEVC allows the tile number up to 25 for full HD video (1920 x 1080) and 110 for 4K UHD video (3840 x 2160). The recent multi-core architecture technique has improved significantly so that many systems have high number of cores. Employing more than two parallelism schemes improves the parallel scalability. Based on the implementation of tile-level parallelism and frame-level parallelism, we combine the two parallelisms to improve the parallel scalability and to more effectively utilize the multi-core system.

1. Combined Approch 1: Fixed number of tile in a frame

The combined approach 1 illustrated in Fig. 4 has some shortage. When the frame-level parallelism is employed, the number of tiles in parallel is increased by factor of the number of frames in parallel. The unbalanced number of worker threads through the encoding timeline results in difficulty in effectively running multi-threading.

2. Combined Approach 2: Adaptive number of tile in a frame

We implemented our parallel encoding approaches described so far based on HEVC reference software. Multithreading has been applied using Windows threads APIs. The test sequences used in the experiment are two set of video. The first set has five Full-HD (1920 x 1080) videos of 100 frames (Kimono, Park Scene, Cactus, Basketball Drive, and BQ Terrace), which are from HEVC test sequences. The second set has five 4K UHD (3840 x 2160) videos of 100 frames (Jockey, YachtRide, ReadySteadyGo, ShakeNDry, and HoneyBee), which are from Kvazaar Encoder[11,12] test sequences. We used the separate platforms according to the test sequence resolution. The platform used for Full-HD test set has one Intel Xeon E5-2690 processor with eight physical cores whereas the platform for 4K UHD test set has two Intel Xeon E5-2690 processors with sixteen physical cores in total. For speedup measurement, the sequences encoded with one tile per frame in serial are used as the anchor. We select Main profile and HEVC common condition random access setting with two modifications: The GOP structure is changed as Fig. 2 to encode the frames in the level 3 in parallel and the encoding tool of AMP is not applied. 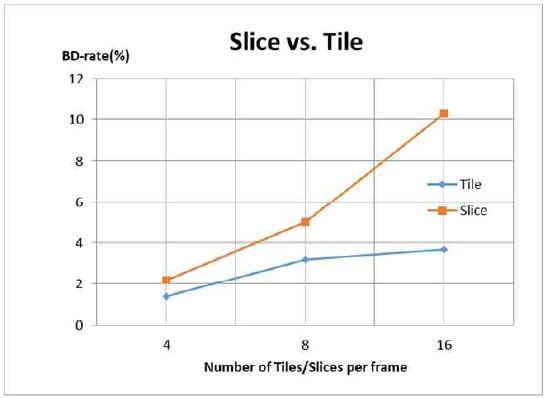 When designing the encoding parallelism, we carefully consider the trade-off between the speedup and coding efficiency. From our experimental results, we aggregate the speedup results against coding loss for each parallelization scheme as shown in Fig. 8. Both Combined Approach 1 and 2 are better parallel scalability compared to the Tile-level parallelism. Combined Approach 2 parallelism shows better speedup against the coding loss for Full-HD and 4K test sequences. In addition, the comparison of speedup between the combined approach 2 and the tile-level parallelism shows the similar pattern as Fig 9 no matter what number of physical core. However, the speedup scalability according to the number of available core is different. The speedup scalability decreases as the number of cores increases. This performance decrease causes from the inefficient parallelization such as frame synchronization.