The Korean Society of Phycology (한국조류학회(藻類))

Screening and identification of bioorganic light-emitting substances from marine macrophytes

The history of displays begins with early cathode-ray tubes, moving on to the first and second generation of liquid crystal displays (LCDs), and finally reaching the current generation of organic light-emitting diode (OLED) devices (Wong and Ho 2009). The OLED is a self-emitting form, and improvements have resulted in an improved viewing angle and outstanding performance with thin layers. The device is a simple one, and power consumption has been greatly improved over time. However, shortages of materials and problems relating to device life expectancy have yet to be solved satisfactorily. South Korea is a current leader, alongside the United States and Japan, in terms of the number of patent registrations relating to OLEDs. However, with regard to the materials used to produce OLEDs (a core technology), South Korea has only 14% of all such patents, and so room for expansion exists with respect to OLED display technology (Ministry of Science and Technology 2006).

The limitations of present OLED technology lie in the emission of light. The light-emitting materials used may affect the lighting field as well as the display field. For example, the green-colored light emitted by Alq3 is the most commonly used light-emitting material (Hall and Schlegel 2001). However, although blue light-emitting materials with chemical stability, low color purity, and high flexibility exist, these tend to show whitening. Red light-emitting materials can reach a wavelength of 650 nm, but their emitting capabilities are less than ideal for industrial use (Seo and Moon 2014). Previous studies have investigated the optical and semiconducting properties of OLED materials (Karakawa et al. 2007, Sasabe et al. 2008) and were undertaken to find a way to avoid the dependence on the current range of OLED materials. In the present study, we used substances derived from living organisms to solve this problem. We required the light-emitting substance to be solid at room temperature, contain a benzene ring within its structure, have a range of molecular weights from 100 to 500 and a range of melting points above 100°C, and show little or no reaction with moisture (Karakawa et al. 2007, Sasabe et al. 2008). To examine the efficiency of LEDs, photoluminescence (PL) spectra were used to measure the bandgap from the full valence band to the empty conduction band, and to examine the basic characteristics and optical properties of the derivatives (Karakawa et al. 2007).

Among marine organisms, algae are a well-known source of novel substances, such as proteins, fatty acids, vitamins, and pigments (Volk 2008). They also produce a wide variety of secondary metabolites with different bioactivities (e.g., antifungal, antiviral, antibiotic). Algae also have potential for pharmaceutical research. In addition, those marine organisms that produce novel organic compounds are of particular interest.

This study was undertaken to identify bio-light-emitting materials and to estimate the efficiency of the light emission using the PL spectra. We derived the diverse functional organic light-emitting substances from marine macrophytes.

Marine macrophytes were collected around the coastal areas of Ganjelgot in Ulsan City, Nameri in Gangneung, and Aewol in Jeju, South Korea. Materials were identified morphologically based on the “Marine Algae of Jeju” by Lee (2008) and Silva et al. (1996), Yoshida (1998) and Schneider and Wynne (2007) were used for further identification. The species of marine macrophytes examined comprised 5 Chlorophyta, 13 Phaeophyta, and 10 Rhodophyta (Table 1). 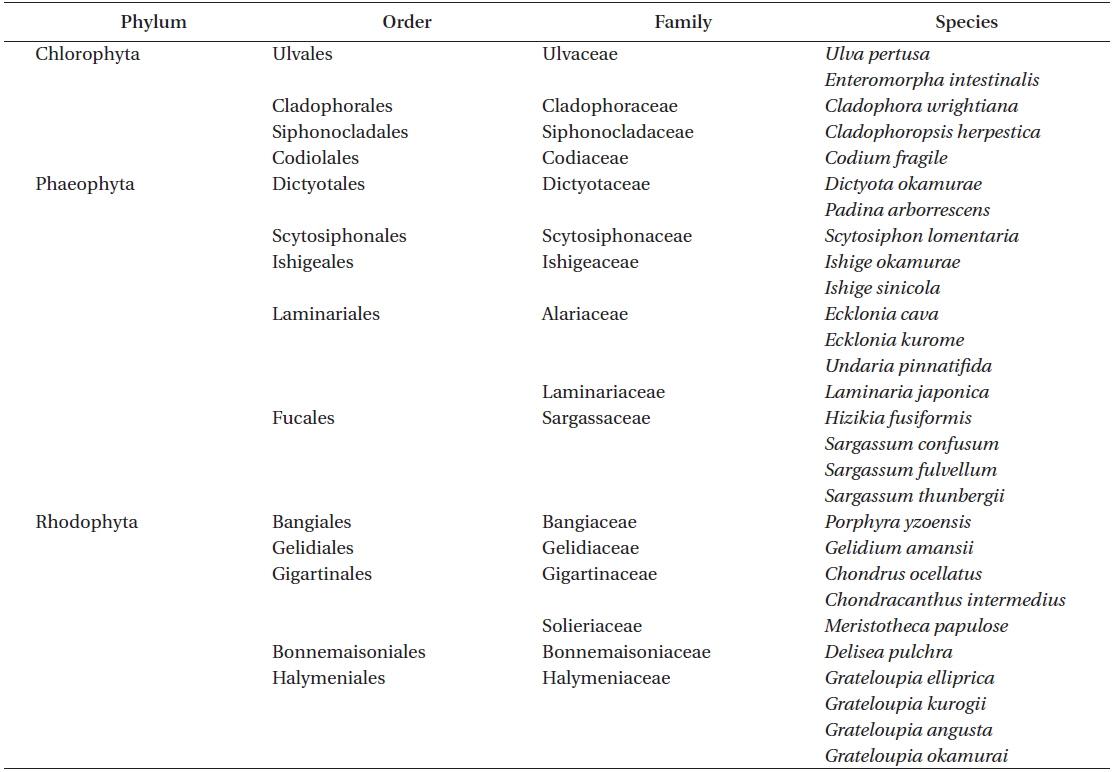 The collected marine macrophytes were rinsed, dried at room temperature, and then powdered. Each of the 100-g samples was powdered and extracted using 1,000 mL of 100% methanol (MeOH) over 25 h at room temperature. After filtration, the crude extract was concentrated to give a dark-green tar-like sticky residue (10 g) under reduced pressure in an evaporator, and then the MeOH extraction was purified by column chromatography using a Pyrex glass column (diameter : length = 24 : 40 cm) charged with a silica gel 60 (70 g). Elution was performed with a toluene and ethyl acetate in the following ratio: 7 : 3 in sequence. Fractionations were monitored by thin layer chromatography. Fractions of candidate organic compound materials were used to examine the samples in terms of their PL spectra, and promising candidates were selected based on their light-emitting properties.

Gas chromatography–mass spectrometry (GC-MS) analysis was performed using a Shimadzu GC MS-QP 2010-Plus (Shimadzu, Kyoto, Japan) and a 30 m × 0.25 mm × 0.25-μm Rtx-5MS capillary column (Shimadzu). The helium carrier gas was supplied at a head pressure of 35 psi to provide an initial flow rate of 1 mL min-1. The temperature of the split injector was 260°C and the split ratio was 1 : 50. The injection volume for the fraction samples was 1 mL. The GC oven was maintained at 60°C for 3 min and then programmed at 100°C (2 min hold), followed by 200°C (5 min hold) and finally 235°C (10-min hold). Fullscan mass spectra were collected from m/z 85 to 550 at a data acquisition rate of 10 spectra s-1. The MS transfer line was held at 250°C and the ion source temperature was 200°C. The electron energy was 70 eV. Isolated peaks were identified by comparison with the National Institute of Standards and Technology Library (Gaithersburg, MD, USA).

The selected purified substances were examined in terms of their PL spectra using the apparatus shown in Fig. 1. The substances were exposed to UV radiation at 365 nm in a 1-mL crystal cuvette, and PL reactions were initiated. The CS-1000 spectra were used to measure the chromaticity, brightness, and light emission of the samples (Fig. 1). 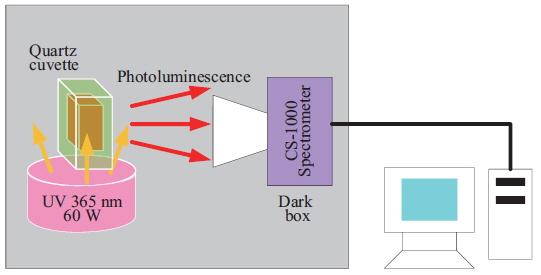 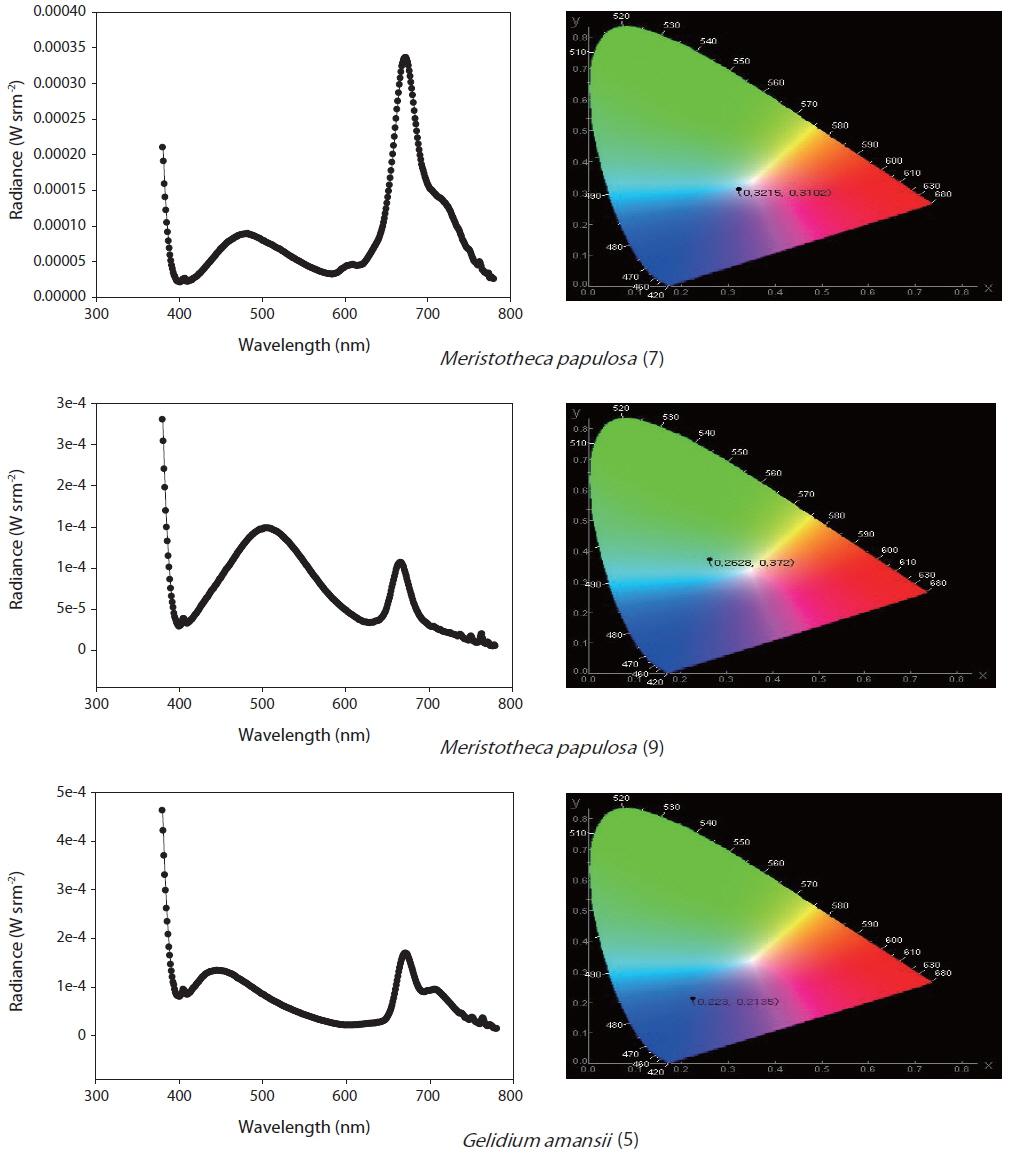 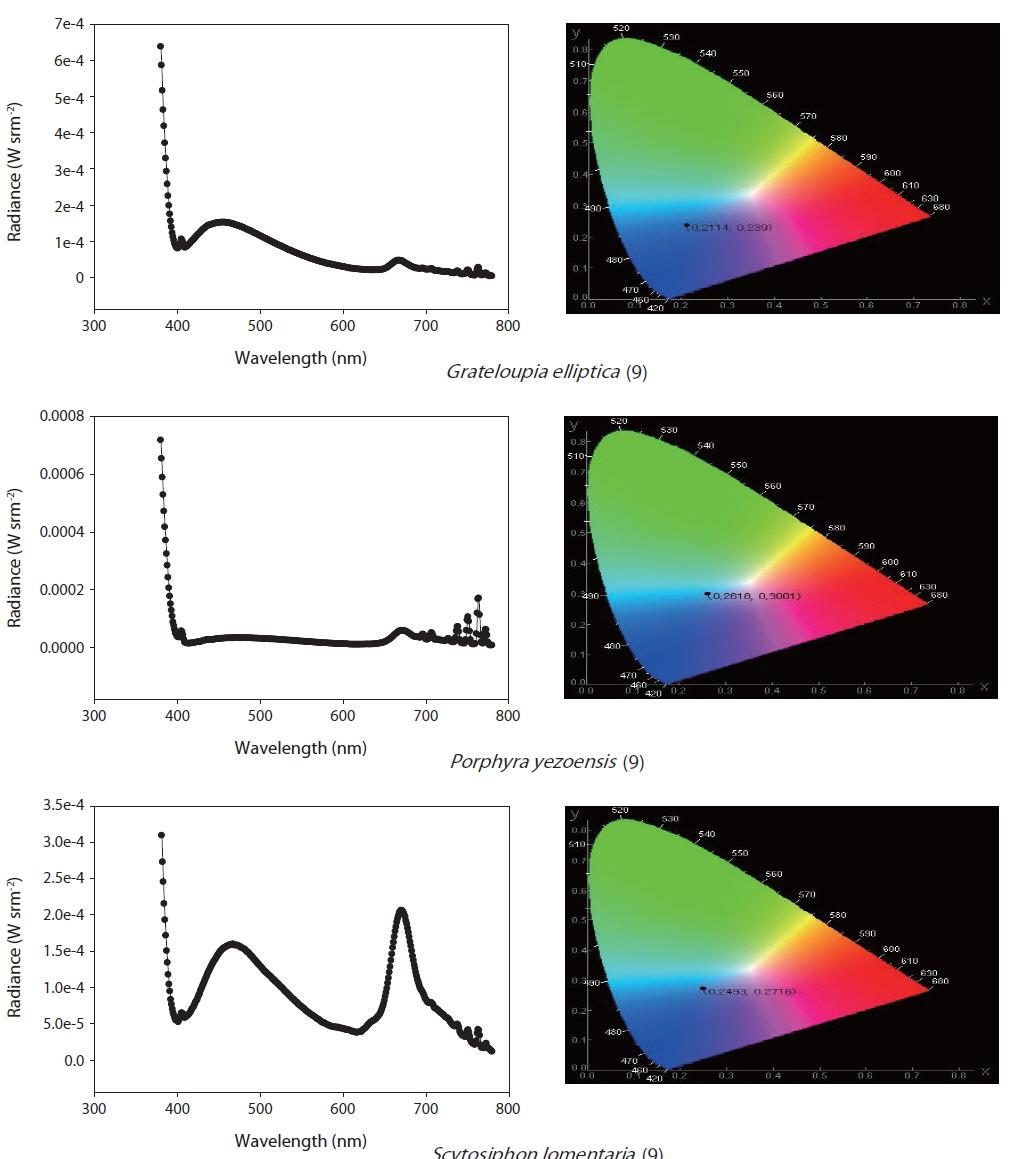 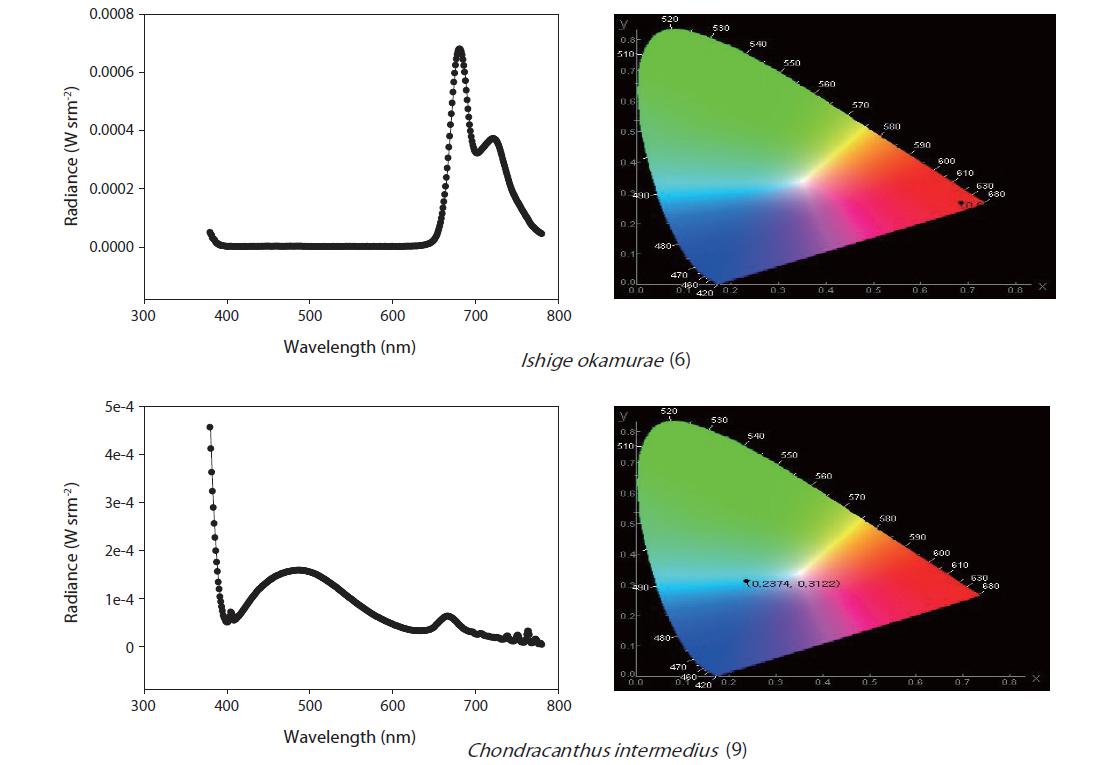 Choi et al. (2001) reported on an OLED device consisting of a single layer of chlorophyll a and aluminum, with a coating of chlorophyll a using the Langmuir-Blodgett method. The OLED efficiency and thickness of the chlorophyll coating both increased. However, chlorophyll a is not used in commercial OLEDs because its chemical bonds break down with heat, and also the high costs associated with its commercial use. Chlorophyll a has a blue irradiance of electroluminescence from 300 to 400 nm, with low red band wavelengths and a tetrapyrrole ring with magnesium atoms in the porphyrin at its center. A great deal of research has investigated its PL properties. Chlorophyll a emits mainly at 380-400 and 660-800 nm, and its maximum emission wavelengths have been found to show a brightness of 1.16 cd m-2 at 373 and 668 nm.

Generally, higher plants and animals, fungi, and yeast have cytochrome c as part of the electron transport system within their mitochondria. Reductive sulfate protein absorbance bands appear at 550, 520, and 415 nm, while an oxidative protein has an absorbance band at 407 nm. Tajima et al. (2006) reported on the use of cytochrome c in an OLED coating plate.

To determine the methods for OLED candidate PL measurements, Alq3 is a commercially available light-emitting material with a known spectrum and chromaticity coordinates. Its PL spectrum is in the range of 480-700 nm, its luminance is 18.66 cd m-2 , and the maximum emission wavelength was found to be 531 nm in primary examination (Shin 2013). Furthermore, commercial N,N'-bis-(1-naphthalenyl)-N,N'-bis-phenyl-(1,1'-biphenyl)-4,4'-diamine (NPB) PL spectrum and color analysis chromaticity coordinates are available and can be used as a representative material with benzene rings and two amines. NPB shows a 400-700 nm PL spectrum, broad emissions with green and blue chromaticity coordinates, and color purity. The luminance is 10.15 cd m-2 and the maximum emission wavelength is 488 nm. Chitosan PL spectra and chromaticity coordinates (reference material) are also available. Chitosan is derived from crustacean shells and has been assessed as an OLED material, but requires a high purity. Unlike other substances, it emits from 380 to 400 nm (blue), showing high color purity up to 0.59 cd m-2 and a maximum light emission wavelength of 380 nm.

In this study, we described the identification and physical properties of functional bio-light-emitting materials from marine macrophytes. The compounds were first identified as functional bio-light-emitting materials. In total, 16 solvent fractions were selected and confirmed by the PL reactions, and structures and material properties were analyzed for candidate substances by GC-MS. Fourteen bio-light-emitting materials identified from the 16 solvent fractions potentially contained OLED materials from 28 strains of marine macrophytes. Many benzene derivatives were identified, including benzylisopentyl ether, isopropyl phenylacetate, 1,1-diphenyl-3-[methoxymethoxy]-1-butene, benzene acetic acid, benzamide, 4-methyl-2,4-bis[4'-trimethylsilyloxy-phenyl]pentene-1, and trimethyl[4-[1,1,3,3,-tetramethylbutyl] phenoxy]silane benzamide. In addition, two fluorine compounds, 9H-fluorene-2-carboxylic acid and 8,9,9,10,10,11-hexafluoro-4,4-dimethyl-3,5-dioxatetracyclo[5.4.1.0[2,6],0[8,11]]dodecane, were recognized. One amine, carbamic acid, was discovered in G. elliptica. Two solvent fractions of M. papulosa showed purple and seagreen PL reactions. The solvent fraction of G. amansii exhibited maximum light emissions at 380-400 and 600 nm, similar to chlorophyll a but with a dark-blue color. The maximum light emissions shown by G. elliptica were at 380-400 and 430-500 nm, while those of P. yezoensis were at 390-400 and 680-800 nm with a blue color. S. lomentaria exhibited maximum light emissions at 380-400 and 680-700 nm. I. okamurae (Rhodophyta) and C. intermedius showed maximum light emissions at 440-520 nm, the color of which was between blue and green based on chromaticity coordinates.

In conclusion, marine algae were screened to discover new OLED material candidates. As an example, we extracted the red alga G. amansii with an organic solvent system and confirmed the active fraction using PL methods and characterized the bio-light-emitting materials by GC-MS analysis. The OLED candidates identified in this study should be studied further with a view to improving their emission efficiencies.