The Korean Society of Phycology (한국조류학회(藻類))

Recent studies have shown the importance of viruses as potential sources of plankton mortality, which affect primary production and biogeochemical functions of their hosts. Here, we report basic characteristics of a novel virus (Stephanopyxis palmeriana virus: SpalV) that causes lysis of a culture of the diatom S. palmeriana, which was isolated in Jaran Bay, Korea, in August 2008. SpalV is a round-shaped viral particle ~25-30 nm in diameter that propagates in its host's cytoplasm. In addition, it shows species-specific infectivity among the tested diatom species. The burst size and latent period are estimated to be roughly 92 infectious units and <80 h, respectively.

Seawater contains diverse organisms and viruses that infect their host, with ~105-109 virus particles in 1 mL of seawater (Suttle et al. 1990, Suttle 2007). The majority of these viruses infect bacteria, cyanobacteria, archaea, and other eukaryotic organisms, but some of these viruses infect macro- or microalgae. These algal viruses are known to play an ecologically important role in regulating the population dynamics of their phytoplankton hosts (Suttle et al. 1990, Bratbak et al. 1993). Over 50 different viruses or virus like particles (VLPs) infecting marine eukaryotic algae have been isolated and characterized during the last two decades (Van Etten et al. 1991, Nagasaki and Bratbak 2009, Wilson et al. 2009).

Among the primary producers in aquatic ecosystems, diatoms comprise a major group of algae and are the most common phytoplankton. More than 105 species of diatoms are estimated to exist, which account for up to 35-75% of marine primary production in the ocean (Smetacek 1999). Therefore, lysis of these species by virus infection can reduce primary production. For example, the inoculation of phytoplankton communities of several major algal species with viral concentrates from seawater reduced primary production by as much as 78% (Suttle et al. 1990, Suttle 2007).

Despite the potent roles of diatoms and viruses infecting these hosts in aquatic ecosystems, few studies have examined diatom viruses. Since the first diatom virus was, at least nine diatom viruses have been isolated (Tomaru et al. 2011a, 2011b, 2011c). Although all of these diatom viruses are small icosahedral viruses of 22-38 nm diameter, these diatom viruses are now represented by two recently approved virus genera, namely, Bacillarnavirus and Bacilladnavirus (International Committee on Taxonomy of Viruses, http://talk.ictvonline.org/), as well as several uncategorized members. The genera Bacillarnavirus and Bacilladnavirus are composed of diatom viruses with a linear single-stranded RNA (ssRNA) genome and a circular single-stranded DNA (ssDNA) genome, respectively. Some diatom viruses have a genome type or structure that has not been well characterized. All diatom viruses specifically lyse their respective host diatom species and therefore are thought to represent an important control agent for the dynamics of their respective host population (Avrani et al. 2012).

Seawater samples were collected at Jaran bay, Korea, between May and October 2008 and prefiltered through 0.8 µm pore-size polycarbone filters (Nuclepore, Pleasanton, CA, USA). The logarithmic phase cultures of Stephanopyxis palmeriana (Fig. 1B) were challenged with the seawater samples filtered through 0.8 µm pore-size polycarbone filters (Nuclepore) and incubated under the condition mentioned above. Then, to confirm the virus particles, the S. palmeriana cultures were checked with the lysate filtered through 0.2-µm-pore-size Dismic-25cs filter (Advantec, Charlotte, NC, USA) Screening and cloning procedure was almost according to the method of Tarutani et al. (2001). In total, 100 mL of S. palmeriana logarithmic-phase cultures was inoculated with 20 mL of filtered seawater and incubated under the same conditions described above. 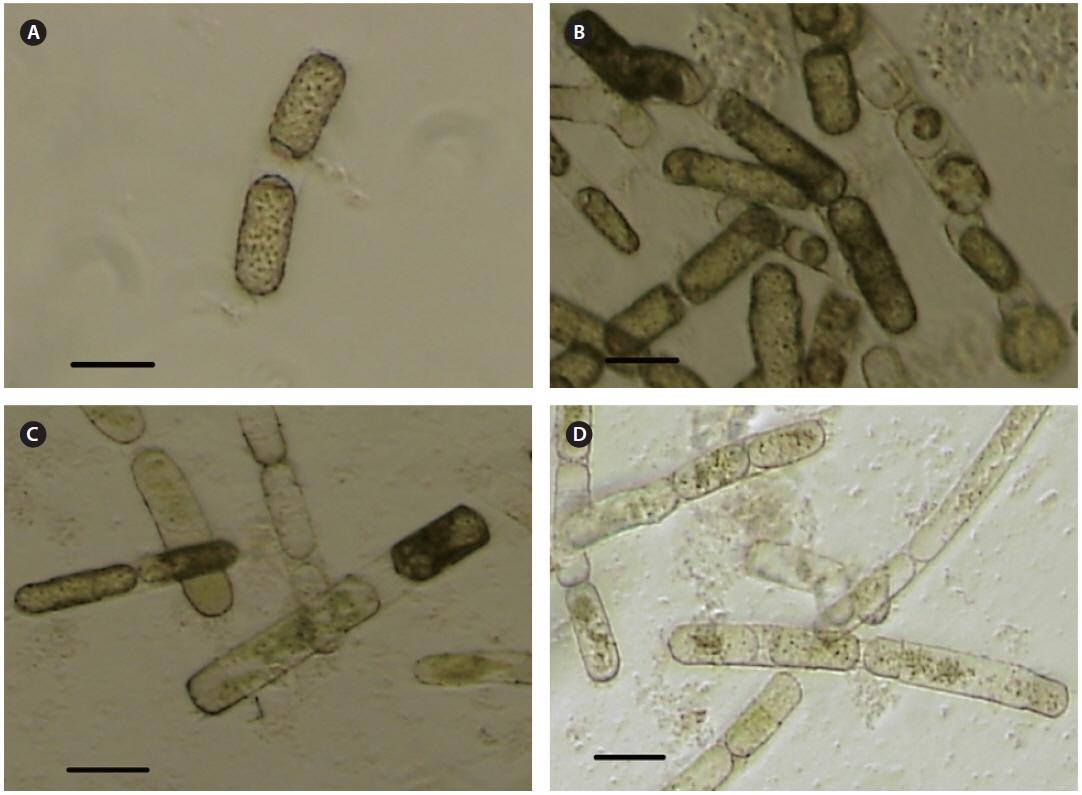 Cultures containing 500 mL of exponentially growing host cells were inoculated with 20 mL of lysate containing SpalV at a viral titer of 3.0 × 106 estimated by the most probable number; cell density and virus titer were then respectively measured using light microscopy and the extinction dilution method (Tarutani et al. 2001) every 24 h until 120 h postinoculation (hpi) (Fig. 2). And the host range of SpalV was examined by adding 50 µL of the original pathogen suspension to each 1 mL culture of exponentially growing algal strains listed in Table 1. Each culture was incubated under the culture conditions described above and observed under a light microscope.

Fig. 2.Multiplication of Stephanopyxis palmeriana virus (SpalV) in inoculated hosts. (A) Changes in host cell numbers with (●) or without (○) inoculation of SpalV. (B) Virus titer in the inoculated culture was calculated using the extinction dilution method. 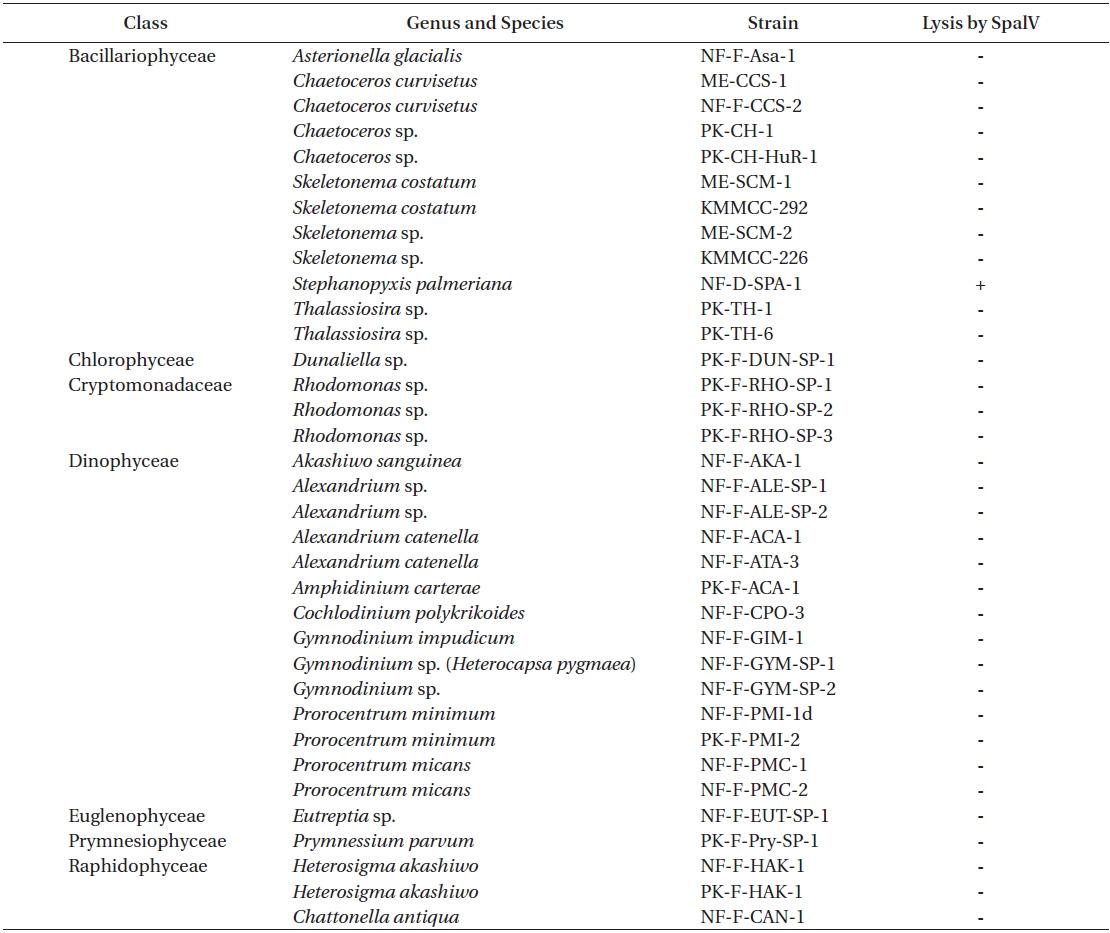 The morphology of SpalV was observed using a TEM. S. palmeriana cultures were inoculated with SpalV, samples (10 mL) were collected at 0, 24, 48, 72, 80, and 92 hpi, and fixed with 1% glutaraldehyde in f/2 for 2 h at 4°C. Cells were harvested by centrifugation at 3,000 rpm for 20 min, and then post-fixed for an additional 1 h with 2% osmium tetroxide at 4°C. Following two rinses with phosphate buffered saline buffer, the pellet was dehydrated in a graded ethanol series (20-100%) and embedded in Poly/Bed 812 resin (Polyscience, Inc., Warrington, PA, USA). Thin sections were stained with 4% uranyl acetate and 3% lead citrate, and observed using a TEM (JEOL JEM-1010; Jeol, Tokyo, Japan) with an acceleration voltage of 60 kV.

The VLPs were also observed in negative staining with 4% uranyl acetate using a transmission electron microscope. Briefly, a drop of purified virus suspension was mounted on a grid for 30 s, and excess water was removed using filter paper. Then, a drop of 4% uranyl acetate was mounted on the grid for 10 s, and removed using filter paper. After the grid was dried, the grids were observed using TEM with the same conditions as above. Particle diameters were estimated using the negatively stained images.

The effect of storage temperature on SpalV infectivity was examined according to the method of Tomaru et al. (2005). An exponentially growing culture of S. palmeriana was inoculated with the virus and incubated for 7 days. Then the resultant lysate was sequentially passed through 0.8-µm and 0.22-µm filters to remove cell debris. The titer of the fresh lysate estimated using the extinction dilution method was 2.6 × 107 infectious units mL-1. Aliquots of the lysate were stored at 20, 15, 4, and -196°C (liquid nitrogen) under light or dark conditions with or without 10 or 20% dimethyl sulfoxide (DMSO) as cryoprotectant, and re-titrated using the extinction dilution method.

Cultures and cells of S. palmeriana were lysed by the filtrate and became pale in color, presumably due to the loss or degradation of photosynthetic pigments. Incubation with the viral lysate caused complete lysis of host cultures within 1 week, in contrast to the controls, which remained healthy (Fig. 1A-D). Further cloning of the virus strain was performed according to the method of Tarutani et al. (2001), and the isolated virus was named Stephanopyxis palmeriana infecting virus (SpalV).

SpalV was not lytic to any microalgal species tested other than S. palmeriana; moreover, it was not lytic to other diatom strains including Chaetoceros or Skeletonema (Table 1). Many algal viruses are reportedly not only “species-specific,” but also “strain-specific” (Tomaru et al. 2008). However, the strain-specific infectivity of SpalV could not be accessed because of the limited availability of Stephanopyxis strains. 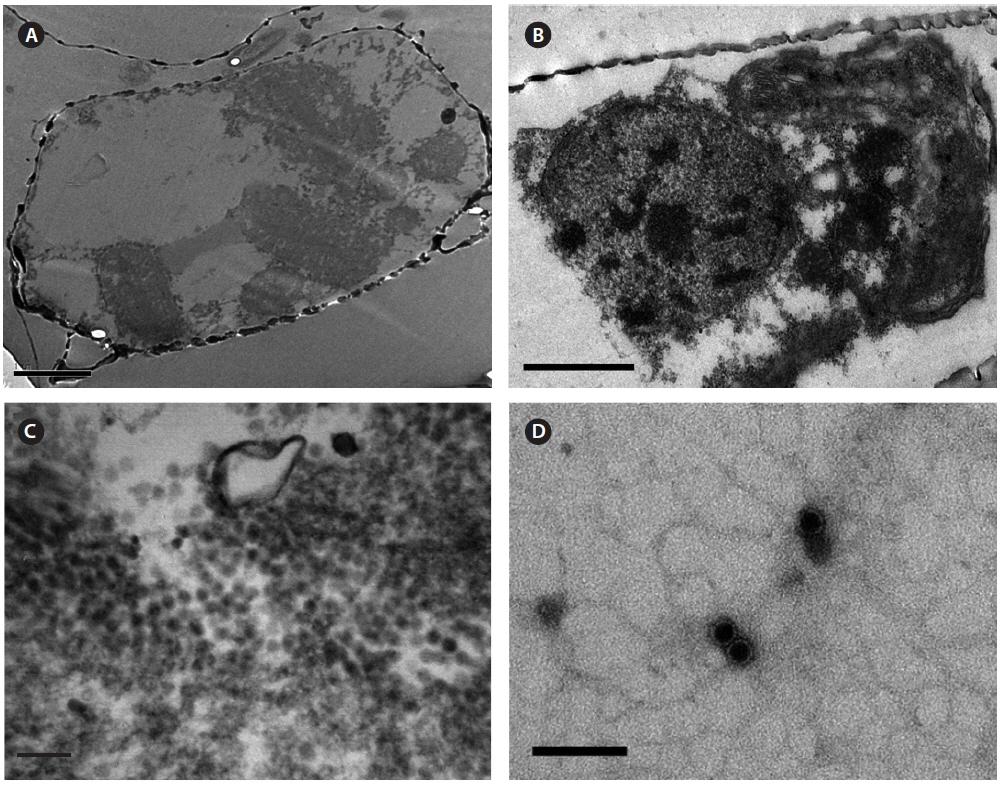 After 1 month of storage at 4, 15, and 20°C in the dark, the estimated titers were 7.02 × 104 , 1.9 × 104 , and 5.1 × 103 infectious units mL-1, respectively, but were below the detection limit (<3.0 × 10 infectious units mL-1) after 3 months of storage at each temperature. The decrease in infectious titers has been also reported for other microalgal viruses such as Chatoceros tenuissimus virus (CtenRNAV) and Chaetoceros socialis virus (CsfrRNAV), which showed considerable decay even under cold and dark conditions (Shirai et al. 2008, Tomaru et al. 2009). Based on these results, significant loss of infectivity may occur in natural environments. Cryopreservation conditions for SpalV were optimized similar to the methods of Nagasaki and Yamaguchi (1999) and Tomaru et al. (2005); the highest remaining titers (7.02 × 105 infectious units mL-1 or 72%) after 1 month of storage were recorded when the viral suspension was preserved in liquid nitrogen (-196°C) with 10% DMSO as cryprotectant (initial concentration = 100%; Merck, Darmstadt, Germany).

Based on previous reports, we know that phytoplankton viruses smaller than 40 nm in diameter typically contain ssRNA genomes and are related to viruses from the highly diverse picorna-like superfamily (Culley et al. 2003). These are the cases for the ssRNA virus previously found in a diatom (Chaetoceros socialis) (Tomaru et al. 2009), the ssRNA virus infecting the raphiophyte Heterosigma akashiwo (Tai et al. 2003), and the ssRNA virus of the dinoflagellate Heterocapsa circularisquama (Tomaru et al. 2004). A dsRNA virus ranging from 65 to 80 nm in diameter was recently shown to infect the prasinophyte Micromonas pusilla (Brussaard et al. 2004). On the basis of virion morphology, it is possible that SpalV is genetically related to ssRNA viruses; however, further work is needed to characterize it genome type and size.

Viruses are thought to influence community composition through increased infection of competitively superior host species that are abundant and are fast growing (Sandaa 2008). Although we do not have sufficient data to determine the roles of viruses in marine environments or in host population dynamics, the interaction between Phaeocystis pouchetii and the lytic virus PpV01 in laboratory microcosms and the ecological relationship between the bloom-forming dinoflagellate Heterocapsa circularisquama and its infectious virus, HcRNAV, provide a rational explanation of the role of viruses in dynamics of host algae (Nagasaki et al. 2003).

We have reported basic characteristics of a novel virus (Stephanopyxis palmeriana virus, SpalV) that causes lysis of a culture of the diatom Stephanopyxis palmeriana, which was isolated in Jaran Bay, Korea, in August 2008. SpalV is a round-shaped viral particle ~25-30 nm in diameter that propagates in its host’s cytoplasm. In addition, it shows species-specific infectivity among the tested diatom species and the burst size and latent period are estimated to be roughly 92 infectious units cell-1 and <80 h, respectively.

To the best of our knowledge, this is the first report of a diatom virus infecting and lysing S. palmeriana which seasonally bloom occurring in Korean coastal water. The roles of viruses in marine environments or in host population dynamics remain unclear, and detailed ecological observations and analysis of both host and viral genetic information are required to fully elucidate their ecological niches.

Grant : Fundamental study on the practical use of eco-friendly removal materials of HABs