In recent years, the growing prospect of the electric power industry in a green and eco-friendly manner has gained much attention. Vacuum circuit breakers (V.C.B.s), which use vacuum as an insulation medium, are replacing gas circuit breakers (G.C.B.s) for use in medium-voltage-class power interception [1-3].

Switch actuators for V.C.B.s typically use spring, solenoid, or permanent magnetic actuator (P.M.A.) mechanisms, and medium-voltage-class V.C.B.s have been using spring-driven mechanism for decades. Such mechanisms, however, have drawbacks including complicated structures, reliance on periodic maintenance, and proneness to oil leaks. P.M.A.s, by contrast, have advantages in terms of simpler structure, improved operating time, easy motion control, and high reliability. Accordingly, manufacturers seeking to reduce the V.C.B. size and to improve the operating time have begun to prefer P.M.A. over spring-driven mechanism [4, 5].

Fig. 1 shows the structure of the P.M.A. developed for use in a V.C.B. It has four important electromechanical components: the permanent magnets (P.M.s), a movable plunger, trip coils, and static yokes. When an excitation current is supplied through the trip coil, the plunger moves upwards or downwards. The mechanical energy generated due to movement of plunger is transmitted to a vacuum interrupter (V.I.). When the plunger reaches fully open or closed position, it stops to be held still by P.M.s only. The P.M.s, which together with the trip coil compose the P.M.A., are able to generate rapid continuous motion with more efficiency than a spring-type actuator [6-8]. 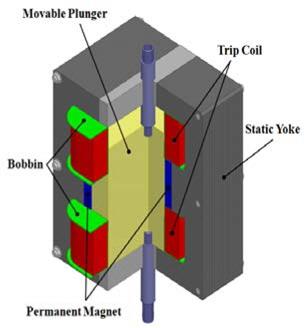 The response surface method (R.S.M.) is an effective statistical technique that can be used to improve the performance of electrical devices, enabling the easy development of objective functions and the reduction of computing time [9, 10].

As most types of electric machines have many design parameters, it is often necessary to search extensively in order to determine which particular variable most affects relevant design results. Because the R.S.M. is generally used to optimize two or three design variables [11], design of experiments (D.O.E.s) for seven design variables can be developed using tables of mixed orthogonal arrays to assess large numbers of design variables and their levels effectively [12], with a response value for each parameter combination calculated by means of finite element analysis (F.E.A.). Using the R.S.M., the D.O.E.s according to tables of mixed orthogonal arrays are analyzed. A Pareto chart can be used in order to find the design variables with the largest effects on the response function [13]. The P.M.A. design optimization process proposed here is aimed at minimizing the weight of the P.M. at improving the dynamic characteristics of an initially designed P.M.A.

This paper describes a dynamic characteristic analysis of a P.M.A. using coupled finite element method (F.E.M.) and the design optimization of the P.M.A. using tables of mixed orthogonal arrays and the R.S.M. Using coupled F.E.M., electromagnetic and mechanical characteristics such as the holding force and the action complete time are calculated and used as response values for P.M.A. design optimization. In order to verify the validity of the F.E.A., the calculated dynamic characteristics of an initial P.M.A. model are compared with no-load test results. Finally, the optimal P.M.A. model designed by using the R.S.M. is compared with the initial P.M.A. model in order to verify the validity of the optimally designed model.

The force characteristics of the actuators used for driving a vacuum interrupter (V.I.) are shown in Fig. 2 [6, 14]. It can be seen that the V.I. requires a high level of thrust at the end of stroke. Although the spring actuator produces high levels of thrust in the initial operation, this drops by the end of the stroke; in addition, spring actuators have complicated structures and face limitations to continuous operation. Although the solenoid actuator generates a similar force profile as that required by the V.I., this doesn’t reach the required force of V.I. at the end of the stroke [15]. By contrast, the P.M.A. matches the force characteristics of the V.I. closely during the initial operation of the stroke and also produces high levels of thrust at the end of the stroke, making it a more efficient V.I. driver than either the spring actuator or the solenoid. 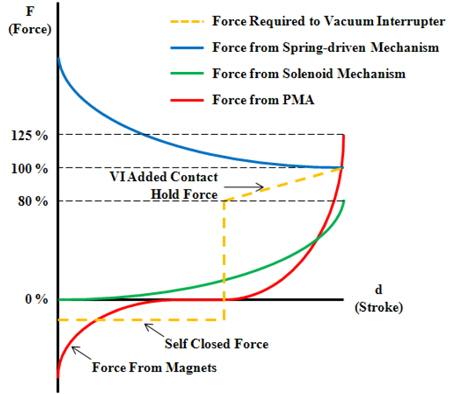 As shown in Fig. 3, the P.M.A. model used in this study consists of trip coils, plunger, yokes, and P.M.s, which are placed in the center of the P.M.A. between the yoke and the plunger. The holding force generated by the P.M.s maintains the position of the plunger. At that time, when an excitation current flows in the upper or lower coil, the P.M.A. performs an open or close operation. The nonlinear B-H characteristic of plunger and yoke is shown in Fig. 4. 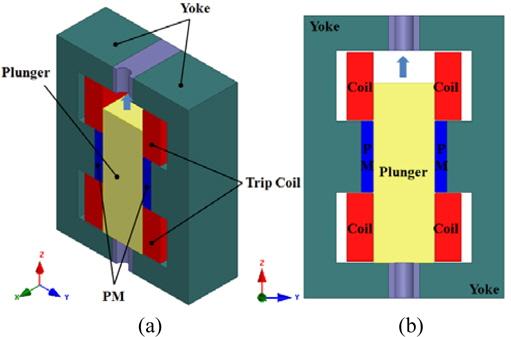 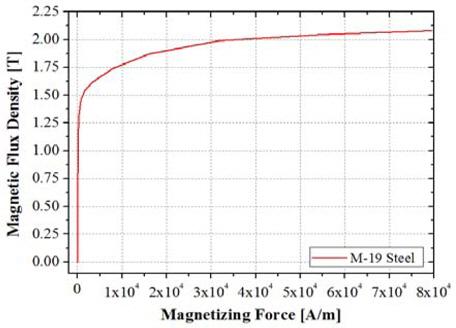 Generally, a P.M.A. can be adequately represented in a mathematical manner through the following three equations: (a) the electric circuit equation with voltage source, (b) the magnetic field equation for magnetic flux and energy, and (c) the equation of motion for velocity and force [5, 8, 16].

where, C is the capacitance of capacitor for the driving source [F], i(t) is the excitation current [A], R is the resistance [Ω], and L is the inductance [H]. The current density generated by the source capacitor and the P.M. are fundamental to determining the dynamics of the drive plunger, and the magnetic field equation for the P.M.A. is formulated as

where Fmag is the magnetic force [N], z is the motional direction [m], and v is the volume [m3]. This calculated magnetic force is used to build an equation of motion from which plunger acceleration, velocity, and position can be extracted; this is expressed as

4.2 Comparison of simulation and experiment

In order to determine the holding force, it is necessary to understand the distribution of magnetic flux density in the absence of excitation current. Using F.E.M., the magnetic flux density distribution can be numerically calculated, as shown in Fig. 5. In this figure, most of the magnetic flux flow occurs on the lower part of the P.M.A. model because the upper part has relatively high magnetic reluctance due to the air gap between the plunger and the upper yoke. With the plunger in the position show, the holding force calculated by F.E.A. is 7777.2 [N], which agrees closely with the value obtained from no-load test. 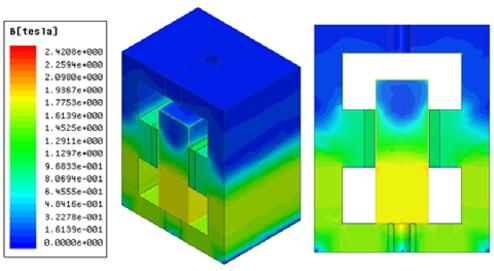 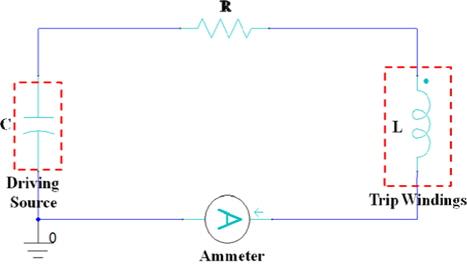 As seen in Fig. 7, the excitation current calculated from simulation is compared with experimental value of no-load test from t=0 to t=70 [ms] and the maximum excitation current calculated by simulation is 107.3 [A], which represents a pattern similar to the current wave obtained from the no-load test. Dynamic characteristic of the plunger was calculated using a coupled electromagnetic-mechanical F.E.A. Fig. 8 shows a comparison of the operating time between the experimental and the F.E.A. values. The plunger action complete time calculated by F.E.A. is 54.8 [ms], which shows good agreement with the experimental value obtained from no-load test. 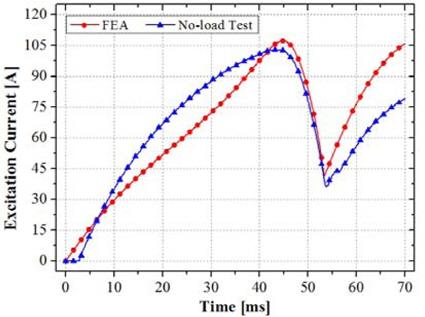 Fig. 7.Comparison of excitation current of simulation and no-load test 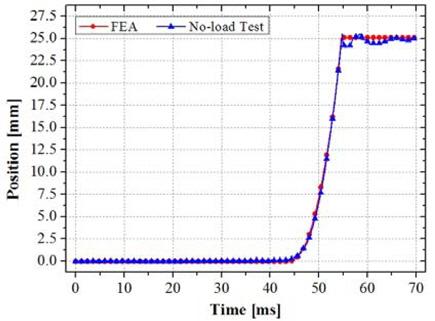 Fig. 8.Comparison of operating time of simulation and noload test

The dynamic characteristics of initial P.M.A. by F.E.A. are compared with the experimental results measured from no-load test and are shown in Table 1. This table summarizes the close agreement of results discussed above. The P.M.A. design optimization described in this paper is performed based on the results of F.E.A.

If a secondary regression model is used for function approximation, this equation can be re-formulated as follows [10, 18, 19]:

where, β represents the regression coefficients, the indexed x variables are the design variables, ε is the random error, and k is the number of design variables. The least-squares method (L.S.M.) can be used to predict the unknown coefficients. In matrix notation of the fitted coefficients and response model can be expressed as follows [11]:

where, is the vector containing the unknown coefficients. To optimize the design of initial P.M.A. model, we propose the optimal design process shown in Fig. 9. 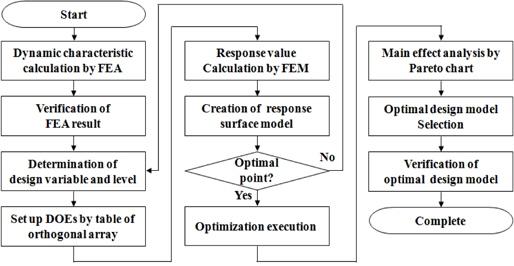 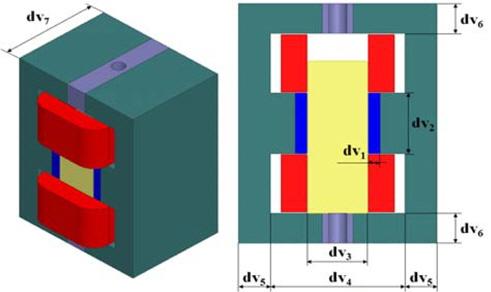 The mixed orthogonal arrays of D.O.E.s shown in Table 3, which represent design variables considered at each level and response values obtained from F.E.A., are used to perform an R.S.M. design optimization of the P.M.A. model. The response functions are the holding force, maximum thrust, action complete time, and P.M. weight, and the response values for each parameter combination are calculated by F.E.A. 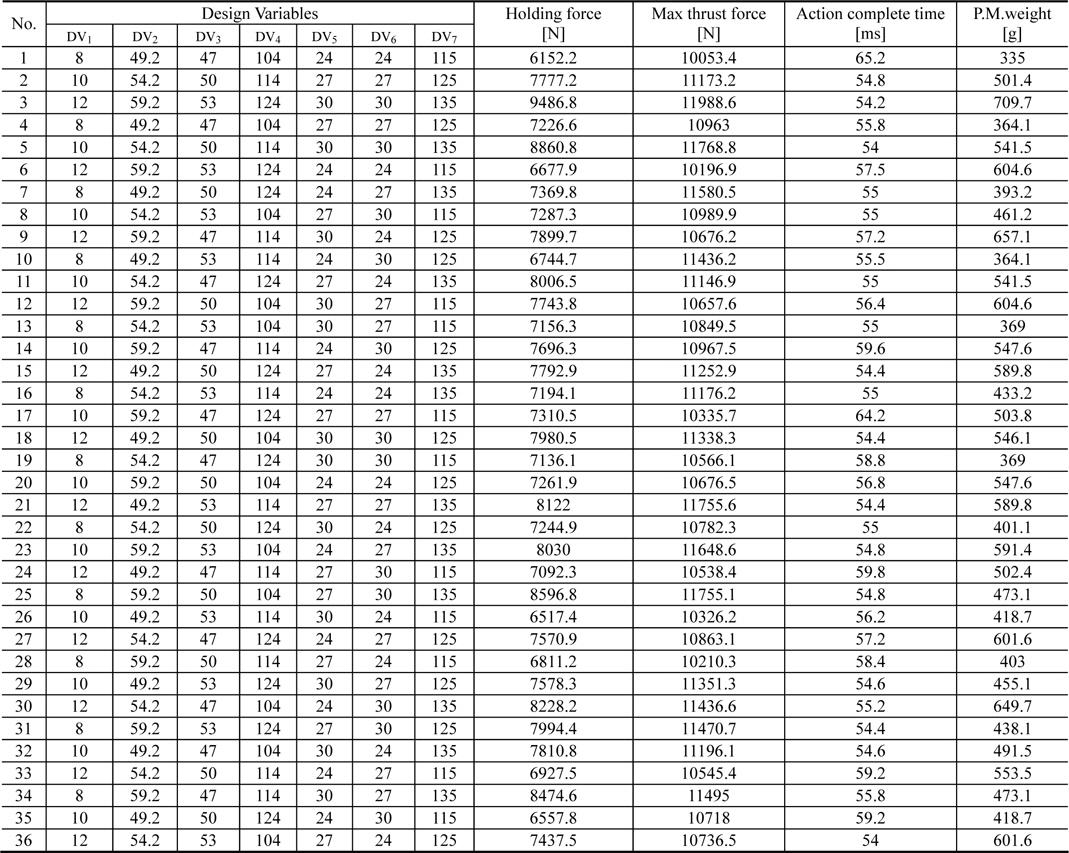 In order to visualize the impact of each design variable on the response function, the main effects of each function are represented with the analysis of variance (A.N.O.V.A.), as shown in Fig. 11.

In order to draw a response surface based on the experimental data from Table 3, the response function is extracted by the R.S.M. in accordance with the aim of this study to minimize the weight of the P.M. and to improve the dynamic characteristics of an initially designed P.M.A. In other words, the proposed P.M.A. optimal design process attempts to improve the action complete time (yT) while minimizing PM weight (yW) maintaining the holding force (yHF) and maximum thrust (yTF). The two fitted second-order polynomial response functions of seven design variables that result from this can be expressed as

The adjusted coefficients of determination of the holding force, maximum thrust, action complete time, and P.M. weight are 99.9 [%], 99.2 [%], 95.1 [%], and 100 [%], respectively, and the response surfaces for each response function are expressed using (8)-(11), as shown in Fig. 12, which shows the contour lines and optimal points for each design variable. 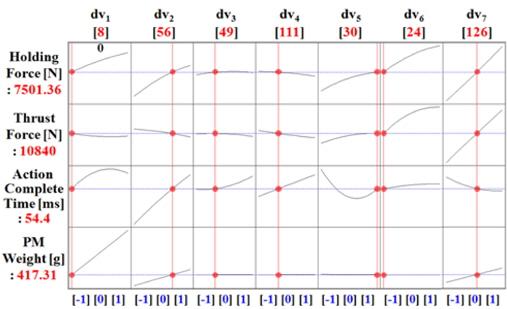 Fig. 12.Contour lines and optimal points around each response function 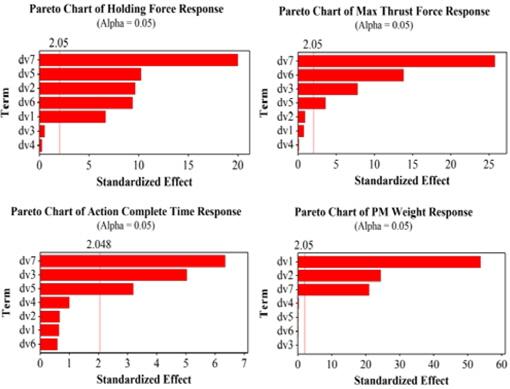 Fig. 13.Pareto chart of the standardized effects for each response function.

Dynamic characteristics such as the holding force, maximum thrust, action complete time, and P.M. weight are compared between the initial and optimal models in Table 5.

In this paper, a design optimization process to minimize P.M. weight and to improve the dynamic characteristics of an initially designed P.M.A. model was proposed. In order to verify the validity of numerical analysis based on coupled F.E.M. used in this process, the dynamic characteristics of P.M.A. were compared with experimental results from no-load test and show good agreements.